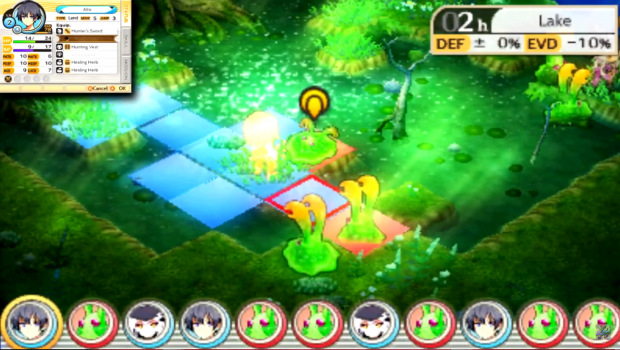 I had no idea what to expect when I fired up Stella Glow for the first time. I had no prior experience with the series it was connected to and outside of its anime stylings and promise of turn-based tactical action, I really didn’t know how much there would be to like.

To my surprise, I found myself immediately pulled into Stella Glow for hours (the better part of the first night really) until my 3DS’ battery started sputtering for life and the system had to find its way back to my charging station. Right then I knew that this game was a lot of fun. It was well paced, lovingly crafted, and although it wasn’t perfect, it was a damn far cry from bad.

So, what’s it about? Well, you begin and spend the majority of your time in Stella Glow playing the role of Alto, a young boy and the town’s best hunter. The desire to constantly increase his skills sends him deeper and deeper into the neighboring beast-infested forest, until eventually he encounters a mysterious stranger, a young girl singing alone.

Your first encounter with this character will lead to a great deal more than you will first suspect.

This meeting proves to be fateful in more ways than one, and soon places Alto on a path to find, recruit, and protect the four scattered elemental Witches of the Regnant kingdom and bring an end to the villainous Hilda and her bloodthirsty followers, the Harbingers.

I could go into more detail, but the large majority of Stella Glow’s plot is interlaced with the action. These characters, places, and choices all exist for a reason, and considering its length and general design seem to cater to more than one playthrough, it’s best for you to discover these things yourself if you really want to enjoy the game.

Now if the basic plot of Stella Glow doesn’t intrigue you, don’t worry, it’s not really trying to. After all, many of your most traditional anime and JRPG tropes are in full attendance, from the harem of female characters who surround our protagonist, to the idolized power of pop music and its ability to bring mystical prosperity. However, what might surprise you is how well these elements are pulled together without stumbling over themselves and degrading into drawn-out yawns, decorated with illustrated dialogue slides and random fights. Stella Glow’s action beats and exposition just have a knack for feeling very deliberate and purposeful, and as the game continues to expand and more features unlock, this balance keeps the title feeling fresh and engaging for a while.

Alto is in every way your traditional JRPG protagonist. He’s anime hero handsome, modest and naive in all things not related to martial combat, and almost solely defined by his iron will. No matter how you play him, very little of this will change.

For example, a few hours into your adventure, you will have your first real party containing your traditional tank, rouge, fighter, and healer units. Your first engagement is largely driven by the narrative, making it hard (but not impossible) to screw up and get wiped out. As you attack and best your opponents, various indicators will pop up revealing that you’ve satisfied various conditions to win additional rewards when the battle concludes, such as First Strike, or complete an operation without a certain character taking damage.

This immediately adds a new layer to story driven fights and random encounters as you begin to experiment with what new achievements are waiting to be discovered and prizes remain to be claimed. Depending on how lucky you get or how cleverly you carry out an assault, you may earn boons that make your next encounter that much easier.

Battles can range in difficulty depending on well you’ve prepared and how well you adapt. But don’t be surprised if stronger opponents start using some of your favorite tactics against you.

Another hour or so in, you will learn about the Destiny Clock, Free Time, and Mission time.

The Destiny Clock is basically a counter that toggles between when you are able to engage in story battles and random encounters on the world map (Mission Time) and when you can speak to other party members,take on odd jobs, and build relationships that unlock special abilities (Free Time).

This may seem pretty straightforward but eventually, when you feel like you’ve gotten the gist of the different Time’s various ins and outs, you’ll have learned that each vendor and character have their own rhythm and that you only have so much time to speak to certain people and build certain derivative stats. Your social strategy matters just as much as your battle tactics, and it will take some patient consideration to find a balance that leaves you satisfied when you’ve exhausted one of your two segments.

When all of your allotted Mission and Free Time markers have been used, you move to the next chapter of the game and story, and so on and so forth until to face the final conflict.

There is a magic in how well Stella Glow paces its combat and social mini-games that can only be attributed to the developer’s experience and talent. Imageepoch is really showing their stuff here, orchestrating a well-crafted RPG that veterans of this genre will definitely appreciate and newcomers will find inviting.

The story of Stella Glow focuses on its cast of characters almost exclusively. While this sometimes diminishes the depth of the world, it does make all of your interactions with both friend and foe more engaging.

The only place where things really seem to get shaky in Stella Glow is when the games overall style grates against your personal taste.

When you battle villains or monsters in Stella Glow, the camera is fixed, filling the various maps with numerous and obvious blind spots. While this is something that you can adapt to eventually, there are some difficult battles which will leave you screaming “none of this would have happened if I could’ve seen right there!”  For some tacticians that can be considered a part of the challenge, and I would agree, except when combined with the slightly capricious nature of the game saves.

Saving your progress in Stella Glow can only be done when the game either prompts you at predetermined narrative junctions or from Alto’s Room, a single location on the map. There was one time when I was engaged in a fight that, I admit, I wasn’t as prepared for as well I could’ve been, and it became a bit protracted. One map lead to a second map, and that second map lead to (or back to depending on how you look at it) a third map. Sometimes during these longer battles, the game offered me an intermittent save to avoid nosebleeds and rage quits when things went sideways, but this time no such offer was made, and when things eventually did go belly up I lost nearly three hours of gameplay.

This wasn’t the only time such a conspiracy of misfortune got the better of me, and it was silly things like these haphazard save issues, occasional out of whack victory conditions, and other nitpicks that soured my overall experience. None of them were big problems on there own, but under the right conditions they could snowball into really bad times that the game just wasn’t robust enough for you to find a reasonable work around. With only a couple of manual save slots to boot, a few bad tactical decisions can really prove costly to an entire leg of your adventure.

The tide of any battle can turn drastically if you underestimate your opponents before you really understand them. High levels and powerful weapons can quickly prove meaningless if you fail to account for your environment.

There was one escort mission of sorts which proved so challenging that the only way I could get past it was by spending four days power-leveling my entire party at home and during lunch breaks at work, until they were 5 levels higher than what was required to stand chance. Since your characters only gain experience by damaging, killing, or successfully performing support  actions in combat, that was a lot of empty grinding time branded into my thumbs which Stella Glow had previously not forced me through.

But taken all together, Stella Glow is a title I am proud to have in my collection and has made me interested in the previous entries in the Luminous Arc series. The English voice acting is largely tolerable and heralds some real points of believable emotional inflection. The Japanese Pop music numbers have personality and energy, and the graphical quality and cinematic combat sequences hit or exceed what you would expect for a 3DS game.

This game is a solid piece of work, tailor-made by individuals who knew what they wanted to create and made it happen.

Stella Glow isn’t reinventing the wheel here, but to its benefit it’s not trying to. It’s trying to be a fun, engaging, and relatively brief tactical J-RPG that signs the end of Imageepoch’s tenor with a franchise they started. The story is anime-solid. The combat and social mini-games are enjoyable, and what few irritants the game does have are easily bested by any invested role-playing gamer. Stella Glow has a talent for keeping you engaged all the way through, which is a rare trait for the increasingly niche world of Japanese Role Playing games.

I've been a huge fan and critic of games and movies ever since I had a voice to speak about them. I love power and influence of great storytelling, interactive and otherwise, and now want to be more than just a consumer. My biggest strength in this regard? Almost every time, I'm fair all the time.
Related Articles: Stella Glow
Share
Tweet
Share
Submit