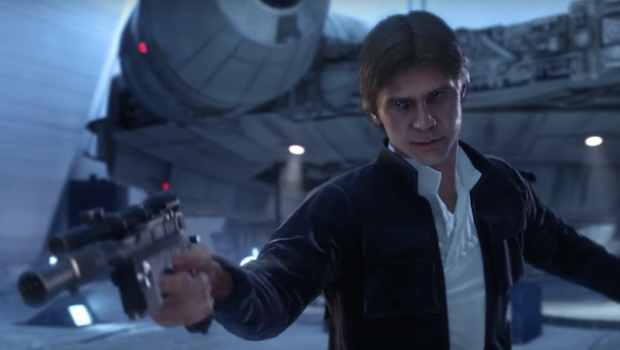 Nostalgia is a powerful tool. It signifies an emotional attachment to something, and that’s valuable in its own right. Games like Shovel Knight or Pillars of Eternity wouldn’t have happened if some didn’t hold a longing for the Good Ol’ Days. Nostalgia can also be a crutch, something to prop up an otherwise lackluster experience. Star Wars Battlefront precariously sits between those two, not quite relying on nostalgia, but rarely able to stand up without it.

Battlefront is the follow-up to the revered series of Star Wars shooters from the Playstation 2 era. Any game based in the Star Wars universe is going to inherently invoke some manner of childhood wonder from the base of twentysomethings or older who grew up on the original trilogy. Pandemic Studios has made the right choice in keeping it focused in that realm rather than dipping into the prequels.

When boots first hit the ground, the immediate takeaway is that this is not your typical Star Wars game. As the gritty realism of Saving Private Ryan was to the campier depictions of World War II, so is Battlefront to the depictions of war in the films. Lasers don’t just shine by in a bright, technicolor display of futuristic battles — explosions rock the ground, lasers rip through the air with velocity and force, and massive air battles loom just overhead, always threatening a sudden and unavoidable demise should an X-Wing decide to point its guns planetside.

Flying a TIE Fighter in a heated battle is fairly surreal, though flight controls are pretty messy.

It’s an unabashed spectacle, and exactly what Star Wars Battlefront needed to be. In visual and audio fidelity this game stands above most and is rarely found lacking. You have the option to play as one of many nameless soldiers on the ground (with a fair number of faces to personalize a bit), and power-ups allow you to enter the driver’s seat of one of the more significant forces on the field, whether that’s a TIE Fighter, speeder bike, or into the shoes of one of the six playable heroes: either Luke, Han or Leia for the Rebels, and Palpatine, Vader, or Boba Fett for the Imperial Forces.

Often my compulsion to play was to simply see more destruction and chaos. There’s nothing quite like watching an AT-AT come crashing down due to a coordinated assault, or being fried alive by the lightning of Emperor Palpatine. Heroes feel especially interesting, offering unique mechanics, like Leia’s honor guard spawns and Darth Vader’s Force choke ability, and spicing up the battle a bit.

But once that luster fades, the rust starts to show. It might be more prudent to say the lack of material in the first place, because rust implies something was there — where Star Wars Battlefront excels in the quality of its biggest moments, it lacks greatly in the quantity of them.

Beautiful vistas adorn the rims of every battlefield.

I keep levelling up with points, but those just turn into currency to meter out when I was allowed to buy new upgrades with other points. Grenades are now power-ups, an option you have to choose over equipment like jump packs and sniper rifles. New primary blasters are gradually handed out, but rarely feel different or unique beyond how long they take to overheat or how fast they fire.

Star Wars Battlefront seems hell-bent on adhering to the Modern Warfare system of progression, where perks become cards in a “hand” that you manage in games, supposedly offering player choice in playstyle, but really just limiting what can happen in-game.

The removal of the original class systems found in Battlefront 1 and 2 shows how vital those were to the core gameplay. Having unique units that each fill a certain role allows players to feel more defined, and to explore the intricacies of those classes further. There’s no anti-armor troops or Shadow Troopers here (well, except as a skin); you are a faceless grunt, and you’ll usually die in the same nonchalant manner as many other Stormtroopers did in the original trilogy.

Sullust is one of the new additions to the universe, a locale only barely mentioned in Return of the Jedi.

Beyond just a shallow offering of customization options, there’s a lacking amount of content for players to explore. While the wealth of game modes is varied and interesting, the actual maps and settings are not. The game contains four planets — Endor, Tatooine, Hoth and the rarely-explored Sullust — and each is broken into three subsections for varying game modes. In practice, these slices of maps often feel forgettable, as many of them lack unique characteristics or distinctive properties outside of “oh right, I’m on Hoth.” There’s no Cloud City, Kamino, and even Endor feels a little uninspired outside of a nice vista you get when spawning on the Rebels’ side of the map.

Nostalgia is a powerful tool, and it’s wielded as a double-edged sword in Battlefront. I’m endeared to the characters and settings I love, but the in-between can rarely sustain me to the peaks of spectacle. After a while, the illusion fades, and I’m left wanting something a little more meaty to come packaged with the game, rather than drizzled onto it over the coming year.

Star Wars Battlefront nails bringing home the original trilogy in a new and interesting way, but fails to substantiate the splendor in a meaningful way. A fun nostalgia trip that might barely tide you over until the new film, but not much longer.