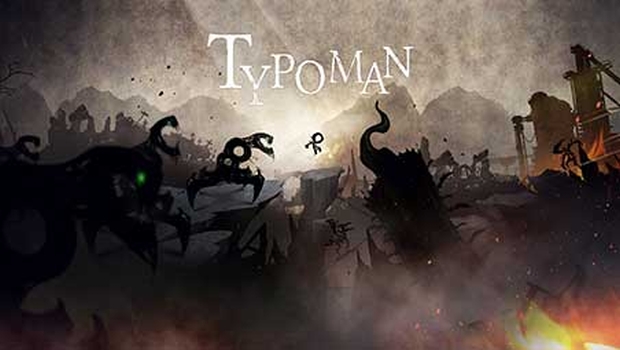 Typoman is a game about the power of the pen, the strength that words have, and what can happen to a society when that right is controlled or tampered with. It is a game that extols the virtues of expression, and even if it misses in the minutia, it still provides a unique experience.

The world of Typoman is powered by words, as letters can be picked up, dropped, pushed and pulled together to create phrases that change the world around them. You might need to cross a lake being filled by rain, so you swing a D into the word to form “drain” and drain the lake for safe passage. You might find a word that says “part” and approach it cautiously, only to find it was “trap” as it flips over and kills your hero. A well-placed S would force the trap to form “strap,” and the word would be imprisoned, allowing you safe passage.

There’s no shortage of unique moments like these in Typoman, the “a-ha” pieces of brief clarity where it all clicks and you pass on to the next puzzle. If Typoman was a game solely about clever wordplay, it might be a bit easier to progress through. But Typoman is also a platformer, with many sections where you must leap from platform to platform, hastily forming words and thinking on your feet, and that’s where the game falters quite frequently.

Words affect the world and change it, for better or worse.

The jump mechanics are not very sound, as often it was unclear when the hero would grab a ledge or when they would simply rub their cheek against it while falling to their death. The mechanics of moving letters do not lend themselves to hasty action either, as it’s a little cumbersome to form words even with the gamepad’s ability to move around individual letters within a formed jumble. The fact that the world does not pause while you rearrange letters becomes even more frustrating, as levels become less about what word I need, and rather the ways I could form a workable solution in the fewest moves possible.

The art style of Typoman is certainly compelling, but the dark black Courier font of the letters often blend with the background, making it difficult to find letters that I needed to solve a puzzle. This goes double for platforming segments, where often I leapt not knowing if I was going to land on something that was in the foreground or background. A bleak and disparate dystopia is certainly intriguing, but a little more distinction to make interactable objects more clear to the player would have gone a long way.

Jumps are often a guess rather than a certainty.

The story is conceptually sound, though it struggles to go anywhere particularly meaningful. I was more interested by the concepts and clever nuances than I was by the main narrative. Laser sensors literally censor your words, your guardian angel’s wings spell out “muse,” and there’s powerful ideas about mining letters for profit that felt unexplored in favor of a standard “hero saves the day against all odds” plot.

There’s not really any overly memorable music to speak of in Typoman, but rather ambient noise that keeps the grim mood alive. It’s actually a rather quiet game, with most of the sound coming from forming letters together and the occasional screech of an enemy. It isn’t really a detractor, as it keeps the theme of a dystopian, oppressed world alive, but even the few times I remember there being music, I can’t remember what any of it sounded like.

And that really reflects my time with Typoman. Moments of clarity punctuated an otherwise meandering experience, and I left feeling like a little more refinement and focus would have led to an otherwise better product. The team at Brainseed Factory was on to something, and I’m excited to see their sophomore attempt. As it is now, Typoman is a proof of concept that they have a bright future ahead, even if the current output doesn’t quite make the cut.

Typoman is a brilliant proof of concept muddied by messy mechanics, unclear prompts and a lack of meaningful motivation. While the wordplay is superb, the focus is never on that strength as often as I wish it was.