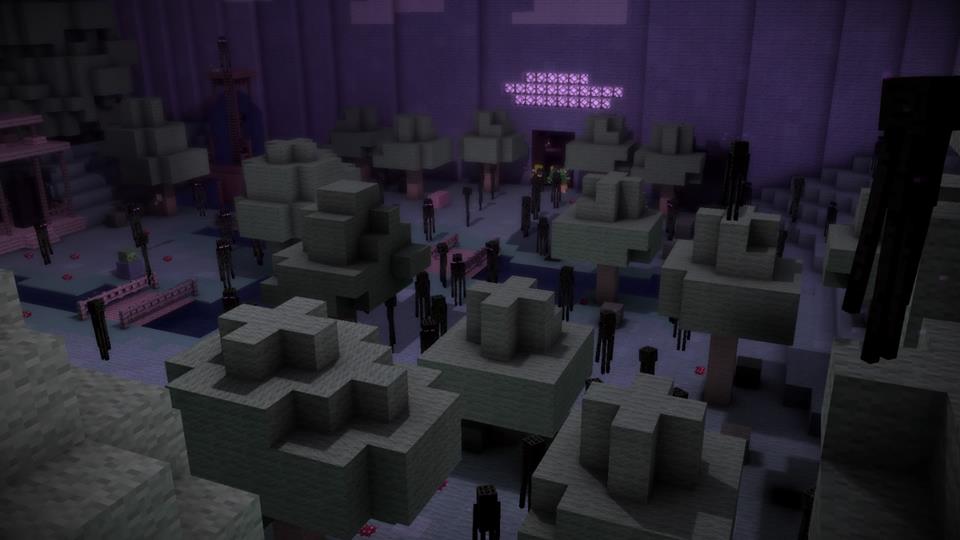 Minecraft: Story Mode’s third episode, “The Last Place You Look” meanders aimlessly through the world of Minecraft as if it’s meant to be a guided tour through parts of the series’ lore that Telltale hasn’t yet touched on.

Gone is the excellent, rapid fire pacing of Tales from the Borderlands, instead Story Mode takes strange turns in order to make obligatory references to things like Endermen and their home of The End, all while being strung along by a thinly spread story that breaks pacing in order to give players an all-encompassing look at the Minecraft world that, while continuing to show moments of cleverness, feels unfocused and lacking in direction.

After the abrupt cliffhanger of “Assembly Required,” Minecraft: Story Mode pushes Jesse and company into the deepest corner of the Nether, as tensions continue to run high within the group, albeit with little telegraphed reason. With Minecraft: Story Mode rolling out at a much faster rate than most of Telltale’s episodic series, it feels like characters are already on a set course that can’t be altered at this point, as almost everyone in Story Mode still comes off as small-minded and obnoxious. The choices in “The Last Place You Look” are again fueled by conflicts within Jesse’s group of impolite acquaintances, and every disagreement you have to settle feels just as childish as the ones that have come before it.

This arbitrary characterization is taken a step further, as characters suddenly pivot from friend to angsty rivals at the drop of a hat. Members of Story Mode’s cast that I thought I had an accord with were suddenly treating me with unmerited hostility, even when I’d taken their side on several occasions prior. We’re more than halfway through Minecraft: Story Mode and I still don’t know what I’m supposed to think of this cast when Jesse doesn’t seem to have a consistent rapport with any of them regardless of the decisions I’ve made and the support I’ve given.

While I would have originally said I could have relied on Story Mode’s narrative to remain a constant anchoring of these fickle people, “The Last Place You Look” ends on a note that left me wondering what Telltale’s take on Minecraft is even about. Twists and developments happen at the eleventh hour that leave the end-game of Story Mode in question, and are brought upon so abruptly that none of it feels genuine.

“The Last Place You Look” doesn’t do much to shift my viewpoint that Telltale’s time and resources could be better utilized elsewhere, but it’s made all the worse by the fact that, now more than ever, I am left with an even less clear picture of just what Minecraft: Story Mode is. The action sequences are more engaging and elaborate than they’ve ever been, but it’s all strung together by a story that lacks cohesion and characters who don’t know what they want. I’ve been waiting for the moment where it all comes together, but Story Mode still feels like a tour through the world of Minecraft sprinkled with manufactured drama.

Just what Telltale hopes to accomplish Minecraft: Story Mode remains in question as “The Last Place You Look” breaks story and characters for the sake of seeing every corner of the Minecraft universe.