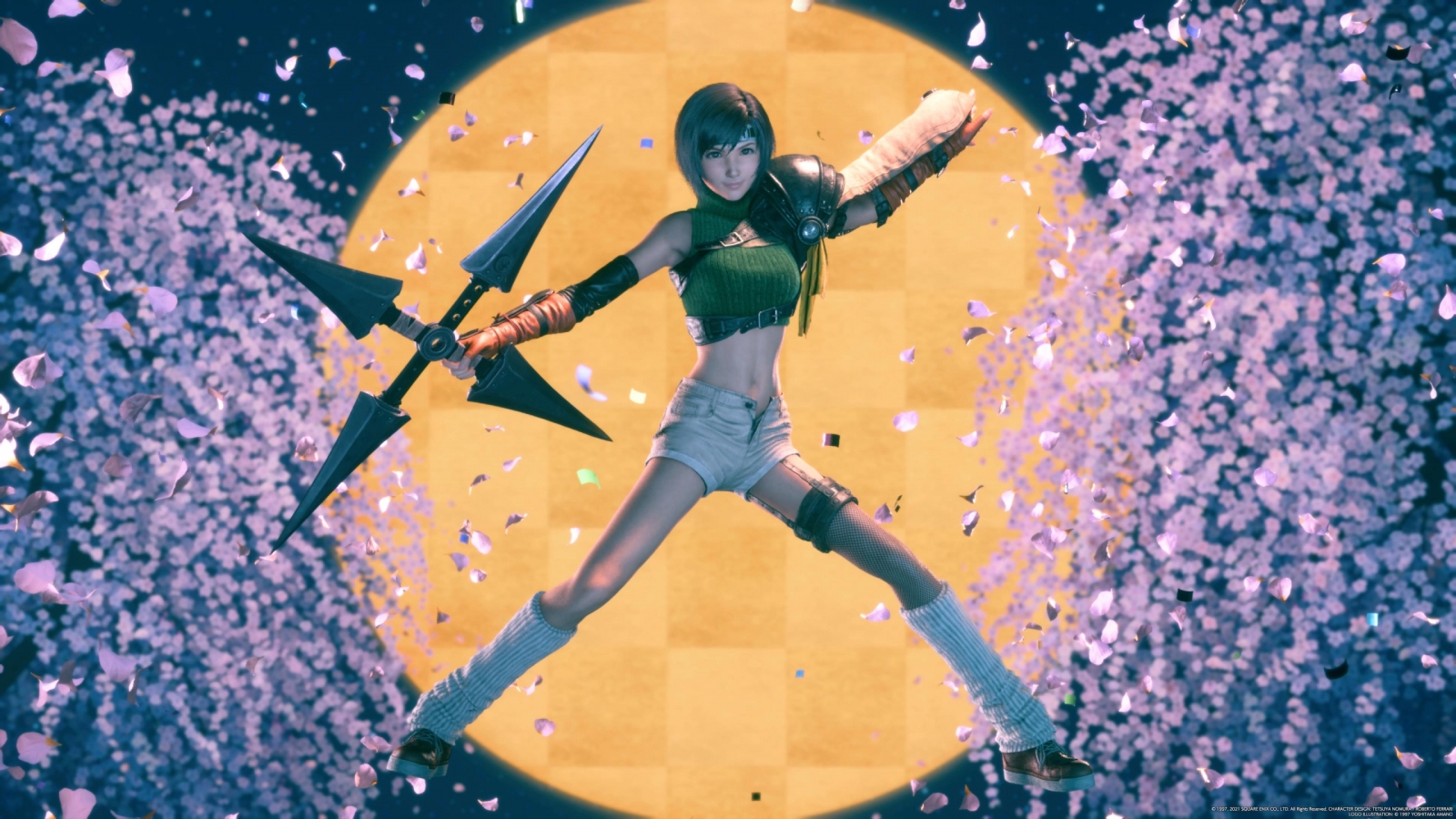 Final Fantasy VII Remake was one of my favorite titles last year, despite only having played the original recently. It’s story, while controversial, redefined what a remake could be and the combat was a satisfying combination of classic turn based RPGs and modern character action games. Despite the name, however, this is only part one of a series aiming to recreate the PS1 classic in its entirety, and we’ve still got a ways to go until the second entry. Enter Intergrade – a PlayStation 5 upgrade to the game improving visuals, with both a 4K mode and 60fps mode, and a brand new side story starring Yuffie Kisaragi. Is this a worthwhile upgrade for a game released just last year?

As our resident Final Fantasy VII expert, Kay Purcell reviewed the game back on PS4 and I largely agree with her opinion, so I’ll stick with what’s upgraded here for the base game. In our gameplay footage of Chapter 2, you can see both the Performance and FIdelity modes in action. I stuck with that sweet 60 frames per second for almost all of my time with the game, as it makes the combat feel much smoother than it ever did on PS4. While I haven’t replayed the entire game yet, I never noticed any dropped frames or slowdown even during the intense moments of the end game in hard mode. While the visuals are still improved in this mode (particularly some low quality textures have been enhanced), those who want the game to look as pretty as possible will gravitate towards the 4K resolution mode. To be honest, I really didn’t notice much of a difference here. I can concede that it looks ever so slightly better, like the tufts of Cloud’s hair look a bit fluffier, but I just don’t see much of a change here. The game is gorgeous either way, so I’d recommend the 60fps mode.

I hope you haven’t deleted the PS4 version from your console just yet, because you can upload your saves from there for use in Intergrade. If you’re like me and were in the middle of getting the platinum trophy for the game, a ton of trophies are going to pop when you download your progress from the title screen. Once that’s done though, you can resume wherever you left off seamlessly and quickly: loading screens are essentially gone here. Some scenes take longer to load than others, but going from the main menu to gameplay takes only a second or two. Of course, the “hidden” loading screens, like having to slowly squeeze through a gap to a new area, will take just as long as the original. Their purpose now moot, hopefully we’ll see less of this in further entries.

The last enhancement to the base game is the addition of haptic feedback using the DualSense controller. My colleagues and I have praised this feature in the past on titles such as Ratchet and Clank: Rift Apart and Returnal, but it hardly even exists here. As far as I can tell, it only appears during the motorcycle sequences, of which there are only two in the entire game. The adaptive triggers don’t feel good or satisfying there either, it just feels weird to have so little resistance pressing the accelerator or brake and that resistance disappears regardless after a few seconds of holding the trigger. Vibrating likewise is largely the same as the original, which I can live with since this upgrade is free for those who own the PS4 version (if you have a disc though, you’re PS5 will need to have a disc drive to upgrade). In the future though, I’d hope to see this implemented much better, like having triggers in combat have a sort of click to them to activate the command menu for party members. 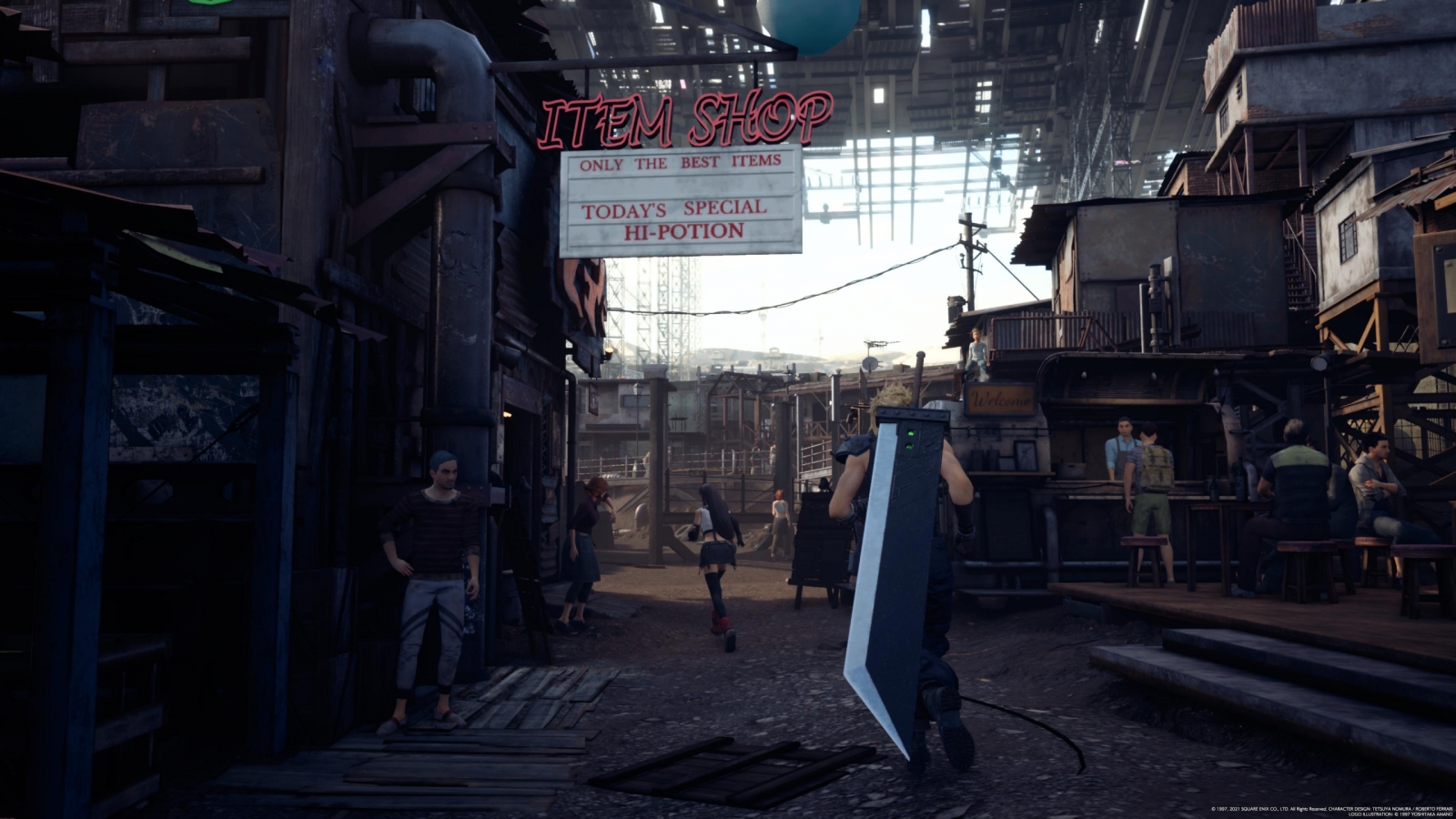 Now on to what we’re all here for, the INTERmission DLC. This can be purchased for $20 or is included in the Intergrade package if you’re not upgrading and is only for PS5. This side story follows the ninja Yuffie as she breaks into Shinra headquarters to steal their Ultimate Materia. Hailing from Wutai, she arrives in Midgar wearing an adorable Moogle cloak and heads to the Sector 7 slums to meet up with her partner for this mission, Sonon. You can watch the first 20 minutes in our gameplay video, which only shows a snippet of the plot to avoid spoilers.

While you can’t play as Sonon here, Yuffie is an absolute blast to control. Using her Shuriken, she can attack both up close or at range. Mashing Square will have her unleash a flurry of quick strikes to deal massive damage, while pressing Triangle will cause her to throw her weapon where it will continually damage a single foe for a short time. Yuffie is still formidable even without her weapon – her Square attacks in throw mode become magical Ninjutsu and pressing Triangle once more will launch her towards her shuriken to immediately begin beating up the enemy. It can take some time to master her playstyle, but once you do it feels incredibly fluid and satisfying, possibly even more so than any character in the base game.

Once Sonon joins your party, you can synergise with him by pressing L2 to begin attacking together at a small ATB cost. Using up a bar for each of them of the ATB gauge, the pair can use special team attacks which are enhanced versions of Yuffie’s abilities, the damaging Art of War and the staggering Whirlwind. This mechanic isn’t well explained in the tutorial, and it took me until the final boss to finally get a handle on it. Honestly, it’s not particularly useful outside of those two abilities. Yuffie is very fragile, so Sonon is best used as a tank to draw attacks away from her and he can’t do that when synergised. The most annoying thing about this feature is that you can’t activate it while the command menu is open, which lead to me frequently opening the menu, closing it to activate synergy, and reopening it to use an ability. I imagine this would be worse for players in classic mode (which can now be used in Normal difficulty or disabled on Easy). In great contrast to everything else about playing as Yuffie, it feels clunky and half baked.

Reaching the credits of INTERmission took me around 6 hours, a lot of which were spent doing side quests or playing the reimagined Fort Condor minigame. I found the original Fort Condor to be confusing and just weird, but this new version is so much fun. Now a board game played all across Midgar, your goal is to defeat your opponent’s birds while protecting your own. Each side of the board has three avians, and taking out the center one will instantly win you the match. Before playing, however, you need to choose your board type and pieces you can place. Your board determines how many pieces you have access to, what materia you can use in a pinch with L1, and the size of your ATB meter as well as how quickly it fills up. Your minions come in three, Pokémon-esque types: Red attackers, Blue defenders, and Green gunners. As their names and colors suggest, reds deal damage and are weak to blue who can take a lot of damage and are weak to green who can attack at range but are weak to red. As your ATB bar fills up, you can place pieces down and they’ll automatically begin marching towards the enemy and attacking. You can’t repeatedly place the same creatures though, as they rotate availability when used. It can be overwhelming to learn all the rules at once, but once you get to grips with it it’ll have you hooked. 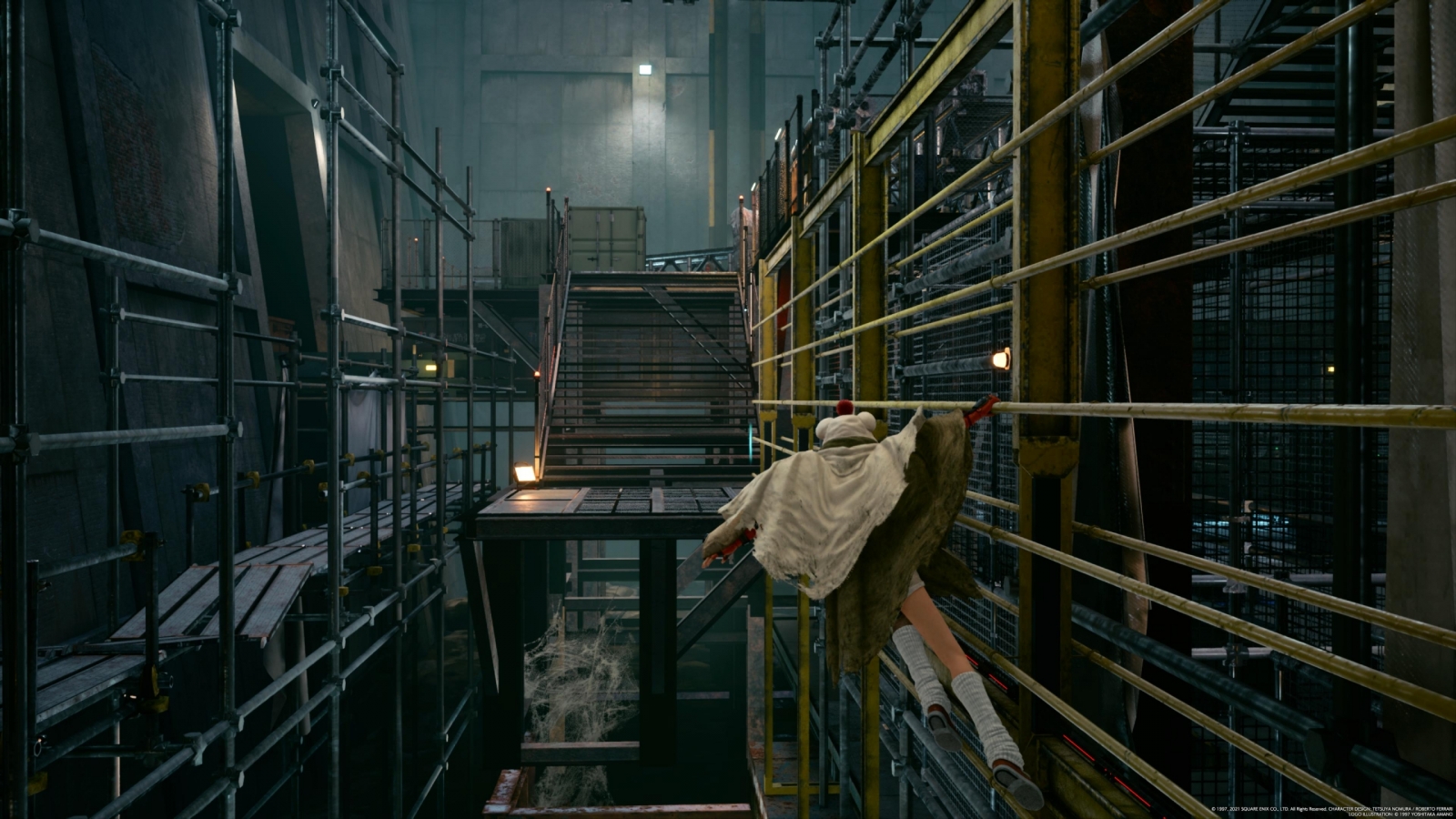 INTERmission comes in two, extra long chapters. Chapter one takes place entirely in Sector 7 and the brand new area surrounding it while chapter two sees Sonon and Yuffie infiltrating the Shinra building. The DLC is a little light on story, but I grew to really like Yuffie and Sonon’s characters as well as their dynamic. Sonon refers to Yuffie affectionately as “Boss” and the girl takes that role, well, about as seriously as you’d expect. (I.E. not at all.) There are some really funny moments between the two, Yuffie is generally adorable, and the game wraps up with a nice, emotional scene before checking up on the main party. Whether or not this is mandatory viewing for part two remains to be seen, but I suspect the main villains here will come back in some manner, especially since we know so little about them. In fact, it feels like I’m already supposed to know who they are for some reason which can lead to some confusion. If you planned on taking a bunch of pictures of Midgar using the photo mode, it’s a disappointingly limited feature as you can barely move the camera away form your character. Overall, this is a good enough package, but I don’t see why the DLC couldn’t have been on PS4 as well and aside from the 60fps mode there aren’t many enticing or worthwhile upgrades.

Intergrade is a decent upgrade to a fantastic game. While some of the new features like haptic feedback leave a lot to be desired, the INTERmission DLC is a blast with some truly incredible gameplay, music, and characters that makes this worth getting if you already own a PS5.

David is the kind of person to wear his heart on his sleeve. He can find positives in anything, like this is a person who loved Star Fox Zero to death. You’ll see him playing all kinds of games: AAAs, Indies, game jam games, games of all genres, and writing about them! Here. On this website. When not writing or playing games, you can find David making music, games, or enjoying a good book. David’s favorite games include NieR: Automata, Mother 3, and Gravity Rush.
Related Articles: Final Fantasy VII Remake Intergrade
Share
Tweet
Share
Submit