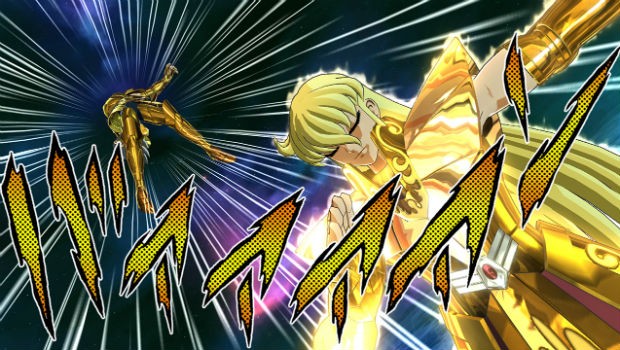 Fatal flaws are not a new pitfall for gaming developers, going back to the quite literal pitfalls of E.T. on the Atari and even further.  Not all fatal gaming flaws are quite as bombastic or historically bad as the previously mentioned one, but no matter how large or slight, all such flaws take a game and completely ruin any semblance of playability that it may hold.  Saint Seiya Soldier’s Soul, a fighting game based on the 80’s anime series Saint Seiya: Knights of the Zodiac, muddles around in a murky pit of fun and fast paced action and sloppy, frustrating mechanics.  The game also presents a new and unique fatal flaw to add to the ever expanding encyclopedia of gaming mistakes

Saint Seiya: Soldier’s Soul is a story driven fighting game very much in the same vein as the classics.  A storyline drives the characters forward, and the cutscenes are punctuated by fights.  Unlike classic arcade style story modes in fighting games, Saint Seiya presents the storyline as a single story with static events, rather than a gauntlet style tournament driven by an individual’s story.  There are four different versions of the story, all with different events and timelines.  Fans of the series may be familiar with the stories as they unfold, but newcomers will likely find themselves lost.

Another distinct difference is that instead of a single character, the story has you play as several different as the game sees fit. This is where the game’s problems first start to emerge. This can provide some variety in the matches and certainly gives you the ability to sample many characters quickly, but it simply takes away your ability to grow and learn with a single character while still enjoying a progression.  Saint Seiya restricts that to the single battle mode, and while that is a small fish in a large pond, losing that character “loyalty” is one less opportunity for the game to endear itself to you.

The fights are performed in a strange half-and-half perspective that forces you to view the battle from an angle.  It isn’t that bad, and provides a nice cinematic experience over more standard free-flowing or 2D styles.  There is an issue where perspectives can be confusing at some angles, but mostly the camera works.  However, when the perspective issues do arrive, or if you simply get turned around from being an inexperienced player, you will find yourself seemingly locked infinitum into a combo, and will be vulnerable to an onslaught of attacks every single time. This is frustrating to say the least, and it happens enough to be a serious impediment to winning.

This is compounded by the fact that these battles are tough.  We’re not talking just a few battles of learning curve here.  Saint Seiya puts you through several battles with extremely powerful opponents, and they often have crazy buffs that make them even more challenging.  There are no issues with the difficulty being unfair on its own, though, and the challenge results in some fulfilling victories. The challenge does compound the problems with gameplay, however, particularly when you lose a battle suddenly due to a perspective or combo lock issue.

Gameplay isn’t really broken or all that hard to master.  Where the problems lie are in severe monotony and lack of creative or varied attacks.  Characters have a standard and power attack and you combine the two in various strings to attack.  This doesn’t have much variance even when you mix up the string of attacks.  All of the special attacks are performed using a trigger and button, and there are three of them, period.  Once you’ve fought as a character a few times, you’ve seen pretty much all that they can do, and nothing is too hard to not try in the first battle or two.  This could potentially be why they chose not to allow you play as one character over and over again.

And thus we reach the point where Saint Seiya Soldier’s Soul loses all of the fairly small playability that it had with its legendary fatal flaw.  In a game where you do lots of fighting, and in those fights there are both problems that lead to easy deaths, as well as very challenging matchups that also lead to death on a regular basis, the best option would be to have a quick, simple, one-button restart option to continue along in the story. Saint Seiya Soldier’s Soul decided to do the polar opposite.

When you die, the voice of a female character comes out of the controller speaker, and delivers about 15 seconds of unskippable dialogue. Then, to continue, you have to tap X repeatedly until you fill a gauge, and you have to do this within 9 seconds.  The first time this happened, I was actually kind of intrigued.  I thought it was a very interesting and unique way to add action to the game. The third time, I was already tired of waiting and tapping X just to get back to the battle. After being defeated over and over, this simple mechanic made me feel a genuine hatred for the game itself.

This game does not have a lot of great reasons to continue to play and this terrible choice just strips any of the appeal that it may have had away and buries it in the sand. If you find that this isn’t the all-time nightmare that I found it to be, Saint Seiya does reward long-term play through the unlocking of various characters, stages, background musics, character models, special character “cloths,” and “assist phrases” that then can be purchased using currency earned in each fight.  Each character has various “cloths” that provide different visual styles as well as power levels, culminating with the ultimate Gold Cloth.  These and the other unlocks provide players with something to work towards, and is a very nice reprise from the microtransaction unlocks of some other fighting titles.

Characters can also be equipped with assist phrases, but full disclosure, I found these to be confusing and little answers could be found in-game.  The assist phrase gives the characters special buffs, but I couldn’t tell if there were automatic or if, as the name implies, I had to actually speak the phrase to make them work. If that is the case, that is simple insanity.  Some of these phrases are full sentences with like 12-13 words.  That is a lot to memorize when every character can have different phrases, and there can be up to three phrases on each character just from the start.  The game doesn’t say much about how to use these, with absolutely no mention in the tutorial.

The game can be played in the story mode, which is the bulk of the one-player action.  There is also an interesting advanced mode where you have gold cloth battles specific to one character.  While there are only three battles per character, this provides the more singular experience lost in the story mode.  Free battles are also available, as well as online matches.  Good luck finding a single opponent online for the most part, however, especially as time goes on.

Saint Seiya Soldier’s Soul is a quaint fighting game that has its small playability value robbed by a unique fatal flaw in the restart option that drags the action and frustrates the player. While the game has some interesting features, it mostly just drags through monotonous gameplay and a confusing story. Too many features are hard to understand, and while unlocking features, items, and stages reminds me of old school fighting games, the problems of Saint Seiya Soldier’s Soul makes the work to unlock them simply not worth the time and effort.

Patrick Rost has been with Gaming Trend since 2013. At first focused on sports coverage, Patrick has gone on to cover a wide range of games and other products for the website. Outside of Gaming Trend, Patrick writes and records music, grinds perpetually in Elder Scrolls Online (PS4), and lives day to day with his two dogs, Bob and Stella.
Related Articles: Saint Seiya Soldier's Soul
Share
Tweet
Share
Submit