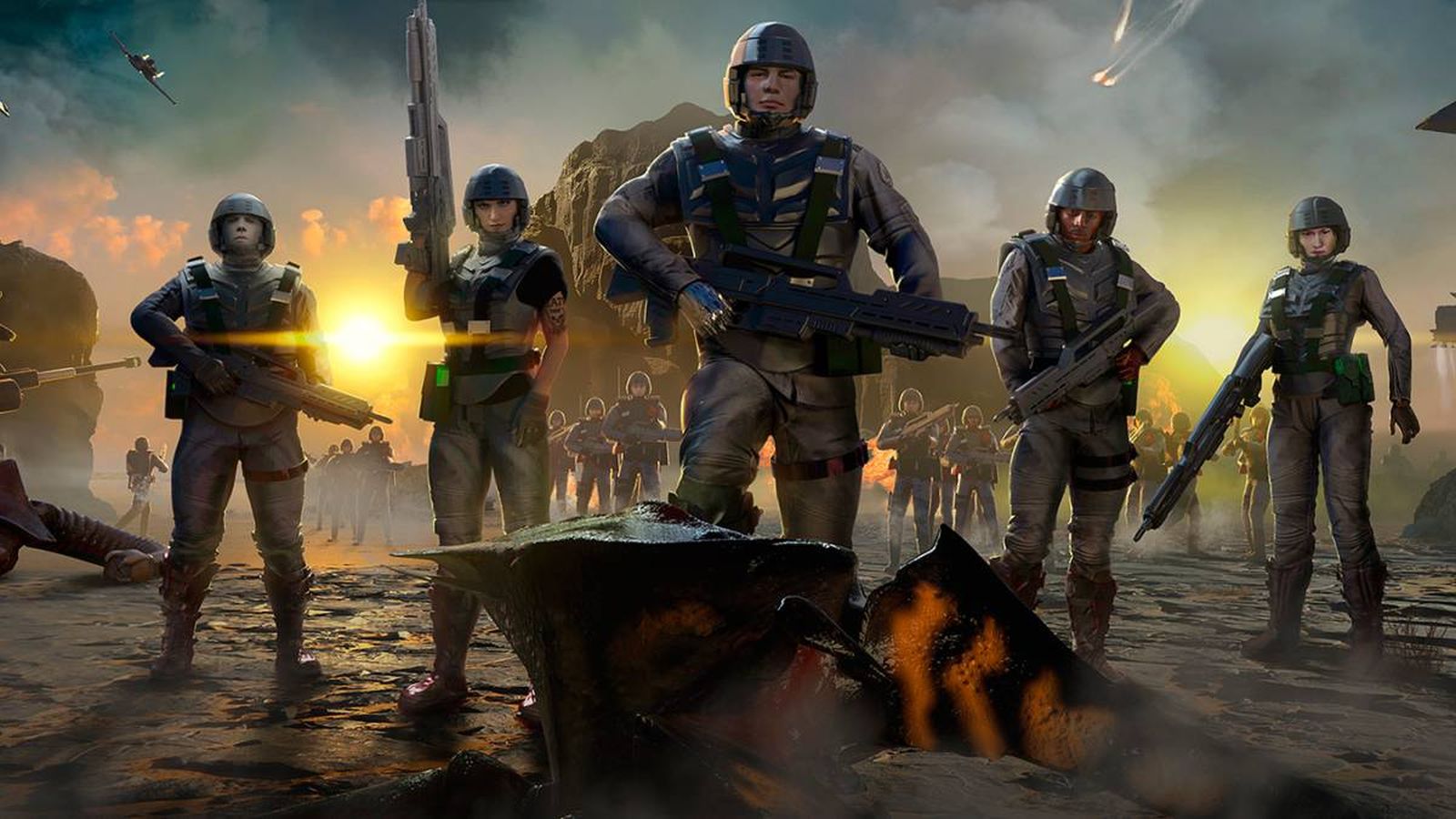 Starship Troopers: Terran Command will hit you differently depending on whether you read the incredible and eerie Robert A. Heinlein anti-fascist novel penned in 1959, or the Paul Verhoven satirically self-aware masterpiece of…well, anti-fascism. I highly recommend them both as they are wildly different, but Starship Troopers: Terran Command is based on Verhoven’s sardonic film. We break net now and take you live to Klandanthu, where the invasion has begun!

Firmly rooted in macho militarism and thinly-veiled political satire, the film’s opening is a battle on the bug planet Klendathu, aka “Big K”, as does the game’s tutorial mission. The remainder of the film is a mixture of training montage, war escalation, and concludes with the mission to capture a specific leadership caste bug in an attempt to “better understand the bug so we can kill the bug”. Starship Troopers: Terran Command picks up during that assault, ignoring the remaining films (and you should as well, they are terrible) and casting you as a commander of your own unit as you make a landing on the doomed assault. You’ll be hitting some familiar places across the ensuing 19 missions, but I don’t want to ruin any settings, so I’ll be as mindful as possible. Would you like to know more?

The story adopts the FedNet TV commercials that act as scene interstitials for the movie to deliver the major beats. In between missions you’ll get a slick, well-produced propaganda/news piece to pump up the public support of the ongoing war against the arachnids. Hitting the surface, you’ll take control of the titular Terran Command in progressively challenging missions to take the beating to the bugs. As such, it gives developer The Artistocrats the opportunity to show us what was only hinted at in the film. We see Rico get bopped out of the assault on Klendathu fairly quickly in the movie, but here we get to take it to the arachnids to its conclusion. Similarly, we defend a few places only briefly referenced in the movie, giving us the story behind the story. If you enjoy the ridiculous nature of Verhoven’s commercials, you’ll enjoy the over-the-top fun here.

In terms of combat, the game is a slow boil of new troop types over the course of 19 missions. Much of the challenge is figuring out which tools to use against what foes. Your basic Rifle Troopers will mow down Warrior arachnids by the score, but Tiger arachnids will eat them for lunch. Snipers take those out, and your Combat Engineer’s flamethrower will at least slow them down enough for Rifle Troopers to do the work. Scorpion arachnids are huge, and you’ll want Rocket Troopers to stop them. It’s a combination of paper, rock, scissors, strapped to a mechanic where finding the right placement and line of sight is far more important than how much meat you can shove into the grinder.

Making the kill boxes that you’ll use to ventilate bugs is some of the best, and occasionally most frustrating, parts of the game. When it’s working well, you’ll create carefully constructed kill boxes where your gunners blanked an area with crossfire as your Combat Engineers lay down flames in a nearby chokepoint. Those same Combat Engineers can also construct progressively stronger gun emplacements that can help you hold onto whatever ground you’ve scraped out.

Now, in the movie, Rico proudly says “They don’t mint stupid troopers!”, but I’m here to tell you that the troops I keep getting couldn’t rub two brain cells together to stay warm. Since friendly fire is very much a thing, expect your rocket troopers to obliterate your entire squad on more than one occasion. Similarly, your troopers will happily stand in white hot plasma until they burn to a cinder, screaming the whole time but doing nothing to alleviate the situation. This makes any encounter with a tanker more of an exercise in futility rather than tactics. I found that kiting the Tanker while the rest of the team hammers away at it is the best tactic. Grenades and rockets are really the only remedy for that situation, and they take forever to recharge, so you’ll be dancing for a bit.

The problem above seems to be directly related to pathfinding. Directing your troops to a position, and then halting them to launch their attacks works well, but fire and move is a roll of the dice. Sometimes sending your troops to assault a hive, for instance, will result in your squad obliterating that hive in a hail of bullets and fire. Other times they’ll snuggle up to the hive, stop firing, and watch mindlessly as they are all cut into so much soldier sashimi without reacting in any way.

I mentioned that the game unfolds over 19 missions, totaling about 20 or so hours of campaign. The first eight missions will be a walk in the park, practically tutorial level, but mission nine is a brick wall. Burning Skies asks you to keep rocket troopers alive as they are the key to taking out some of the stouter enemies. Well, strap in, because your idiot rocket troopers love to isolate themselves away from their protective details, leading to an immediate failure. Sure, you’ve been able to bring in additional rocket troopers in previous missions, and of course you’ve already unlocked two bases that could do exactly that, but apparently that’s a bridge too far. It’s as frustrating as it is pointless. There are 10 missions after this one, but this one was just frustration in motion.

Thankfully, while the difficulty ramps up, it’s not unwelcome. More and more tools will be added to your command, including the Power Armor (a mainstay of the book) and even Marauder Mechs – something we only see in the 3rd, and easily the worst, movie. You can adjust the difficulty for each mission, using a star rating from 1 to 5 stars, but the slider is little more than a math slider. It will make enemies do more damage and you do less if you go above 3, or more if you go with less than 3 stars. You’d hope that it’d adjust enemy density or troop health or any of the other switches and knobs, but Terran Command’s simplified system isn’t likely to compel trying a harder difficulty for a second run.

I was surprised to see that Starship Troopers: Terran Command lacks a multiplayer aspect, nor does it have a mission or scenario editor. There are a few pre-baked ones that the developers put together, but without access to tools, player content won’t be a thing.

The UI outside of the main game (e.g. any intel you gather on the bugs or your own troopers) is frequently what I’d call “developer art” – the placeholder stuff you put in until you’ve got something better. It’s often oversized, lacks more than the basic description, and bafflingly doesn’t even have a picture of the bugs in the lexicon most of the time. This is an area where the team could have done some work, but it’s clear they ran themselves out of time before an already-delayed launch.

You may read this and think I’m down on Starship Troopers: Terran Command…but I’m actually a big fan, and not just for my love of the film / movie subject matter. The roots of a very compelling self-aware satirical journey that juxtaposes the hoorah nature of the citizen-soldier against the fascist backdrop of a government more concerned with the opiates of the masses than anything else are present and accounted for. One mission asks you to intervene and re-capture a prisoner who needs to make his appointment for summary execution on live television. Verhoven was once quoted as saying he wanted to show audiences what a slick-veneered utopian right-wing state would look like in action, and even though the movie has little to do with the book, it’s something Heinlen demonstrated as well. Utopia, no matter what type, is completely incompatible with personal freedom. We also see this reflected in Starship Troopers: Terran Command, and it turns out that it’s actually a pretty fun romp as you obliterate wave after wave of pokey little bastards.

Perfectly encapsulating the Paul Verhoven film, Starship Troopers: Terran Command strikes the right balance of cheesy and challenging, at least in the latter missions. While it doesn’t have multiplayer or a scenario editor, the single player is a blast. We’ll fight, and we’ll win, I just wish my troopers weren’t so dumb while we do it. Oh well, more meat for the grinder.

Ron Burke is the Editor in Chief for Gaming Trend. Currently living in Fort Worth, Texas, Ron is an old-school gamer who enjoys CRPGs, action/adventure, platformers, music games, and has recently gotten into tabletop gaming. Ron is also a fourth degree black belt, with a Master's rank in Matsumura Seito Shōrin-ryū, Moo Duk Kwan Tang Soo Do, Universal Tang Soo Do Alliance, and International Tang Soo Do Federation. He also holds ranks in several other styles in his search to be a well-rounded fighter. Ron has been married to Gaming Trend Editor, Laura Burke, for 21 years. They have three dogs - Pazuzu (Irish Terrier), Atë, and Calliope (both Australian Kelpie/Pit Bull mixes).
Related Articles: Starship Troopers: Terran Command
Share
Tweet
Share
Submit