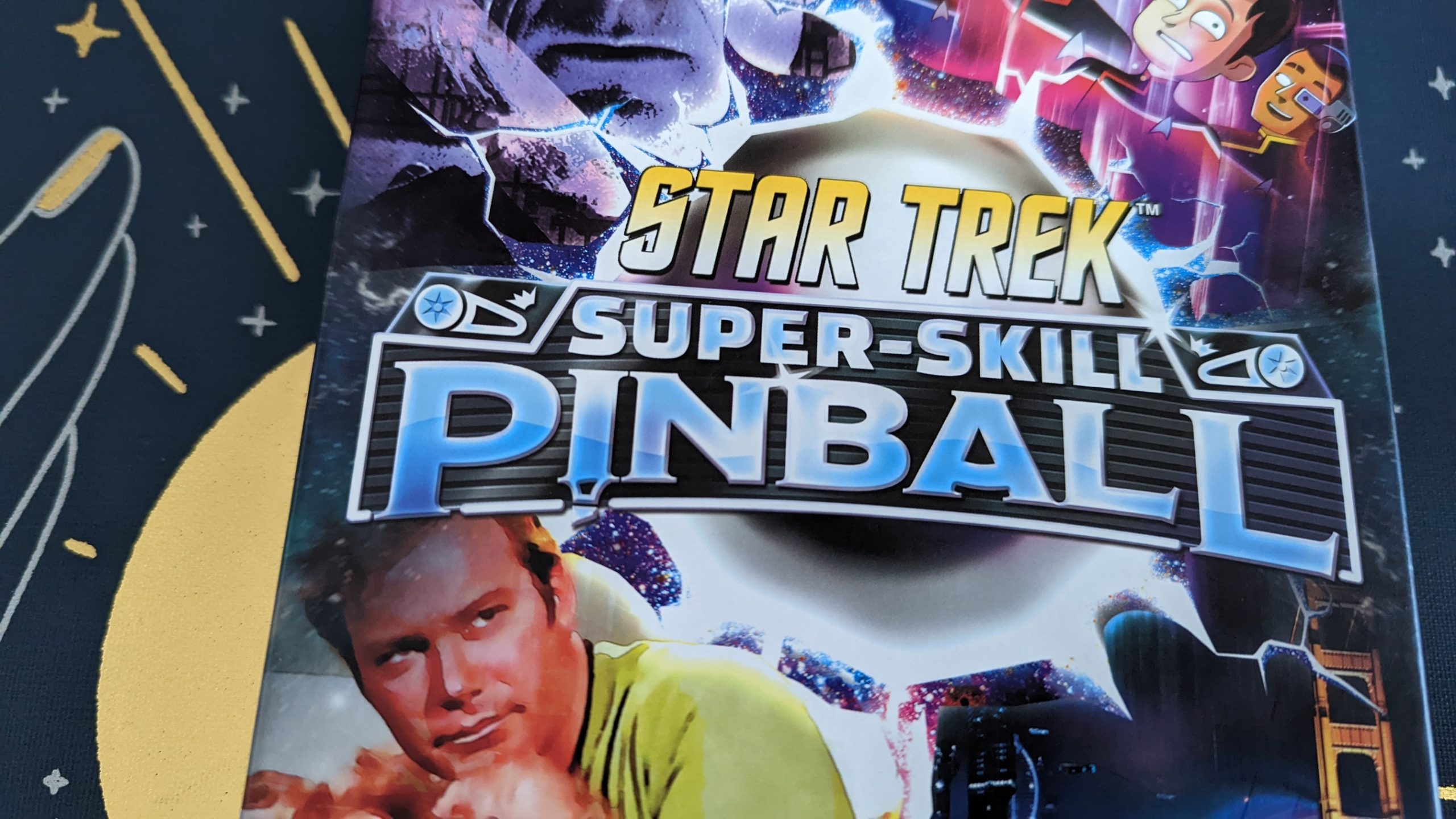 Last year, WizKids released Ramp It Up, the follow-up to their wildly popular roll and write Super Skill Pinball. I was extremely impressed at how the box fleshed out the idea of playing on the back glass from the dance fever board, essentially doubling the depth of the boards without necessarily doubling the complexity. Upon receiving Star Trek super skill pinball, I was cautiously optimistic, given how much I’ve liked this series so far, balanced with my wariness concerning licensed games. Turns out, I should have thrown my caution to the wind because this box knocks it out of the park.

I may as well start off with my one disappointment, Starfleet Academy. It’s essentially a rethemed Carniball with just enough minor tweaks to the mechanics to where I don’t feel comfortable saying I have eight copies of it now. Otherwise, I’ve been delighted by every other board.

The wrestling-themed two-player co-op board Pin Pals from Ramp It Up made me actually want to play with another person, but the Trouble With Tribbles board is the first one to make me want to play with the max player count of four. The main future of this board is the tribble track, where players will be getting the vast majority of their points by performing the balancing act of marking out as many of these spaces as they can without going too far, at which point they start losing points or even ending their round. That would be interesting enough, but the main way that players will be managing their tribbles is through the transporter feature, where they can get rid of as many of their tribbes as they would like and force the same amount on the other players. Now, do you really want to almost fill up your tribble track to get all those sweet points, as any activating their transporter will end your round? Spicy. 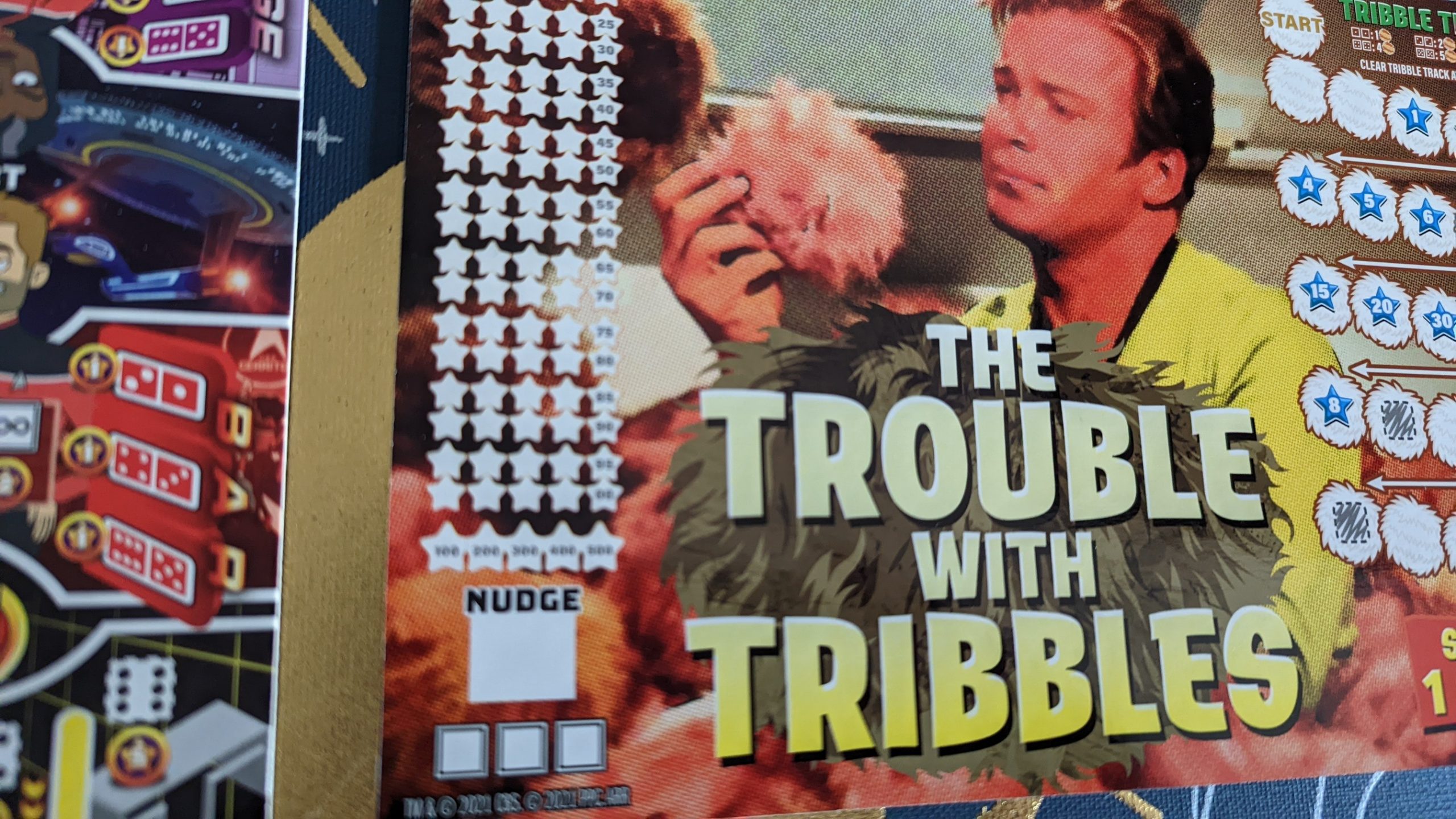 The Borg Attack board is arguably the most complex of the group, and takes the playing on the back glass idea from Ramp It Up to 11. For the first two rounds, the ball is going to be staying on the main board while you rescue civilians and recruit ships. Earn them with photon torpedoes, and set yourself up with various bonuses. Come the third round, throw your main board in the garbage because you’re only going to be playing on the back class your ball will bounce between recruited ships and the Borg cube, with The Borg using the dye that you don’t use to attack your ships. Once a ship has been hit twice, it explodes and you lose that ship as a potential place for your ball to bounce to. As this third round goes on the Borg cube will adapt to your attacks, making it harder for you to mark out certain spaces. I initially balked at the game requiring you to naturally roll your last successful attack to destroy the cube, but I realized that the tension created from this serves as a much better finale than a simple nudge or skill shot would have. 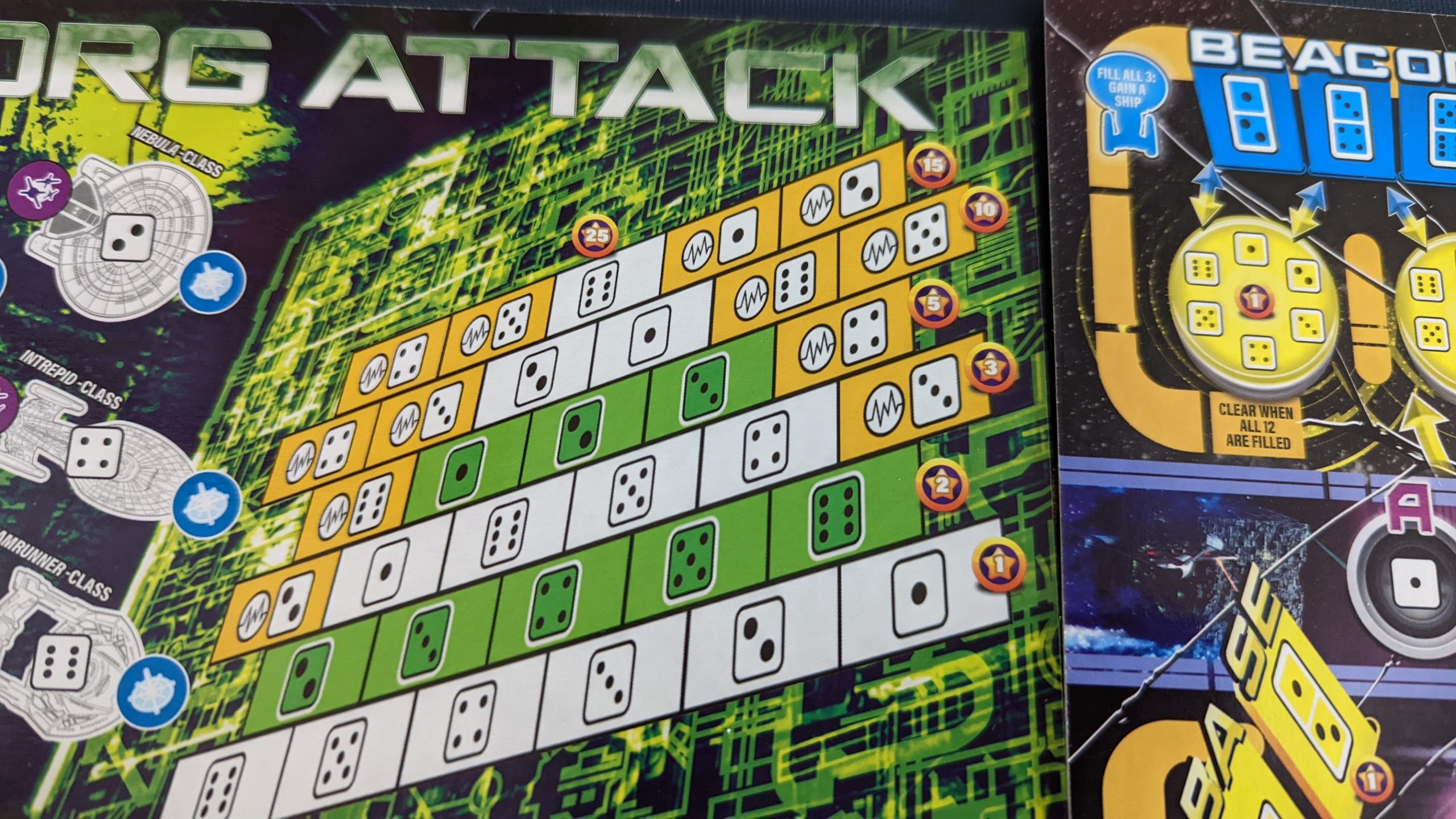 If they had left it there, Star Trek Super Skill would have been a solid entry to my favorite board games series, but Lower Decks is just an absolute gem. I got mad hype when I pulled the main board out of the box and saw that it had an extra set of flippers on top, and after some plays, that hype proved validated. Lower Decks’ core feature is that as you score points, gravity reverses, and you flip the board 180°. There are other things going on, like recruiting the show’s main characters, and working on feeling promotion bonuses to double your score, but they’re really sideshows to that gravity mechanic. Bouncing that ball by flipping the board as you rack up points is an absolute delight. As much as I’ve enjoyed my time playing Super Skill Pinball, Star Trek is my favorite entry by far.

Star Trek is the pinnacle of the excellent Super Skill Pinball series. The only thing keeping me from giving it a perfect score is one of its four boards being a licensed retread of a previous board.

Nick grew up reading fantasy novels and board game rules for fun, so he accepted he was a dork at an early age. When he's not busy researching the intricacies of a hobby he'll never pick up, Nick can be caught attempting to either cook an edible meal or befriend local crows.
Related Articles: Star Trek Super-Skill Pinball, Tabletop
Share
Tweet
Share
Submit