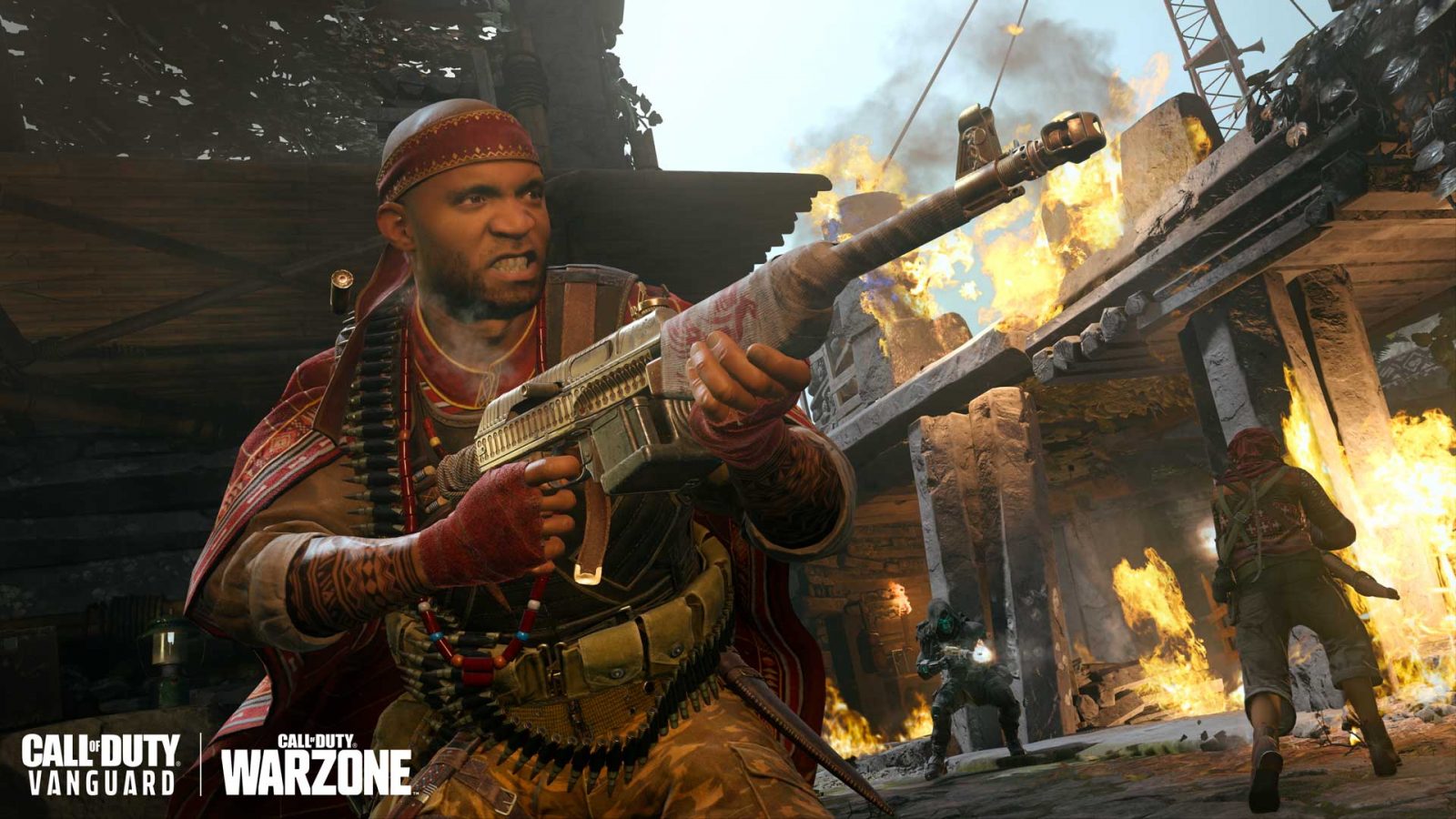 The new Call of Duty: Vanguard map, Desolation, will go live alongside Mercenaries of Fortune Reloaded on July 27th, 2022. To celebrate, the Call of Duty blog has posted a detailed map overview along with ten tips and tricks. You can read what the blog had to say below:

The battle for the Pacific grows ever fiercer. Welcome to Desolation, the latest Call of Duty: Vanguard Multiplayer map launching with the Mercenaries of Fortune Reloaded midseason update on July 27 Deploy to a labyrinthine village cut into the mountainside and outmaneuver your foes to take control of this invaluable listening post.

Visit our Mercenaries of Fortune Reloaded announcement blog for more info on what’s coming in the mid-season update to both Vanguard and Call of Duty®: Warzone™. Now, on to the mission briefing. 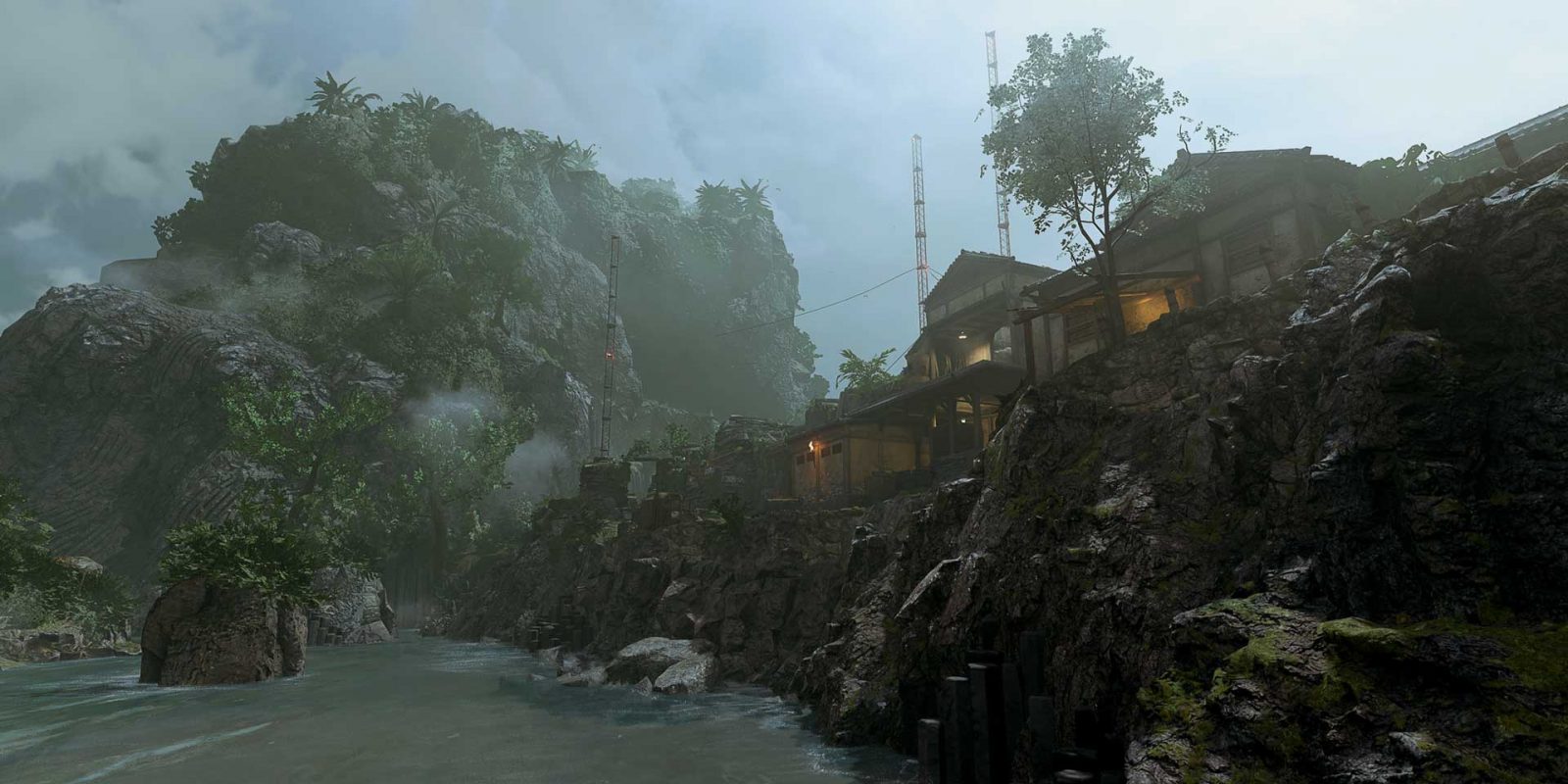 Though Desolation is a medium-sized map, its tight, mazelike layout results in plenty of close-range engagements. Within and between the various shanties and the listening post, you’ll find tight interiors, cramped alleys, thin walkways, and thick stonework, with plenty of right angles and mountable objects creating an atmosphere of high suspense as you anticipate enemy movement at every turn.

There’s opportunity here, too. Once you get a hang of the map’s intricate layout, all kinds of tactics open up. Equip a Shotgun and haunt the upper level, blasting away at enemy Operators above and below as you swiftly navigate the terrain in true parkour fashion. Take advantage of all the climbable objects here to dramatically expand your tactical capabilities.

Mid- and long-range Loadouts have their place here as well, though you’ll likely find more success after a few matches when you’ve got an idea of the key sightlines to take advantage of, particularly down the sides of the map and from certain vantage point such as the southeastern Hunters Overlook and the northern Roasting Pit. Consider Overkill for a close-range backup when you need to move, or be on the lookout for one on the ground to pick up and replace your Secondary Weapon.

There are many cover objects throughout — use them. You can still play aggressively while minding your defense in battle, utilizing the various stonework to absorb shots and keep you in the fight longer. Depending on whether you’re defending or pushing, you can then further entrench yourself in anticipation of the next fight or move on to the next elimination. 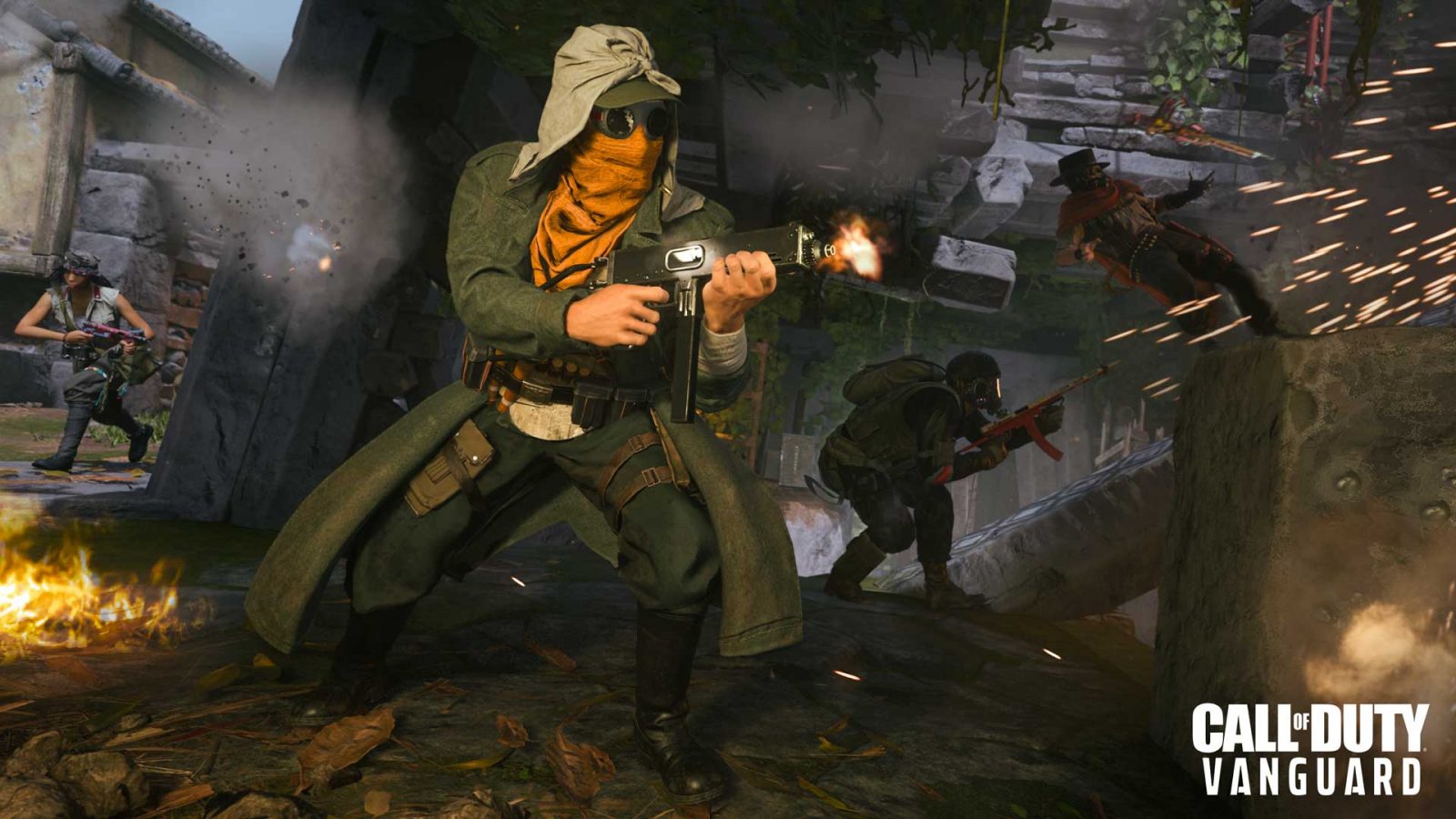 Mercenaries of Fortune Reloaded brings the new Vargo-S Assault Rifle to Vanguard. Unlock it by completing its in-game challenge or by acquiring its relevant Weapon Blueprint via Store Bundle. For Desolation, we’re kitting it out to excel in close- and midrange battles so that you have the flexibility to succeed no matter the situation.

Loadout: Near and Far

A veritable slayer, this Vargo-S configuration picks up several attachments with the focus of boosting the weapon’s Hip Fire Accuracy, improving its ability in close-quarters engagements. It won’t be as effective as an SMG, but flexibility is the name of the game, as you’re able to use the weapon’s high Aim Down Sights accuracy to nail targets at long range. And with 60 rounds per magazine, you can engage multiple targets before needing to back off for a reload.

Our Perk selection favors survivability and a low profile. In the twisting alleys and ruins here, you can bet that all sorts of traps await you. Engineer will help you spot and hack threats like the S-Mine 44, a Demolition Charge, and pesky Field Upgrades like the Jammer and Field Mic. With Ghost and Ninja, you can move around more stealthily, further boosting your ability to flank enemies from every direction before they’re even aware of what hit them. 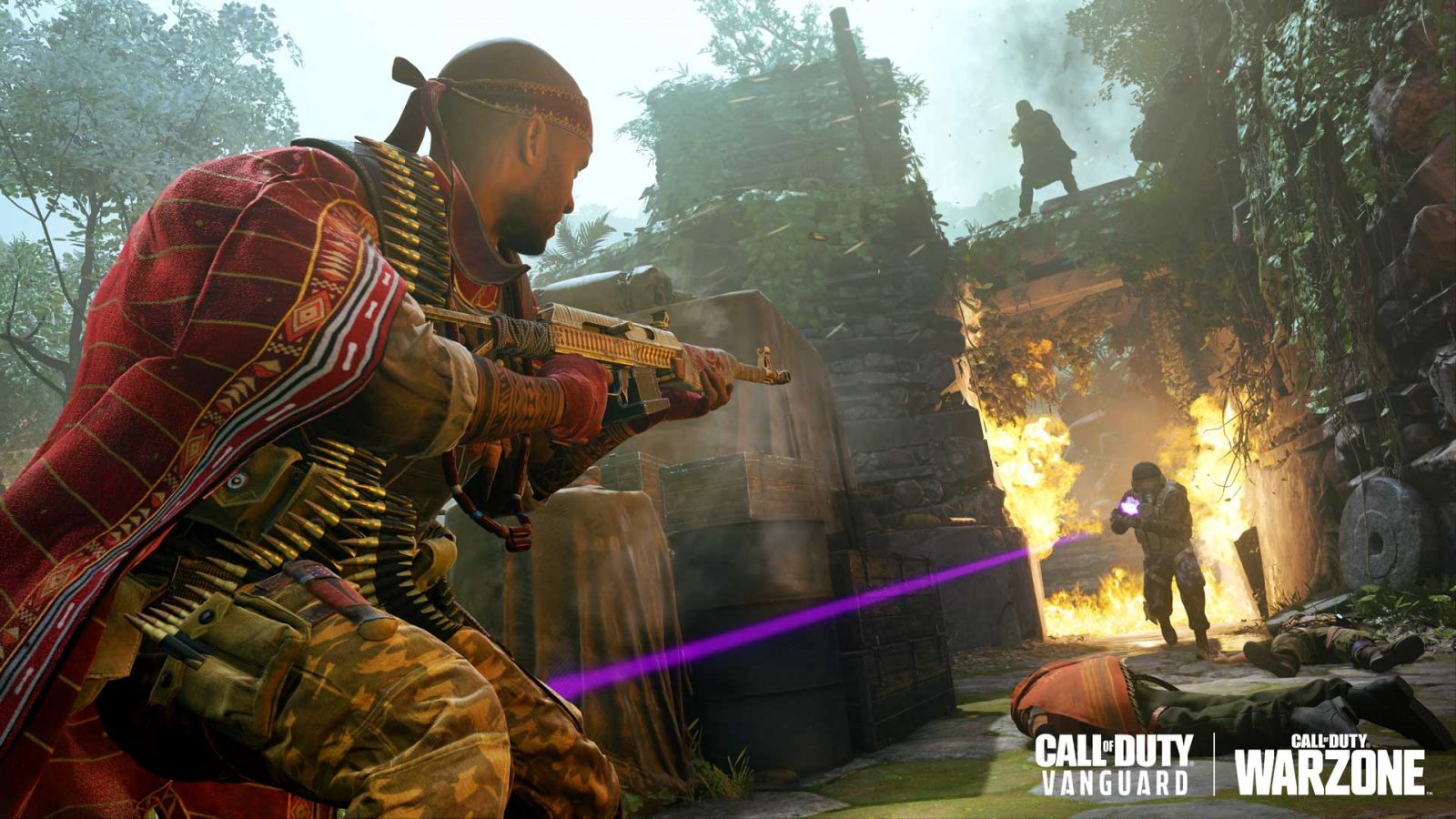 Controlled Chaos. At first glance, it may seem that enemy Operators are pouring in from every direction due to the map’s winding layout. With each subsequent match, however, the map’s intricate design will become more clear — until it’s you the enemy fears coming around that next corner. Keep at it and your map knowledge will pay off in spades.

Down the Sides. When you need to traverse the map fast but want to avoid the map’s inner maze, take the side lanes where there’s more predictability in the layout. The western path is particularly clear, so long as you’re prepared to encounter long-range resistance. When you do, move out of sight and force them to come to you or give up the kill.

The Ground Is Lava. Except for the southern tip of the map, it’s possible to stay aboveground throughout most of the environment via jumps and mantling across the stonework, walkways, and shanty rooftops. Not only is it fun traversing in this way, but it’s also a great means of avoiding the cramped alleyways and paths below.

Now You See Me, Now You Don’t. Desolation’s labyrinthine layout creates massive opportunities to relocate and confuse the enemy, making it difficult for them to track you down. Don’t hesitate to disengage from an encounter and either melt away when you’re outnumbered or move to new ground for a refocused effort.

Alleyway Ambush. If you’re willing to brave the lower levels, try taking up residence in the southern Shanty Alley or northern Temple Alley. These confined spaces offer the perfect ambush points to eliminate Operators moving away from the Central Ruins. Be on guard when approaching these paths to avoid falling prey to a similar fate.

Jammer in the Ruins. The Jammer Field Upgrade can be devastating here, especially around the Central Ruins where intel is so valuable in determining how to engage the enemy. Lay down a Jammer to scramble their minimap, keeping them in the dark until it’s too late to respond to your attack.

Bull’s-eye. Who needs a grenade when you can efficiently dispatch enemies with a Throwing Knife? It’s quick, it’s quiet, and it’s much easier to home in on your target in Desolation’s confined pathways rather than in the map’s wide-open spaces.

Shhhhh. Dead Silence can do wonders here, especially if you’d like to open up your Perk 1 and 3 slots to something other than Ghost and Ninja. The engagements here are fierce and frequent, so there’s a good chance you’ll be able to refresh its duration through gun, melee, and Throwing Knife eliminations.

Flamenaut in the Trenches. Why not aspire to greatness? Though it requires a hefty nine eliminations to acquire, the Flamenaut can be absolutely devastating on the ground level. Shoot flames into the Central Ruins and down the alleyways to scorch enemies and stop them in their tracks.

Area Denial. You can really mess up an enemy’s plans by denying them passage through key pathways. Consider equipping lingering Equipment like the Incendiary Grenade, Molotov Cocktail, and the MK V Gas. Use them to interrupt the enemy’s progress, allowing you to control the flow of the fight. When they attempt the same tactic, throw on the Dauntless and Survival Training Perks to counter their tricks.

Rise on every front.