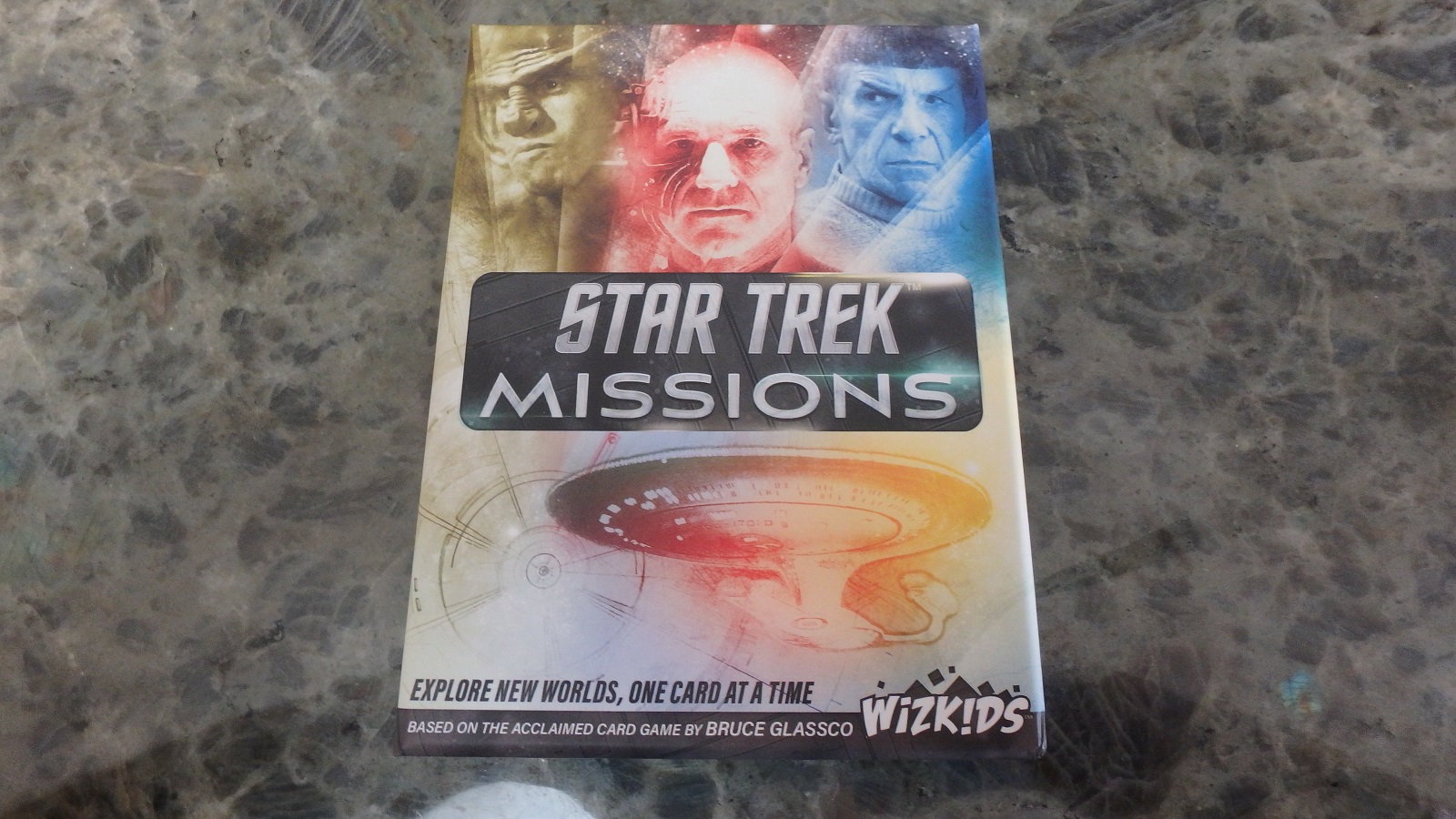 Back in 2017, Wizkids came out with Fantasy Realms, a shorter game about optimizing scoring on a hand of cards that have interesting interactions. While I enjoyed the game, it definitely wasn’t without its share of faults, and I decided against picking it up for myself. Five years later upon hearing about this new Star Trek retheme, I was quite excited, and hoped that in the intervening years they had found a fix for the issues I had with the original. I’ve played the Star Trek version several times now, and while they’ve certainly changed a lot, I’m not entirely sure all the changes are improvements.

Fantasy Realms and Star Trek: Missions are rather simple games. Every card will have scoring criteria, and on a player’s turn, they either draw a card from the deck and discard a card or pick up a card from the discard area and replace it with another. Once enough cards have hit the discard area, the game ends and players total up their hands’ scores, and the highest score wins. As you can probably guess, there’s nothing too complicated here, but it’s quick and fun.

The biggest, and most obvious, change to the game is the introduction of the titular mission cards. In Fantasy Realms, there was only one deck that everyone drew from. In Star Trek: Missions, cards are now separated into two decks: the galaxy deck, which functions in the exact same way as the original, and the mission deck, which players draw two cards from and then discard two cards from their hand. Since there’s only 24 mission cards in the game, players will be seeing a decent chunk of them each game, and I’m pretty sure that this actually hurts the game. The new format rewards knowledge of the mission cards and trying to match your hand to a mission or two, whereas Fantasy Realms originally was very much about just making do with what you get. 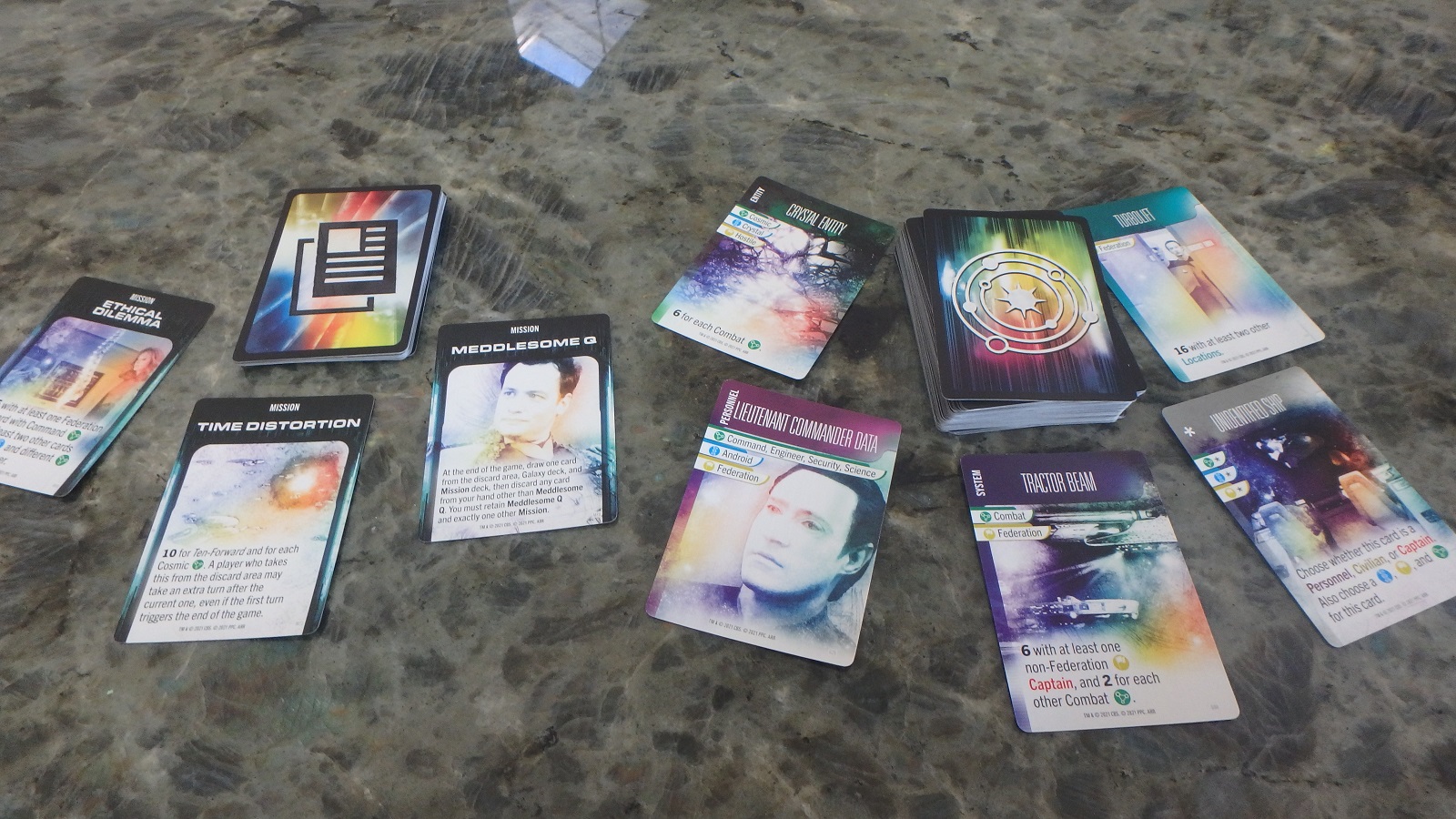 Star Trek: Missions also changes how cards score, or rather how that information is presented. In Fantasy Realms, every card had a base value, which was then modified by its text and interactions with other cards in your hand. This has been reformatted into every card’s entire value being dependent upon its text. I personally find this to be an improvement, since it decreases the total amount of inputs by half, but I have seen people say that they missed the base values, which made an easy reference for a general idea of what any card should be worth. Let’s call this one a wash.

The final change, and the reason why Star Trek: Missions is going into my collection and Fantasy Realms didn’t, is the retheme; not that I have any dislike for fantasy, or even particularly love Star Trek, being a Star Wars guy. The original had artwork that was frankly embarrassing. It looked like it was made to appeal to the demographic that complained about how the minors in She-Ra weren’t sexy enough. Unsurprisingly, the Star Trek: The Next Generation stills they used absolutely flatten the cringe-o-meter, and personally, that’s all I needed to find space for a Fantasy Realms game.

Star Trek: Missions doesn’t change too much from its predecessor, and I honestly think that the addition of the mission mechanic actively detracts from the experience. However, moving from the hyper sexualized artwork in Fantasy Realms to stills from The Next Generation is all I really needed to love this game.

Nick grew up reading fantasy novels and board game rules for fun, so he accepted he was a dork at an early age. When he's not busy researching the intricacies of a hobby he'll never pick up, Nick can be caught attempting to either cook or befriend local crows.
Related Articles: Star Trek: Missions, Tabletop
Share
Tweet
Share
Submit