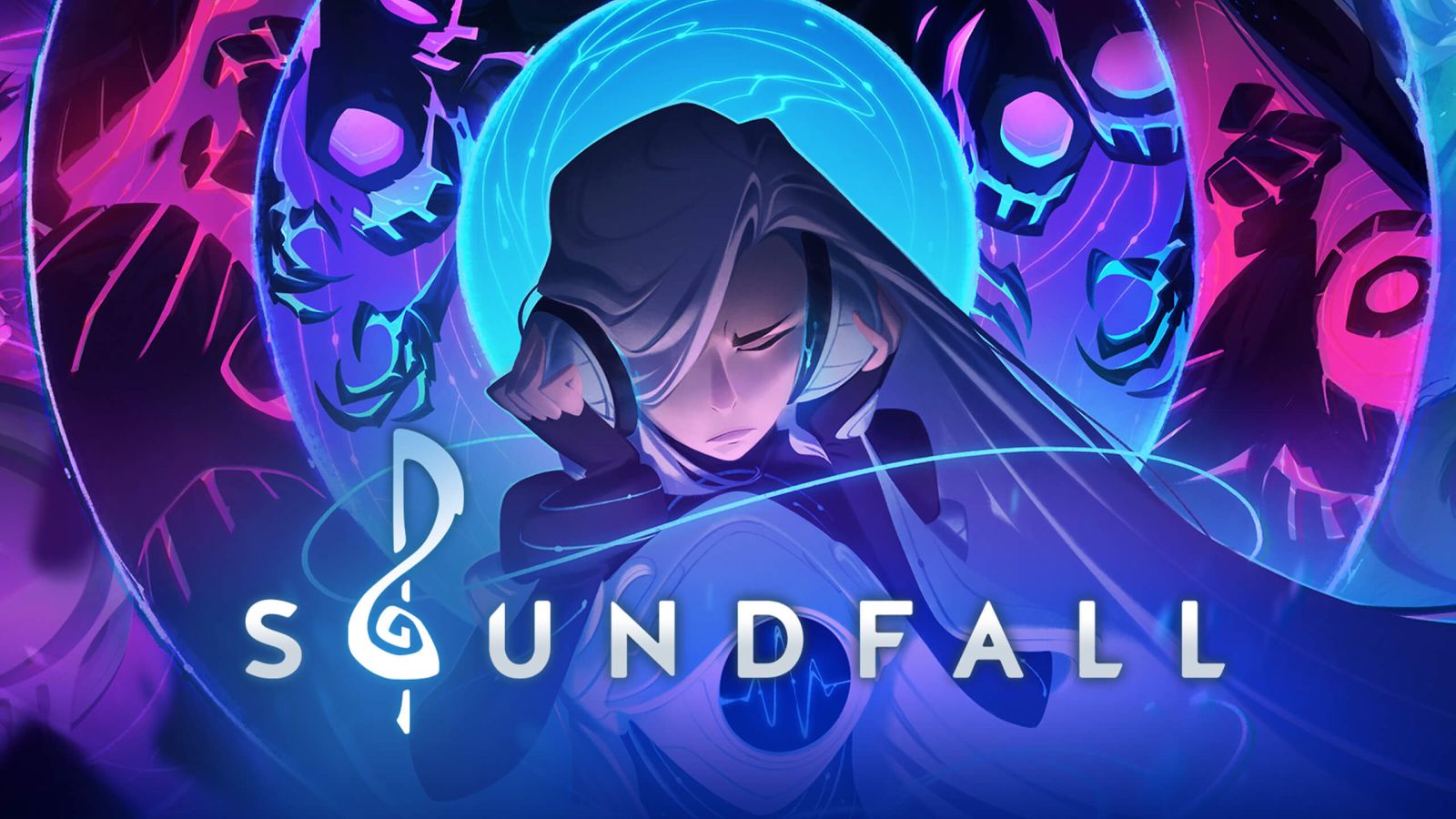 Soundfall can best be described as a rhythm-based shoot-em-up looter shooter. When I first saw the trailer for the game I was excited to see how the game would blend all of these genres to make a fresh and compelling experience for the player. Now that I have played the game, I cannot say that the game feels exactly as I thought it would. Its use of rhythm-based shooting and dodging is not entirely unique, as various games have used similar mechanics to differing degrees of success, but it is also not something that has been done to death. Because of this, I was interested to see what Drastic Games had to add to this relatively new genre of games. After spending 15 hours with the game and rolling credits, I can say that it isn’t much. That doesn’t mean the game itself is bad, however; it’s just to say that it does not feel like an evolution of the genre compared to what we have seen in the past.

The strength of any rhythm-based game derives from how good it feels to be on beat, and how good the music is. When you are on beat, the game does feel smooth. You quickly get into a flow state as you tap to the beat and take enemies out left and right. That flow state, however, is interrupted when you are attacked. Getting attacked momentarily freezes you in place, throwing off your groove. That’s not a bad thing, as you should feel knocked off balance when you open yourself up to attacks. The music, however, is bad. OK, the music isn’t horrible, but not a single track on the entire soundtrack stood out to me. There is no track that stands out in my mind as the definitive Soundfall song. No song embedded itself in my head during or after my play sessions, and no song felt like it belonged in the world of Soundfall. All the songs felt similarly generic, akin to something you would find in the Windows Movie Maker library. I would have loved for there to be tracks that felt handmade for the world. I would have liked to see how the enemies interacted with the beat in unique ways to change things up, but nothing that interesting ever happens.

The other phrase that drew my attention to the game, looter shooter, is also not as fully realized as I would have liked it to be. Loot in this game is simply not all that compelling. There are different weapons such as Boomboxes (essentially rocket launchers), Quarterizers (semi-auto rifles), Burstfires (what they sound like), Repeaters (automatic weapons to an extent), and more. Each specific drop of these weapons has the potential to roll with different traits and elements. Some traits include adding knockback to attacks, increasing range, granting additional ultimate charge, and making your weapon take longer to overheat when attacking off-beat. They all serve to add to your gameplay in small ways, and they do serve to deepen combat if you play into them. 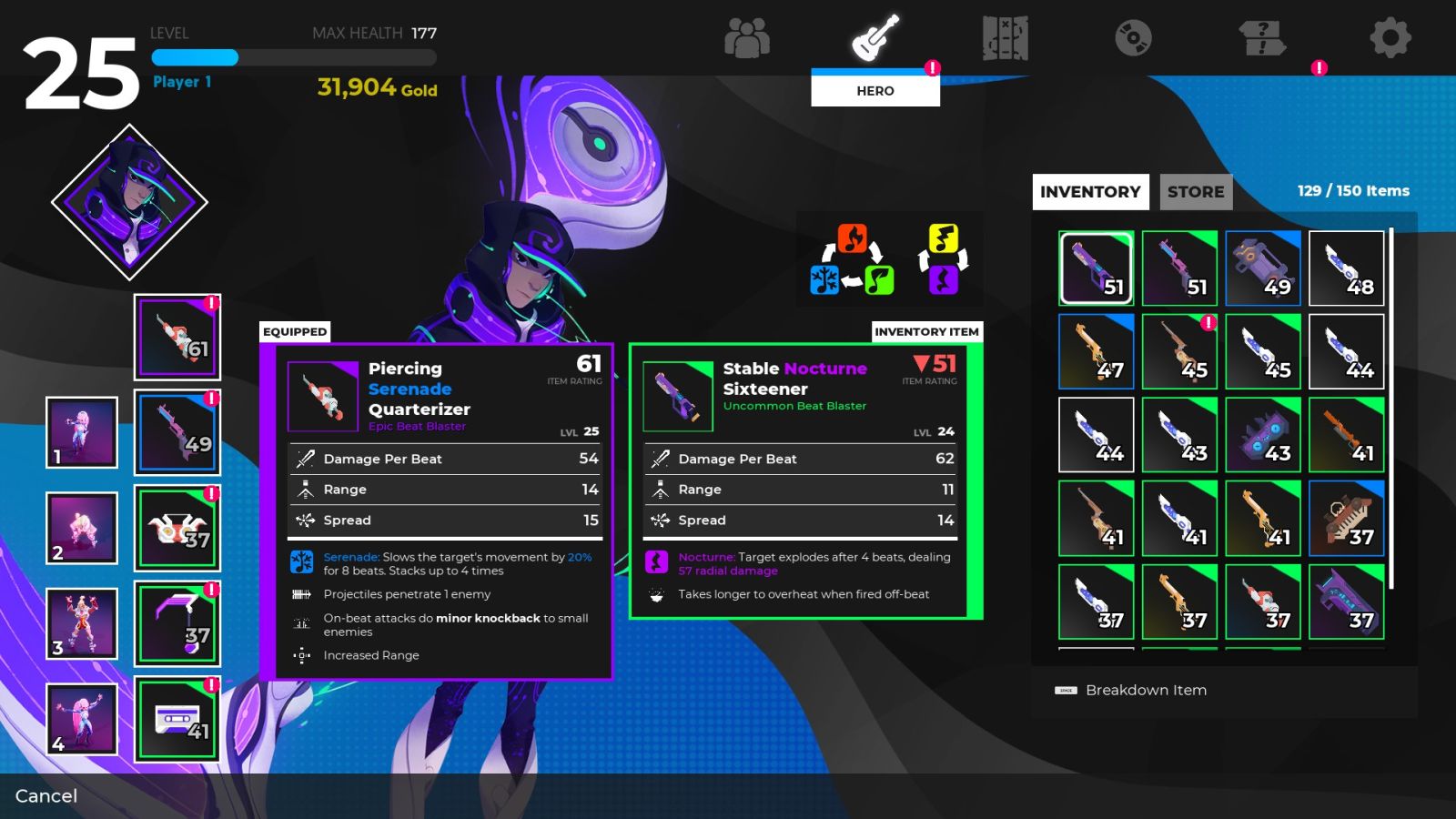 Elements include Serenade, Bolero, Minuet, Nocturne, and Requiem. The former three all have their own effects and create a rock-paper-scissors triangle of weaknesses and strengths. Serenade slows enemies, Bolero deals damage over time, and Minuet heals the wielder for a percentage of the damage it inflicts. Nocturne and Requiem operate outside of the triangle, with Nocturne applying a timed detonation to enemies it hits and Requiem chaining damage to nearby enemies when you hit your target. These elements also serve to deepen combat and change your strategy depending on what you are using. Additionally, there are other slots on your character that allow you to equip items with other traits and perks. There are also four characters to choose from, all with their own ultimate abilities and weapon attacks. Throughout my play time, despite the traits and elements and character variety, I never felt encouraged to craft a build. I never felt like it would have mattered all that much whether I was using whatever my highest powered gear was or I was specced into a specific style of play.

I think this is mostly because the traits and elements that rolled on all of the weapons and armor that I picked up just did not scream synergy to me. Nothing really begged to be tried out in tandem with anything else, and as an avid player of looter-shooters, I tend to be on the lookout for powerful combinations of perks and abilities. Another issue is the difficulty of combat encounters. For the majority of the game, combat encounters are a breeze, even on the Challenging level of intensity. This means that there is never that much incentive to branch out and test different builds to see how effective one weapon is over another. There are occasional difficulty spikes that turn the heat up to 11, but those are few and far between. Even then, the difficulty comes in the form of more enemies with a bigger health pool, so many of the traits mentioned above won’t even help to whittle enemies down. The entire system of loot feels half-baked as a result, with the arbitrary power rating of any given weapon mattering more for raw damage than for anything else. 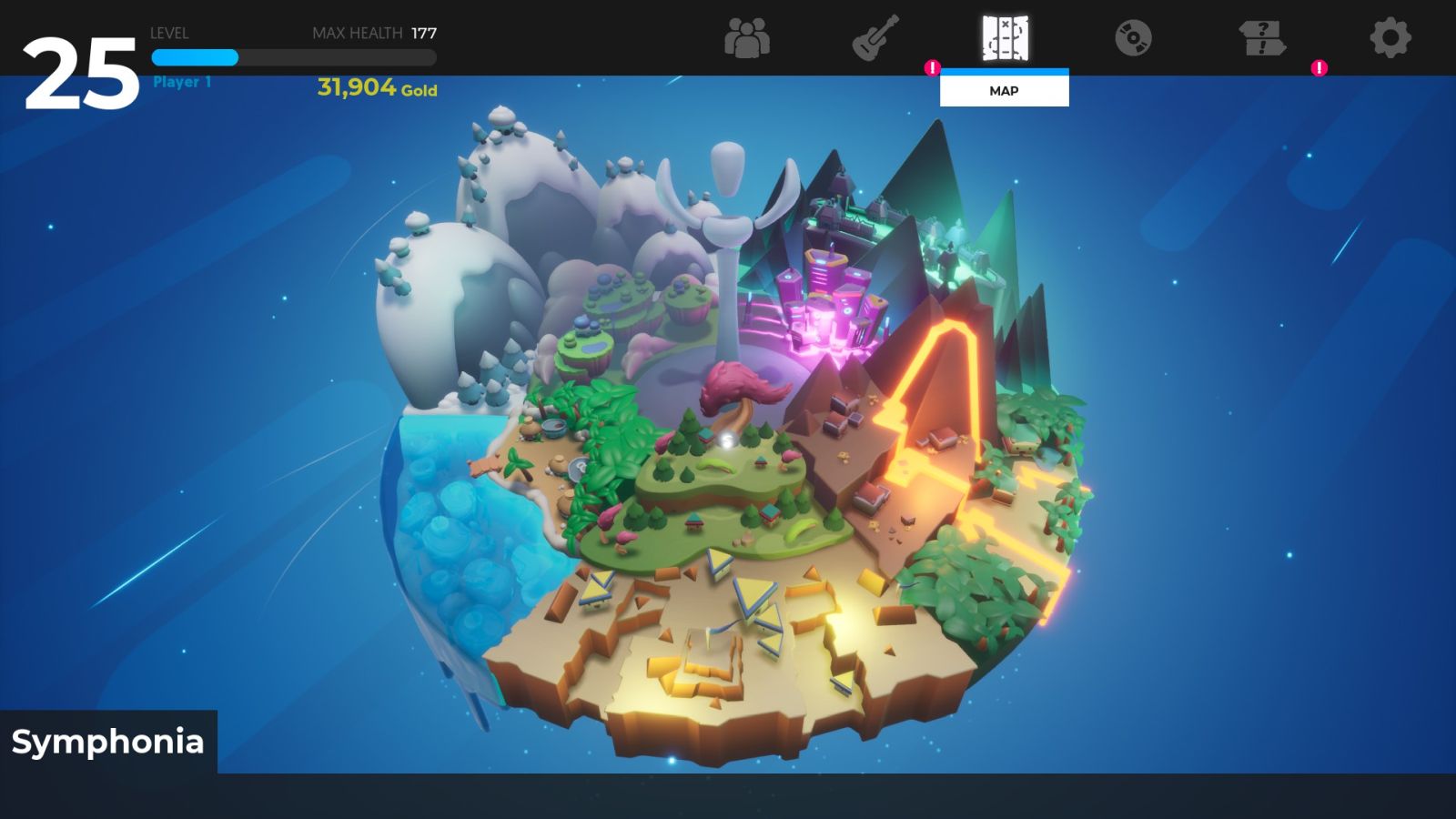 The world of Soundfall, known as Symphonia, is home to 10 different biomes ranging from forests, to jungles, to beaches, to snowy tundras. Each biome is visually interesting in its own right, with every one of them having a color palette that pops while also serving to nicely contrast against the player character and enemy NPCs that run amok. Some of the biomes have different environmental obstacles such as lava chunks that fall from the sky or extra slippery ice layers, but aside from the visuals and the occasional obstacle, there is not much to differentiate levels from one biome to another. Very quickly you will realize that you’ve seen all there is to see when it comes to enemy variations and types, and to break up all of this monotony are the boss fights.

There are two boss fights. These two boss fights are stretched across 100 levels (one at the 50 level mark, and the other at the 100th), and both bosses are fun. They serve to break up the tedium of the game, and they make me wish there were more of them to face throughout the game’s runtime. Still, there is nothing remarkably better about them than any other encounter in the game; they just present a nice change of pace when they do come around.

The story in Soundfall is mostly skippable. There are elements of people learning more about themselves and coming into their own, but none of it connects in a meaningful way. It mostly just serves to get you from point A to point B and introduce new characters to you. Every time a new character is introduced, they discover their unique weapon. These discoveries are always accompanied by a short animation dripping in the stylings of space rock and neon. I always looked forward to these animations as they were full of energy and you could really feel the passion behind the work. If anything, it is these cutscenes that I will remember when I think about Soundfall. That’s a testament to the quality of the animation but also to the mediocrity of the rest of the package.

Soundfall is not a bad game, but it had so much potential that I cannot help but be negative when looking back at my time with it. There is a good time to be had with it, and I am sure that it will find its fans. I am just not sure that I’m one of them. That’s a shame, because on paper this is a game that should have blown me away.

Soundfall has an interesting premise, but it falls short of realizing its potential. Nothing in the game is overtly bad, but this isn’t a game I’ll come back to or probably even think about all that much. Soundfall is a let-down, missing just enough beats to throw off its own groove.

Noah Anzaldua is a game journalist, Twitch streamer, and a passionate fan of Apex Legends and Destiny 2. Writing and streaming are his passions, and he is carving a career path out for himself. He is a graduate of the University of Alabama where he is majored in News Media, History, and Political Science.
Related Articles: Indies, Soundfall
Share
Tweet
Share
Submit