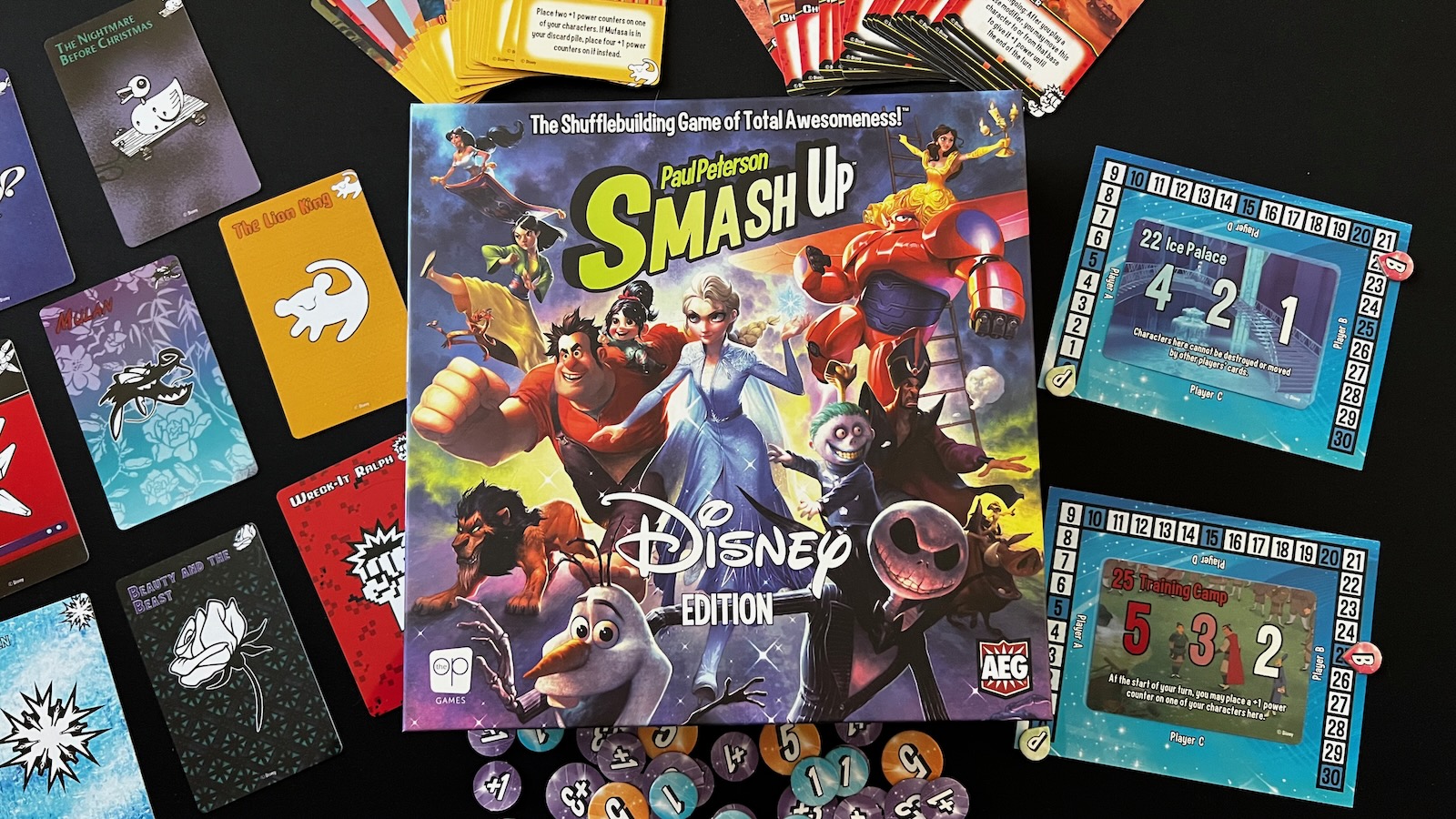 When starting the table top hobby, a friend introduced me to the original Smash Up. Take two decks, smash them together, and try to outscore your neighbor. We had hours of fun making different combinations like Zombie Ninjas, Dinosaur Wizards, and Robot Pirates, seeing which ones synthesized the best. With the new iteration of Smash Up: Disney Edition, we can finally answer the question: What if Mulan and Simba teamed up to take on the streets of Agrabah?

Smash Up: Disney Edition is a game from designer Paul Anderson and publishers The Op and AEG. First introduced in 2012, Smash Up has grown a cult following through its unique shuffle building system and unique deck lists. Smash Up: Disney brings in 8 new factions to the 70ish other factions available from the original core box and expansions. 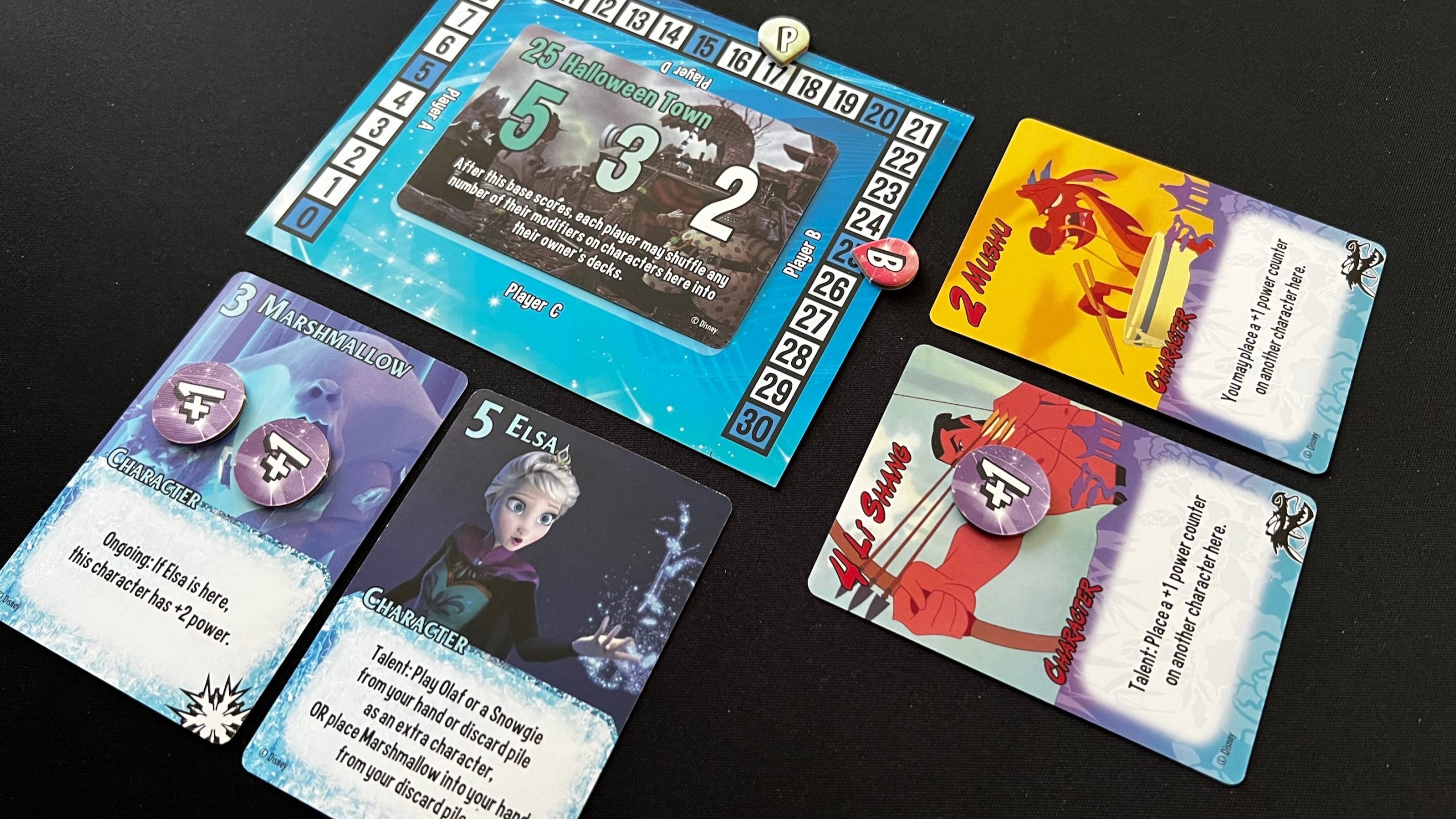 Two players placing cards at a base. Features the new base tracker mats.

The rules of Smash Up are unchanged. Players will choose two different factions and shuffle together their associated decks. From their hand, players are allowed to play up to one character and one action card. Characters are placed at bases and contribute their power total to the other characters at the base. Each base has a limit, and once the limit is reached, the base breaks and points are distributed to players based on their contributions to power total. Bases and Character cards have special actions printed on their cards which players must take into account as well. Action cards help modify abilities on character cards, add or subtract power to bases, and a variety of other different things to help their owners or hurt other players in the game. If a player has 15 points or more at the end of the turn, they win! 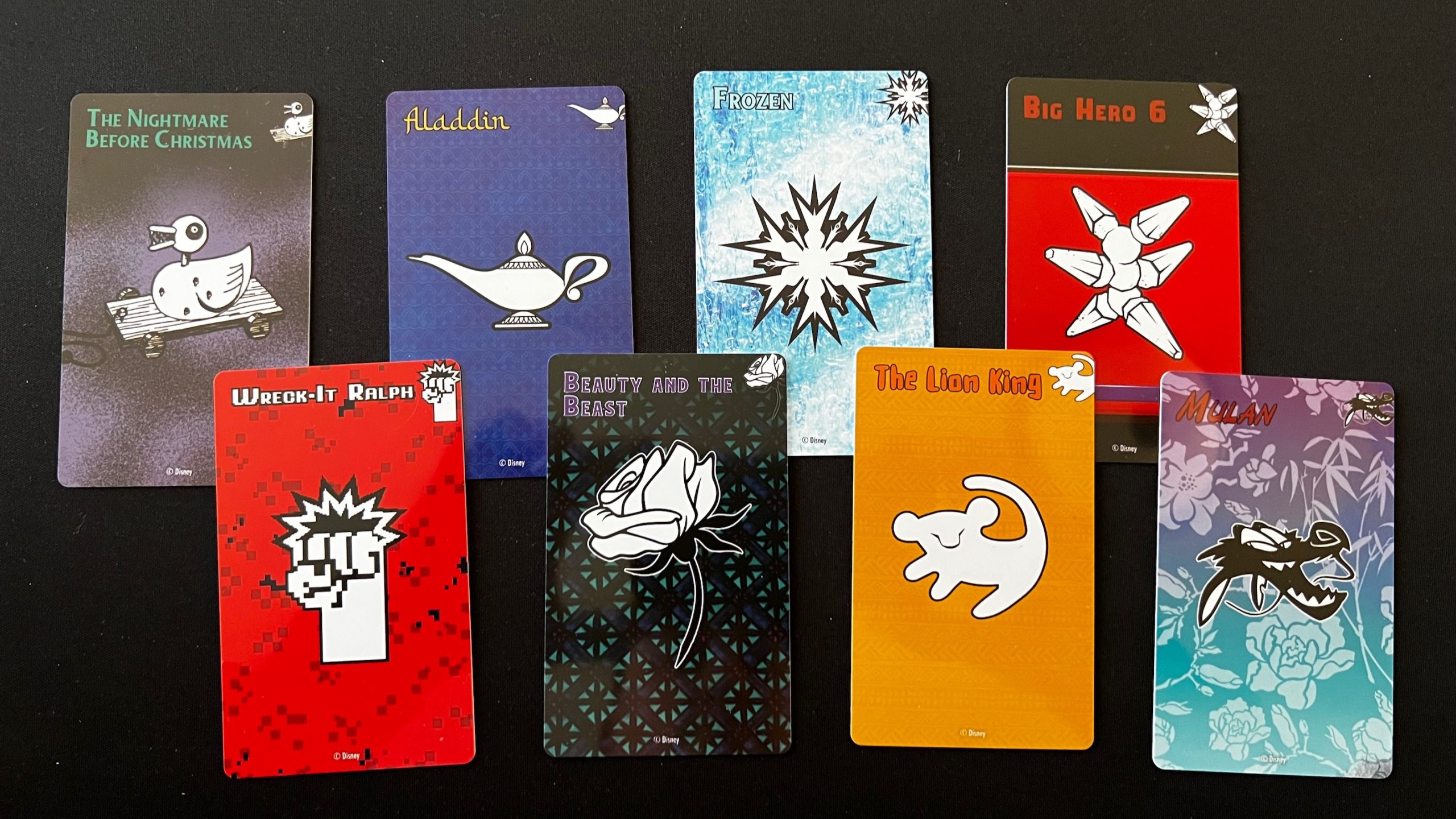 Smash Up: Disney Edition brings in the following factions and abilities: 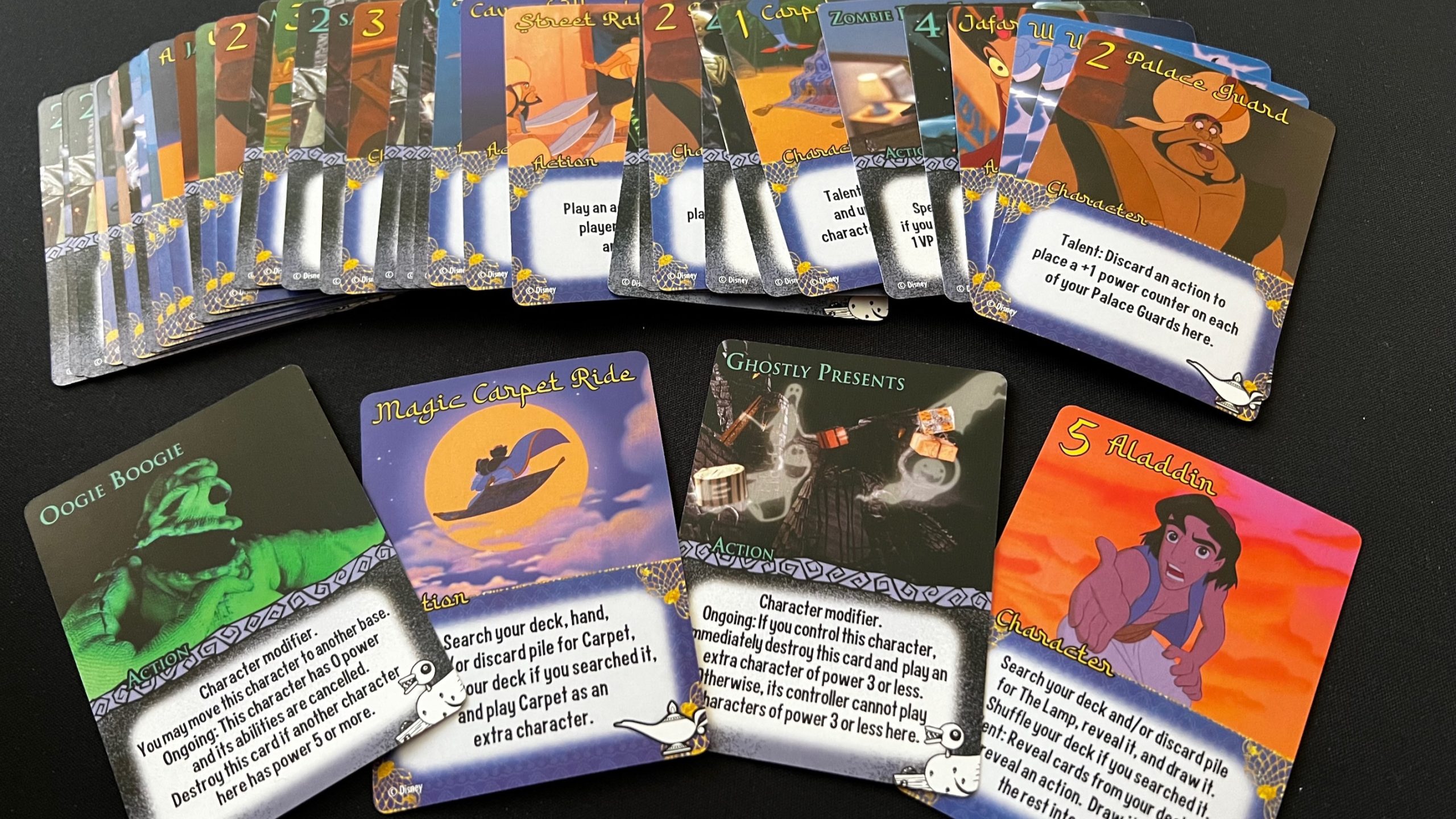 A Smash Up deck featuring Aladdin and The Nightmare Before Christmas.

The production quality of the Disney edition is good and what you would expect from a Smash Up expansion. The insert allows for more decks to be added than the ones included. The card stock is of a good quality and lends itself to the constant shuffling. The Disney edition also adds base mats and trackers to help label the breaking point and current power level for players which was a nice addition. The instruction manual is easy to use and provides some great starter combinations for new players. 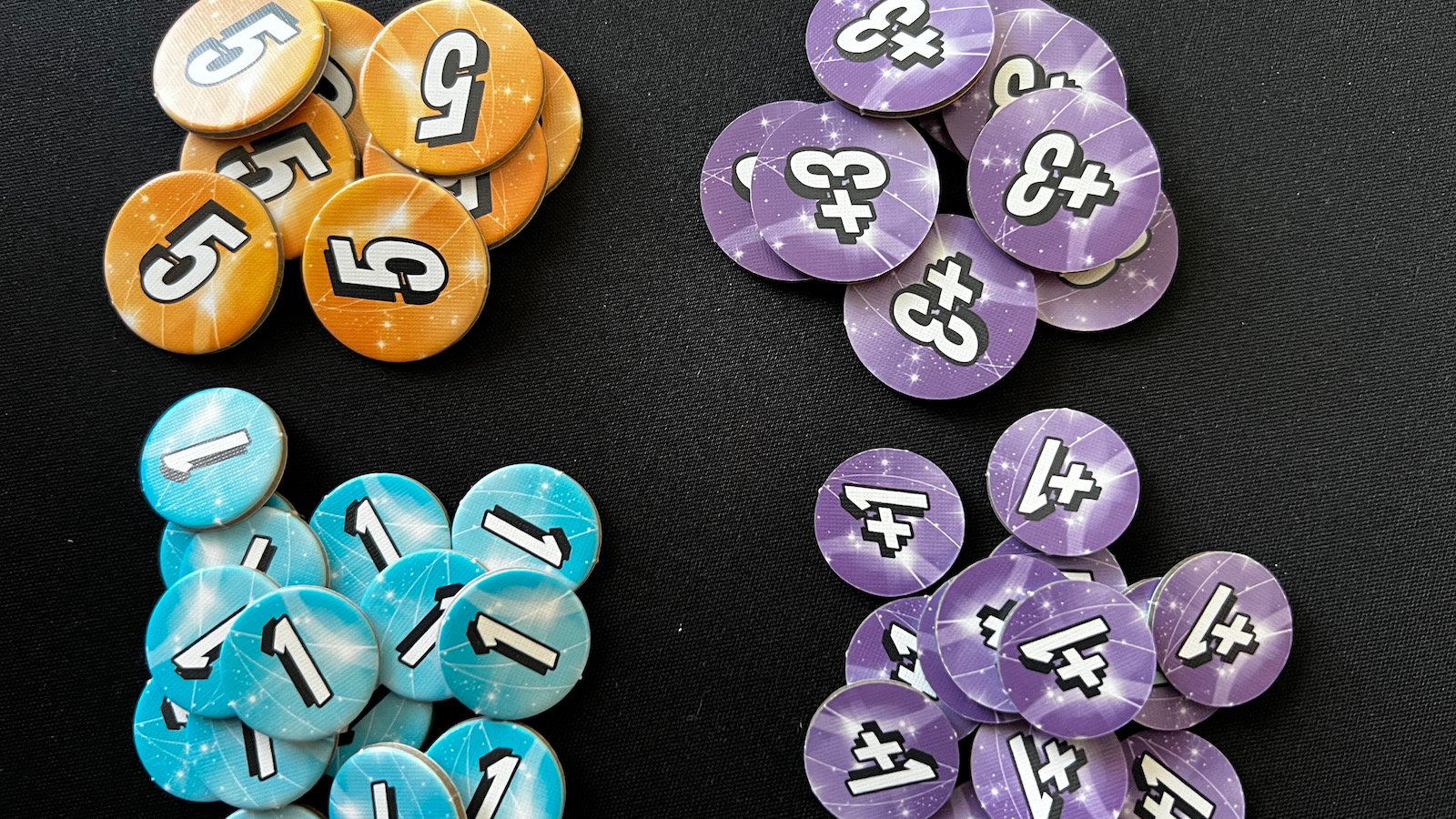 Point trackers with power modifier tokens on the back.

As a stand-alone game, this is a great entry into the Smash Up universe with a very accessible theme for many people. With a list of suggested starter combinations and the ability to make over 25 different pairings, there is a lot of replayability in the game. The simple gameplay mechanics give this a low entry point, but the strategy of how to play the deck combinations gives the game some teeth. Even though Smash Up: Disney Edition plays as a stand alone version, it can be combined with any of the previous factions released adding to the almost 3,500 combinations already available.

Smash Up: Disney Edition is a great entry into a classic franchise or a fun return for veteran players. Easy gameplay and a lot of replayability.