The world was a different place when Harvest Moon: Friends of Mineral Town charmed its way into the hearts of gamers worldwide. The Game Boy SP, with its fancy backlighting, was the height of technology, and this helped make FoMT the perfect hiding-beneath-the-covers gaming experience for yours truly. Marvelous Entertainment has managed to create a beautifully reimagined Mineral Town, filled with colorful characters and quality of life updates, while retaining the charm of this simple but surprisingly intricate world in Story of Seasons: Friends of Mineral Town.

The 8-bit pixels may be gone, but the chibi remains. SoS: FoMT feels soft and bright, and big heads abound, both in the sprites which wander the town maps as well as in the completely redone character art. Every character has received a new set of portraits, and, in some cases, a complete overhaul. I actually had to go back and double check that Cliff was indeed Cliff, as the former ponytail guy has transformed into a fluffy-haired bishounen dream boy. 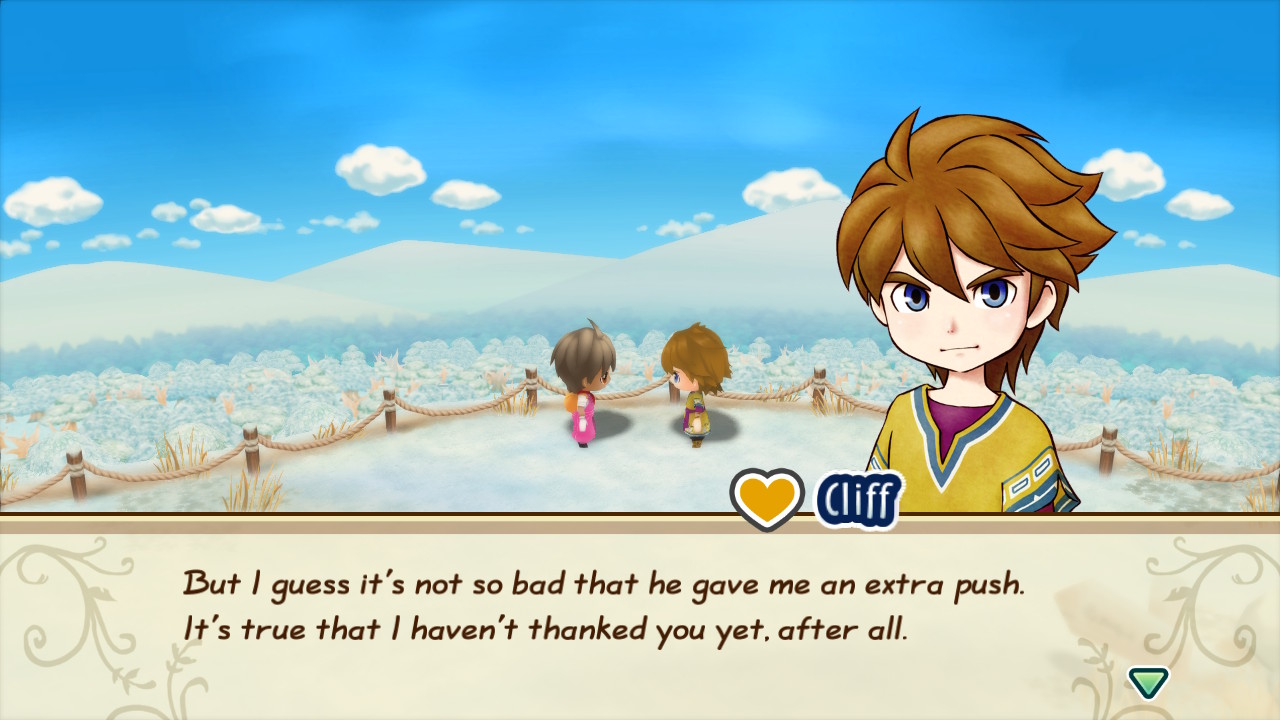 The game also comes with a complete retranslation, which modernizes and brings the language closer to the original Japanese script, which includes a few name changes. (Ann is now Ran, Gotz is now Gotts, etc.) We also get two new marriage candidates; Jennifer, the free-spirit hippie girl who lives in a tent, and Brandon, the aloof artist who spends his days carving sculptures in Gott’s workshop. Outside of those changes, the basic spirit of Friends of Mineral Town and More Friends of Mineral Town remain the same. Characters are not especially deep, and certainly don’t have the levels of troubled pasts we see in Stardew Valley, but they each feel distinct. Festivals are still surprisingly small affairs, and the Horse Race remains one of the best ways to make money early on. Also: don’t forget to keep tossing coins (or offerings) to your Harvest Goddess!

You’ll start off the game deciding if you’d like to play as a boy or a girl farmer, then selecting their look. You’ll be able to change your skin tone and choose between the classic farmers outfit from the original games, or a more modern look, complete with a hoodie. You won’t be able to edit your character’s eyes or hair, but you can use the mirror in your house to switch between various colors of the standard outfits at will, or change into a cozy kigurumi. Early adopters of the game will receive an adorable cow onesie outfit, in addition to the reindeer costume, which is available to everyone with a copy of the game. I found myself swapping outfits with surprising regularity — overalls for days with lots of work in the fields, hoodies for social events — and realized, after the fact, that I’d proposed to my future husband while dressed like a cow. No wonder he wanted to talk somewhere private. 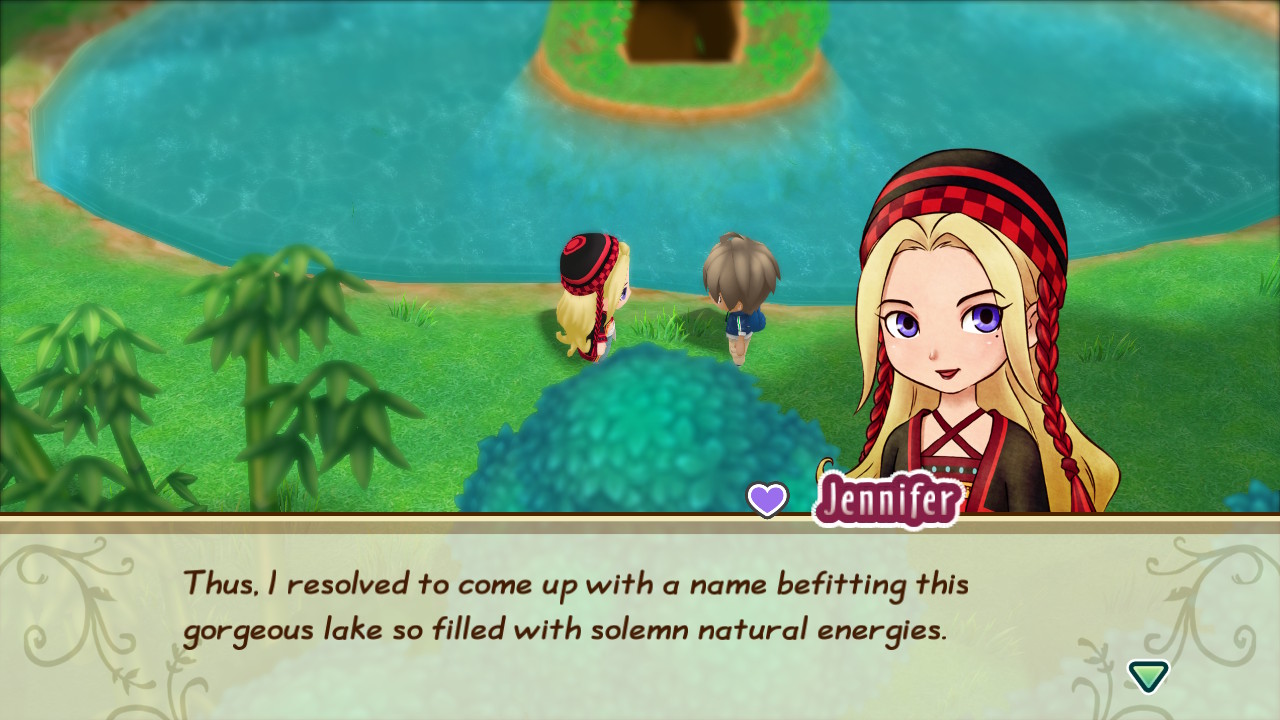 The gameplay feels pretty simple when compared to indie superstar Stardew Valley, which was itself inspired by this era of Harvest Moon games. This simplicity hides the depth and challenge of FoMT, which has a number of obstacles which are not present in modern farming games. Characters come and go from Mineral Town–the most obvious of these is Kai, who only calls Mineral Town home during the summer season–but there are others. If you make the wrong decisions at the wrong times characters will move away from the town, never to be seen again–and then there are the hidden characters. It’s not only humans that call Mineral town home; you can forge friendships with goddesses and kappas, but first you’ll have to find them. The game also makes charming nods to other games and characters in the Harvest Moon/Story of Seasons family. From Brandon wanting to visit the “Forgotten Valley” to references to Louis from Harvest Moon: 64, the game shows some real love to the other worlds within the series. 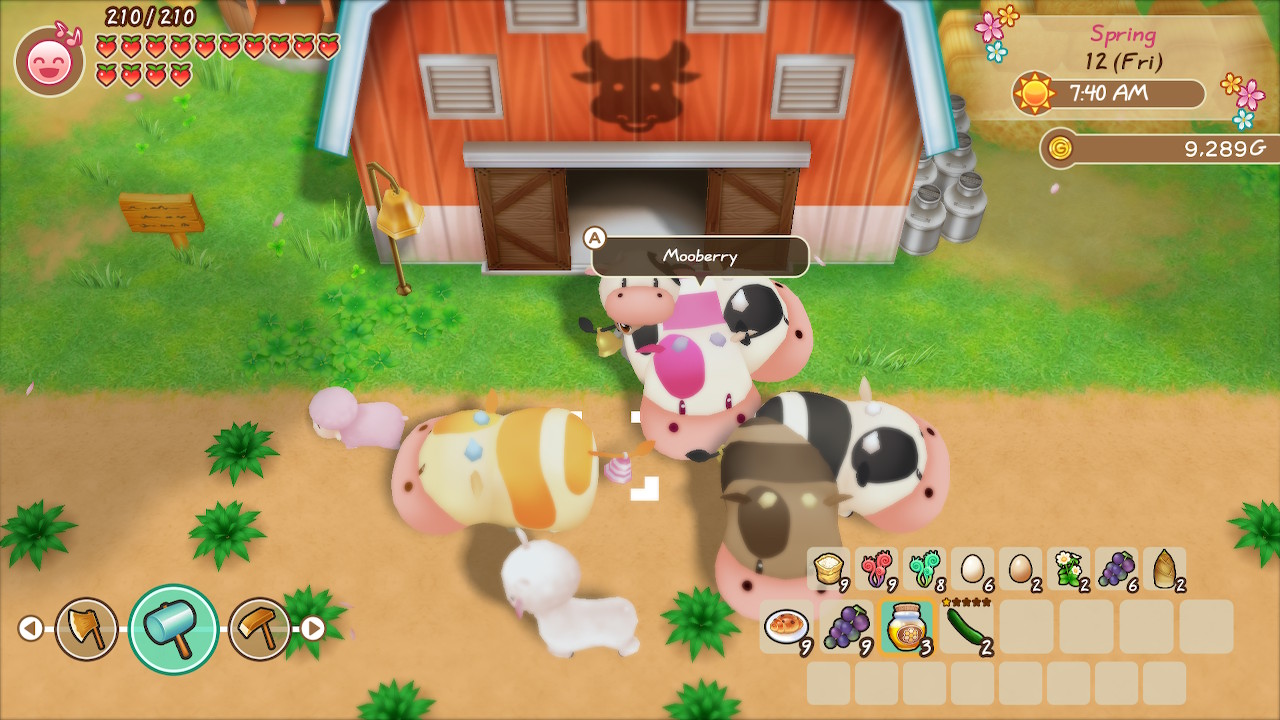 Many characters also have marriage rivals, and if you don’t steal the heart of the guy-or-gal of your dreams quickly, you may find yourself out of luck. Friendships between NPCs can blossom into something more in Mineral Town, and love will find a way to bring two people together unless you can put a ring–or a feather–on it first. There are also a number of hidden marriage candidates; characters you can court and marry despite the fact that they initially only display a friendship (musical note) meter and are lacking the affection (heart) meter. I will also leave a quick note here, since I’ve previously gone into this in great detail, but the western release not only allows you to see the heart meters of any non-secret bachelor or bachelorette from the start of the game, regardless of the gender of your farmer, but it also refers to all unions, regardless of if they are between characters of the same or the opposite sex, as ‘marriage.’

The remake brings two huge quality of life updates: automatically ringing bells which call your animals in every night, and you’ll no longer have to “U farm,” as you can now move across growing crops. The old-school mines have returned, all 255 floors of them, so get ready to stock up on food and get digging. Pets have also returned–but with a delightful upgrade. After achieving certain things within the game, a pet store will appear in the town square monthly, allowing you to bring home different kinds of pets. You can have several pets this time around, ranging from your traditional farm dog to capybaras and even penguins. Pets also come in different colors, and while there will only be one species available each month, you’ll be able to pick from two different colors. 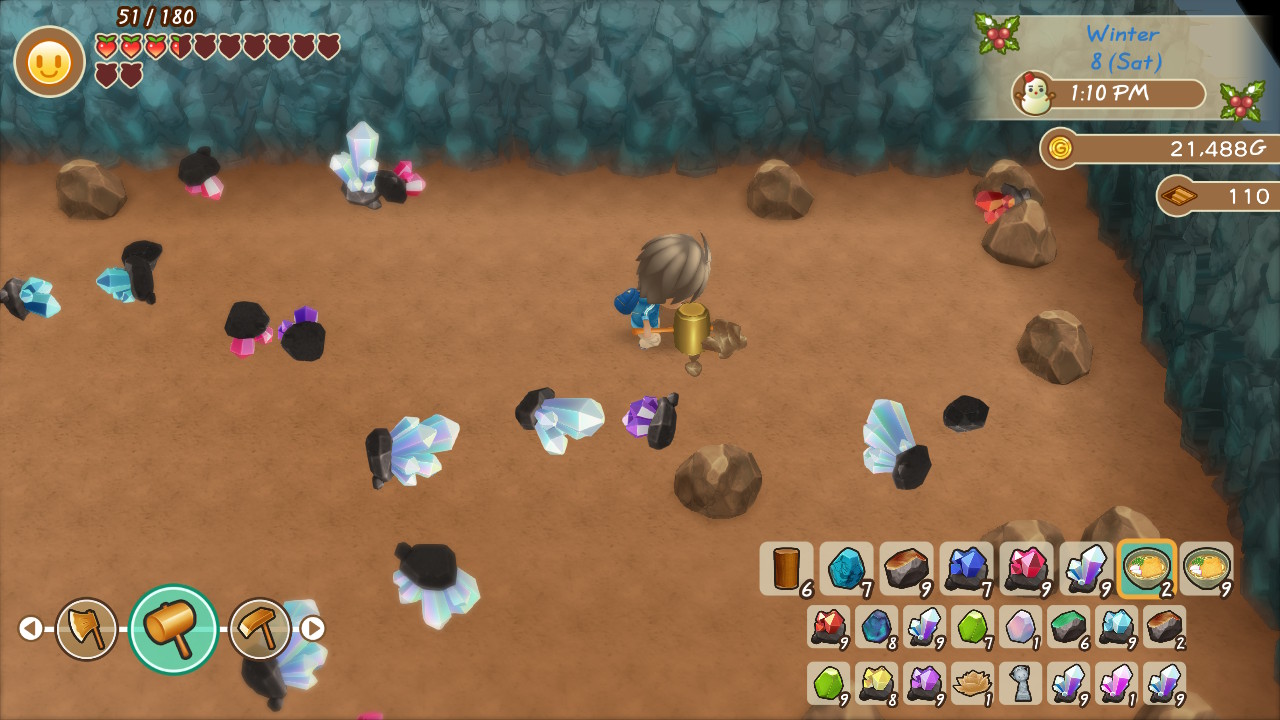 Many modern farming games, Stardew Valley included, make it easy to get overwhelmed if you stop playing for a span of time. If you forget what your goal is, or skip steps on a previously well-established routine, you can find yourself losing money or unable to move efficiently forward. Such is not the case with SoS:FoMT. That simple gameplay loop allows you to pick up the game and jump right back into farm life, regardless of how long it’s been. It’s a game that intends for you to come back and enjoy the simple life whenever you need a break. That’s exactly what the developers intended you to do, as evidenced by the fact that one particular major reward can only be unlocked after fifty years of marriage.

Story of Seasons: Friends of Mineral Town is simple and charming, but beneath the rather basic gameplay loop hides some surprisingly deep secrets. It brings back elements of farming games past, including marriage rivals and transient characters, while providing some major quality of life updates as well as a more freedom, such as limited character customization and a truly bizarre variety of farmyard pets. It’s a cozy, welcoming little village, sure to charm any farming fan.