The bond between siblings can be powerful, even pushing them to do incredible things for one another. This could be something as simple as helping them with homework or something as meaningful as supporting them during tough times. What if someone put their life in danger to save their sibling? Imagine a night going from normal to terrifying as you witness a horrific event. What if everything you thought you knew was turned upside down and you’re the only one capable of returning any semblance of normalcy? My Big Sister drops you into a similar situation filled with mystery and horror, and does a pretty good job at making you want to help the unfortunate siblings.

My Big Sister puts you in the shoes of Luzia, a little girl with a smart ass attitude and a tendency to make jokes to ease the tension. One night, she has trouble sleeping due to a reoccurring nightmare and heads downstairs to speak to her older sister Sombria. After some bickering, Luzia heads back to her room but is still unable to sleep. She goes back downstairs and finds a trail of blood. Thinking that her sister is pranking her, Luzia begins to calmly search the house and eventually ends up outside. She enters a box truck and sees Sombria inside bleeding. Soon, both sisters are being taken away in the box truck and the adventure begins. 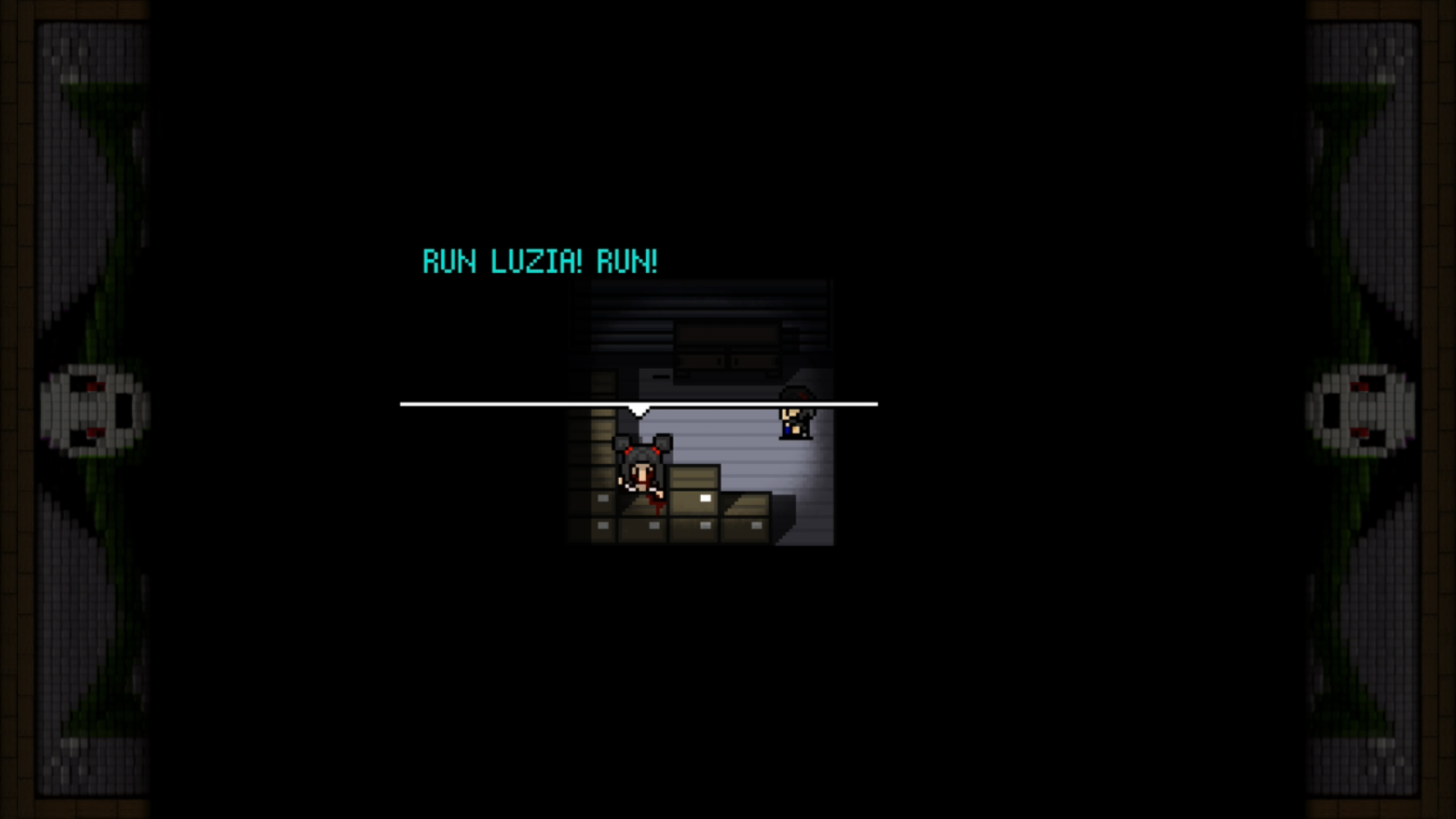 My Big Sister is a top-down pixelated exploration game, where your only actions are moving, interacting with objects, and using items in your inventory. As you play, you’ll want to explore every area you’re in in order to discover hidden items that are either used to progress the story or even activate special events. The game gives some straightforward hints or directions about some objects, while others take more initiative. I had a few moments where I was proud to have found something to be used at a location I had encountered recently. The light puzzles aren’t tough but they do provide a sense of pride when solved on your own.

The story itself is a lot more interesting than I had expected. Without going into any spoilers, there’s a lot more lore and backstory than you’d think. There are plenty of cutscenes that move the story along, and I took the time to read every word. Some games can get boring when they have a lot of talking, but that’s not the case here. In fact, all of these moments made the game even stronger. With each new encounter, I was able to piece together more of the weird happenings and therefore got more invested into the story. I wanted to find out how things would end and if there was any way that I could impact it. Turns out you can make some choices near the end that affect how the story ends, but it’s better to figure out your options on your own. That way you can truly resolve things on your own terms instead of following the actions of others. If you don’t like the ending you got, there’s a chapter select option so you can go back and try something different. It’s a nice way to allow you to experiment and see different endings without playing the entire game again. I do need to warn you that some serious topics such as depression come up during this game, so be warned. 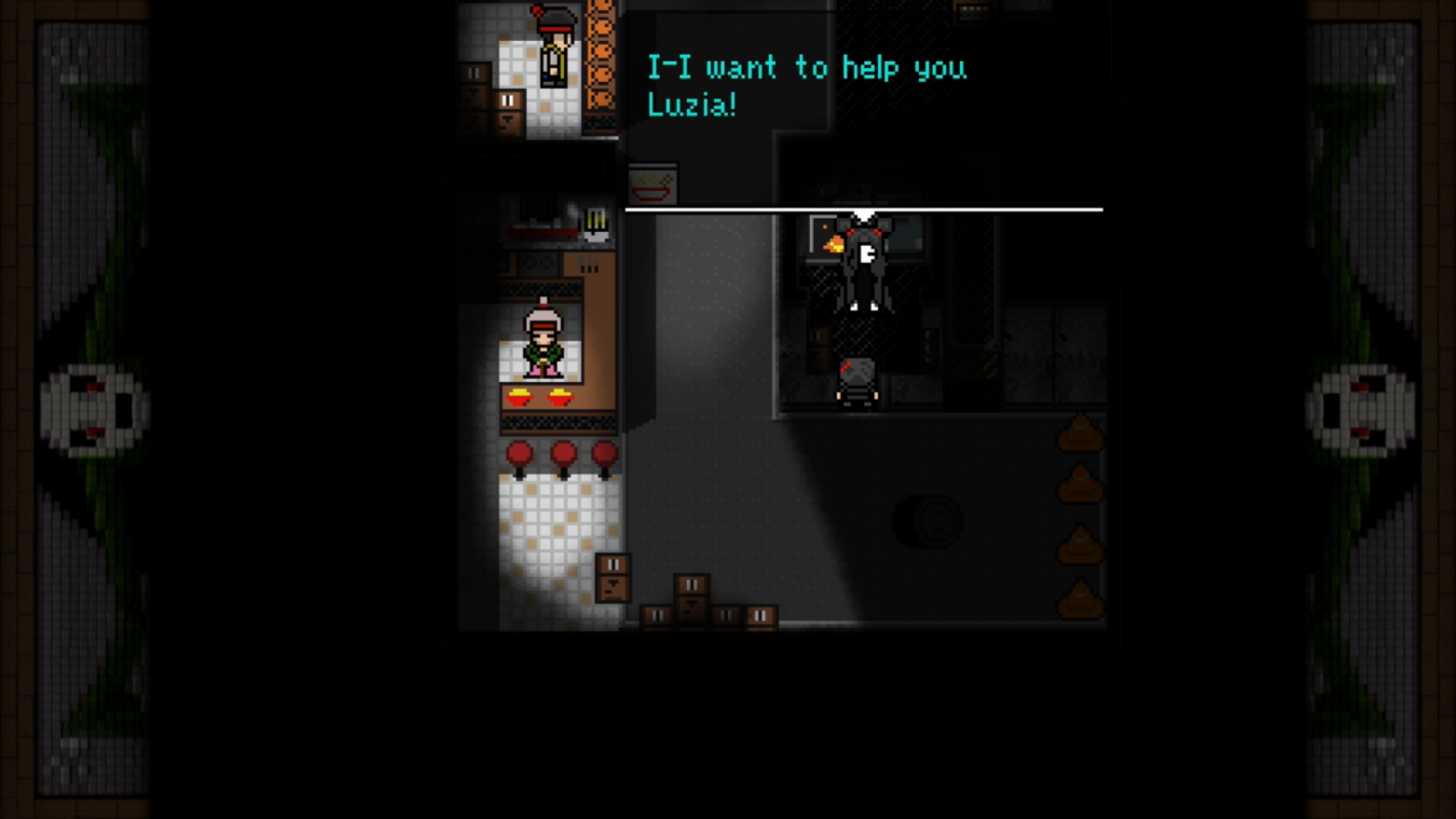 The graphics contain a pixelated style, which is always charming for these types of games. The gory aspects weren’t over the top or stylish, but didn’t need to be. The ominous music, the unsettling situations, and the off-putting yet intriguing cast of characters meshed very well. The game isn’t scary by any means, but it does create a slightly creepy tone for itself. It does enough to make you feel a bit uneasy at times without over-reaching. The game only taking around two to three hours at most to complete is great as well. I fear that if the length was stretched out too much more that it would’ve lost its appeal. Explaining too much or dragging on for too long would ruin some of the game’s mystery. That being said, My Big Sister is definitely an interesting experience that I recommend for anyone looking for a fascinating little story filled with oddities and intrigue.

My Big Sister is a pixelated top-down game with interesting premise. The light puzzles and weirdly appealing cast keep the game fairly light-hearted, but be prepared for some serious topics to come up. It doesn't take long to beat, but it's worth the time.

Codi loves to play video games and watch movies. He will watch almost any kind of movie just to experience them. His ideas take inspiration from the shows and movies he watches, and games he plays. He also loves a good pun.
Related Articles: My Big Sister
Share
Tweet
Share
Submit