Rhythm games are an interesting combination of music appreciation and pattern recognition. They branch outside the realm of typical games like action adventures, platformers, sports, and more. Depending on the specific game, they can be a mix of relaxing and focused gameplay. Why not branch out a bit more and make the setting a strip club? The Second Chance Strip Club provides an odd yet charming experience that lets players join a cast of quirky characters as they express themselves onstage.

The Second Chance Strip Club is an interesting game to say the least; that isn’t a bad thing, but it’s one of the best ways to describe it. The plot boils down to you helping the dancers perform well in order to make money and improve the club. This takes place over the course of fifteen levels, with every five levels unlocking the ability to renovate the club. Renovating the club doesn’t affect anything gameplaywise, but it’s still nice to see the club get bigger and fancier on the main menu. It stands out as a symbol of your efforts.

The gameplay itself is simple, although it takes getting used to. Each level plays its own specific song, which has its own rhythm that you need to match. You are tasked with hitting a series of arrow keys in tune with the current song’s beat. The arrow keys are placed into sets of four, so you’ll be matching the beat in groups of four. It’s a little hard to explain, so I’d recommend checking out the gameplay above for a better visual. There are no hints to show what the timing of pressing the keys should be; this is something you’ll have to determine for yourself. I liked that it didn’t hold your hand, but in fact tasked you with listening carefully. Figuring out the correct timing and rhythm feels very rewarding, especially when you see a constant slew of “Irresistible” pop-ups (which represents a perfect). If you get a “Sexy” pop-up, you just slightly missed the timing, while an “Oof” is a mistake. 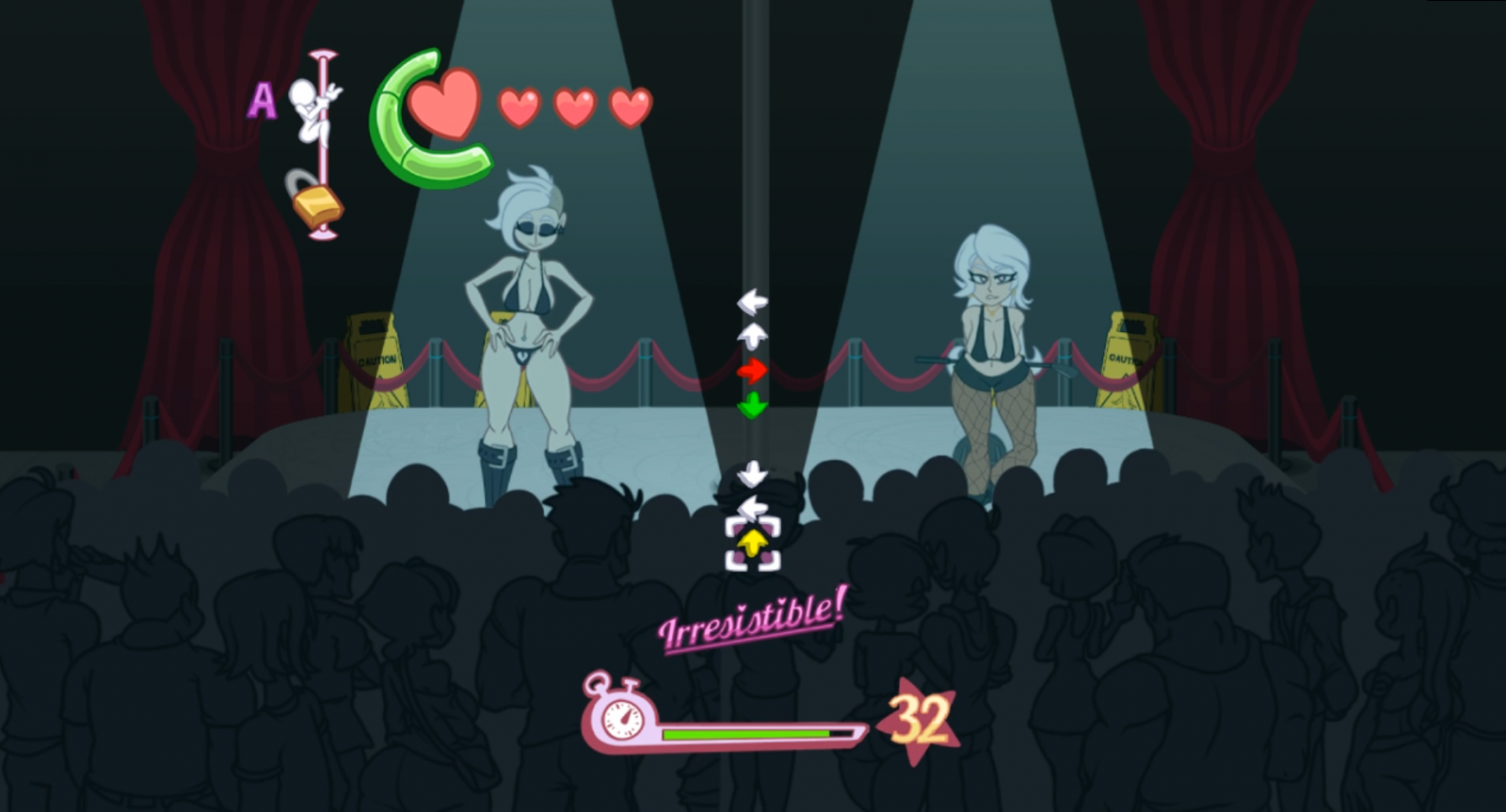 As with all rhythm games, you want to score as perfectly as you can. With The Second Chance Strip Club, you need to earn certain ranks in order to progress. The ranks required change depending on the difficulty you’re playing on. For example, beginner requires Ds, intermediate requires Cs, expert requires Bs, and master requires As. This links back to the club renovation. So if you want to renovate the first time on expert, you need to get at least rank B on each of the first five levels. If you can recognize the rhythm early on, then you shouldn’t have a problem getting higher ranks. The only problem is if you make a mistake partway through, it can sometimes be hard to get back into the rhythm. You may feel tempted to quickly press the keys in order to make up for the mistake, but that will only dig your hole deeper. Take a second to listen for the beat and try to match it again. Once you’ve done that, you can get back on track.

The last part of each level is when you get to reap your rewards. You get a certain amount of time, depending on how well you did, to run around the stage and collect money and gifts. The money is ready to use cash, while the gifts can be sold in the shop later. The gifts are a better source of money, so focus on them. Everything has its own value, so learning what’s cheap and what’s expensive will help you a lot in the long run. The money is used to upgrade the stage, improve the types of alcohol you sell, buy concept art, and buy character biographies.Upgrading the stage increases the drop rate of money and gifts during the end of stage section, while improving the alcohol increases the rarity of items that you can collect onstage. Both of these are incredibly useful to purchase, so go for them first. It helps your money-making tremendously. 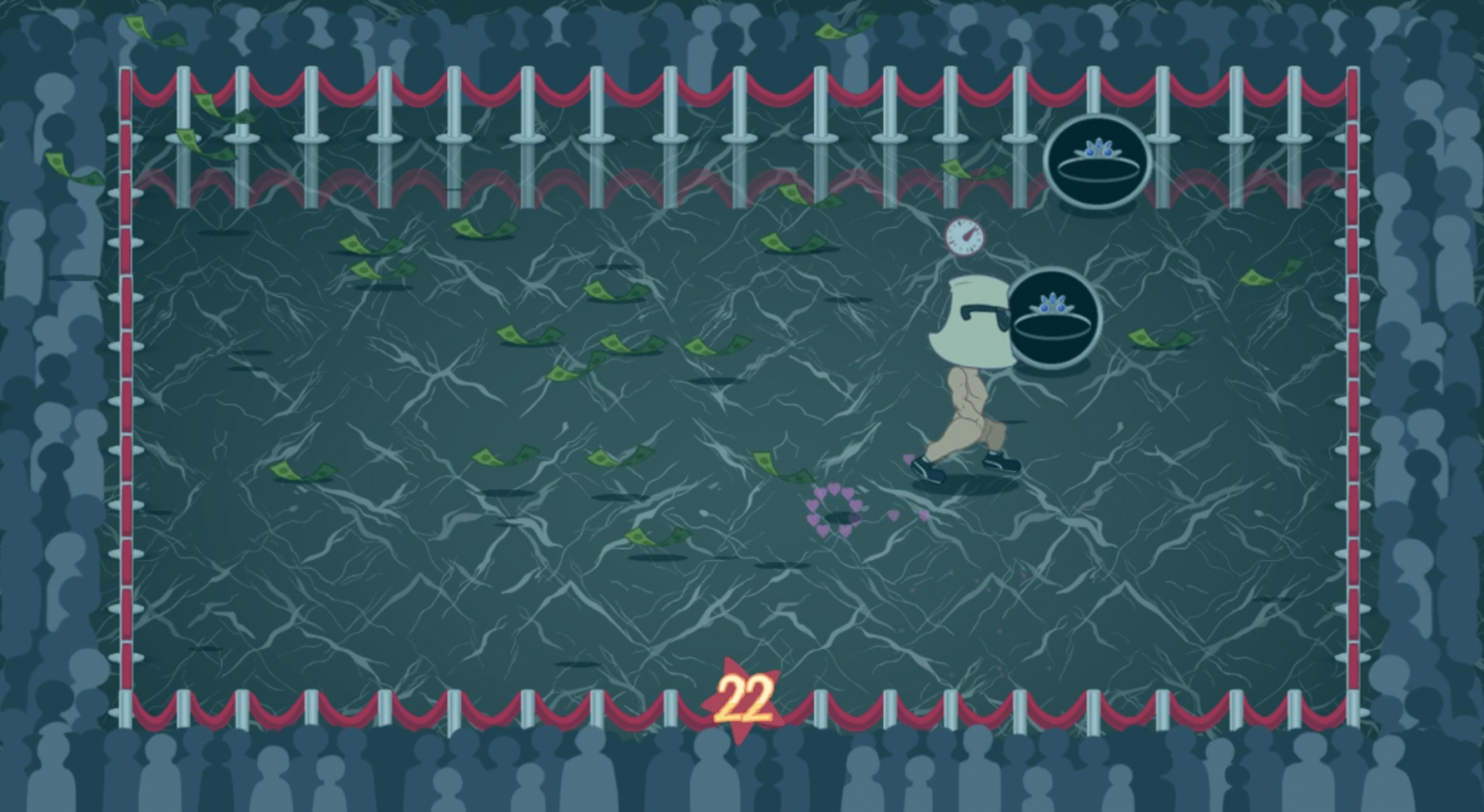 The character bios may not sound interesting at first, but I recommend buying them at some point during your playtime. These bios help transform each of the fourteen characters from dancing avatars to three-dimensional characters. Some bios are more interesting than others, but I started to feel for some of them after reading their backstories. For example, Star Powers’ bio goes into detail about how her parents labelled her a black sheep early on in her childhood. She was ignored, while her sister was pushed to be the best she could be. Star got into a rough crowd, did drugs, and eventually got kicked out of the house. This was a more emotional backstory than I was expecting in a rhythm game about stripping. That being said, these bios added much more to the lore of the game, and to the experience as a whole. So take the time to learn more about Penelope the nerdy introvert, Sensei the talking dog, Robin the passionate artist, and each of the other eleven dancers expressing themselves. 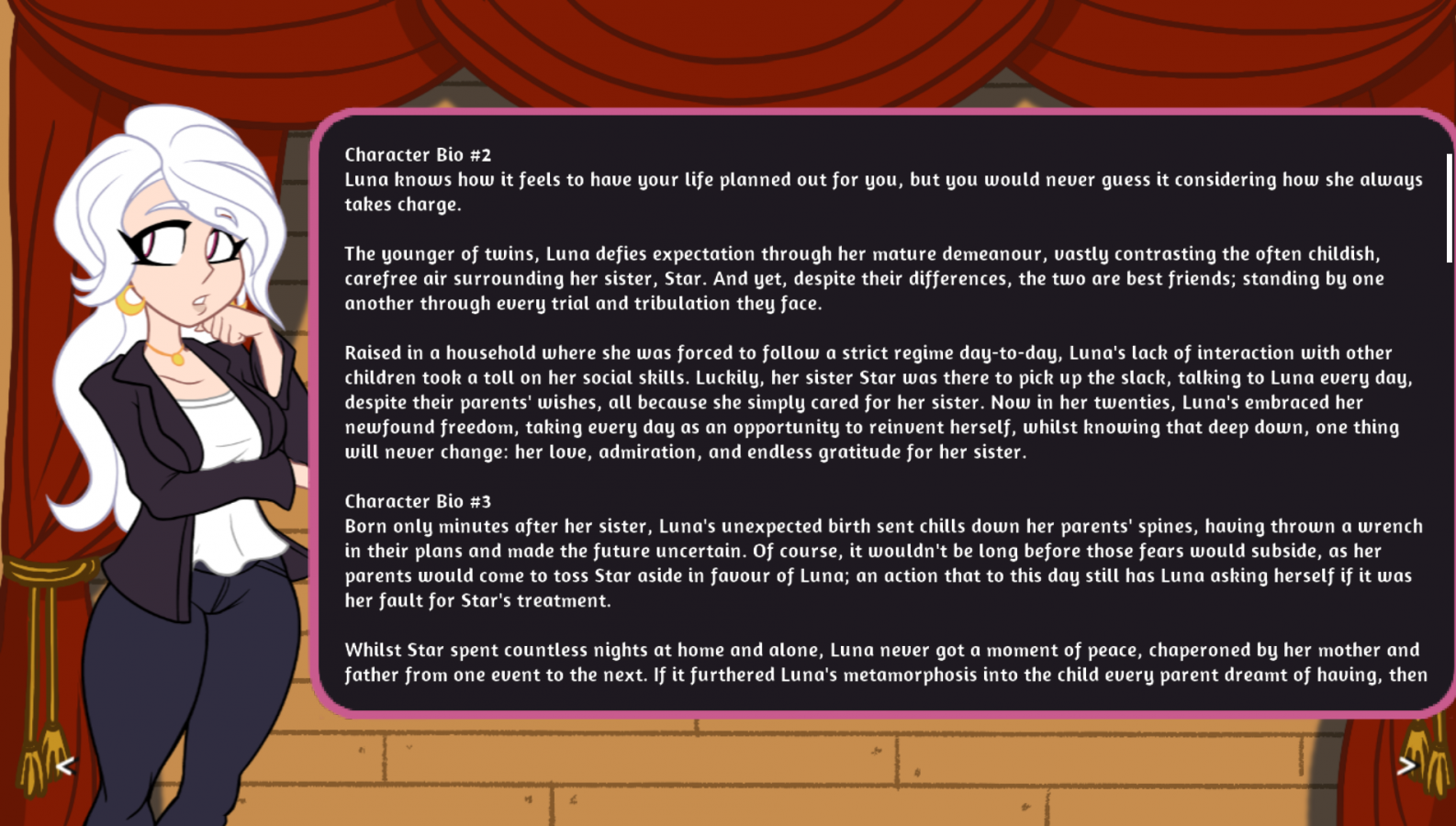 As mentioned earlier, the gameplay isn’t inherently hard, but it can take a little time to get used to. That, along with the quirky characters and bumping music, made the game a joy to play. The gameplay does get repetitive, especially if you replay stages on higher difficulties. Even so, I still played through all fifteen stages on beginner, intermediate, and expert. If you’re only playing to finish the game on one difficulty, it won’t take you very long. As a reference, playing all fifteen stages on three different difficulties took me around 4 1/2 to 5 hours. For a game costing $4.49, I’d say that’s a pretty good deal. I went into The Second Chance Strip Club feeling nervous of what I would get, but I walked out pleasantly surprised. It’s very odd, and definitely not for everyone, but it’s worth checking out, especially if you like rhythm games. Even while writing this, I keep hearing some of those songs looping in my head, almost tempting me to come back to the game. The Second Chance Strip Club comes out April 4th, so if you want to try it out for yourself, be sure to pick it up on Steam.

The Second Chance Strip Club is an odd yet surprisingly charming rhythm game about stripping. The gameplay is simple yet challenging, with a musical focus. The quirky characters and catchy beats are a treat, but don't expect much animation for the actual dancing.

Codi loves to play video games and watch movies. He will watch almost any kind of movie just to experience them. His ideas take inspiration from the shows and movies he watches, and games he plays. He also loves a good pun.
Related Articles: The Second Chance Strip Club
Share
Tweet
Share
Submit