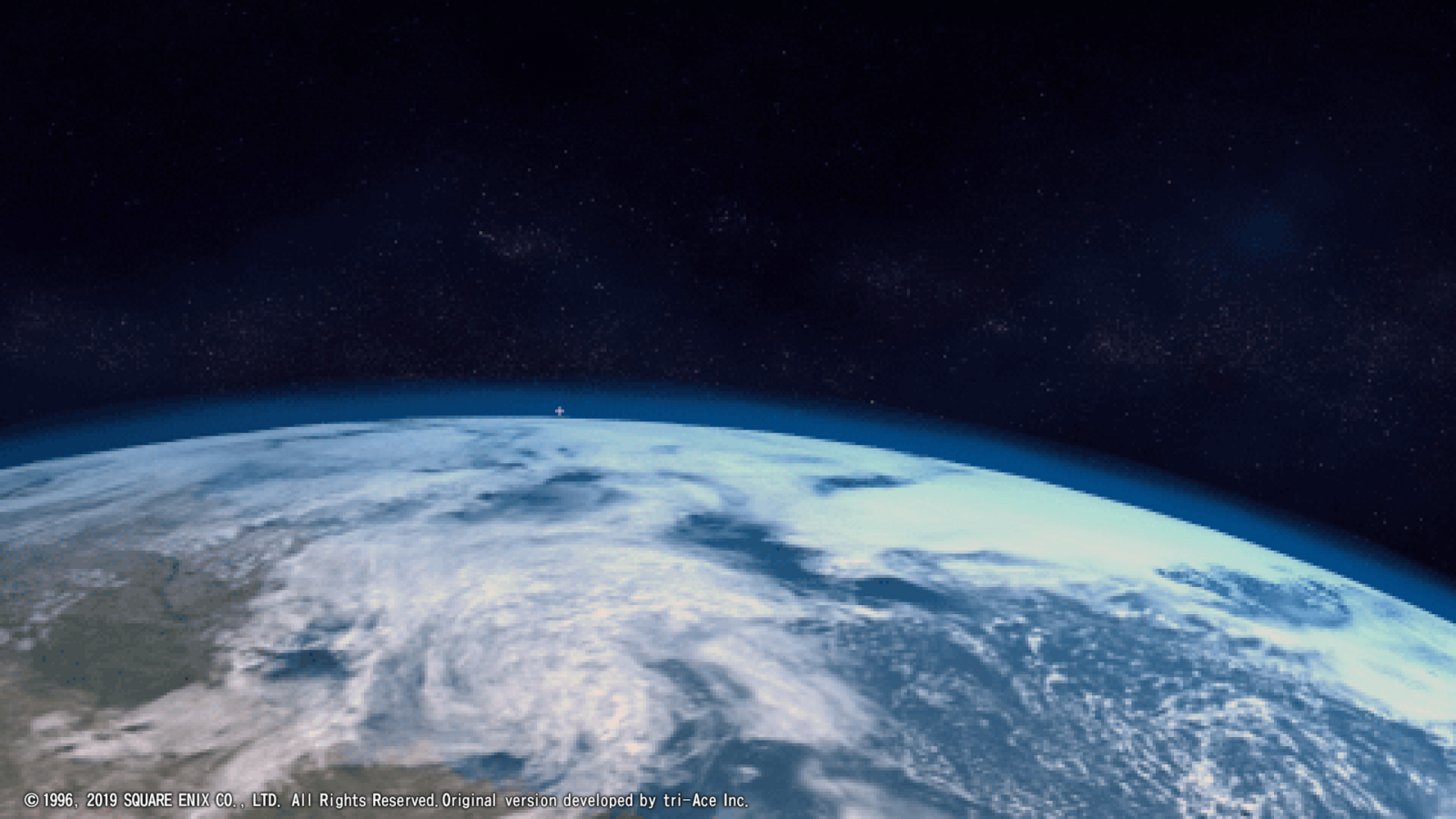 On the planet Roak, Roddick, Millie, and Dorn live a simple life as the defense force for their hometown when a plague turning the citizens to stone begins to spread. Searching for a cure on the nearby Mt. Metorx they encounter two strangers who appear from beams of light. The two humans, Ilia and Ronyx, inform the three that the disease is not native to their planet and was in fact planted there by enemies of the alliance. With Dorn having been infected by the disease, the group agrees to board the alien’s ship to try and develop a cure, knowing they may never be allowed to return home again.

The original Star Ocean was released on the SNES in 1996 to Japanese audiences. In 2007 the game was remade for the PSP with the subtitle First Departure and was the first version of the game to be released outside of Japan the following year. Now, that version is being remastered for the PlayStation 4 and Nintendo Switch, adding an R to its ever expanding moniker. As I’ve grown to love the JRPG genre and played my fair share of Final Fantasies, Dragon Quests, and Tales of games, the Star Ocean series has always been one that I’ve wanted to get around to playing, eventually, someday, maybe. After a… less than loved mainline entry and with the mobile game shutting down, I don’t think there’s a better place to start than with the first game, prettied up and rebalanced for current gen consoles. 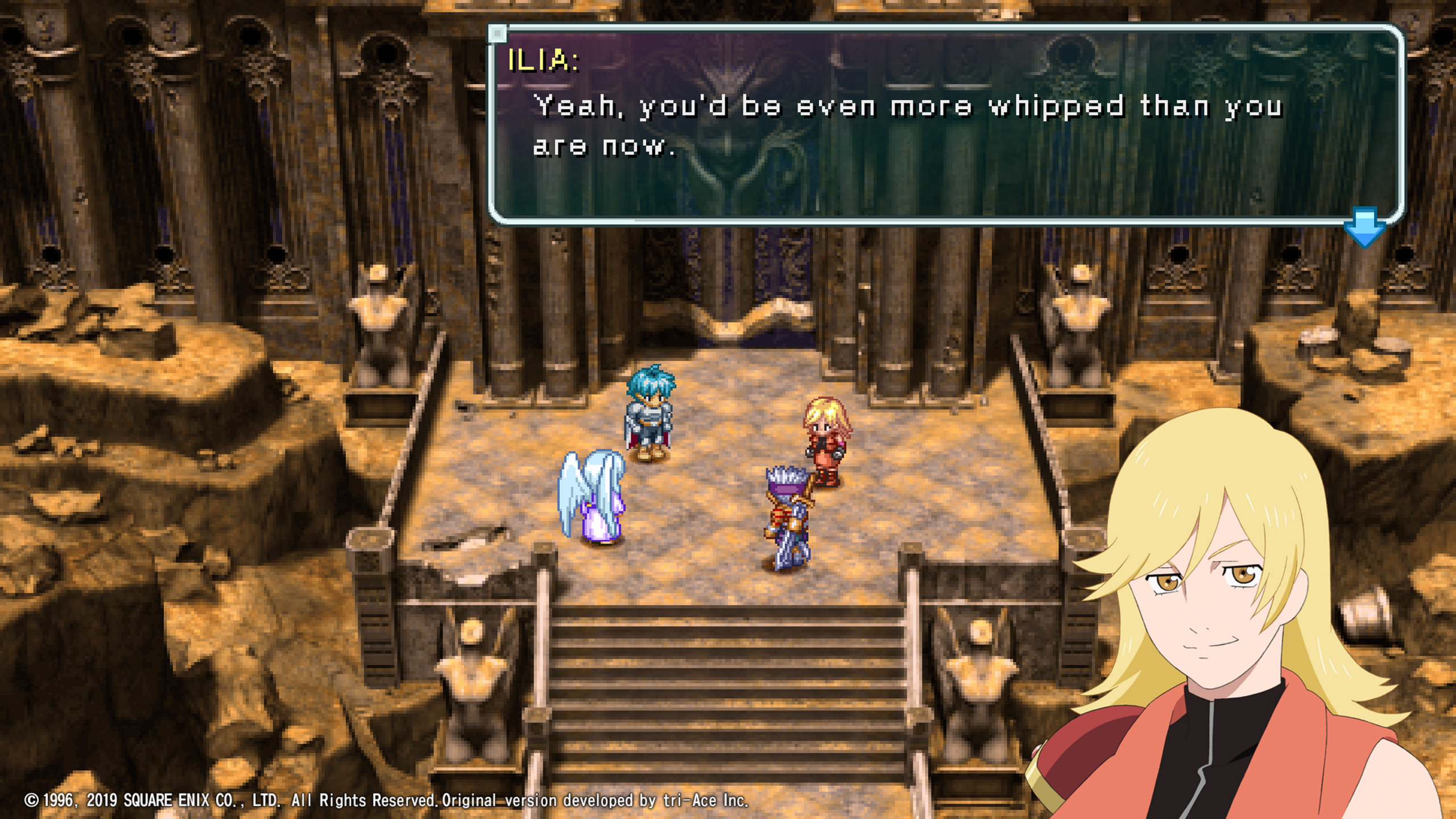 As someone who recently got into Star Trek: The Next Generation, the game’s premise is immediately interesting to me. It’s like the usual plot of the show, but in reverse: instead of following a space faring crew discovering new life on other planets, you are the new lifeforms. As interesting as the plot is in the first few hours, you’ll actually be spending 95% of the game on the same planet you start out on. Roak does become a fully fleshed out place as a result, but with a name like Star Ocean I would like to be able to explore the starry seas just a little bit.

While you are restricted to just the single atmosphere, the multitude of characters you’ll meet on Roak are all interesting and have their own reasons for joining your party. The muscular Cyuss wants to become stronger to prove himself to someone, Ioshua is searching for his younger sister, Mavelle is seeking revenge on the man who murdered her family, and Pericci just wants friends, just to name a few. The best part about all of these potential party members? You can only recruit four of them to your side in a single playthrough. The friends you make as well as the places you go can change the story in slight ways. First Departure R is also blissfully short in a world where 100 hour games are becoming the norm, and with around 80 endings you may want to play this one a few times. 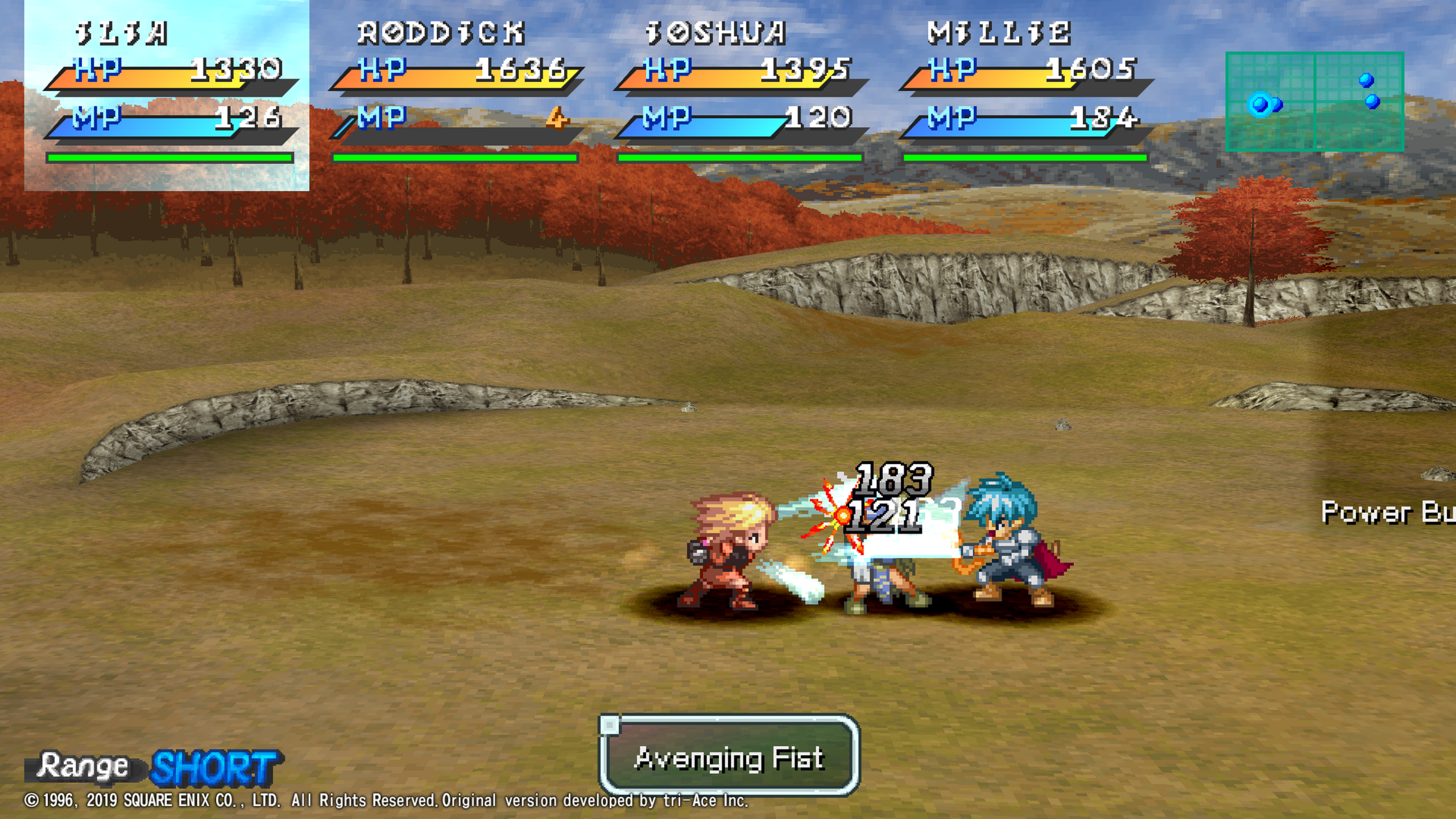 While I really enjoyed Star Ocean’s world, story, and characters, the same can’t be said for the battle system. In combat, you control one of four characters who enter the fray with you (I chose to play as Ilia, because who doesn’t want to punch dinosaurs and robots in the face). You move around, attack, use items, and cast spells in real time. Aside from casters who choose their spells from a menu, each character can only bring two special attacks into battle with them, so you have to choose carefully what type of attack you want with you for each situation. Unfortunately, the AI is dumb as rocks and will just spam the attacks you give them until they run out of MP, or in the case of healers attempt to cast a healing spell on a downed party member istead of reviving them. The strategy for every single battle essentially boils down to this: surround the enemy and, if the AI complies, pummel them senseless. If that doesn’t work you can either push through with an abundance of items or try and upgrade your equipment using the skills system.

In concept, the skill system could compliment a less simplistic battle system nicely. Upon leveling up, each character receives skill points that they can then put into a large variety of proficiencies including cooking, smithing, martial and even the musical arts. You can use these skills to increase stats, create items, or manipulate the random encounter rate. However, even if you have each skill maxed out in a certain discipline, you can and will, more often than not, fail. As an example, I was having a lot of trouble surviving the treasury dungeon, so I attempted to upgrade Roddick’s equipment to have a fighting chance. He has 10s in all the skills required for blacksmithing, so it should be a piece of cake reforging his sword right? Nope. It’s gone now. Eventually I resorted to saving before upgrading any and all equipment, which made the process much more tedious. The randomness inherent is using these skills leads to a lot of annoying moments similar to what I described. 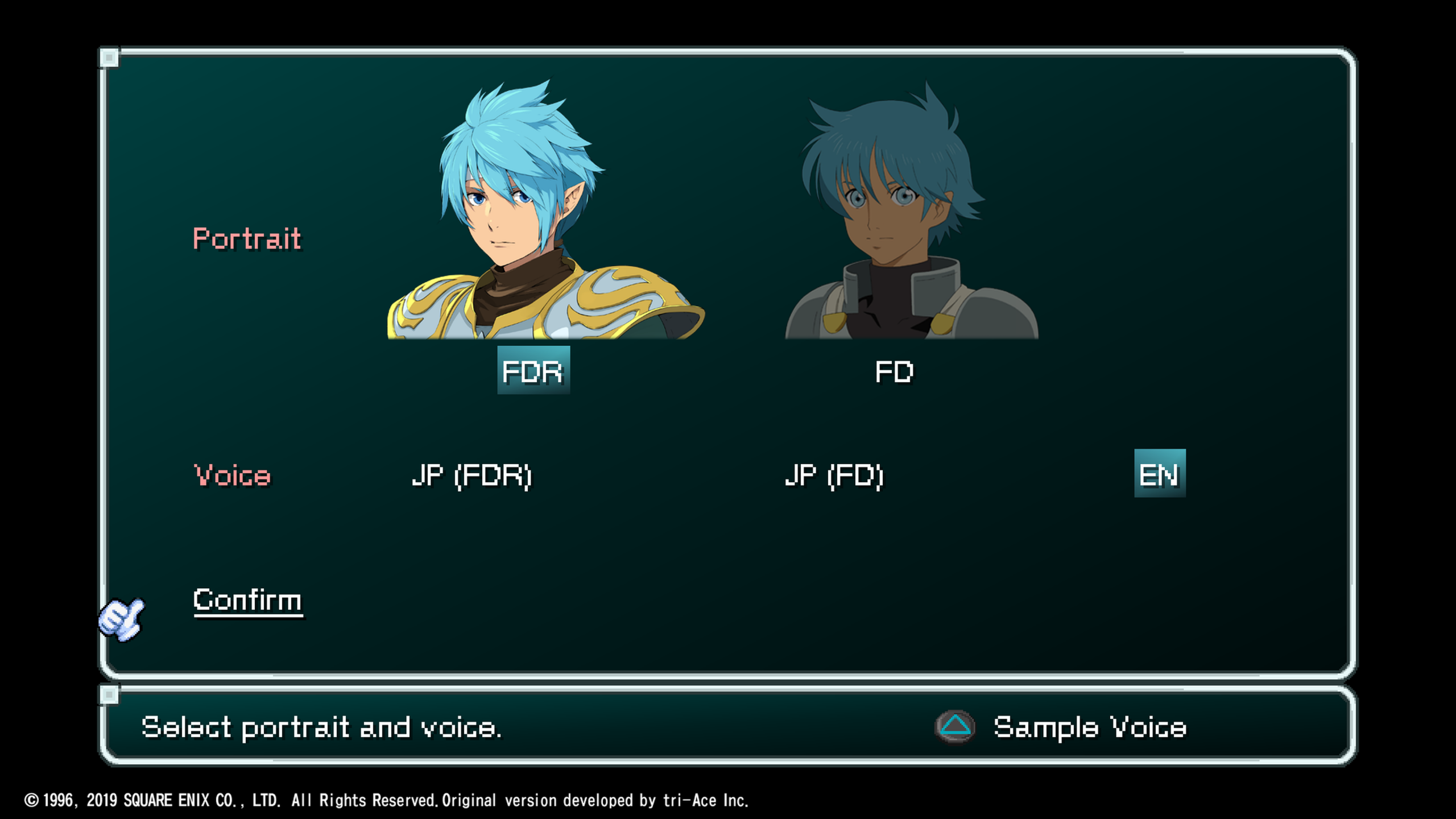 While there were a lot of annoyances, I still enjoyed the game and some of the additions to this new version are pretty cool. You can choose from one of two sets of portraits for characters as well as three different dubs for the plethora of voice acting. I ended up using the PSP portraits because I feel like they fit the in game sprites (which are beautifully animated), and the English dub, because I haven’t learned Japanese yet. You can also hold the R2 (or equivalent) button to move faster around the world, which is incredibly convenient and I can’t imagine playing this game without it. Finally, the game’s balance has been tweaked: while I didn’t have any trouble with the first two thirds of the game, and every boss was a joke, encounters in the final five or so dungeons can leave you drained of both HP and MP if you’re not prepared.

Star Ocean: First Departure R is an above average game that has the potential to be great. While the story, characters, and world are fun to experience, a dull battle system, uncooperative AI, and reliance on random chance bring it down too much.

David is the kind of person to wear his heart on his sleeve. He can find positives in anything, like this is a person who loved Star Fox Zero to death. You’ll see him playing all kinds of games: AAAs, Indies, game jam games, games of all genres, and writing about them! Here. On this website. When not writing or playing games, you can find David making music, games, or enjoying a good book. David’s favorite games include NieR: Automata, Mother 3, and Gravity Rush.
Related Articles: STAR OCEAN First Departure R
Share
Tweet
Share
Submit