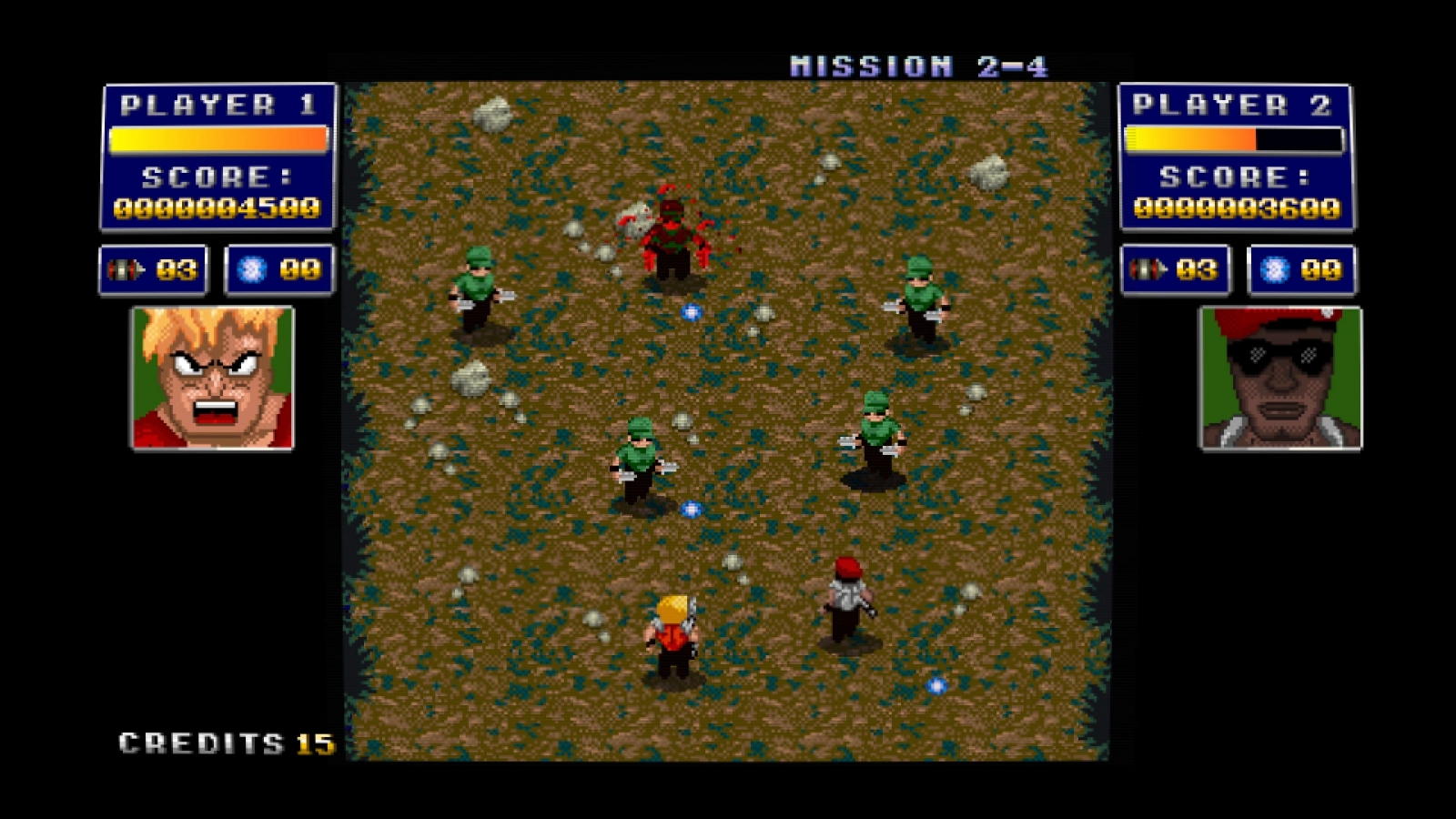 Contra, Ikari Warriors, Commando – odds are you’ve played and loved at least one of these games. All were released during the heyday of the Run ‘n Gun genre in the ‘80s and are rightly considered classics. Thunderflash, developed by Seep and published by Rataliaka Games, is hoping to recapture some of that ‘80s magic by crafting a pixel perfect homage to the genre.

In Thunderflash players take the reins of either Sergeant Rock or Sergeant Stan, members of a highly specialized task force, called Team Thunderflash, created to hunt down terrorists. You are called on by the US Defense Department to travel to Kashmir and capture members of a criminal organization named Bloody Wolf, who has stolen technology from the US. To make matters worse, Bloody Wolf are using an experimental chip capable of altering human behavior, allowing them to convert soldiers into their unwilling pawns. Your targets are Prizrak, an elite terrorist with unexplained powers, and Bulldozzer, an American mercenary with mad ambitions. 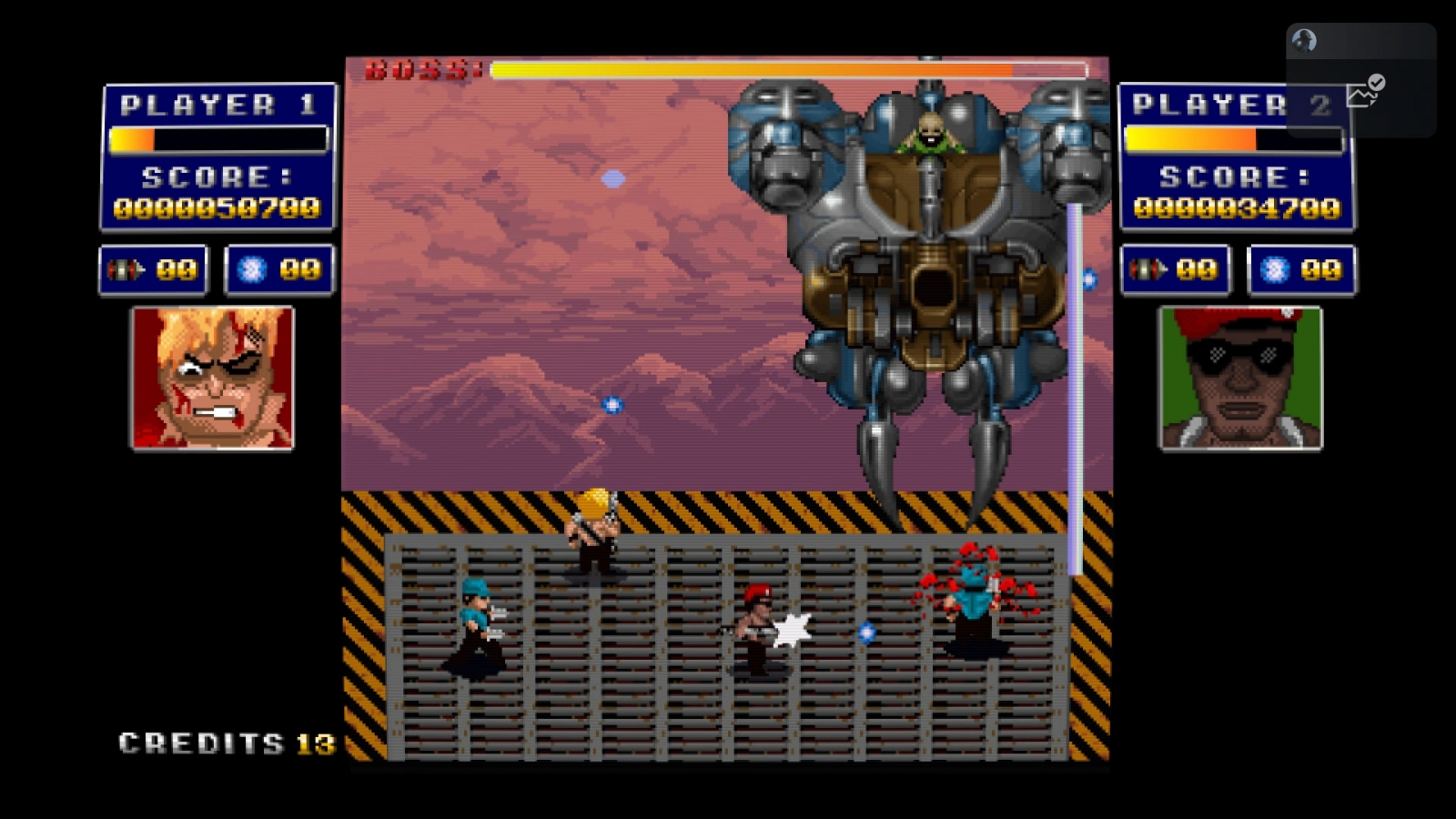 Before tackling the main missions you are given an option screen which allows you to choose how many credits you’ll begin with as well as toggle a CRT mode. At first, you are only given the option for 10 credits, but as you progress and fail new options unlock for 15 credits and then 20. When playing co-op these credits are shared between players.

The gameplay is exactly what you expect from a Run ‘n Gun. You battle your way, either solo or with a friend via couch co-op, through multi-tiered vertical and horizontal levels tackling an ever increasing onslaught of enemies. All the usual suspects are here; flamethrower enemies, electric traps, land mines, bombs falling from planes, grenade throwers, tanks, and an assortment of bosses. 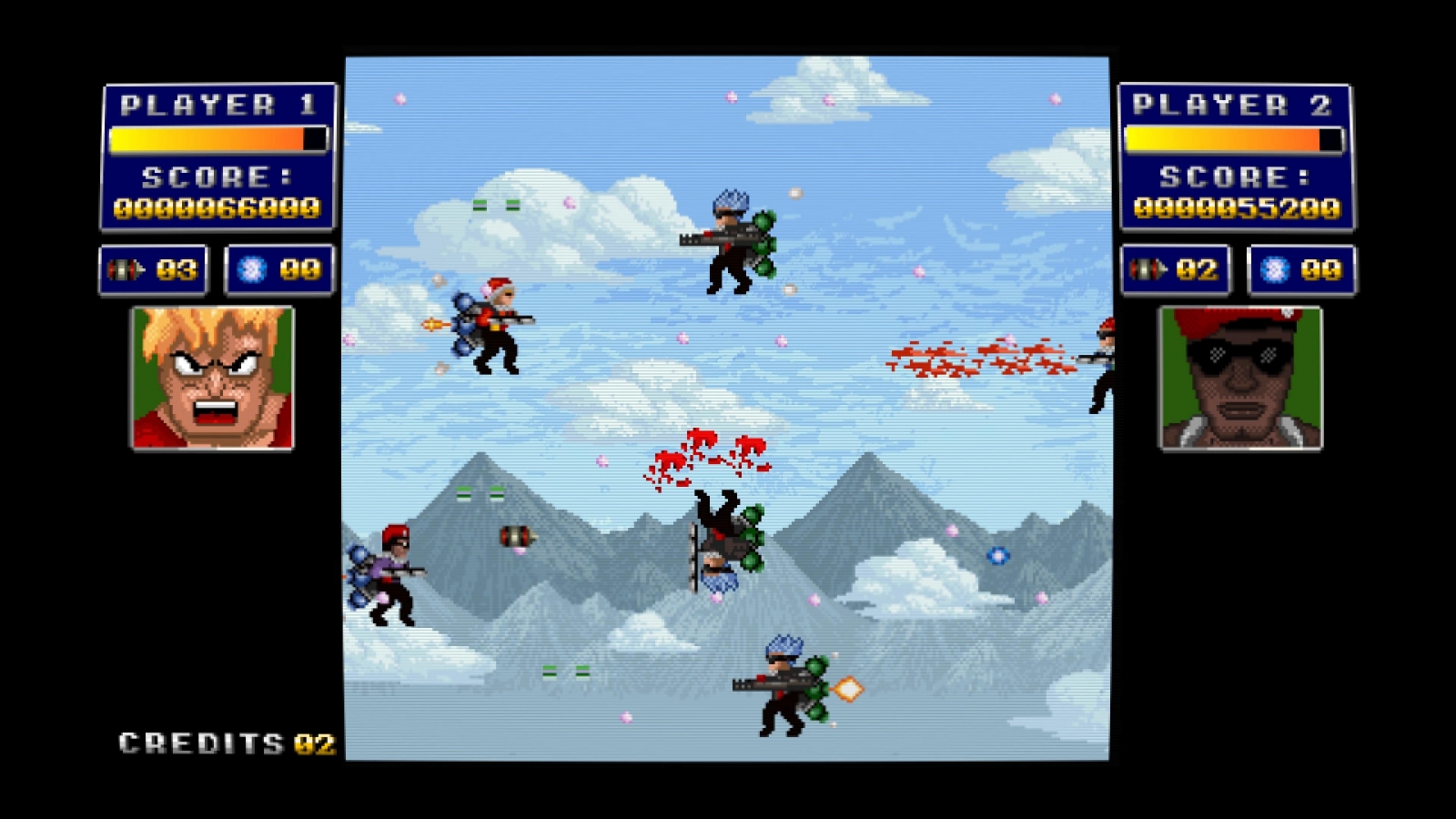 Barrels are scattered throughout offering health, a new weapon, or – in the case of red barrels – death. Your main weapon is an extremely slow gun, capable of killing enemies but more likely to get you killed, and a rocket launcher, for which you are given 3 shots with each life. Thankfully, a flamethrower, spread shot, and a machine gun are also available, although each is limited to a set amount of shots before you must switch back to your base gun.

I enjoyed the various weapon power-ups, but your time with them is too short-lived. A better base gun, or more chances to receive an updated weapon, would have gone a long way to making the game more enjoyable.

Thankfully, the levels are varied and see players fighting their way through villages, across bridges, up ladders while dodging attacks from all sides, through rivers, and even riding boats, jet packs, and a motorcycle, keeping Thunderflash fresh throughout its hour or so campaign. 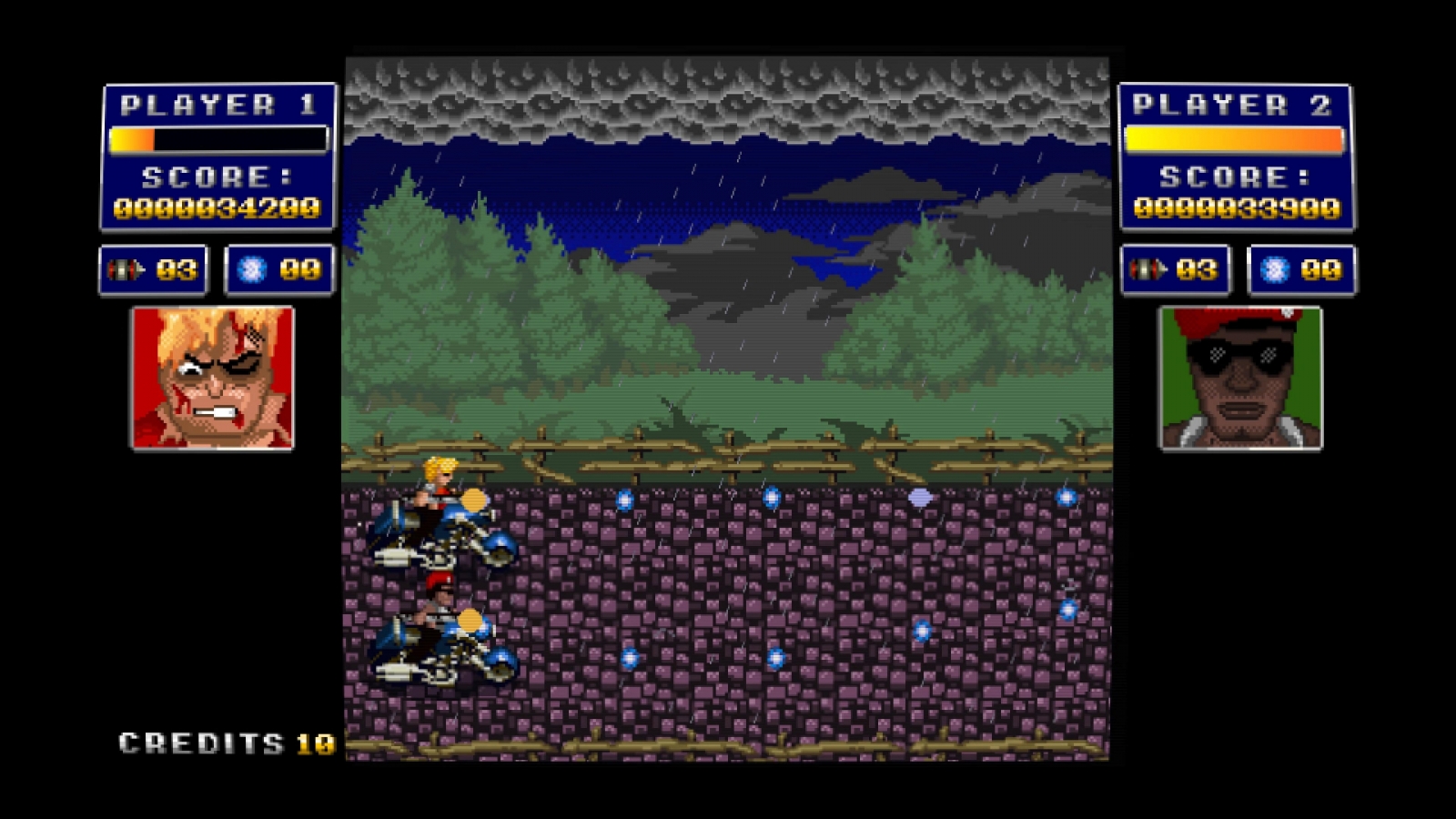 Unfortunately, the game is over right around the time players start falling for its retro charm. There are only 5 missions, each with 4 sections and a boss. If you encounter a game over, you can choose to begin again from the start or use the extremely forgiving stage select option to return to the exact section of the level where you encountered a game over at. While some may enjoy the challenge of attempting to beat the game in one go, most will have no issues using the stage select option. For completionists, there is a bonus story section unlocked for completing the game without using the stage select option.

Ultimately, while fun, Thunderflash is not up to par with the classics. This is mainly due to lack of nostalgia, as Thunderflash plays almost identical to past releases in the genre. While it is easy to forgive the classics for their shortfalls, it is much harder to accept a modern release for the same issues. Slow movement and an inability to aim in all directions are a couple of gameplay elements that players are not as willing to accept now as they were in the past. 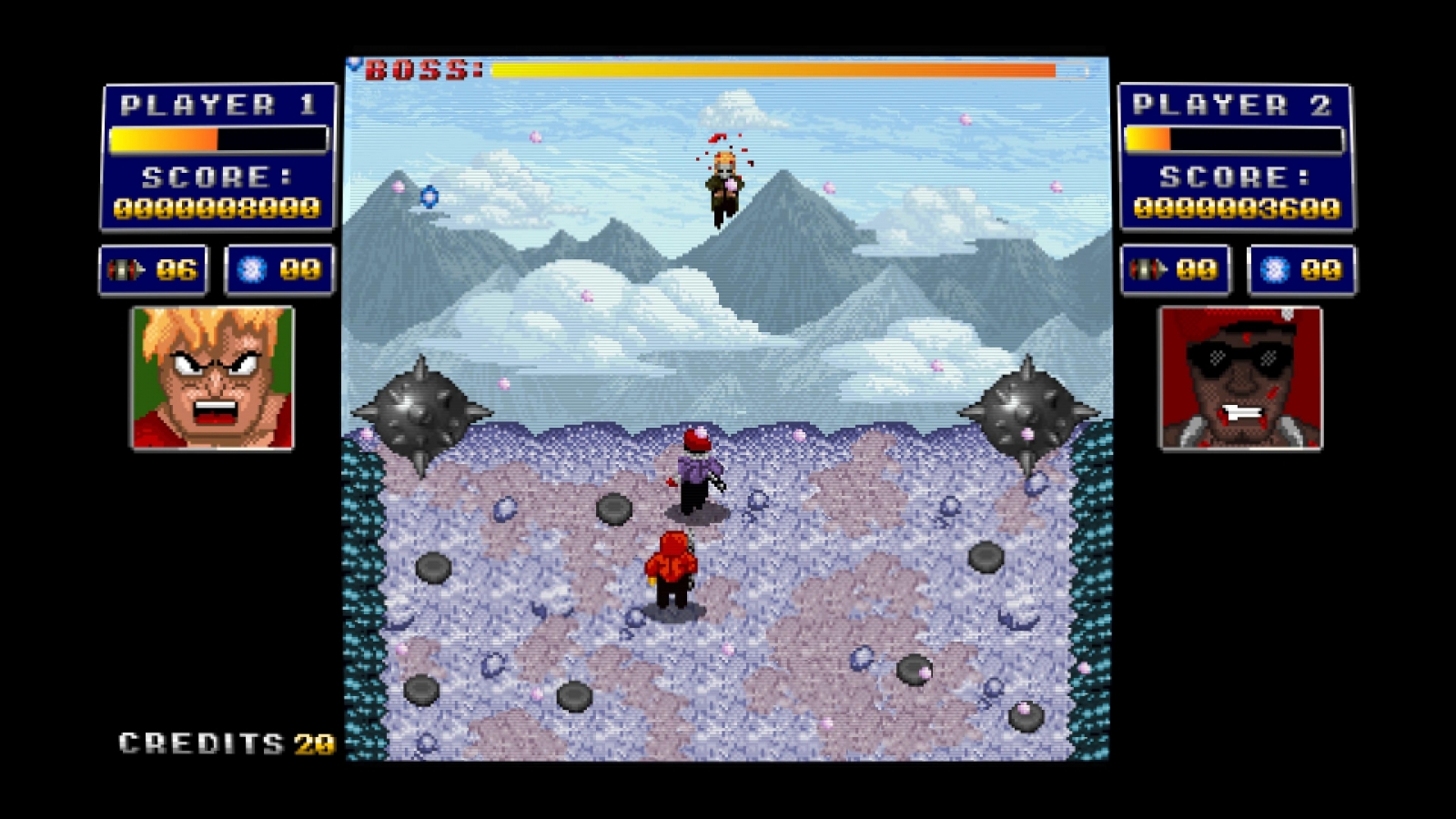 With a few tweaks Seep could have improved upon these issues, helping bring the genre into the present while still maintaining an 80’s vibe. Simple fixes such as 360 degree aiming and a faster base speed would prevent many unnecessary deaths. I get that these types of games are supposed to be hard but dying because you cannot find the right angle to shoot an enemy while they batter you with shots is frustrating.

Aside from the main game, there is a boss mode that unlocks after completion, and a survival mode which pits players against a never-ending stream of drones in a small arena. Each drone kill grants players one point and various weapons and health power-ups will appear in the middle of the arena to help you overcome the challenge.  Before beginning a match you can choose the music, character, and outfit you want. Each outfit is pulled directly from the various levels of the game and has different attributes for armor, speed, and power, adding a bit of strategy to what is otherwise a straightforward play mode. 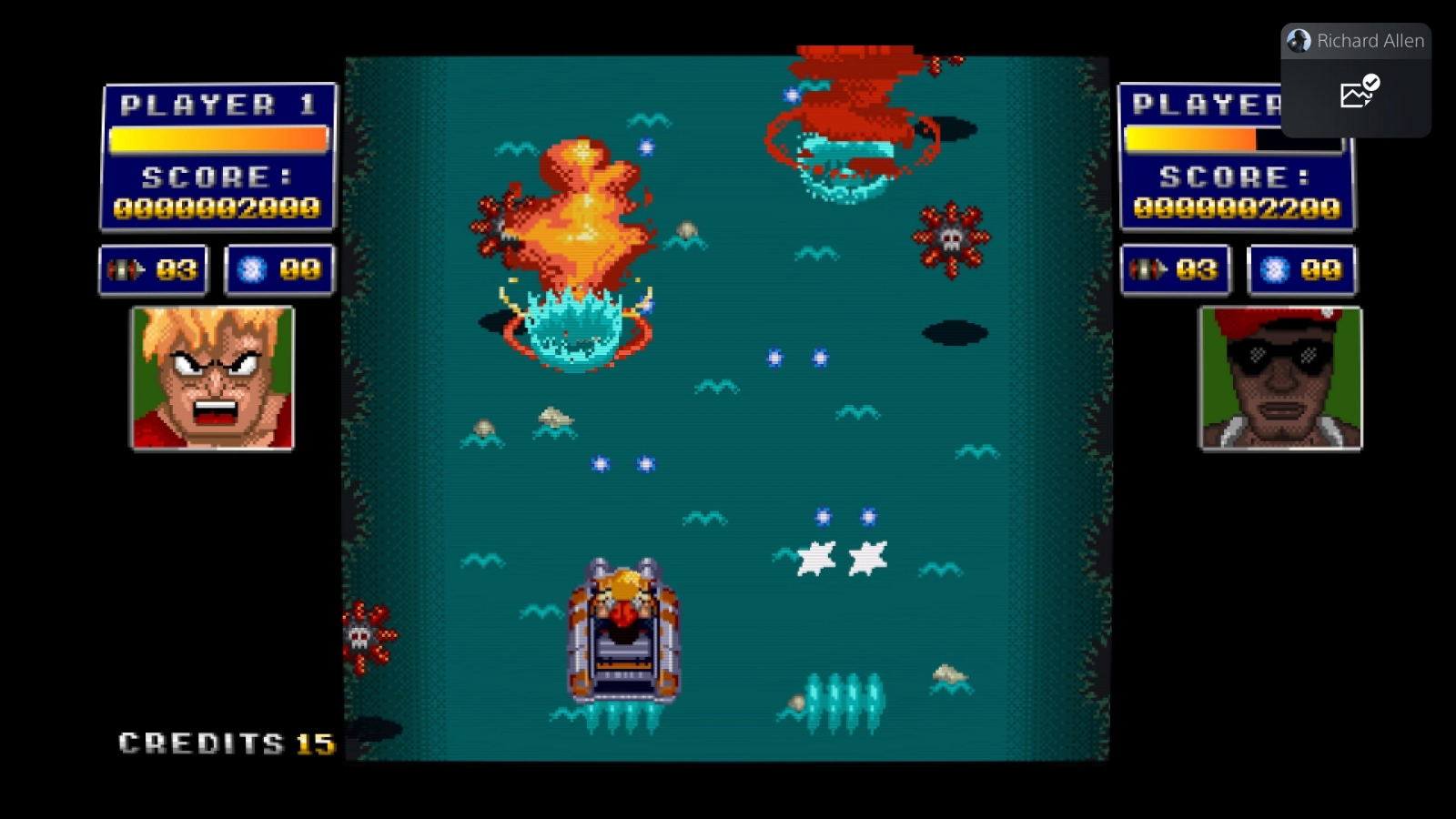 Both boss rush mode and survival mode are nice additions to the game and add some much needed replayability, but will only keep players entertained for a couple hours at most.

The charm and real power of Thunderflash comes from its extreme homage to the retro era and the addition of co-op. Graphics are somewhere between an 8-bit and 16-bit style, with detail closer to an SNES release, while maintaining  gameplay from the NES period. The ability to play through the campaign and various modes with a friend help tremendously in allowing players to overlook the flaws and just enjoy the experience.

Thunderflash is a highly competent, if uninspired release. While I enjoyed my hour long playthrough and a round or two of Survival mode, I couldn’t help but feel that the release as a whole was a missed opportunity to not only bring back the Run ‘n Gun genre, but to innovate and create something more complex. Still, as a co-op experience, it is well worth playing but unfortunately will be forgotten soon after completion.