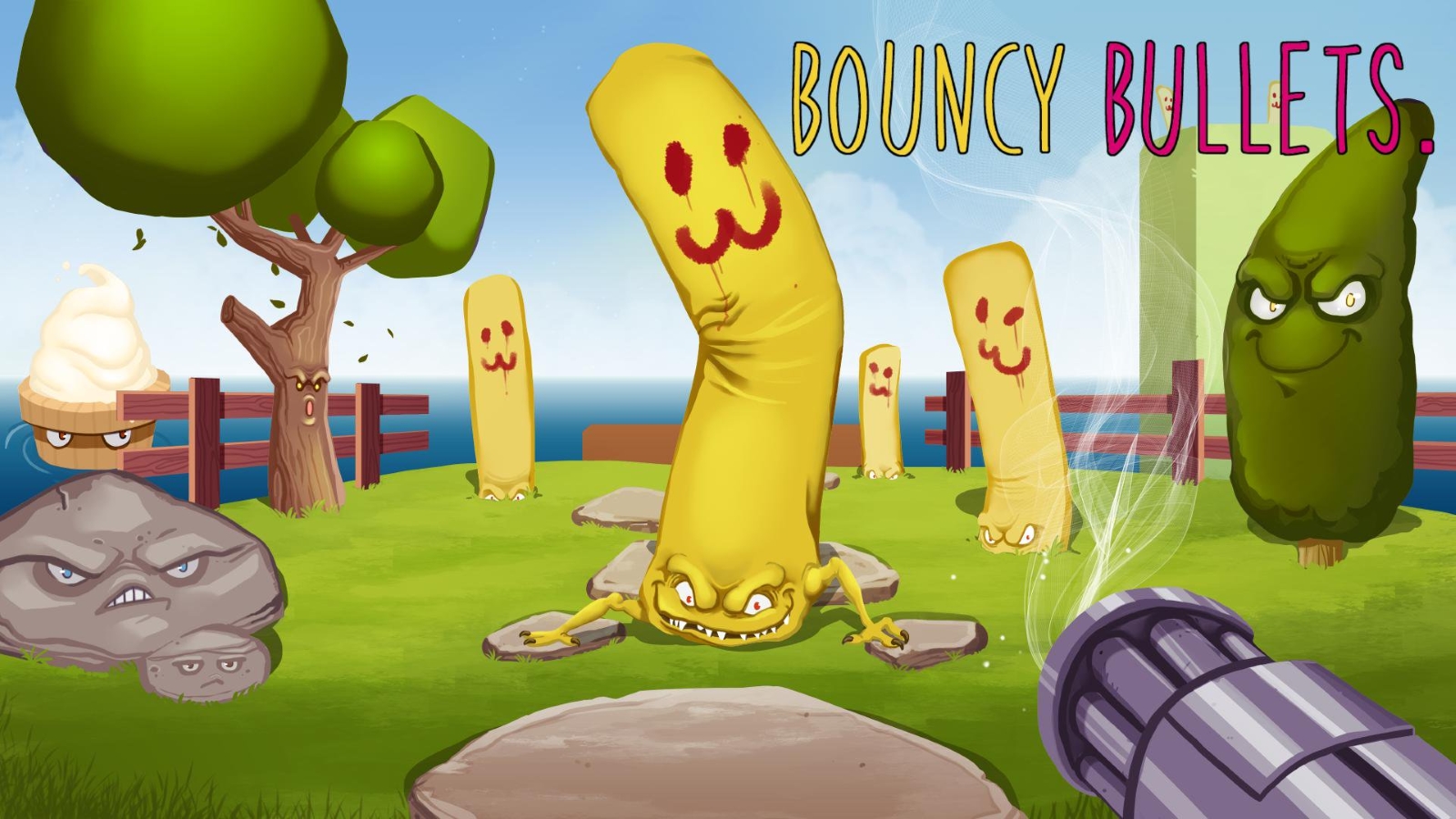 Have you ever wanted to feel the strange juxtaposition between being surrounded by a cutesy environment, with bubbly music, while simultaneously feeling the white-hot anger of the gods coursing through your veins? Then Bouncy Bullets is the game for you. Developed by Petite Games, Bouncy Bullets is a first-person puzzle platformer that utilizes a cartoon aesthetic to mask some difficult gameplay. Now, the game—at least on the surface—isn’t difficult per se. In fact, it’s pretty simple: just get to the end within a certain amount of time, as specified by the level, in order to earn between one and three stars.

Earning one star is easy and takes minimal effort on your part, but those three-star attempts are the runs that make you question why exactly you’re continuing to put yourself through so much agony. 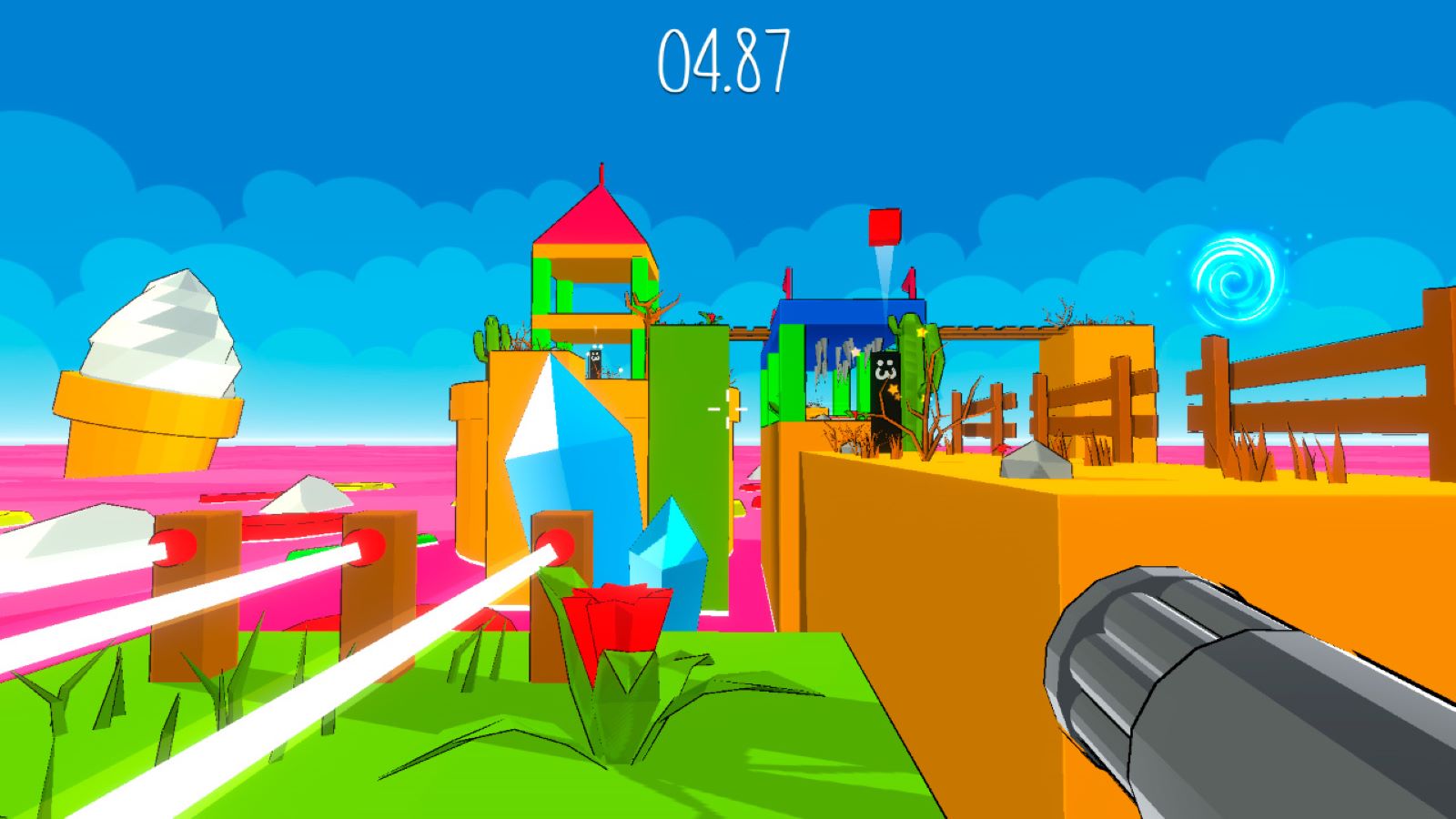 Now, I’m going to level with you here. I’ve never been what you’d call ‘good’ at platforming games—especially now that I’m older—so take what I’ve said about difficulty with a grain of salt, but I did go through and three-star all the levels—including the secret ones—in direct contradiction to my own sanity. Why did I do that, you ask? Because I’m a professional. With that being said, let’s dive into the mechanics of the game.

As stated above, this is a FPS platformer with slight puzzle elements, meaning that the core mechanics of the game are jumping and shooting. Surprising, I know, that a game titled Bouncy Bullets’ primary gameplay would be centered around those two aspects.

Movement feels floaty and can be a little frustrating from time to time—especially when you’re attempting some of those three-star runs. When landing the character slips and slides all over the place, almost as if the platforms are composed completely of ice. Because of this there are many situations when you’ll go to make a jump and slide right off the edge, sending you back to the beginning. Although this can be quite annoying from time to time, it appears as though the design was intentional. As I mentioned, getting a single star in any level is quite easy—just take your time and you’ll get it—but the specific movement design is what makes getting three-stars difficult, and specifically frustrating, but not necessarily in a bad way. Here I’m going to hit you with a pro-tip. While in the air you can turn left and right faster than you would when standing on the ground. This is completely necessary if you plan on getting three stars on all the levels since, in those runs, every second counts against you. 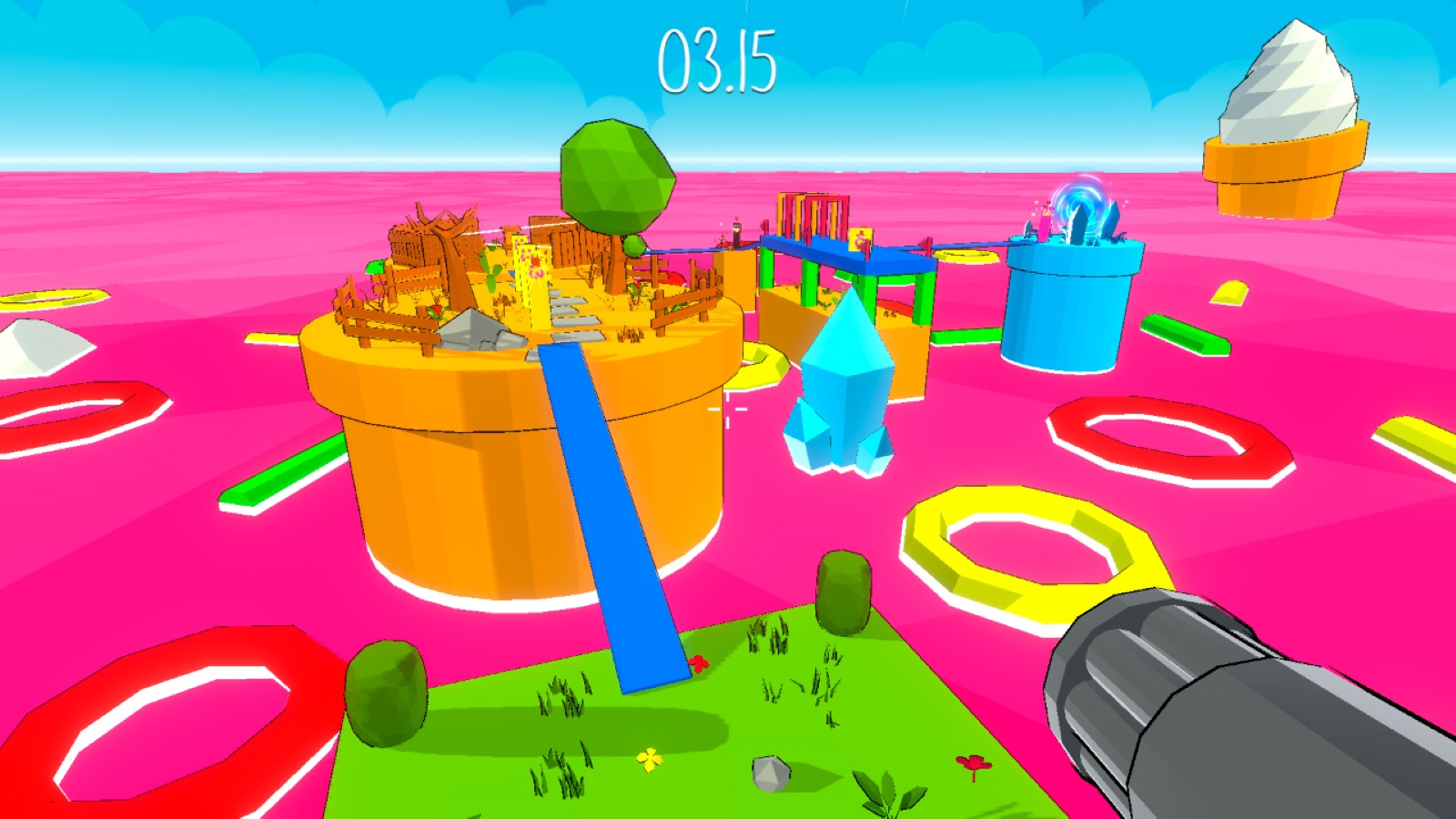 The floaty, and overall loose movement makes the precise placement of jumps that you’ll need to make on your way to the high score severely difficult. So, rather than the game itself being difficult, it is the speed by which you’ll need to complete some levels coupled with the slippery controls that makes you want to tear your hair out.

Secondary to the movement, you are also provided with a Mega Man-esque arm cannon that shoots either purple or yellow colored blocks. Primarily, this gun is utilized for taking out specific obstacles that are spread throughout the courses. In each level, sets of yellow/purple blocks, well, block your way and you’ll need to shoot them with the corresponding color of your fancy cannon in order to clear them out of your way. Along with that you’ll also have purple, yellow, and black enemies that will shoot at you while you move about the area. In the same vein as the blocks, you’ll need to hit those with the correct color to take them out—except for the black enemies which you’ll need to hit with a bounce shot with either color to destroy.

When it comes to the shooting mechanic of Bouncy Bullets, I’ve found that precision is most certainly not the name of the game. Although, I’m sure it helps to have the twitch reflexes of a pre-teen Fortnite master, at the ripe old age of 28 I felt comfortable spamming the right and left triggers while speeding through the level. 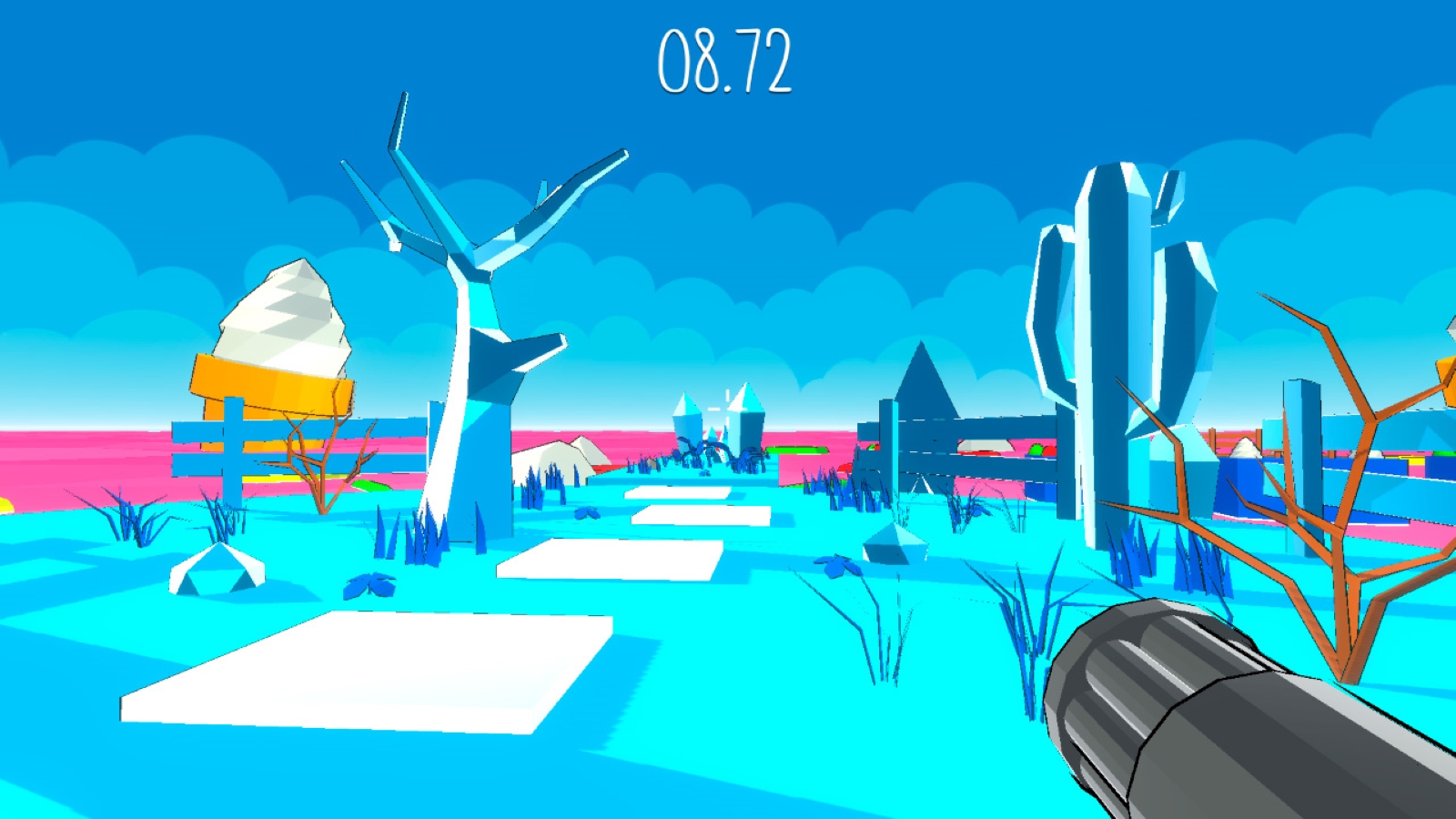 It turns out my ineptitude was highly effective–which is nice since I was so terrible at the platforming of the game—in clearing most levels using this method, however those happy looking block people were not the only items keeping you from the end. Be prepared to utilize bounce pads to hop about the levels and avoid spikes that I died an embarrassing amount of times on as well as lasers that are, honestly, the easiest obstacles to get around.

With all that out there to kill you, it sure was nice of the developers to make loading times between deaths quick and easy. My only minor complaint is that if you complete a level with less than three stars and you want to retry instantly, you’ll have to be careful not to accidentally mash the ‘X’ button since that will send you to the next level. If that happens, you’ll have to back out to the main menu and reenter the level from there—which is quick as well. 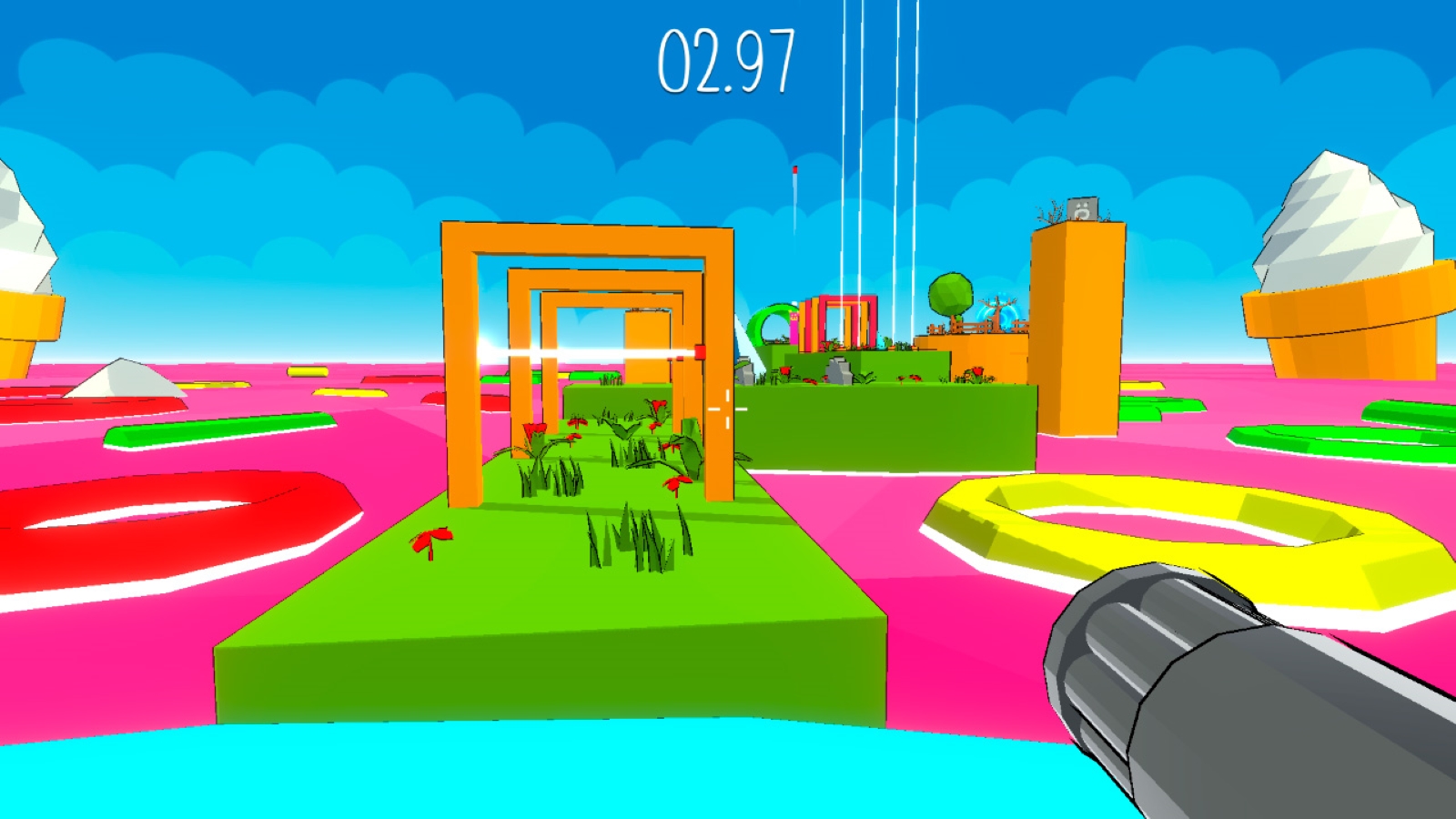 All in all, I’d give Bouncy Bullets a “Fortnite kid doing the Floss over your dropped loot” out of ten. Sure, at first it’s a little cute and a bit of fun, but the longer you stare at the cuddly façade, the more you’ll notice that your hair is getting a little greyer and the creeping thought of telling those kids to ‘get off your lawn’ begins to set in. Such is the case with Bouncy Bullets; the bubbly music combined with the vibrant colors seems fun at first, but as you bash your head against the wall over and over again, just trying one more time to get that three-star rating, you’ll feel the inevitable existential dread of old age, enveloping you in it’s icy grasp, greeting you with a breathy whisper of “git gud.” Which, as far as I’m concerned, are the best kinds of games.

Bouncy Bullets can seem a bit easy if you’re not looking to three-star every level, but it presents a nice challenge for those who are willing to put in a bit of time and effort. The game is short, but that may be to its advantage as that difficulty can easily turn some people off in large quantities.