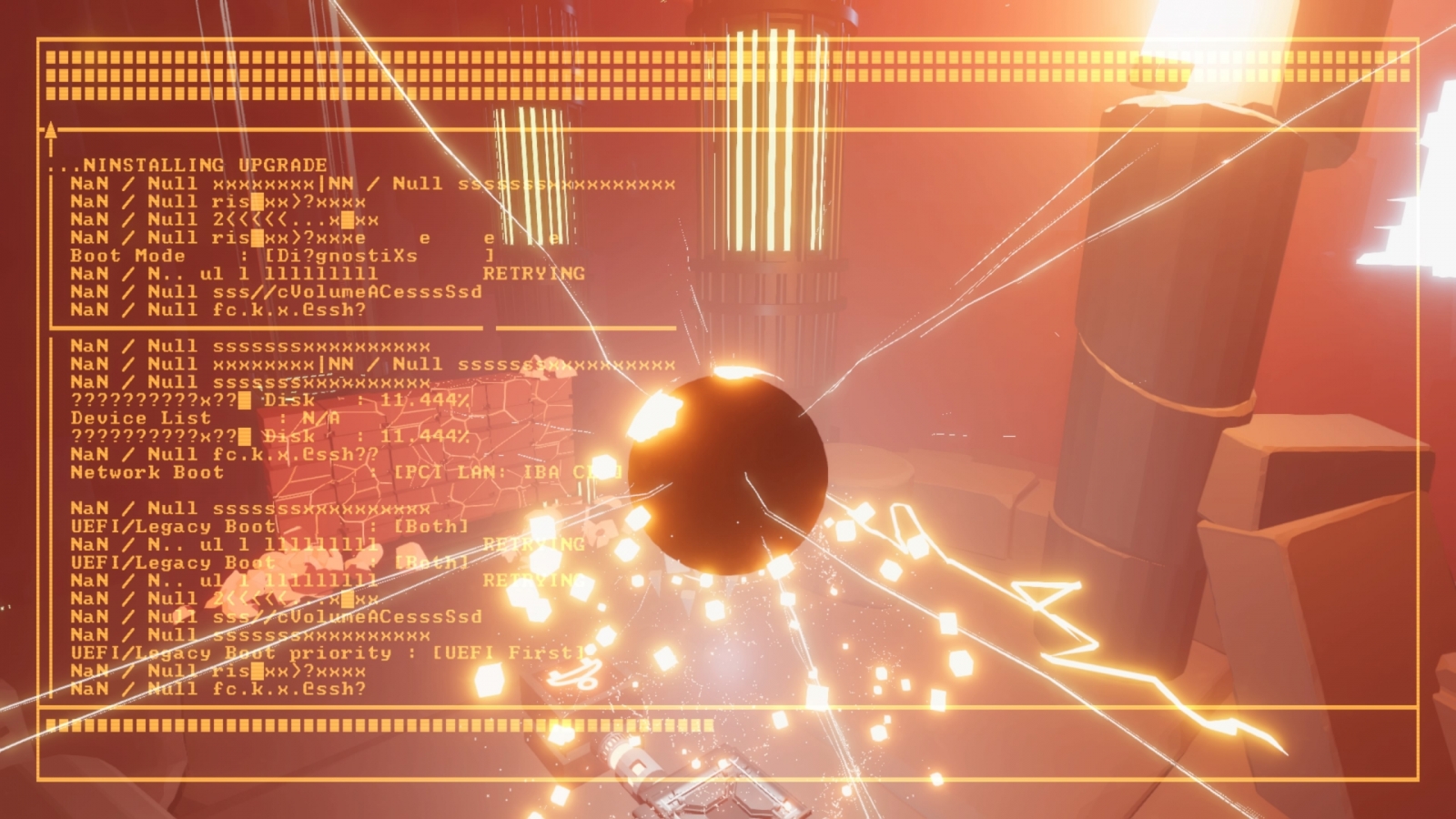 Hacking has many creative interpretations in media. While in reality it’s pretty dull, movies and TV have presented it as people furiously typing, using an avatar to explore a matrix-like space, and much more. On the surface, this is what makes Recompile exciting — an exploration based platformer where you play as a program trying to access hidden information in a mainframe. Due to poor controls and haphazard level design, however, the game ends up just as tedious as real world hacking.

Starting off the game, you only have the ability to move, not even jump which is an interesting idea for a metroidvania. Over the course of the tutorial level, you’ll gain a jump as well as a gun to defeat enemies. Put simply, controlling the Program is far too slippery to navigate the game’s “naturally” designed environments. This is supposed to be a digital space, but each area has a sort of industrial look to it like it was actually built from computer parts. Again, it’s an interesting concept but in practice it’s difficult to tell where you’re supposed to go if you can even see it thanks to the copious amount of bloom. Since some platforms are weirdly small or have a strange shape, you end up going everywhere you can and hoping it was the intended route. It’s great from a storytelling/theming perspective, but doesn’t cut it in terms of gameplay.

The storytelling is perhaps the best part of the game. It’s almost entirely told through text logs the characters recorded through the Mainframe’s AI before the events of the game. It reminds me a lot of Tacoma, actually, especially in how the human characters interact with the AI and teach it human concepts you can’t exactly program. For example, in one early log a character points at an object and asks the computer to define it, and the AI, Hypervisor, doesn’t understand that it’s supposed to follow the line of their finger. After seeing this, it’s fun to observe the contrast between Hypervisor’s naive state and the current, unhinged monologues you occasionally get when exploring.

To further your exploration, you can acquire various abilities for movement, combat, and hacking such as a teleporting dash or a shotgun. The hacking abilities are much more interesting, however, the first one you get actually gives you an entirely new menu where you can view the map or examine nearby objects to determine their function. There are quite a few pipe puzzles and the game doesn’t tell you what nodes do otherwise, so this is very useful and a novel implementation of the hacking ideas. 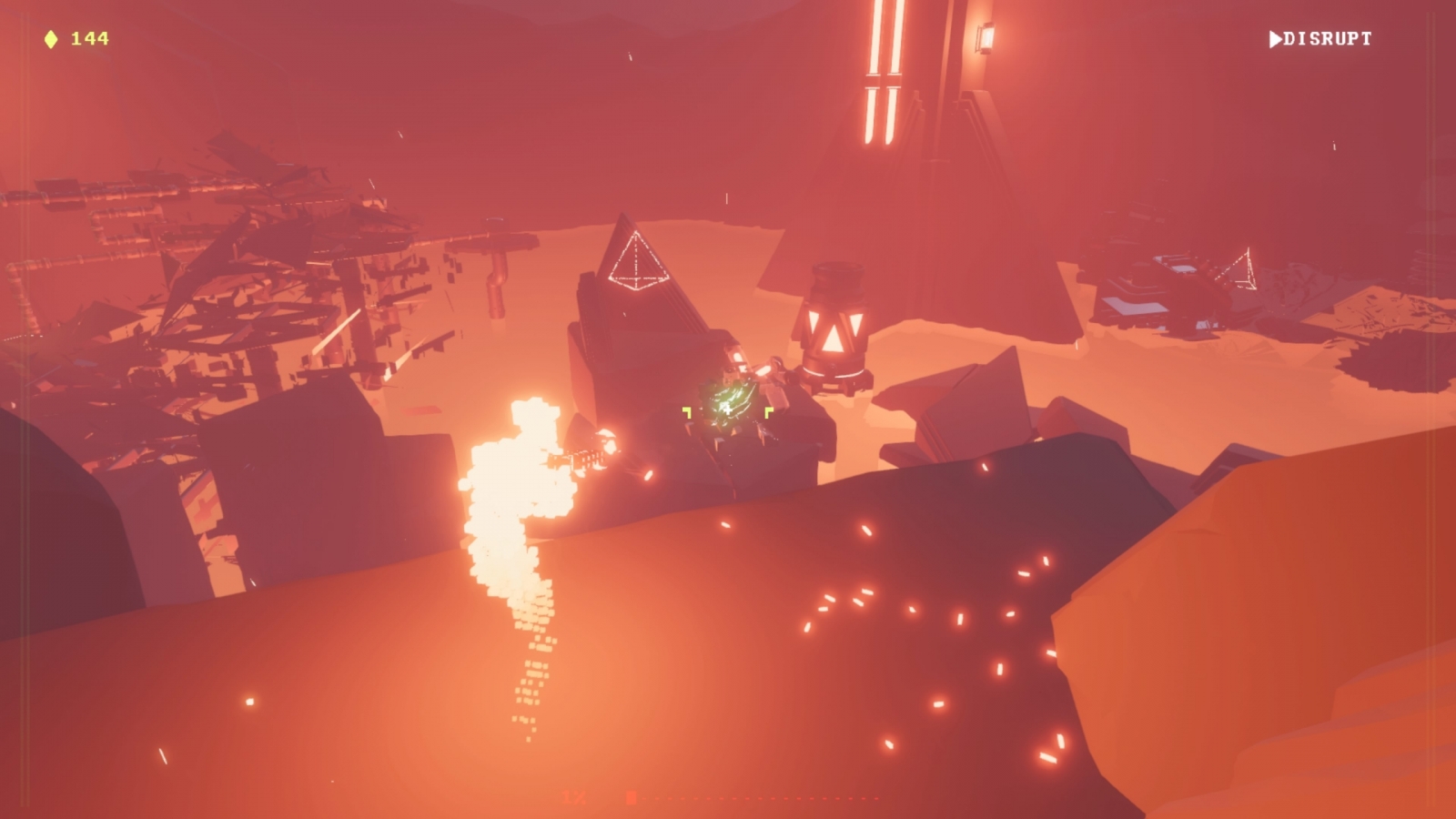 Going back to the combat, none of the guns feel particularly good to use. You move very slowly while aiming, enemies fly and fire quickly, and your weapons feel ineffective. I think the idea was to have you stop aiming and dodge while they’re reloading, but the breaks are too short and aiming is too slippery to properly target them so you end up standing there and hoping your shots hit. This usually ends in you dying, so you may try to snipe them from afar. It doesn’t always work though, since they frequently hide behind cover before activating, so you’ll have to rely on prayer to kill them fast enough to heal you in time to take out the next one.

If you’re trying to solve a puzzle though, all bets are off: enemies spawn infinitely until you complete it. Needless to say, this is infuriating. Unless you want to die repeatedly, you need to know the solution before you even start, and execute it while you’re wrestling with the terrible combat. It’s rare that I don’t finish a game I’m reviewing, but Recompile made me so mad I needed to put down the controller, calm down, and organize my thoughts. This is a game that wants to combine old school difficulty with modern gameplay mechanics, but stumbles on both fronts. The ideas are great on paper, but it’s hard to recommend a game off ideas alone.

Recompile brings a lot of great ideas to the table, but none of them work well together in their implementation. While it presents an interesting story, you’d have to wade through the immensely frustrating gameplay to get there.

David is the kind of person to wear his heart on his sleeve. He can find positives in anything, like this is a person who loved Star Fox Zero to death. You’ll see him playing all kinds of games: AAAs, Indies, game jam games, games of all genres, and writing about them! Here. On this website. When not writing or playing games, you can find David making music, games, or enjoying a good book. David’s favorite games include NieR: Automata, Mother 3, and Gravity Rush.
Related Articles: Indies, Recompile
Share
Tweet
Share
Submit