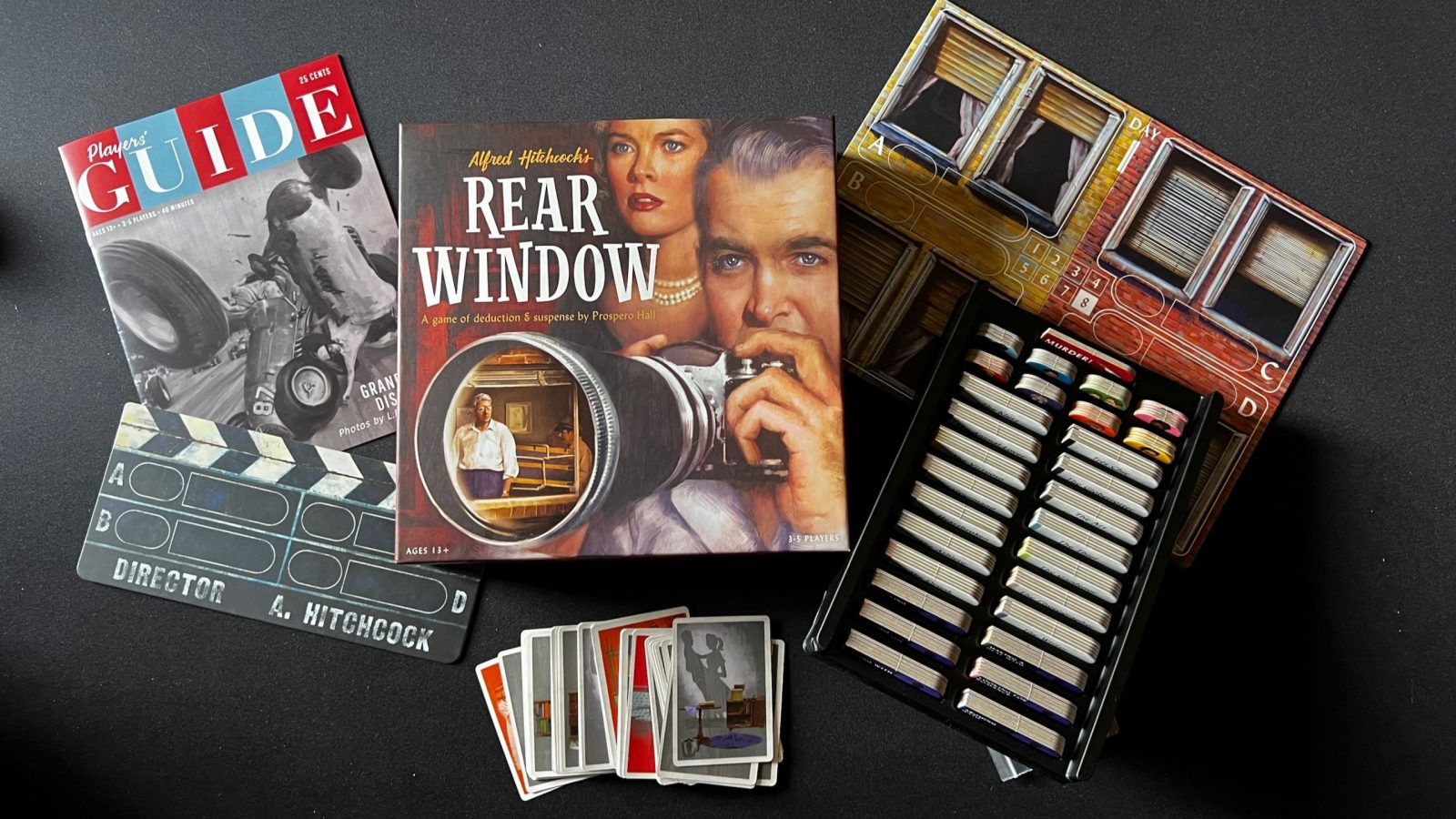 When a magazine photographer, known for his harrowing action shots, breaks his leg and is confined to a wheelchair for weeks, he spends his days near the window in the back of his apartment. Looking out onto a courtyard and the building across the way, he gets an insight into the lives of the people who live in the apartments. A budding musician, a couple who sleeps on the balcony with a small dog, a lonely woman, and a man who takes care of his invalid wife. One day, however, the invalid wife goes missing. Was she taking a trip or was there foul play? What can a man confined to a wheelchair do? In Rear Window, the 1954 Alfred Hitchcock  thriller, Jimmy Stewart faces this exact dilemma. In Rear Window, the board game, you get to step foot into the action and try to figure out what is happening. 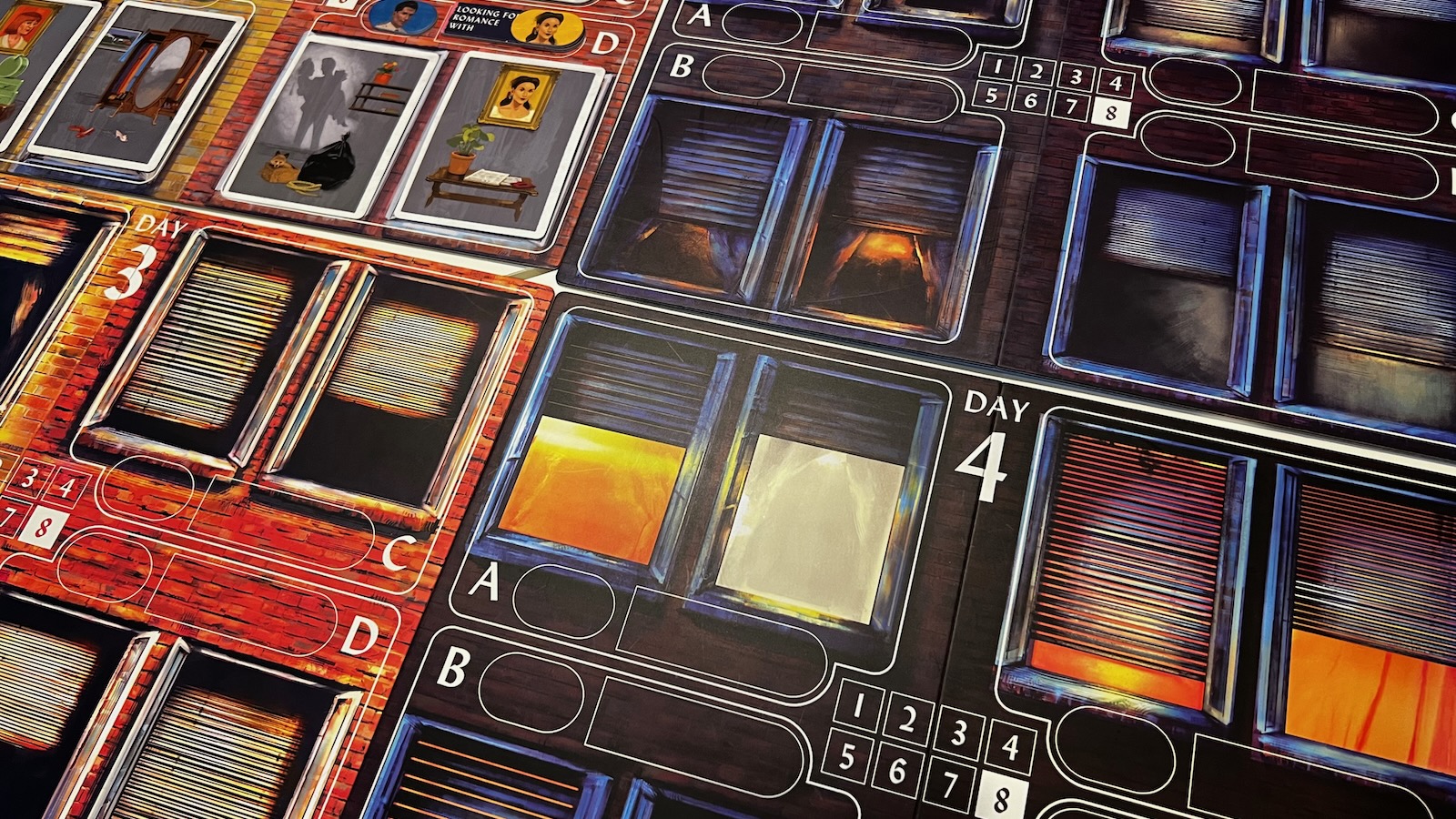 Rear Window is a cooperative, and sometimes not, release from publisher Funko Games and the design team of Prospero Hall. Prospero Hall is a collective design group out of Washington state that has taken some of the biggest independent properties (IPs) and given them the table top treatment such as Villainous, Back to the Future: Back in Time, Jaws, and The Goonies: Never Say Die. Taking on an IP such as Rear Window is a challenge unto itself. In Rear Window, players are working together to solve the puzzle set out by the director. In most cases, the director is trying to help the other players unless a special condition comes into play.

In Rear Window, one player is chosen as the director, Alfred Hitchcock himself, and the other players, known as the watchers, are in charge of figuring out the mystery. To set up, players will place four window boards on the table, labeled Days 1-4, as well as a player screen and some useful helper tiles to assist them through the game. The players will then select 12 of the speciality action tile stacks that they would like to play with in the game. Some of these tiles are basic with descriptions such as “The Gardner,” or, “The Virtuoso,” while others are more complicated that state one character might be “Making a Deal” with another. Each of the tile stacks comes with five tiles and one of the tiles from each chosen stack, along with a special murder tile, are then given to the director. The director will then shuffle the tiles and select 4, at random, to assign to the four windows on the director slate board. The director will then assign resident tokens to the action tiles with the more complicated tiles getting two residents. If the murder tile is drawn, the director has a special game they will need to play. 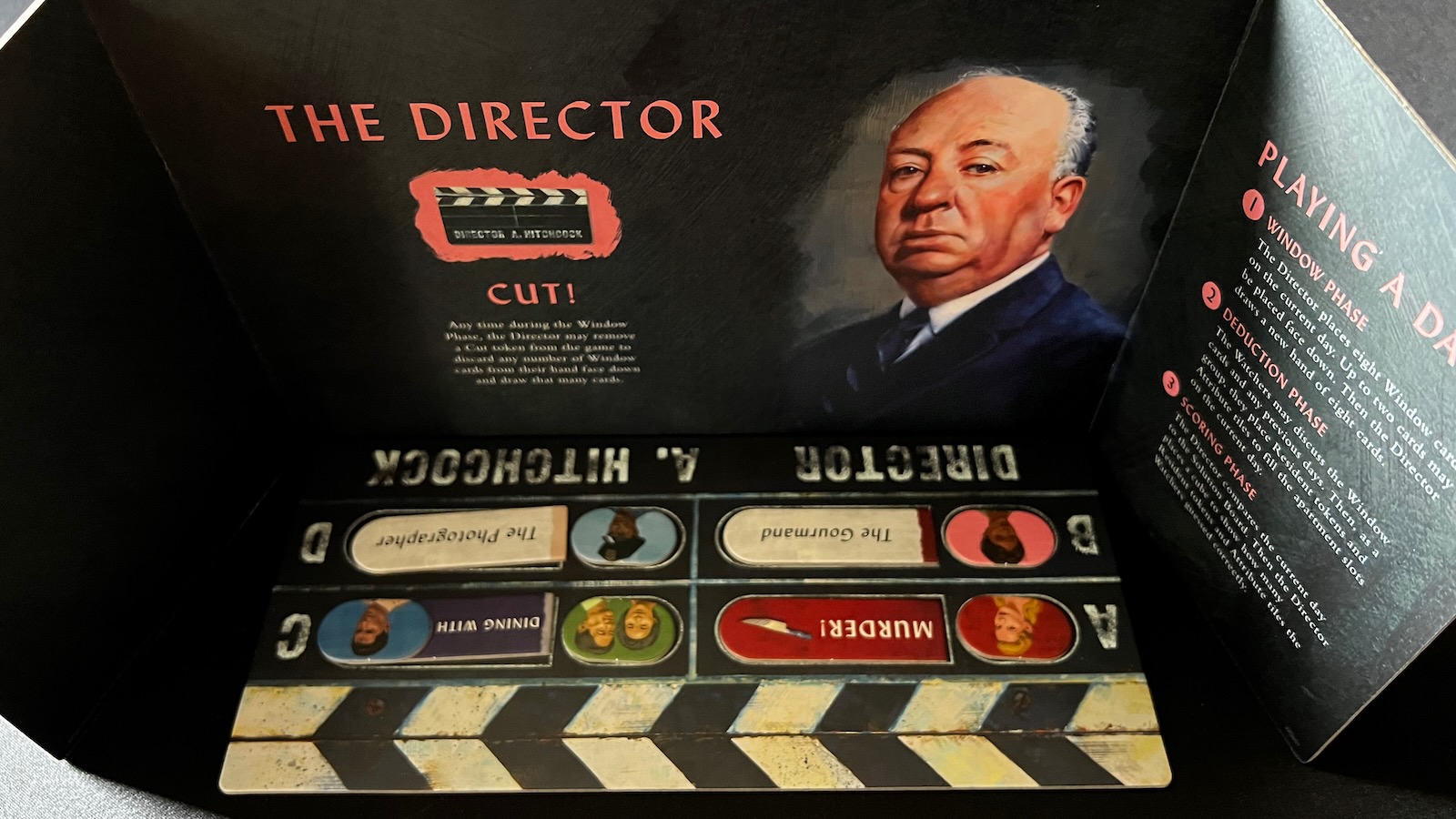 A round proceeds with the director drawing and placing eight window cards on the spaces for the current day. The director may place these cards in any location they would like, face up or face down. The director is trying to lead the players to guess the chosen resident token and action tile matching the director slate in each apartment. If the director is not satisfied with the cards they have, they may discard all or part of their hand by discarding  one of three mini slate tokens. Once the tokens are all used, the director loses this option for the rest of the game. After placing all the cards, the other players then discuss the clues presented in the current day and any previous days to try and decipher the director’s puzzle. After making their guesses, the director will place a black cube on a number 1-8 that corresponds to the number of correct tile and token placements. 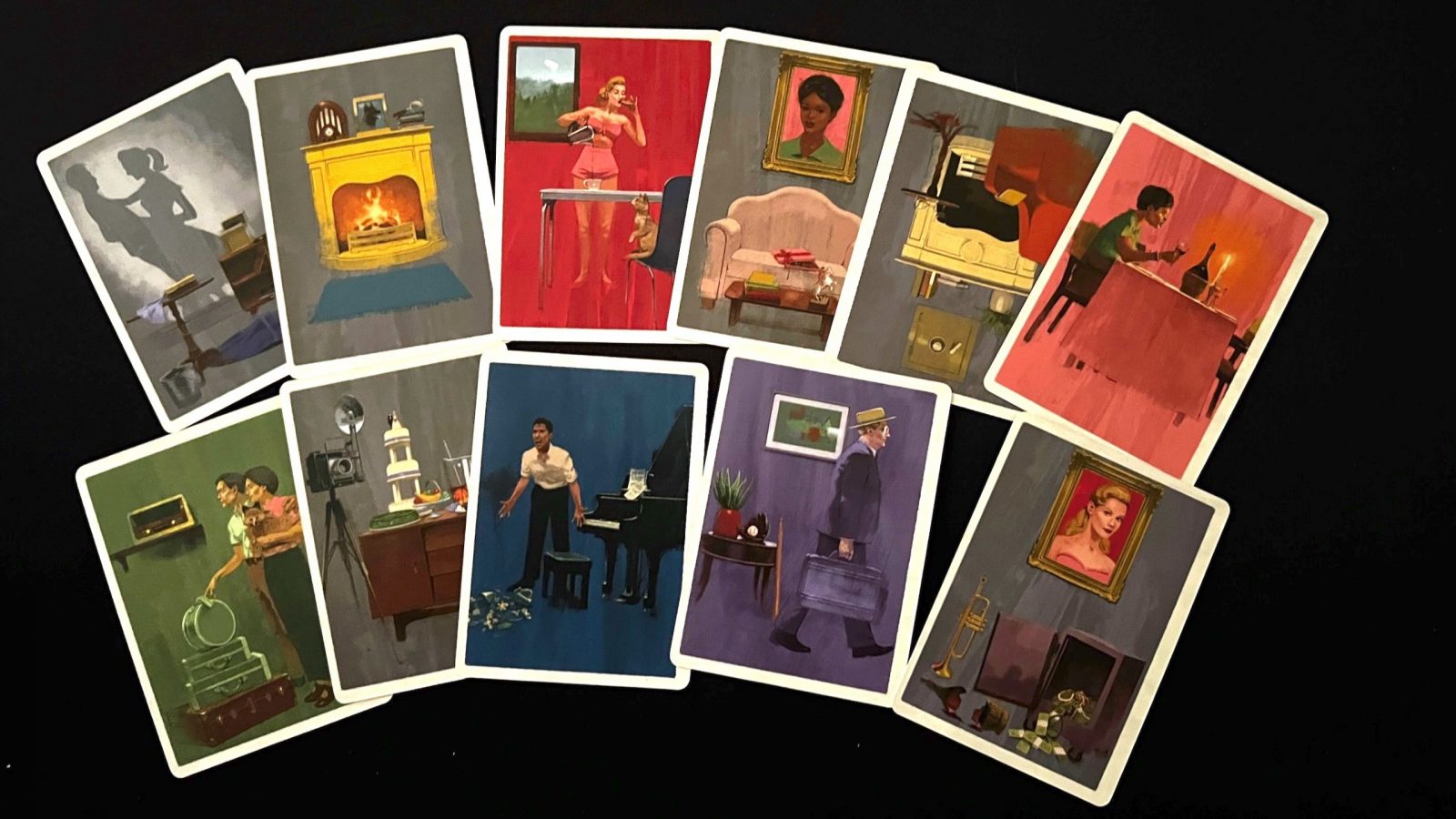 The players have a few helpers taken straight from the movie to assist them throughout the game that can each be used once. L.B. Jeffries, the protagonist of the film, allows players to discard a face down window card and have it replaced by the director with a new clue. Detective Doyle, Jeffries war buddy, allows players to ask if one action tile or resident token on any day is correct. The director must answer truthfully, even if his goal is to mislead the watchers. Lisa Fremont, Jeffries’ love interest played by Grace Kelly in the movie, allows players to select a card from any day for the director to place an arrow pointing out the most important thing in that photo. Finally, Stella McGaffery, Jeffries’ nurse, allows players to look at all the face down cards placed on a given day which comes in handy if the players believe the director is trying to deceive them… 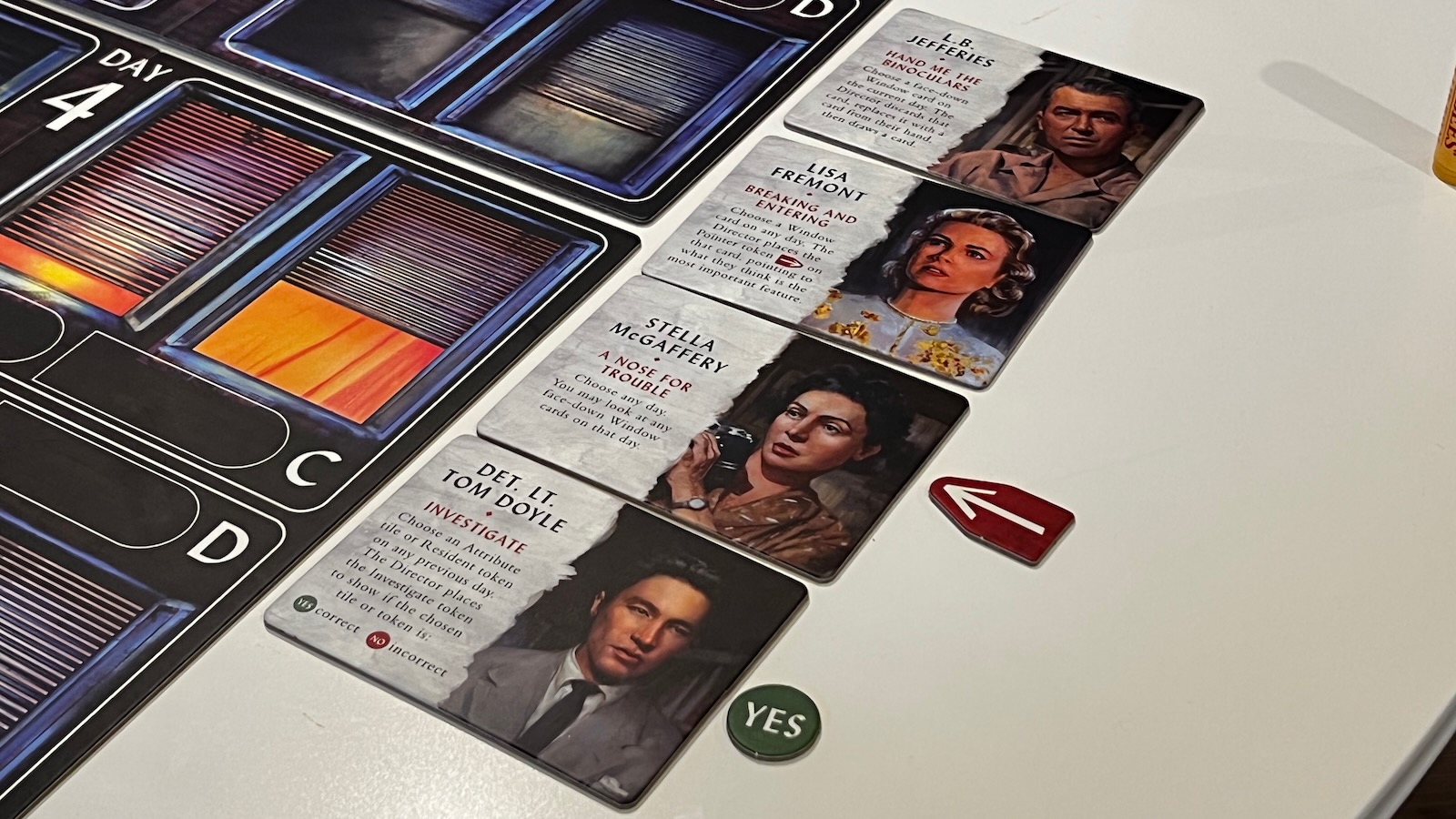 Throughout the rounds, the players communicate openly with each other about what each of the window card clues may mean. Each of the clue cards has multiple “things” in the picture, but not everything in the image may be relevant for the players. The director is only allowed to communicate through the window clues, but can actively listen to the players’ conversation to determine what clues to play during the next round. If the players suspect the director of deceit, they are given a special placard with all of the symbols they may need to point to and communicate silently. 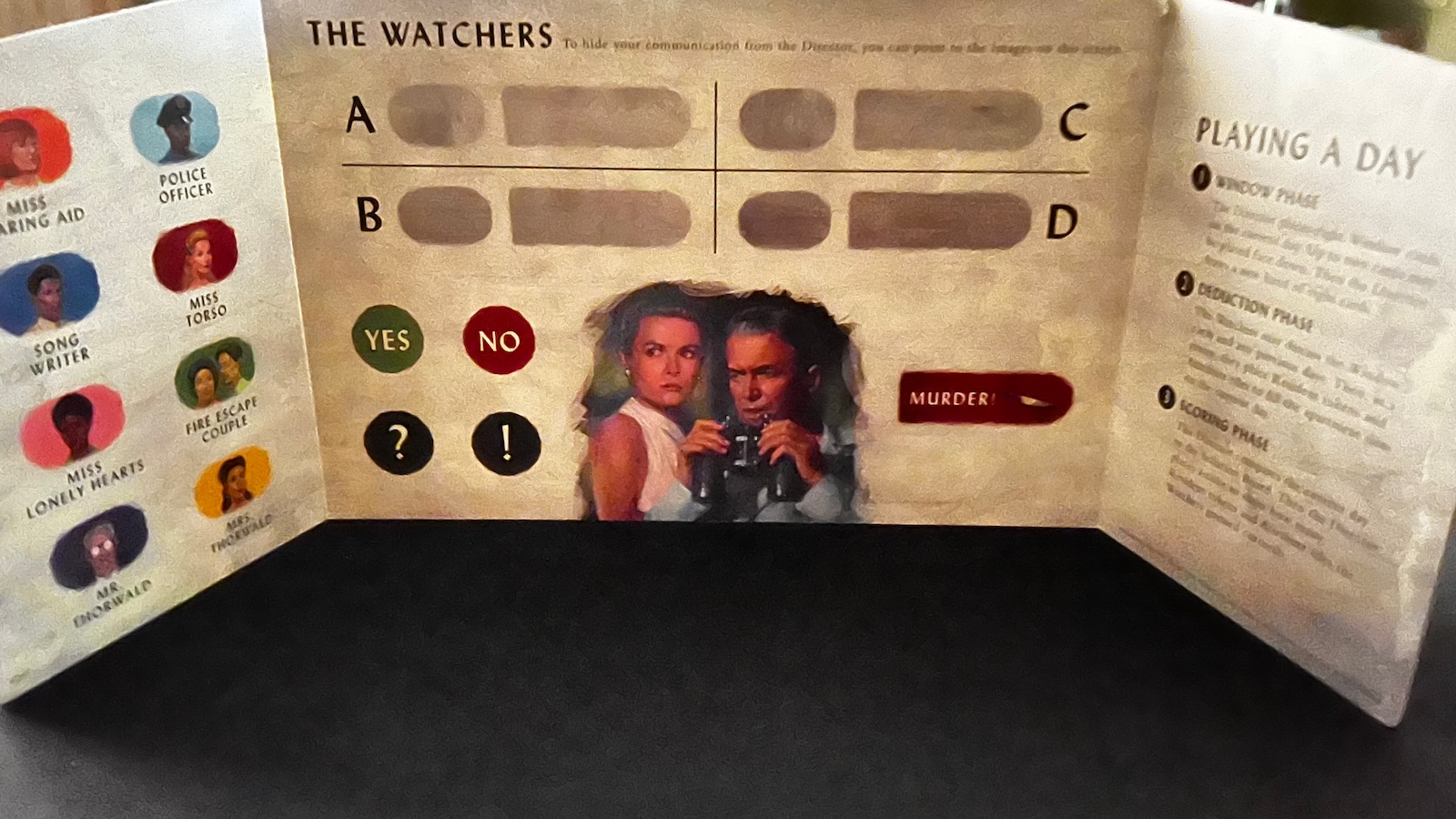 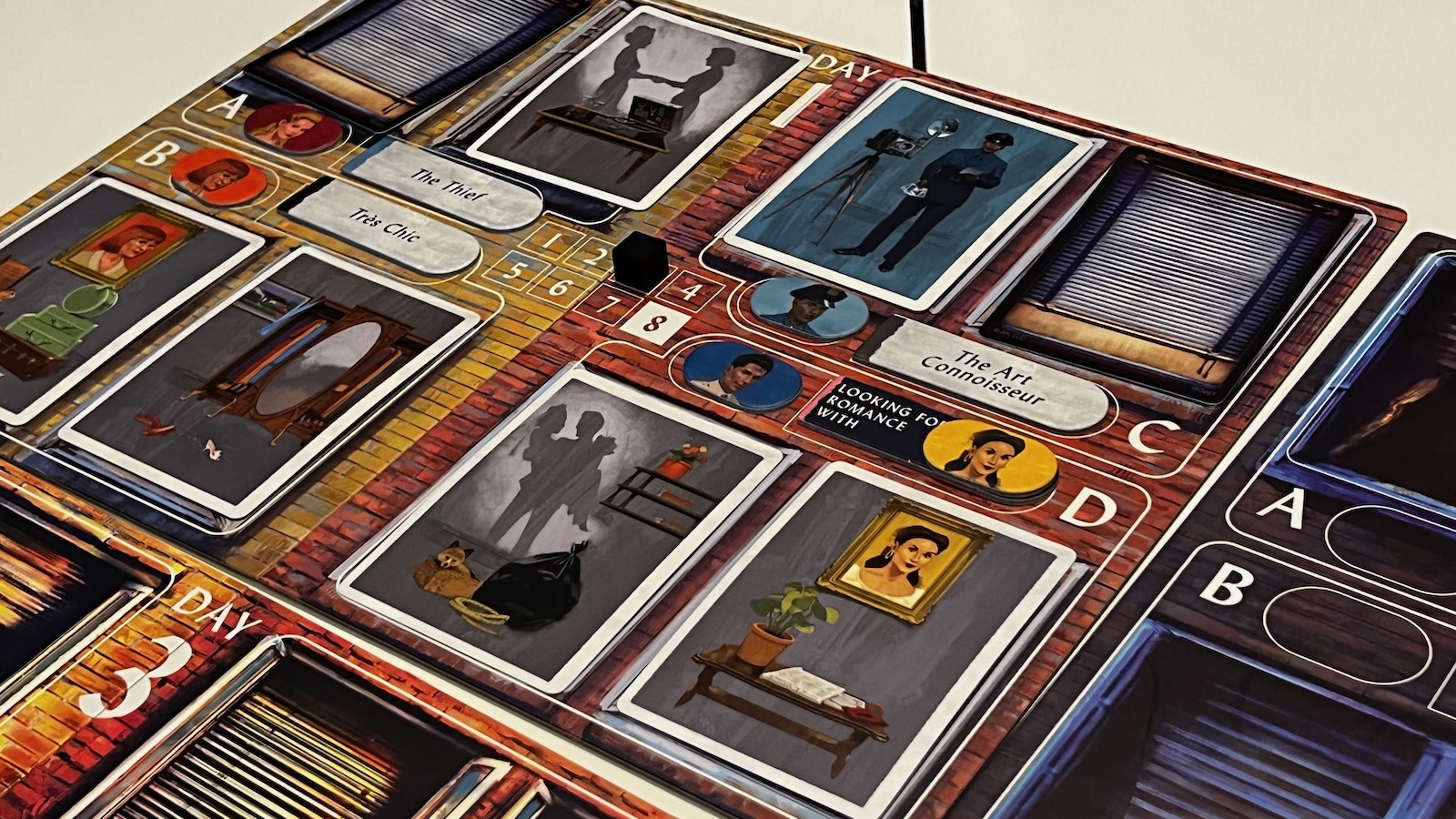 The production quality and theming of this game is spot on. The cards, the boards, and even the storage insert are all made of high quality materials. When opening the box the first time, you come across the player guide that looks like the cover of a magazine. Even the lining of the box gives players some aesthetically pleasing images. The artwork and color scheme takes you right back to the 1950’s and fits perfectly with the movie. The cinematic style of the Rear Window movie does close ups on the windows of the apartments which are incorporated into the day boards, giving small glimpses into the lives of the characters. Each of the cards is unique and draws you into a world of second guessing and wonder.

The gameplay is engaging from start to finish. Players get to choose the possible themes for each apartment and the conversations are deep and interesting. Players are dissecting every element of the cards while trying to interpret where the director is trying to lead, or mislead, them. The possibility that one of the tiles could be a Murder makes players second guess themselves quite often and the game we played ended up in an all player defeat because the director was apparently too “shifty.” Playing as the director is stressful when the cards you draw don’t help your cause. A misstep on a clue could raise the suspicion of the other players, even when a murder token is not in play. The director’s job gets all the more difficult when a murder tile is in play because they must still lead the other players to 6 correct answers, while trying to steer them away from the murderer. The game also provides a leveling mechanism with 8 tiles that require two resident tokens in order to fulfill that window. This ups the complexity for both the director and the players especially when both action and resident are needed on the tile to get the clue correct. 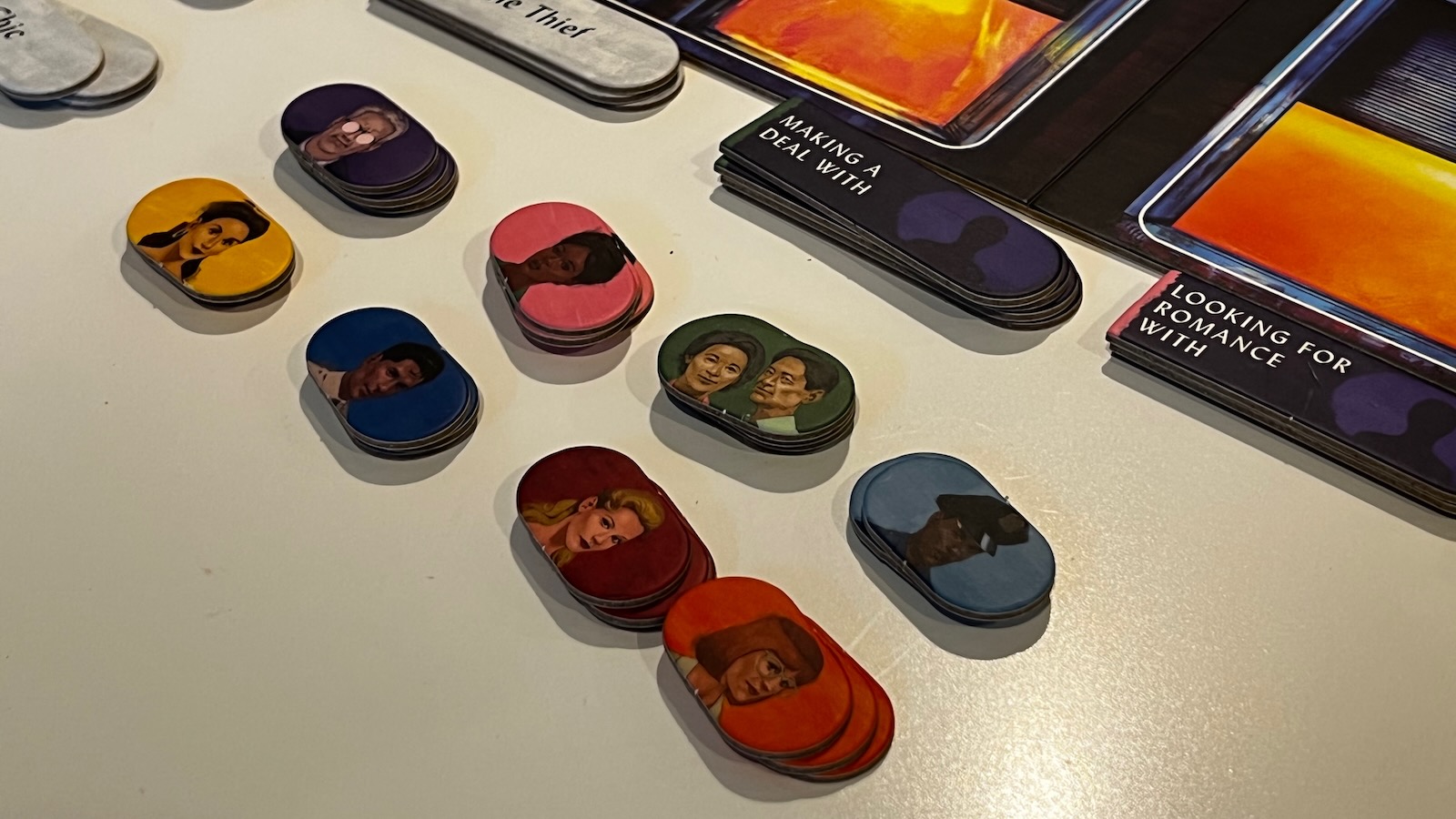 The drawbacks this game has are minimal. Some of the helper abilities do not seem to be used very often, even when players are suspicious of a murderer on the board. As you play with the same group of people, you can develop ways of giving clues that may make it too easy to narrow down the answers for the players across the table. You can easily make the game harder with some of the double tiles, but those are tricky to use unless someone has played a few rounds.

As a longtime lover of Rear Window, the film, this game is one of the best table top experiences I have had in awhile. The way the players interact with each other was dynamic and the puzzliness hit in a way that I didn’t think I needed in a board game. As one of my favorite classic movies, Rear Window was embodied in this game in a way very few IPs have managed. This will be a game I will break out as often as I can.

Rear Window is what games based on movies should be. A perfect blend of theme, deduction mechanics, brain burning puzzle, and player interaction. One of the best cooperative (sometimes) games to hit the market.