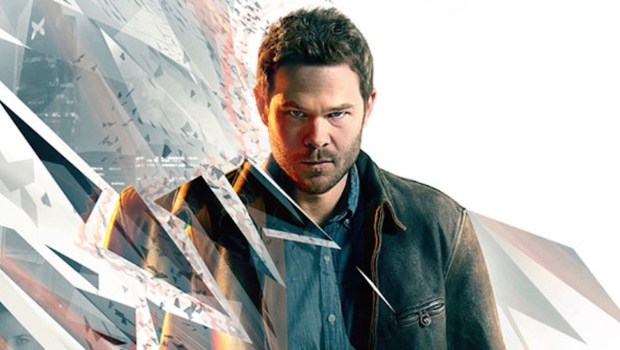 When Remedy Entertainment hits, they hit hard. Max Payne was fantastic, Alan Wake sent shivers up our spines, and now the studio has delivered their most ambitious game to date. Part game, and part TV show, Quantum Break is, by a large margin, the best Remedy game yet.

Quantum Break tells the story of Jack Joyce and Paul Serene. Serene, a prominent scientist studying time travel, invites Jack to help him with the final leg of his experiment. As is often the case, the whole thing goes sideways when Jack’s brother Will shows up. Will, who was working with Serene until just recently, divulges that this experiment will cause time to end. His attempt to put a stop to it unfortunately exposes Serene and Jack, granting both powers over time itself.

Then things get strange.

A future Paul Serene appears, older and in far better control of his power to bend time. What happens next is, excitingly, up to you.

We’ve seen games that bend time. It’s often a tacked-on game mechanic that serves to make the protagonist more powerful, or grants a little bit of flavor to a standard-fare storyline, but it isn’t often this central to the plot. But it isn’t time travel that makes Quantum Break so compelling — it’s real and impactful choice.

Throughout the story, at points called “Junctions,” the game will flip the script. You’ll stop playing as Jack Joyce and begin playing from the perspective of Paul Serene. As an example of this, during the first chapter there is a catastrophic event at Riverport University where Serene’s experiment is taking place. With Jack and Serene at odds, Serene now faces a decision — he can choose to use his company Monarch to kill all witnesses, which would obviously turn the public against them, but prevent Jack from learning anything from those witnesses, or he could mount a PR campaign to discredit Jack by coercing those same witnesses. Serene’s unique power is that he can see into the future, but he can only see to the end of a decision. Whichever option he chooses becomes reality.

It really is this gorgeous. No Bullshots here.

After you make your decision as Serene, another very unique aspect reveals itself. Each Junction is punctuated by a 20 to 25 minute live-action movie sequence. These vignettes take into account the decisions you’ve made, as well as objects you’ve interacted with during play. There are few games where even the smallest decisions matter this much; yes, the game is linear, but with this many permutations playing it twice would be largely insufficient to see everything Quantum Break has to offer.

Quantum Break’s many time-bending powers map nicely to a controller. During action sequences, Quantum Break becomes a cover-based shooter granting the player three weapons in their pack, as well as a whole host of time powers. Time Shield stops incoming fire for a time, Time Vision lets you spot explosives, enemies, and points of interest; Time Stop creates a bubble around enemies or objects in the environment where time halts; Time Dodge bends time around Jack, allowing him to zip to safety with a short residual slow-mo afterwards; and Time Rush accelerates time around Jack, allowing him to move like lightning through the environment. All of these powers combined make Jack formidable in battle, but at no point do you feel like some sort of Time Lord. Enemies are smart (only occasionally making dumb pathing decisions), and later chapters introduce more powerful variants utilizing Monarch’s technology advancements to make them nearly as powerful as Jack. There are even a few fights in the game that feel like boss battles, even if they are not called out specifically as such.

He gets time powers as well as a machinegun. So not fair.

Beyond the action sequences, there are environmental puzzles to tackle. In my preview I showed a troublesome scissor lift that was needed to reach a second story ledge. Using Jack’s Time Bubble power we prevented the lift from collapsing, allowing Jack to reach his destination. Later puzzles employ similar mechanics, adding the ability to reverse time for a collapsed object for a short time, halt a malfunctioning door, or speed through a closing gate using Time Rush. None of these sequences are overly taxing, keeping the game pace moving forward, but they do often hide something else — Chronon Source. Doing a bit of exploration allows you to find these collectables which upgrade your pool of time bending skills. Some expand the size of your Time Shield, while others let you see more with your Vision powers. Ultimately, they are more nice-to-have than need-to-have, but these power-ups and all of the story-enhancing emails and objects encourage you to deviate from the straight path.

Visually, Quantum Break is every bit as amazing as you’ve seen in videos and our recent preview. The VoCap work (simultaneous voice and motion capture) exceeds anything else we’ve seen on any platform to date, and it pushes the Xbox One to its limits. There are some minor framerate wobbles during the start of acts when the game is loading most heavily in the background, but I never saw that happen during any moment of consequence. There is a bit of mipmapping as the system attempts to render in the very high resolution textures in Quantum Break. Most of the time, everything works according to plan, but on more than a few occasions I clicked on an interactive item and the game zoomed in on a blurry mess, only to have it morph and sharpen a moment later. When a game is this immersive, these little disruptions hurt.

Aidan Gillen is fantastic, as always.

If there is a ripple in time, it’s also here in the visuals. Quantum Break runs at 1080p, but it’s the way that it’s constructed that has a potentially jarring effect. I honestly don’t care about the resolution, but to create the 1080p output, Remedy performs a temporal reconstruction from four distinct 720p 4xMSAA frames. In plain English, it bonds four fully rendered frames into one composite image with as much cleaning of jagged edges from the results as possible, and then up-samples the end result to 1080p. As a result, there is always a slight blurring effect around the edges of characters in motion. The first time I saw it I thought it was some sort of plot-driven ‘ripple in time’ effect, but this occurs before any time shenanigans take place in the story. After the first act I stopped noticing it altogether, but it may or may not be a bit off putting for some players.

The cast of actors and actresses that power the narrative of Quantum Break have better chemistry than we often see when big names are involved in a game project. Patrick Stewart was the big draw for The Elder Scrolls IV: Oblivion, but he was dead moments after the game began. Seth Green turned in a fantastic performance as Joker, but his character was all but permanently confined to the Normandy. My point being, most developers don’t use all that talent once they manage to get it. In Quantum Break, we get Aidan Gillen as Paul Serene (Petyr ‘Littlefinger’ Baelish in Game of Thrones), Shawn Ashmore as Jack Joyce (Iceman in X-Men), Lance Reddick as Martin Hatch (Phillip Broyles in Fringe), Dominic Monaghan as Will Joyce (Meriadoc Brandybuck in Lord of the Rings), and Courtney Hope as Beth Wilder (Anna in Allegiant), just to name a few. The list of amazing talent on display here, both in the full-motion-video sections, as well as in-game, is staggering. Every one of them delivers a top-shelf and believable performance. Remedy’s casting director, Steve Brooksbank, couldn’t have done better, and Timothy Burton and Kevin McGill’s cinematography work (with Stobe Harju’s direction) sews it all together perfectly.

Shawn Lance turns in a solid performance as the game’s protagonist.

By now you may have noticed that I’m being very cagey about the story, and that’s on purpose. The game’s junction points make it impossible to say how you’ll experience the game, though it’s likely going to be a different combination than the path I chose. At the end of every act you’ll see how your friends chose, as well as the community at large. Thankfully, these moments feel like they fit together, regardless of your choice — it’s very clear that Sam Lake (the writer behind all of Remedy’s work) and his team wanted to make every beat of the story compelling, no matter how you chose to experience it.

Remedy swung for the fences and hit a homerun with Quantum Break. With an engrossing story, an amazing cast, and the most beautiful visuals on the Xbox One we’ve ever seen, Quantum Break is a masterpiece.

Ron Burke is the Editor in Chief for Gaming Trend. Currently living in Fort Worth, Texas, Ron is an old-school gamer who enjoys CRPGs, action/adventure, platformers, music games, and has recently gotten into tabletop gaming. Ron is also a fourth degree black belt, with a Master's rank in Matsumura Seito Shōrin-ryū, Moo Duk Kwan Tang Soo Do, Universal Tang Soo Do Alliance, and International Tang Soo Do Federation. He also holds ranks in several other styles in his search to be a well-rounded fighter. Ron has been married to Gaming Trend Editor, Laura Burke, for 21 years. They have three dogs - Pazuzu (Irish Terrier), Atë, and Calliope (both Australian Kelpie/Pit Bull mixes).
Related Articles: Quantum Break
Share
Tweet
Share
Submit