Editor’s Note: In my initial review, there was a strange problem with screen zoom not functioning. By deleting and redownloading the game this was fixed, so this review has been updated to reflect this. Metacritic’s policy is to never update reviews under any circumstances. This disproportionately hurts developers, especially the smaller ones. We offer our most sincere apologies for the situation, and have changed the score to reflect the accuracy of the situation.

It feels like just a few weeks ago I reviewed SNK vs. Capcom: Match of the Millenium on Switch. While that was just one game for the NeoGeo Pocket Color, NeoGeo Pocket Color Selections Vol. 1 compiles several, including two I’ve already reviewed, into one neat package with a few more goodies on top. It feels a bit redundant to have some of these games available as standalone purchases and part of this collection, but there’s… slightly more to see here.

This collection has 10 games within: BIG TOURNAMENT GOLF, DARK ARMS: Beast Buster 1999, FATAL FURY FIRST CONTACT, SNK GALS’ FIGHTERS, KING OF FIGHTERS R-2, THE LAST BLADE: Beyond the Destiny, METAL SLUG 1ST MISSION, METAL SLUG 2ND MISSION, SAMURAI SHODOWN! 2, and SNK VS. CAPCOM: THE MATCH OF THE MILLENNIUM. Most of these are fighting games and play very similarly, so you can read my previous reviews to get the gist of those. Instead, let’s briefly talk about the non-fighting games. 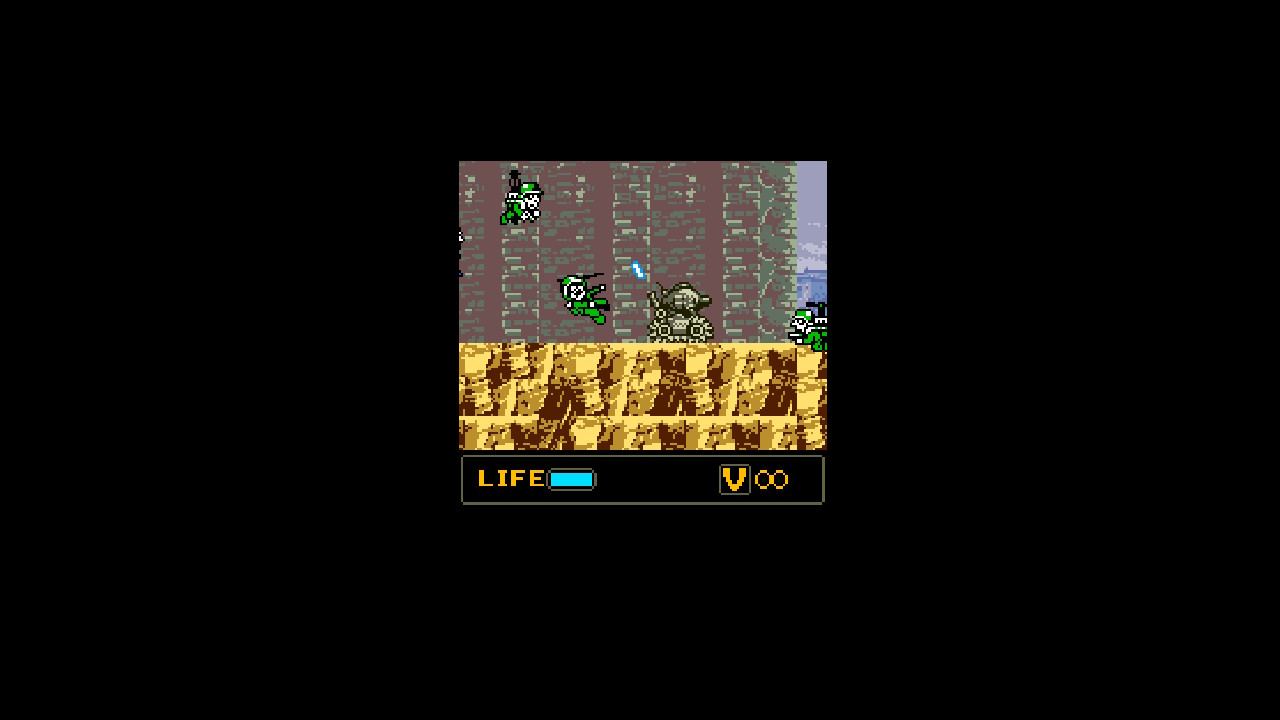 The biggest draw for me was the two Metal Slug games included, I’m a big fan of the series, even if they’re frustratingly hard. 1st and 2nd mission miniaturize the run-and-gun action of the arcade games with surprisingly minimal compromises. While there is only one playable character (two in the sequel) and ducking doesn’t adjust your aim much, this still feels like a fairly solid entry in the series — if a bit more segmented than the rest. You can still pilot the titular tank, but only in certain sections much like the plane stages which are also present. These games, at least the run and gun parts, are also much, much easier since the system could only handle so many enemies on screen at once. Don’t get me wrong, they’re still difficult, but slightly more manageable here. I should also mention that slowdown from the original 2nd mission is still present here, which occurs when the announcer speaks, though you can disable this feature. I certainly prefer the main series games for their bombast and overwhelming zaniness, but these are still decent games in their own right.

Next up is Big Tournament Golf, which is exactly what it sounds like. It’s an old-school, arcade-style golf game similar to the Mario Golf series. Oddly enough, I actually had the most fun with this title out of the bunch, not for any particular reason having to do with the game, I just like this style of golf games a lot. You have three choices of courses each with 9 holes and can play as several characters with different stats. The art style is very appealing as well; characters have big, anime portraits and poses whenever you get the ball in the hole. It’s simple, yet effective fun. 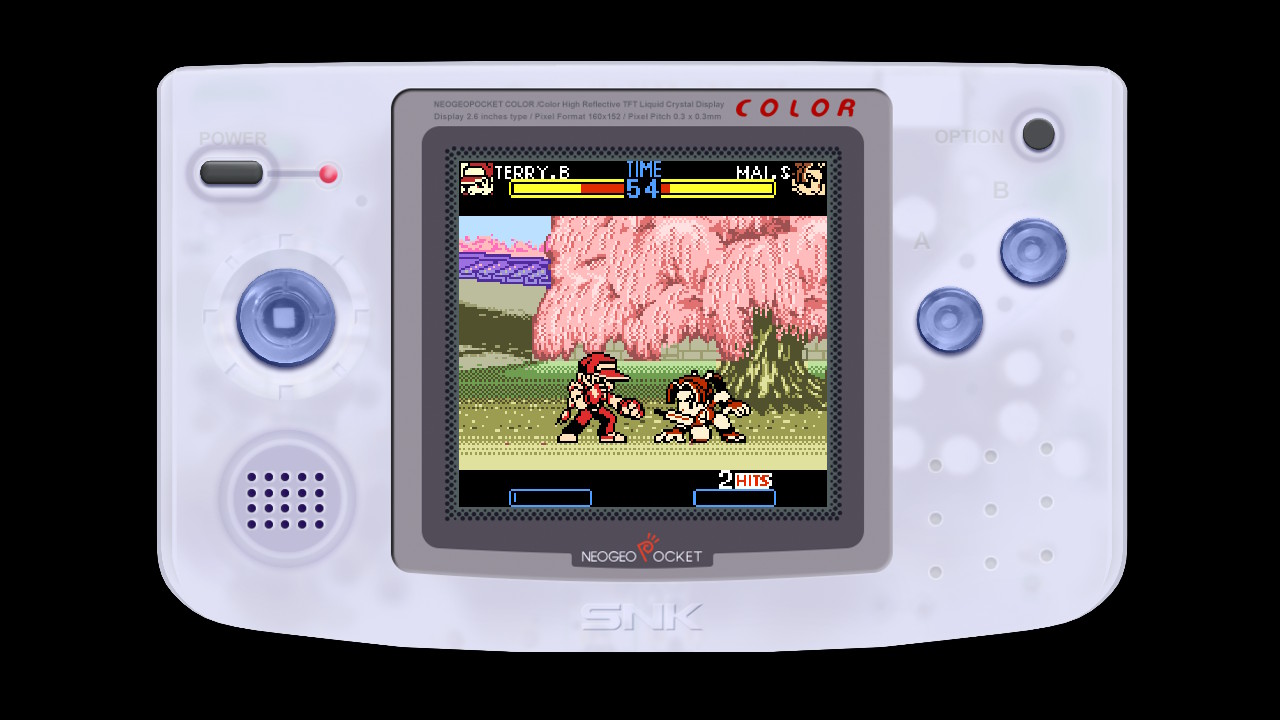 The last non-fighting game (I know SNK is known for fighting games, but there’s a lot) in the package is Dark Arms, a mashup of shooter and RPG mechanics. You play as a Beast Buster transported to another world to fight evil using various guns you can craft by combining materials together. Your main weapon has the important effect of capturing enemies defeated using it, and you can then use them to improve weapons you already have. It’s a neat idea, even if there isn’t a whole lot to the game outside of fighting enemies and exploring.

When you’re selecting a game, you have quite a few options and extras to choose from. You can play the English or Japanese releases of each title, change the type of NeoGeo pocket you want to play on (all the way from black and white to the New Color), and even look at a 3D recreation of the games’ boxes. Inside these games, you can also view their manuals, change the skin of your virtual Pocket, and rewind the game you’re playing. The box art was the only thing I felt was really missing from the standalone releases, and it’s really cool to look at them here. You can even swap between the Japanese and English versions as well as open up the cases and take a look at the cartridges themselves. Other companies re-releasing titles should take note: this is how you properly preserve your classics. 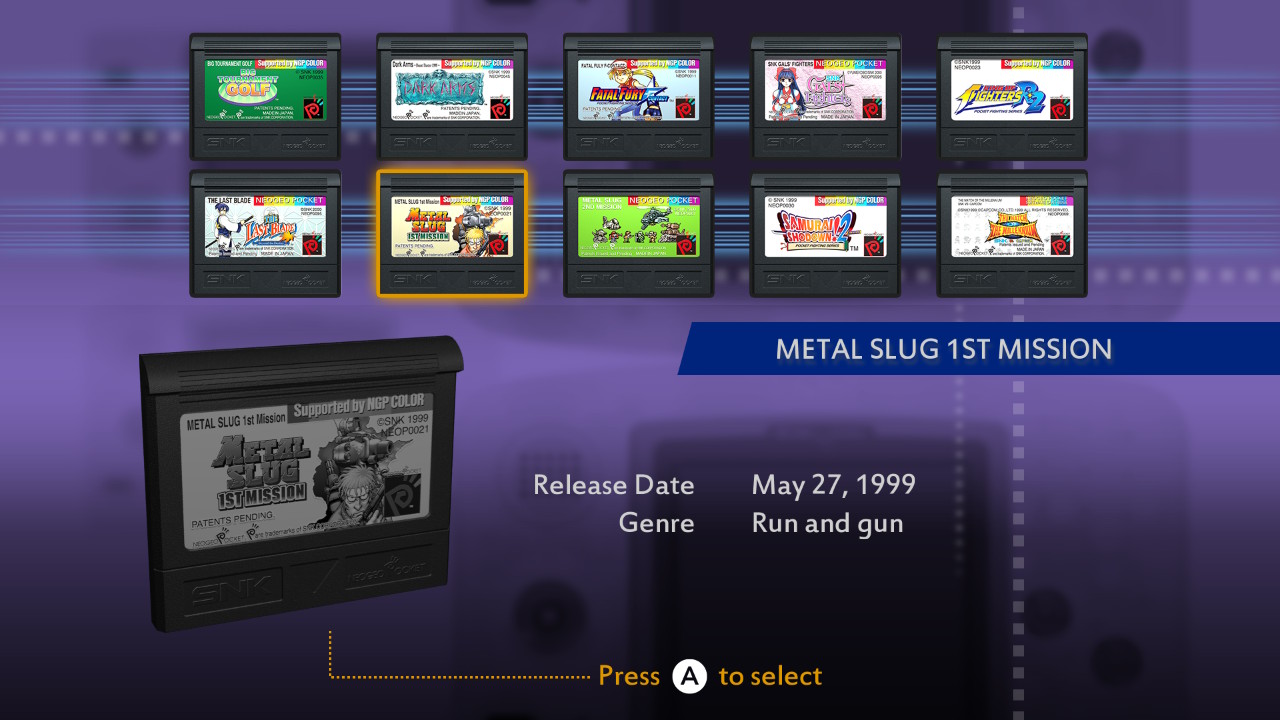 Unless you’re me and a weird glitch magnet, you can zoom in the screen to however big you want. You can play with the tiny, tiny default size (as seen in screenshots, sorry) or fill a 4:3 space. While I prefer to play with black borders, you can fill in that blank space with an image of whatever type of NeoGeo Pocket you’re playing on.

While the games themselves haven’t aged terribly well and there are too many fighting games here, NeoGeo Pocket Color Selections Vol. 1 demonstrates the best way to preserve old games. On top of simply playing the games themselves, you can take a look at everything that came with the cartridges way back when on top of taking advantage of convenience features like rewind.

David is the kind of person to wear his heart on his sleeve. He can find positives in anything, like this is a person who loved Star Fox Zero to death. You’ll see him playing all kinds of games: AAAs, Indies, game jam games, games of all genres, and writing about them! Here. On this website. When not writing or playing games, you can find David making music, games, or enjoying a good book. David’s favorite games include NieR: Automata, Mother 3, and Gravity Rush.
Related Articles: NeoGeo Pocket Color Selections Vol. 1
Share
Tweet
Share
Submit