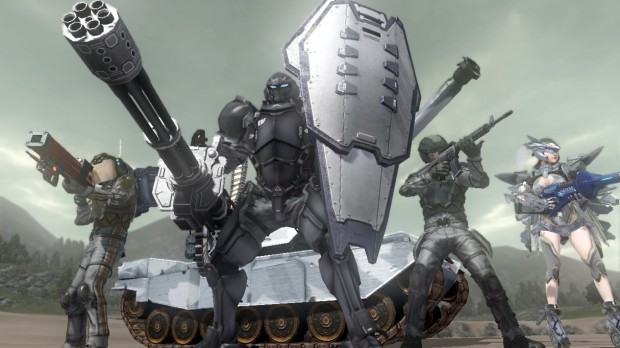 For those who are new to the Earth Defense Force series, the first thing you should know is that they’re all terrible games—I mean really, really bad. The premise is that Earth is attacked by giant bugs and giant robots simultaneously in an effort to extinguish human life for no reason. The Earth Defense Force stands as the last line of defense against the invasion. The series is known for its crazy weapons, terrible voice acting, incomprehensible story, and frustrating game design. And in this regard, Earth Defense Force 2025 is no exception.

So why would anyone play these games? Because they’re hilariously fun! All of the elements that would typically create a bad game come together to create something beautiful in the Earth Defense Force series, and my time so far with their newest iteration has convinced me that it may be their magnum opus.

Earth Defense Force 2025 features the return of the previously defeated ravagers and their giant insect minions, after being defeated in Earth Defense Force 2017. As the game will repeatedly remind you during the course of the first dozen levels, the giant insects and the ravagers have returned after a seven-year hiatus and have begun exacting their revenge upon humanity and the pesky soldiers of the Earth Defense Force. The story beyond that doesn’t really matter, so I’ll summarize by saying that it involves killing a lot of big things using guns.

Playing Earth Defense Force 2025 is a lot like participating in a jousting tournament in that it’s a lot of fun once you accept that taking part is probably going to be really painful. The controls are unnatural, the weapons are unpredictable, the graphics are bad, and the framerate dips and other technical hiccups make playing it hard, but this can all be overcome once you just agree to overlook it and have fun.

Earth Defense Force 2025 has a larger variety of enemies than any of its predecessors with black ants, red ants, spiders, larger spiders called Retiarius, flying robots, bipedal robots, quadruped robots, Godzilla beasts, flying dragons, and many more. The AI isn’t as terrible as it could be either, because the enemies attack you head on, scutter behind you for a surprise attack, and fly overhead to carpet bomb you, and the game quickly becomes very challenging, especially on high difficulties.

Probably the biggest change in Earth Defense Force 2025 is the four classes, and although one of the more recent EDF titles tried out classes, it’s done a lot better in 2025. The Ranger class is the typical soldier, and the easiest to play. They run, dive, and have the largest and most varied library of weapons. The Wing Diver can fly and quickly navigate through levels, but their weapons draw from the same energy pool as their jetpack, so you can’t fire as freely as you can with the other classes. The Air Raider is a support class that isn’t too useful alone, but during online cooperative play is invaluable with their air strikes, vehicles, and weapons that assist other players. Finally, the Fencer is a heavy tank class that moves very slowly, but can attack using powerful ranged and melee weapons.

All four classes are useful and fun to play, but depending on the level, some of these classes feel out of place. Some levels are huge and obviously designed with the wing diver in mind, which can be a huge pain if you picked the fencer. Other levels will take place underground, completely disabling the air raider who relies on air strikes and vehicles, neither of which can be summoned. For most levels though, it doesn’t really matter and you’ll have fun no matter which class you choose.

There are fewer weapons in Earth Defense Force 2025 than some of the previous titles, but each one is more functionally unique, and the variety of weapons offered by each class make playing those classes an even more diverse experience. From the Air Tortoise to the Torch, there is a weapon to suit everyone’s play style and the vast variety of combat circumstances encourages players to experiment with new weapons each level.

Earth Defense Force 2025 offers hours upon hours of gameplay with insurmountably difficult settings available for returning players, and more than 100 levels including the free mission pack and a second paid one (with more being released in the future). The game modes include offline and online versions, with 2-player splitscreen while offline, and 4-player online co-op (which you can do with two people per television). There is also a Versus Mode that lets you battle other players, although the game wasn’t designed for this and it’s mostly a gimmick that you can try out when you get bored.

It’s hard to judge a game like Earth Defense Force 2025, but despite its flaws, when you it comes down to it  this is pure, unadulterated fun. The over the top gameplay, hilarious weapons, classes, and enemies all make this game amazing, and somehow the terrible things like the idiotic story, occasionally terrible game design, and technical hiccups make it even better.

The hours of laughter and frustration are well worth the money you’ll pay, and I challenge anyone who picks this up to not enjoy themselves in the worst kind of way.