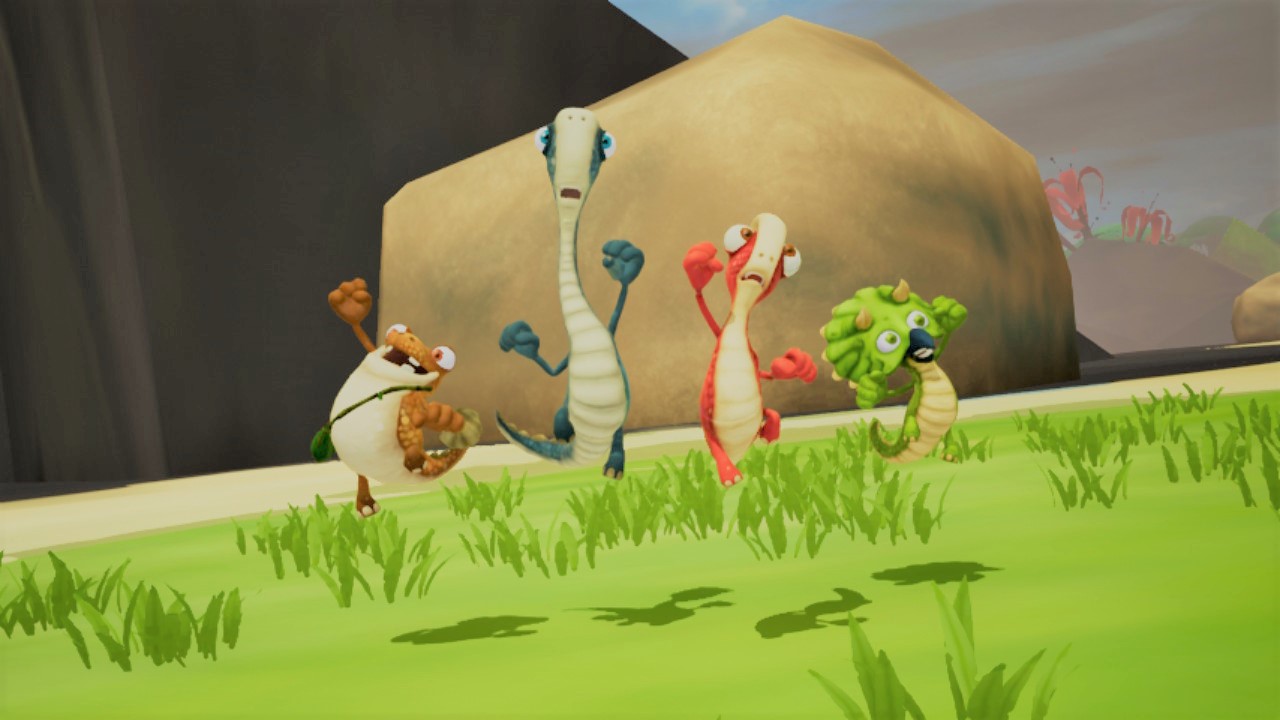 Kids games, especially licensed kids games, get a bad rap. They’re often assumed to be low budget, poorly made, and rushed through development in less than a year to coincide with a movie’s release. There are some standouts, such as the recent Spiderman title by Insomniac, but for the most part, licensed games are terrible. Gigantosaurus The Game, based on the children’s television series of the same name (minus “The Game” part, of course) is a game I expected to be just as terrible as its contemporaries, but I was pleasantly surprised to see that it’s actually a fairly serviceable, if bland, 3D platformer.

In Gigantosaurus, you play as four dino-kids collecting eggs as they follow a T-Rex around. As you can assume, light-hearted hijinks ensue which are presumably similar to the show. While there are multiple objectives in each level, you only have to collect four eggs to be able to move on to the next level. In each area you begin at a sort of home base where you’ll bring the eggs you collect and, aside from the first and last objectives, you’re given free rein to explore wherever you want. This style of design is very similar to Super Mario Odyssey, but it lacks in one key aspect — these levels are barren. While there are a lot of things to collect, they are spaced very far apart so most of what you’ll be doing is walking from one cluster to another across a vast, empty landscape. There is the occasional enemy or collectable purple seed (the equivalent of Mario’s coins), but since enemies are easy to avoid or can be plowed right through by the end of my playthrough I had more than enough seeds to spend on all the other collectables or objectives in the game. 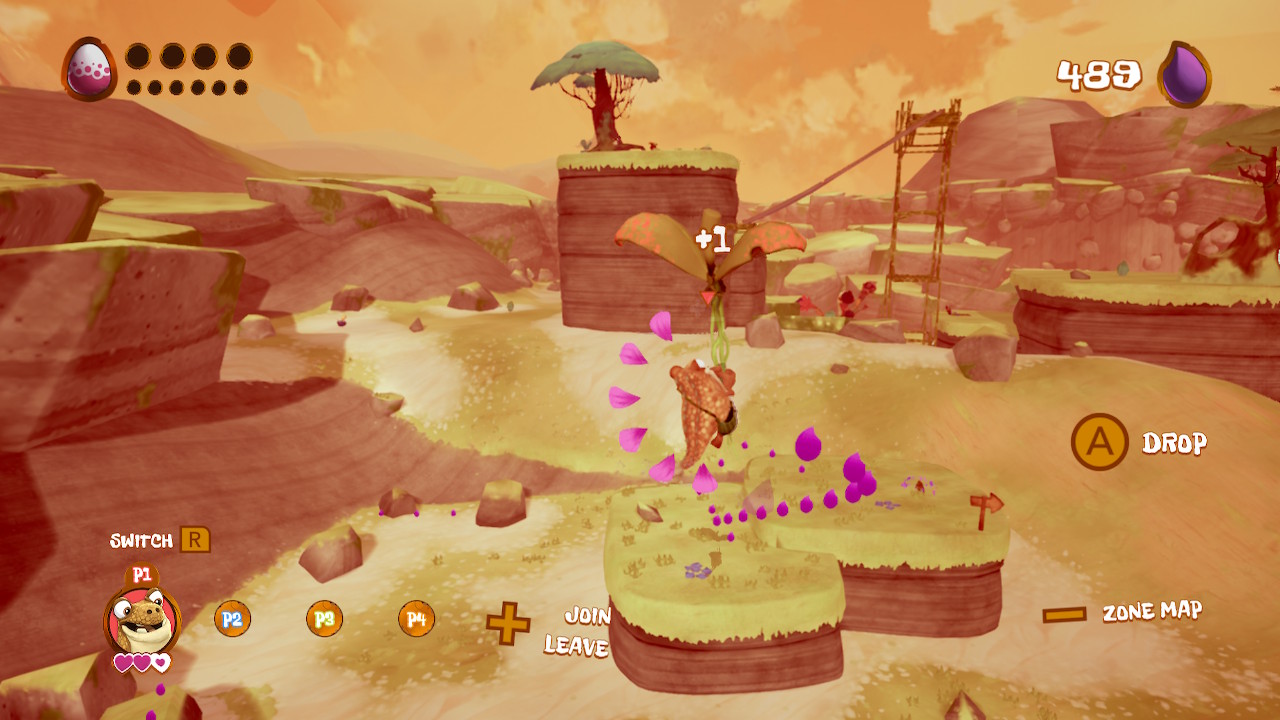 The platforming you will be doing once you reach where you’re going is fairly rudimentary. Jumps are easy to make throughout the game and even if you do miss your mark the punishment is lenient, maybe one or two bits to redo or a little bit of fall damage. Your moveset is likewise very simple with a basic jump and tail attack. Each of the four characters do have a context-sensitive action as well but otherwise play exactly the same. Up to four players can take control of one of the dinos at once, but I wouldn’t recommend this since the camera in multiplayer makes the game almost unplayable, so you’ll likely want to stick to singleplayer even if switching between characters takes a bit too long.

Between each level, you’ll race against each other in go-karts. You may be sensing a pattern here, but these are very simplistic races. There are a few shortcuts, dinosaur skulls to collect, and peppers which grant a burst of speed, and that’s basically it. The races aren’t all that interesting, but they do their job of breaking up the platforming and offering some variety. 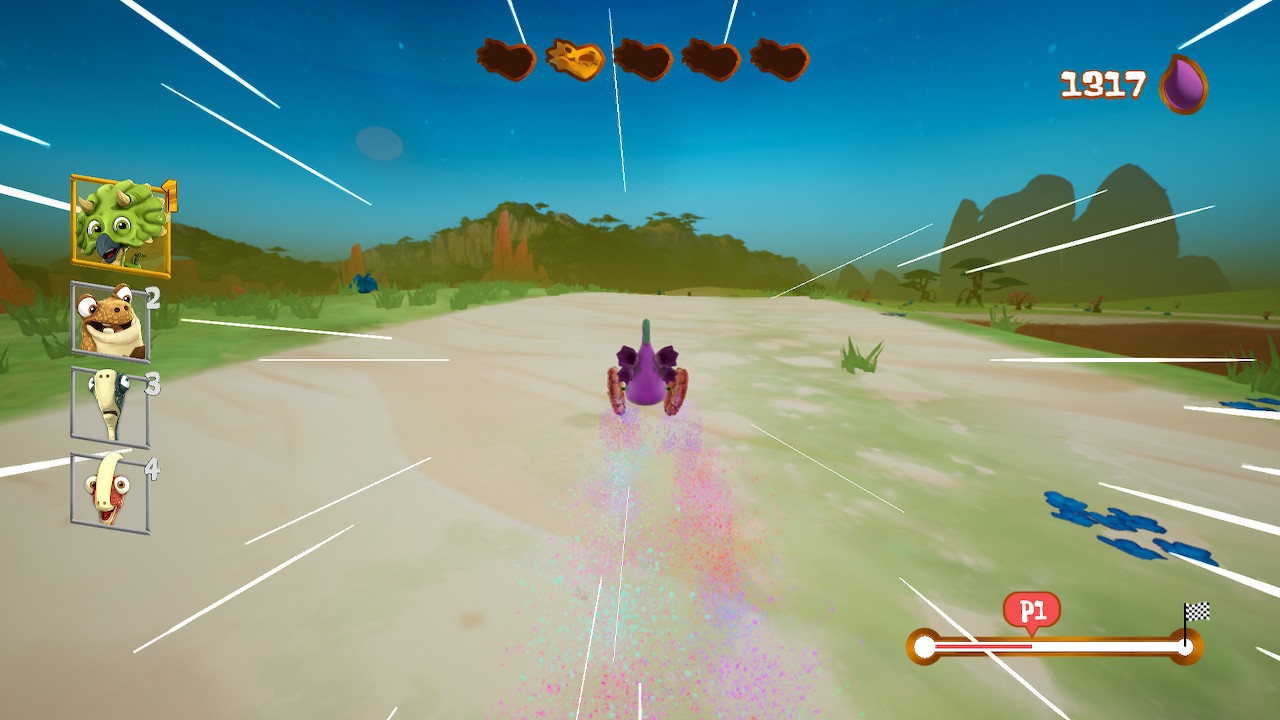 Unfortunately, since the game was probably rushed there are quite a few glitches throughout the experience. In races, some ramps will suddenly change your direction and in the open world trees will fade away as you get closer to them. I also encountered a few crashes, once when using a character’s ability and again when loading into the final level. It’s nothing that will ruin the already average experience, but it’s worth noting especially since the latter crash skipped the last level’s intro cutscene which children will probably want to see if they’re fans of the show.

Gigantosaurus The Game, while above average for a licensed game, is a thoroughly average platformer. While it is glitchy in some places, it will probably keep kids young enough to enjoy the show entertained for a good while and could serve as a gateway into the genre.

David is the kind of person to wear his heart on his sleeve. He can find positives in anything, like this is a person who loved Star Fox Zero to death. You’ll see him playing all kinds of games: AAAs, Indies, game jam games, games of all genres, and writing about them! Here. On this website. When not writing or playing games, you can find David making music, games, or enjoying a good book. David’s favorite games include NieR: Automata, Mother 3, and Gravity Rush.
Related Articles: Gigantosaurus The Game
Share
Tweet
Share
Submit