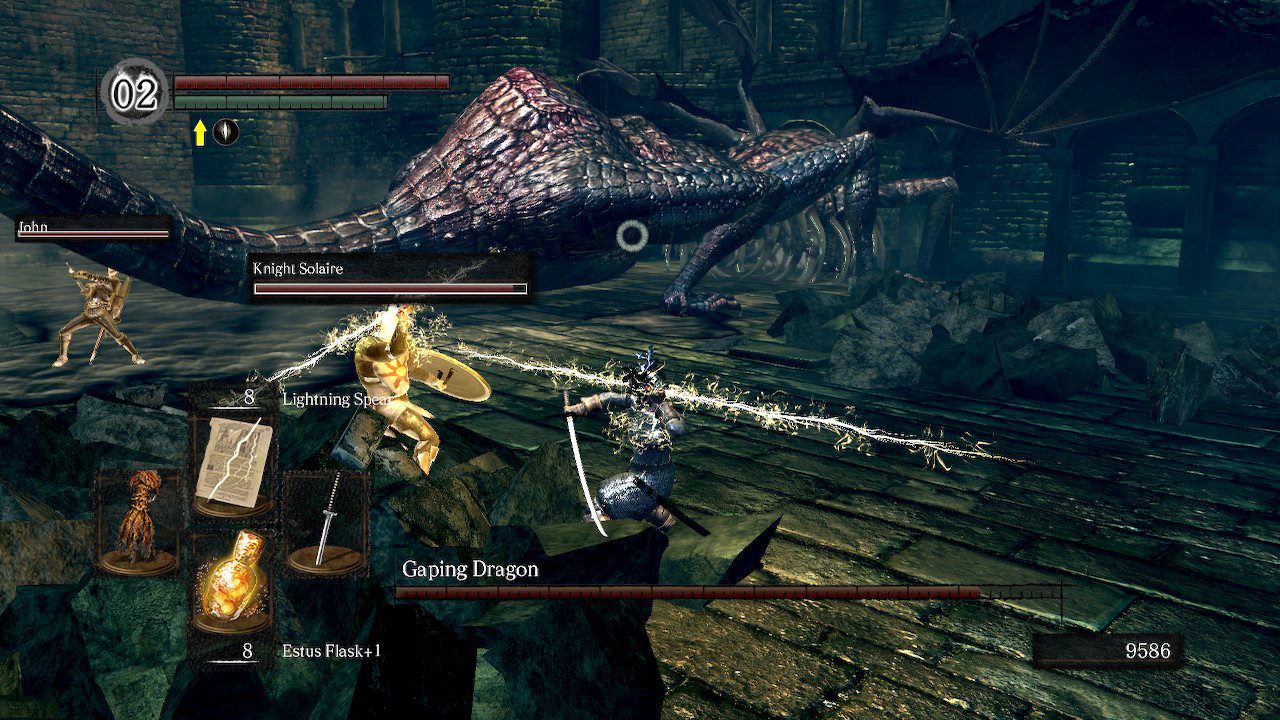 When we reviewed Dark Souls: Remastered for the Nintendo Switch, we found that it still had all the charm of the original game nearly a decade later. While its winding, interconnected world and Herculean challenge still held their power, there was one notable change: Lordran felt lonely. We couldn’t access the game’s servers while playing it for review, but its release enabled multiplayer and in the last few weeks, Lordran has once again filled with vibrantly hued phantoms.

The Souls series has always had a unique approach to multiplayer, one that seemed even more impressive before games like Journey began experimenting with its possibilities. Players can communicate with each other from their own separate games by leaving glowing orange messages on the ground that are shared with others, or interact more directly through a sometimes beguiling system of summonings and invasions. Adventurers can either leave their mark on the ground to be called into other players’ games as a helping hand, or force their way in to serve as a particularly formidable enemy. Dark Souls: Remastered is now full of players of both types, along with their (sometimes) helpful messages.

Multiplayer occupies a strange space in Dark Souls. Some players will never interact with it, while for others it becomes a game unto itself. Whether you actively engage in it or not, the presence of transdimensional tips and taunts changes the character of the game, as does the ever-present threat of invasion. Some areas will even summon hostile players automatically to prevent you from trespassing through them.

Connecting with other players works about as well in Dark Souls: Remastered as it has in the rest of the series, for better or worse. Dark Souls has never been famed for its stable online component, and connections are just as quirky here as they’ve ever been. Over the past few weeks, I’ve had plenty of unsuccessful summons, the game struggling to connect to another player for up to a minute before delivering a message that the attempt has failed. Perhaps more concerning, there’s often noticeable lag once you do connect. When you’re engaging in jolly cooperation, this usually means that a few moments can elapse between striking an enemy and damage registering. It’s much worse when you’re dealing with hostile players, where a jumpy connection can quickly spell your doom. I’ve had countless encounters in which other players seemed to teleport behind me to land an all-important backstab.

The arrival of multiplayer also sours one of the Switch’s biggest advantages. Putting the console into sleep mode will sever its internet connection, which in turn boots you back to the main menu. All you need to do to avoid that is remember to start the game in offline mode if you plan on traveling with it, but it does make the experience a bit less seamless.

It’s impossible to say just how populous the servers are, but it seems to be on par with the original Dark Souls. Thanks to the game’s somewhat arcane method of matching players up based on character and item levels, it can also be difficult to summon help if you’re tackling areas in a strange order, or at all once you get too powerful. Still, most of the time when I wanted to other summon or invade someone, I was able to, even if it took some waiting around. For the last few years, the Dark Souls community has been holding “Return to Lordran” events, encouraging everyone to log back in during the same few days. We’ll be interested to see if such a celebration can invigorate the game on the Switch as it has on other platforms.

A committed indoor kid, Bryan moved from Pittsburgh to Los Angeles for a prettier landscape to ignore. They can be lured outside with promises of taco trucks and film festivals, and enjoy trawling through used book stores for works on the occult. Bryan has been gaming since the SNES era and is a sucker for good pixel art.
Related Articles: Dark Souls: Remastered
Share
Tweet
Share
Submit