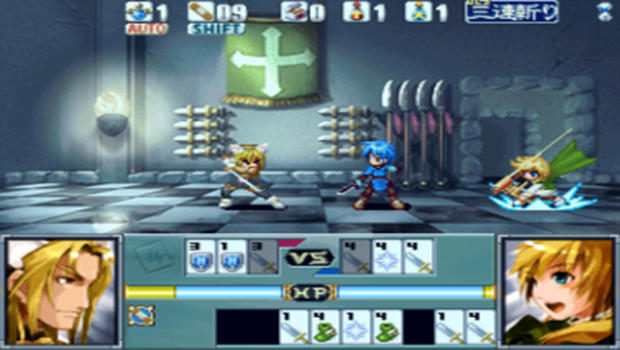 The advent of indie gaming in the last few years has allowed for a great variety of games to come out. Genres and gameplay styles that would normally be overlooked by AAA studios can see the light of day through Kickstarter or Steam Early Access. The Sacred Tears True is definitely one of these games. A unique blend of visual novel, card battle and old-school JRPG elements, Sacred Tears is a unique and niche-fulfilling title. The question is, can that niche appeal to a wider audience?

The Sacred Tears follows the story of two young thieves, Seil and Seana, trying to become renowned members of the Thieves’ Guild, and trying not to go broke doing so. The art is the first thing that caught my eye. While most of the game itself plays out in typical 16-bit style, there are wonderful chapter transitions and character arts that appear throughout the game. There are 24 total story missions and 24 side missions, so there are plenty of stories to get through in your time with Sacred Tears.

The key art of Sacred Tears is beautiful and sets the scene nicely for each episode.

Advertised as a doujin RPG, Sacred Tears combines the classic look and feel of a SNES JRPG with storytelling elements akin to the visual novels of Japan. Now, as a preface, I’m no stranger to visual novels. I’ve read and enjoyed many; Fate/Stay Night, 999, and the infamous Katawa Shoujo were all wonderful examples of how a visual novel could draw in larger crowds. In this case, however, the visual novel elements seem to drag on a bit. It often felt like I was just reading meaningless dialogue, and the story is no stranger to typical anime stereotypes, especially early on. Fans of this genre in particular may overlook it, but for someone who is new to the idea of a doujin RPG, it could be off-putting.

When the progression gets around to combat, the game takes an interesting turn. The battle system of Sacred Tears is a mixed bag. At times I thought it was deep and interesting, and then two draws later I was cursing RNG and wondering if there was any strategy to it. You fight battles in Sacred Tears through a card battle system, where you draw a hand full of action cards symbolizing offensive or defensive options. You lay down three cards, in the order you want them played, and then your cards are compared to the enemies’ cards to determine damage and effects. The idea is very interesting, as it was both a rock-paper-scissors duel to the death, but also an interesting way to make even mundane battles feel exciting.

The battle system is interesting, if you can figure it out and are alright with RNG

The problem I had with the battle system, and most of Sacred Tears, is that it was never clearly explained to the player. The most you get over the battle system in-game is a strange formula depicting what symbols overcome what in battle. It was never defined when playing a magic card would cause my mage to attack or heal, or why a two-sword attack had a golden symbol on it. There is a manual in a text file, but the feel of constantly Alt-Tabbing to the manual began to grate on me after the first few chapters. Most of the time, it felt like I was fighting the game to understand how it worked. Many of the game’s systems I learned on accident, and not in a fun manner.

The music of the game is of special note, however. Two composers famous for previous work in the doujin and anime industries composed the score, and it shows. The feel of an old-school JRPG is captured in the game’s many melodies, and it makes walking around town for quest progression a lot easier to bear. Which is nice, because you’ll be doing a lot of walking and talking in Sacred Tears. The controls are also very difficult to work with; at times, it felt like I was dealing with input lag, as the main character never quite seemed to respond quickly to direction changes. This leads to a lot of frustration from running into walls, especially when your quest objectives lies in a one-space-wide alleyway.

The towns are nice, but the walking controls and map are frustrating to work with.

As a whole, though, The Sacred Tears True will certainly appeal to the playerbase it aimed for. The doujin-style story starts off a little weak but gains traction as more characters and motivations are introduced, and the card battle system is interesting and fun once you get into it. Many players who would be hesitant to try this sort of game, however, might be better served starting on something with more polish.

The Sacred Tears True hits the mark for fans of the genre. However, unexplained game systems and anime tropes will keep those curious from appreciating it as much as the diehard doujin fans.