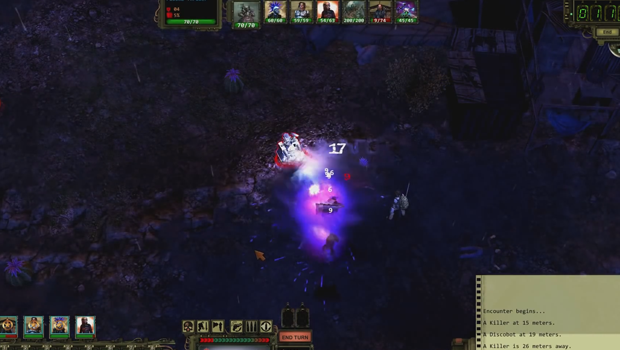 The original Wasteland debuted way back in 1988 – a primitive time, by most measures. The internet was really only a “thing” for universities (and the more tech-inclined attendees at that), video games were on the relatively scarce side compared to nowadays, and they were played on machines for which “more than one color” was the sign of cutting-edge equipment. So the fact that, not quite three decades later, there was still substantial demand for the sequel to this game really says something about the impression it made on the more ancient gamers around. Well, now – after many a false-start, dashed hopes, and more – we have finally have Wasteland 2 to play. The quick verdict:  inXile Entertainment has managed to bring back the spirit of Wasteland successfully, giving us a post-apocalyptic world that really stands out in its own right, managing to be fun, demanding and deep all at once. If you’re into turn-based tactical games, especially with an after-the-bombs-drop sci-fi flavor, this is a must-have.

Wasteland 2’s story takes place in a world struggling to piece itself together in the wake of nuclear disaster. A good share of the world is still irradiated, just of much of it is hostile, and humanity is struggling to crawl out from under the rocks and out of the bomb shelters to try and rebuild something approximating civilization again. Leading this effort (at least in your little slice of the world) are the Desert Rangers – a Texas-themed pack of soldiers and survivalists doing their best to tame a very hostile world. There’s no lack of games out nowadays that have the whole “experience a world after a cataclysm” thing going on, but the whole southwestern angle is – if not entirely absent – typically underplayed. Right from the get-go, despite having an unavoidable Fallout feel to it all, Wasteland 2 manages to feel unique in terms of the setting and story it offers to players. For a game that emphasizes exploration as a key selling point, it’s important to craft a world that actually provokes interest and the desire to actually search for what’s out there waiting for you. On this front, inXile has delivered in spades – and best of all, there’s a whole lot to discover, both in terms of areas to find and lore to read.

But in order to explore the world of Wasteland 2, you’re going to need to gather together a posse. The option to go into the game with a selection of pre-made characters exists, but of course the real fun comes from custom-assembling your own mix of would-be Rangers. For those of you who love to carefully pick and choose skills and stats to make your characters stand out – not to mention give them some real personality – chances are you’ll be pleased with the level of customization on offer here. Expertise with a variety of different weapons is possible, from good ol’ melee brawling to sniper rifles and just about everything in between. There’s also a nice slew of skills to pick from, each with various tiers of capability and taken all together the result is a wide range of customization options. Want to create a fast-talking charismatic shotgun-wielding toaster repair expert? It’s possible. The ‘big muscles, small brain’ stereotype, hits with fists’ stereotype? Have at it. It’s in your interests to make your team of four as diverse as possible in some ways – four snipers may find themselves fighting over ammo in a world where supplies are scarce – and most importantly, I found uses for every skill I picked up during my playtime. Having a diverse array of abilities and character customization options is one thing, but making sure these abilities are actually useful is another thing, and once again Wasteland 2 succeeds.

The combat system is another bit of success in the game, though with a particular caveat. The good news here is that the tactical turn-based system is implemented to great effect, with Action Points being the central resource all of the fighting really revolves around. Said points determine what actions you can take, how far you can move, and so on – nothing that’s really going to surprise anyone familiar with tactical turn based fighting (think X-com), but it’s well-implemented and intuitive. The combat can at times be punishing – not exactly something new to this genre, and the turn based tactical RPGs in particular seem to have more history with death being permanent than other genres do. The takeaway point here is that combat in Wasteland 2 can be demanding, even fatal  – so plan accordingly and be ready to pay careful attention to the actual “tactics” part of this turn-based tactical RPG.

Outside of combat, dialogue – and yet more gameplay – abounds. There are skillchecks to pass, new areas to discover, and most enticingly of all, decisions to make. Not every decision is simply a matter of selecting one or another menu option either. Going back to talking about Wasteland 2’s world for a moment, I will be frank: I am not a person who is normally moved by the story and dialogue in the games I play. I have, perhaps, an unhealthy amount of cynicism about plot, and tend to play even RPGs more for the fun of exploration, loot and experiencing novel game mechanics. But Wasteland 2 more than once managed to place me in situations where I felt this “immersion” thing that so many other players love to talk about. Decisions were demanded of me that made me second-guess my earlier inclinations. Risky situations with actual meaningful choices demanded a response from me – and, against all odds, I actually felt invested in the experience, in the world itself. This takes skill and care to pull off, and the fact that I was wrapped up in the world of Wasteland 2 provokes high praise from me.

With that in mind, there are some caveats. First, the game – while graphically above par – is still not the most amazing thing in the world. Character models, the environments, the map… they’re pretty (well, as pretty as a post-apocalyptic world of mutants and killers can be), but don’t walk into this one expecting to be floored by the eye-candy. Beyond that, the game has a few bugs, and from what I’ve read I’m not the only one to have experienced them – nothing utterly game-breaking, at least in my play-through, but I’ve had to restart a couple of times just to continue after one minor glitch or another. Considering the amount of care (not to mention developer/fan interaction), I’m more confident than usual that any issues like this are going to ultimately be addressed, and likely in a timely manner. Really, a game this long-awaited, and this well-crafted, is something I expect will be well-taken care of by its developers. Call me trusting.

In the end, what we have here is a beautiful game, and quite possibly one of the most long-awaited sequels (by those who still remember it) in gaming history. A game which launched on floppy disks in a pamphlet-thin “box”, breaking into a modern world where the competition is far, far thicker than it was in 1988. And yet, Wasteland 2 succeeds – it’s a beautiful title, in a unique-enough world, with character and personality and solid RPG gameplay. And it’s a must-have if you’re at all a fan of the turn-based squad tactical RPG genre.

Awaited for well over a decade by now-ancient gamers, Wasteland 2 manages to live up to the spirit of the original while going beyond it in terms of depth and detail. While there are bugs to be fixed and the difficulty may be too challenging for some, any lover of turn-based RPGs should add this one to their Steam library as soon as they can.