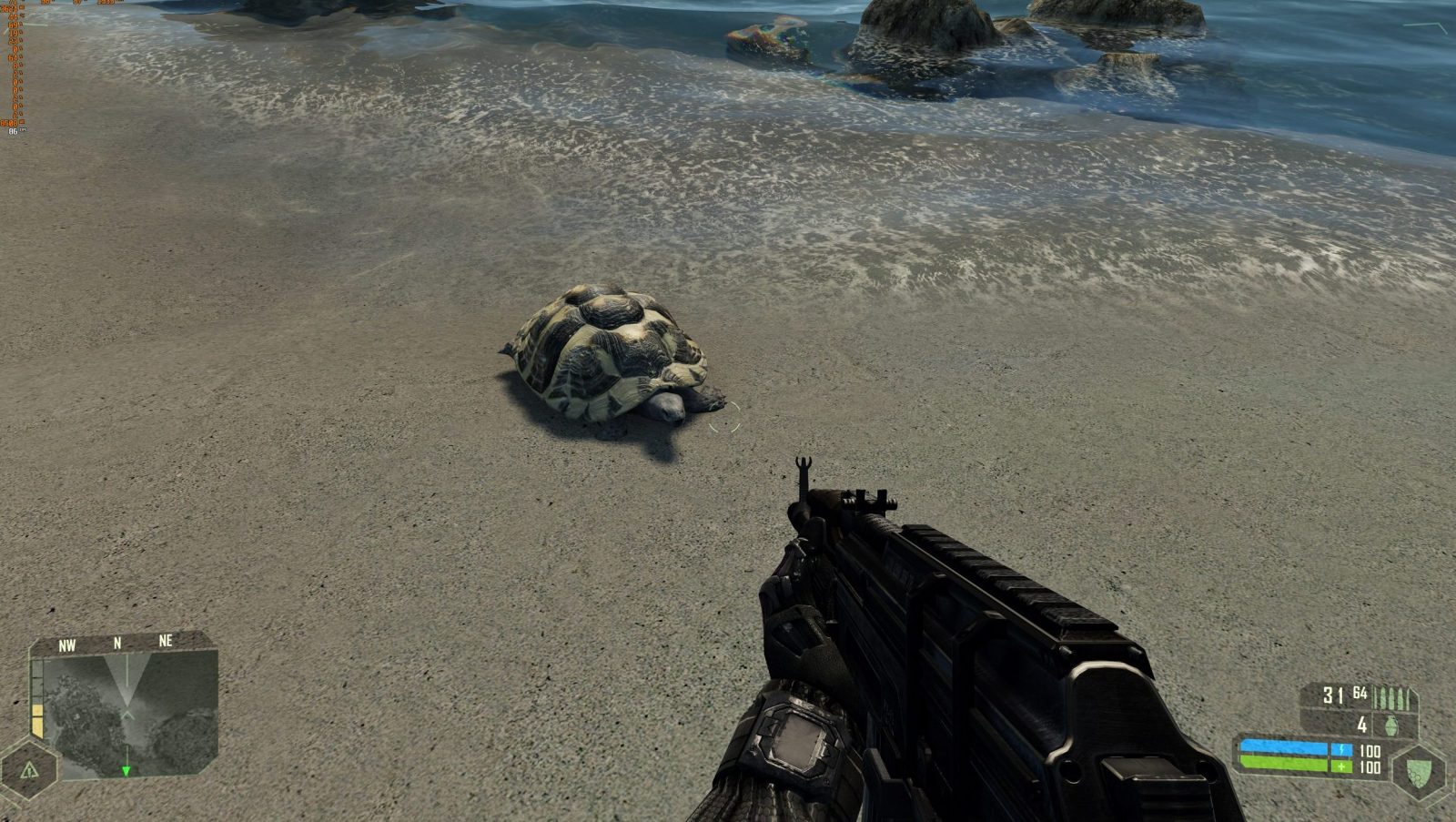 Who would have thought that Crysis, the PC game that was known for sending high-end PC’s crying home to their manufacturers, would ever make its way onto the hybrid Switch console? Yet, almost 13 years from its initial launch on the PC, we have the opportunity to play one of the most technically advanced and fun first-person shooters ever made on a mobile console. Crysis Remastered brings most of its glory to the Nintendo Switch: from its bullet-shattering audio, forest leveling destruction, and smooth-talking, nanosuit-wearing, super soldiers.

As someone who originally played Crysis on a Nvidia 9700m GPU, 8gb of RAM, and the mighty Intel Core 2 Duo (insert sarcasm), I knew my rig was outclassed, but it was something about trying to see if it could run Crysis that made me a fan. In 2020, we’re able to explore the dense jungles of North Korea and fight the good fight on the go. Let’s be clear, there’s no question that the Switch is underpowered when it comes to showcasing the cutting-edge visuals and physics of the original game, but let me assure you that there is something special about playing this on the Switch. I’d hate to call Crysis Remastered a technical achievement and leave it at that, because it’s so much more. It’s about experiencing one of the most fun and exciting FPS games ever made while on the go. Now, there are some artistic and gameplay upsides to this game being on the Switch, and there are also some glaring technical and game issues, so not all is perfect. But what ever is? 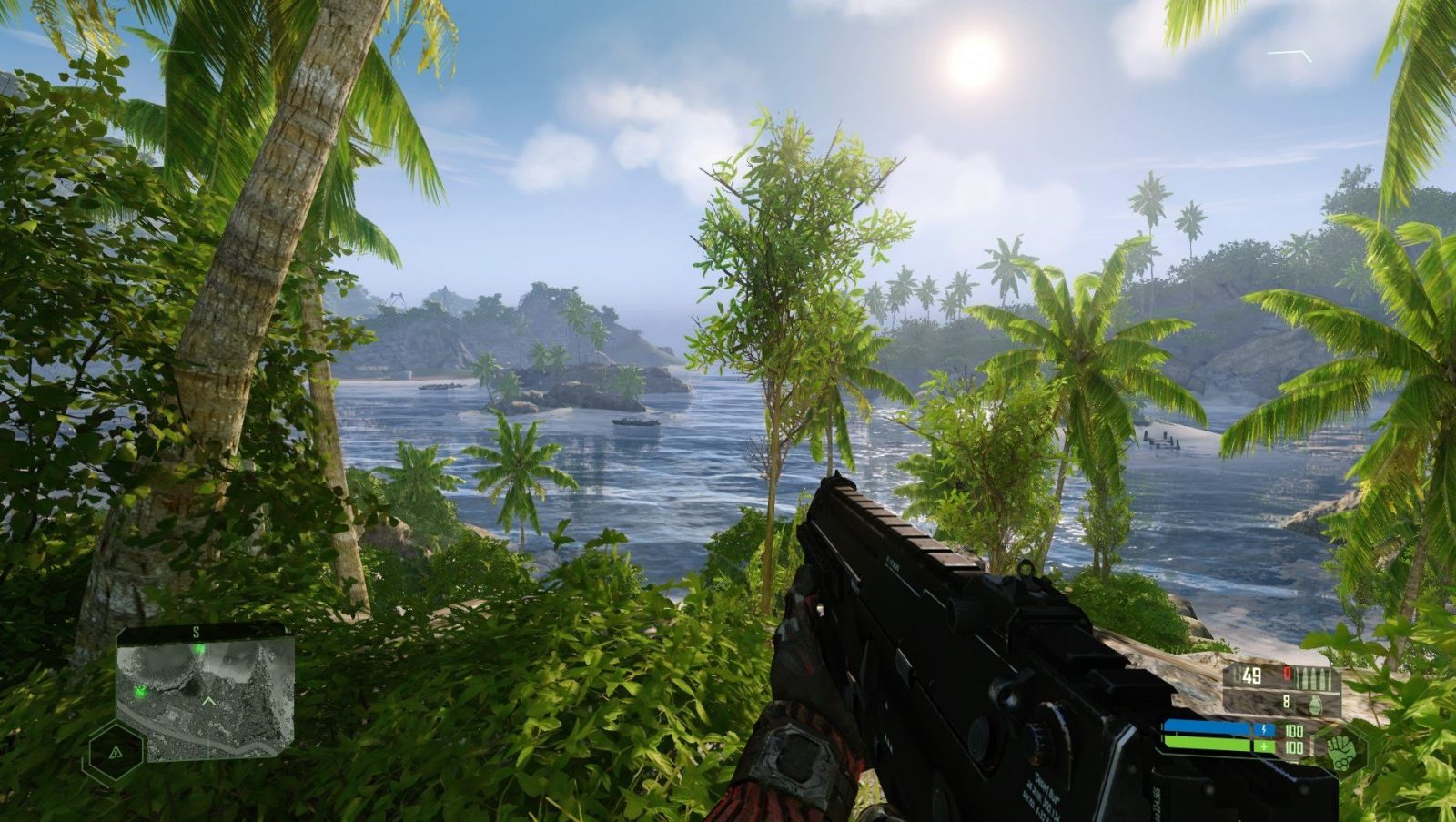 A storm is brewing

For those who are unfamiliar with the plot – you play as a soldier who wears a nanosuit that’s capable of some tremendous abilities: super-strength, speed, and cloaking are all enhancements that the suit gives you. You and your team are being dropped into North Korea for a special mission. Unbeknownst to you and your mates, there’s also an alien threat that looms in the background. If you haven’t felt it, this game should give you vibes of the original Predator movie.

I began my playthrough in handheld mode where I knew the visual fidelity and performance would be hindered. Initially, I looked for options that would give me some control of motion blur or other visual treats, but to my dismay, they weren’t available. I knew that a game that would have trouble maintaining a steady framerate and, coupled with what may be default-on motion blur or simply ghosting, would be a bit of a stomach-churning experience. Jumping into the game, I felt right at home when I saw Psycho, Jester, Aztec, and Prophet gearing up and getting ready for the paradrop behind enemy lines. The character models look decent and are well detailed. 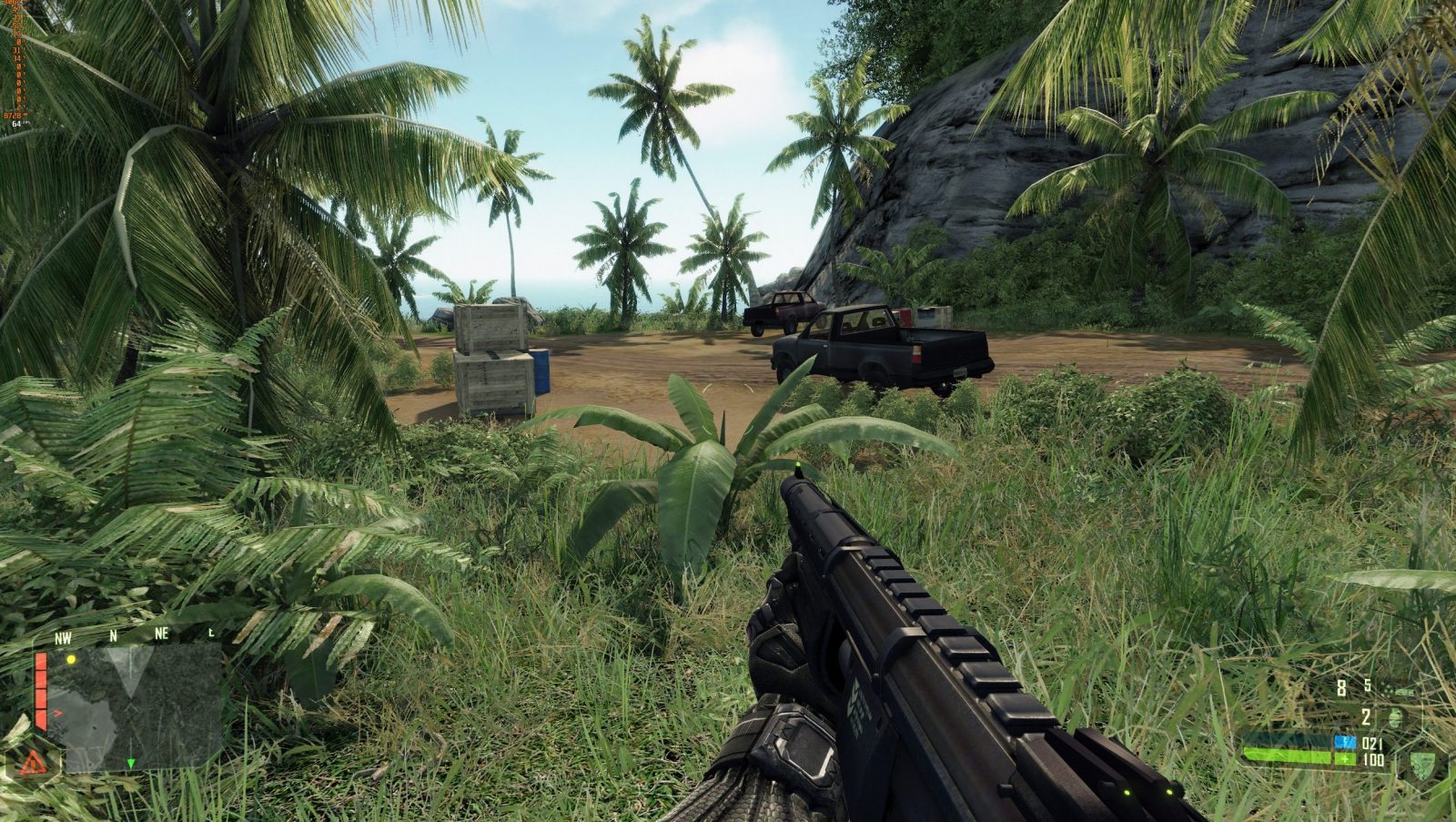 The first thing I noticed when I dropped into the jungle of North Korea was how well some of the draw distances were.  Like in the original, I could still mow down a tree just by shooting through its trunk, which made me happy to see some gameplay and physics options weren’t cut. The button layout was superb and didn’t leave me guessing as to which button did what. Swapping nanosuit abilities, firearm modes, and gun parts felt natural with the default layout. Being a remaster, I wished they had changed that using the silenced rifle drained your cloaking ability. What’s the point of a silenced rifle if it gives you away? Anyways, running through the dense forest with superspeed was surprisingly a great feeling and I noticed little to no frame drops or timing issues. Where I did find issues was when I would start any skirmish. The enemy would often disappear or not be where the bullets were coming from.

In a game that’s somewhat open world, the team behind this remaster did a decent job. This is important because enemies can and will spot you from far away and begin an assault. There is a lot of pop-in, so be aware that enemies, enemy artillery vehicles, and camps can appear out of nowhere. Vehicle control, shooting, and use of nanosuit abilities feel very similar to what many of us have experienced in the original game, but that’s only half the story. There’s quite a bit of technical issues underneath that still need to be ironed out. 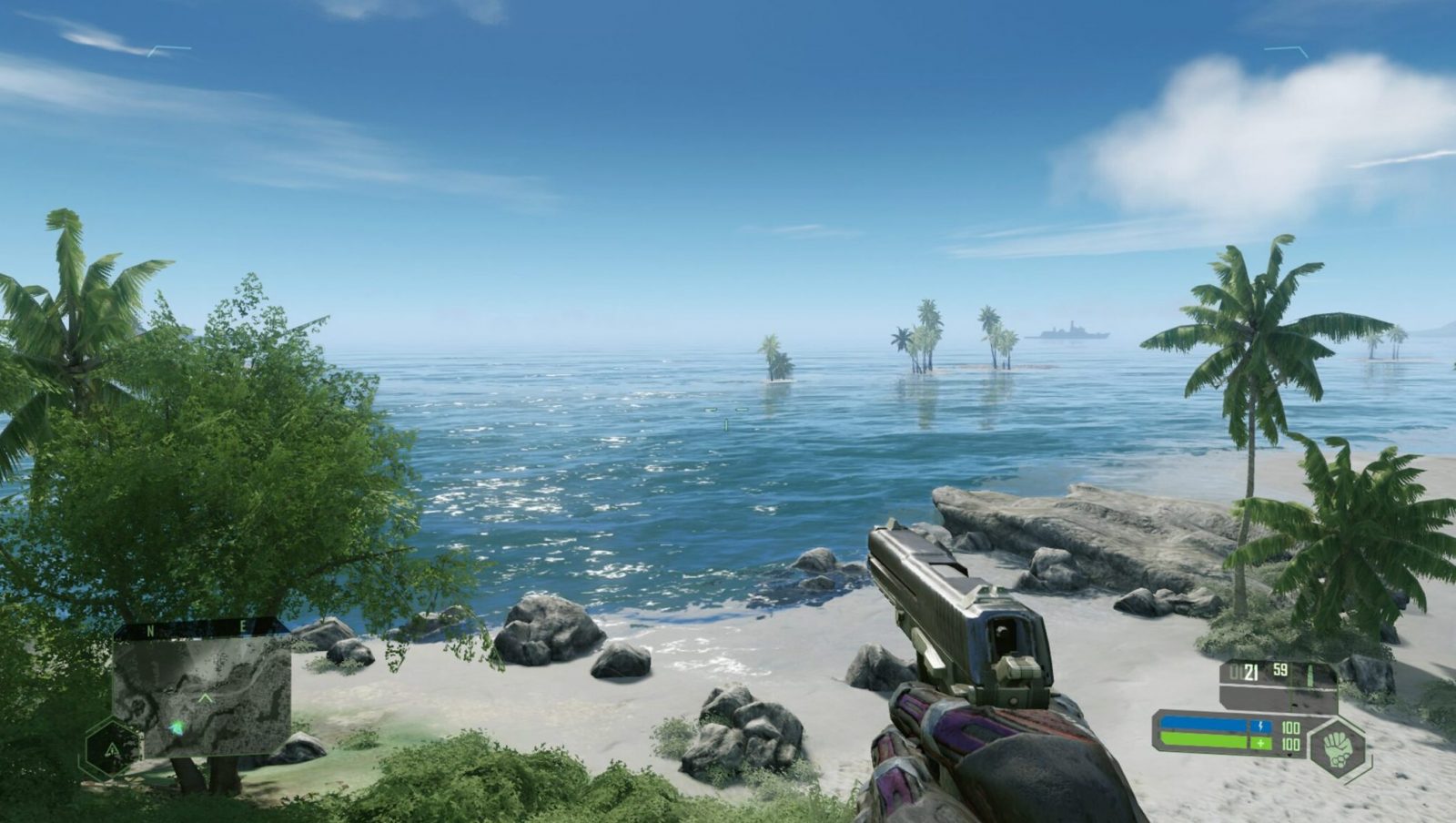 Have gun, will travel

As I scoured the beach, getting my bearings, I immediately noticed that the black levels, shadows, and shaders definitely suffered on the Switch. Objects close up and far away were very difficult to make out, especially when in huts or corridors where baked in lighting was used to illuminate the area. Collectible items in the world were hard to spot because of incorrect lighting and shading, and don’t get me started on fighting the enemy in the jungle. I would say this would be a good thing, where the enemy in their BDU’s blended perfectly with the jungle, but because of the poor lighting, low textures, and resolutions, I would often walk up to an enemy and never see them, and they would never see me. The AI in the game appears to be either not my enemy and sees me as an ally, or they just waved the white flag and gave up. Many times, I would be standing in front of an enemy and they wouldn’t see me, fire at me, or even notice my existence. I’ve even killed enemies, had them disappear, and then come back to life to shoot me in the back as I left the area.

The controls took some getting used to as the dips in framerate cause a lot of input lag, especially when in the middle of a tough skirmish with two or more North Korean militants or the Ceph. The gun controls feel muted and unresponsive, partly because of the unstable framerate when a lot is occurring on-screen. Fortunately, the game supports the Switch’s motion control, which makes it so much easier when attempting to pull off a precise headshot or clearing a brush full of commies.
These are unfortunate downsides of porting a game of such monumental design to a system that was never built to run games like this. 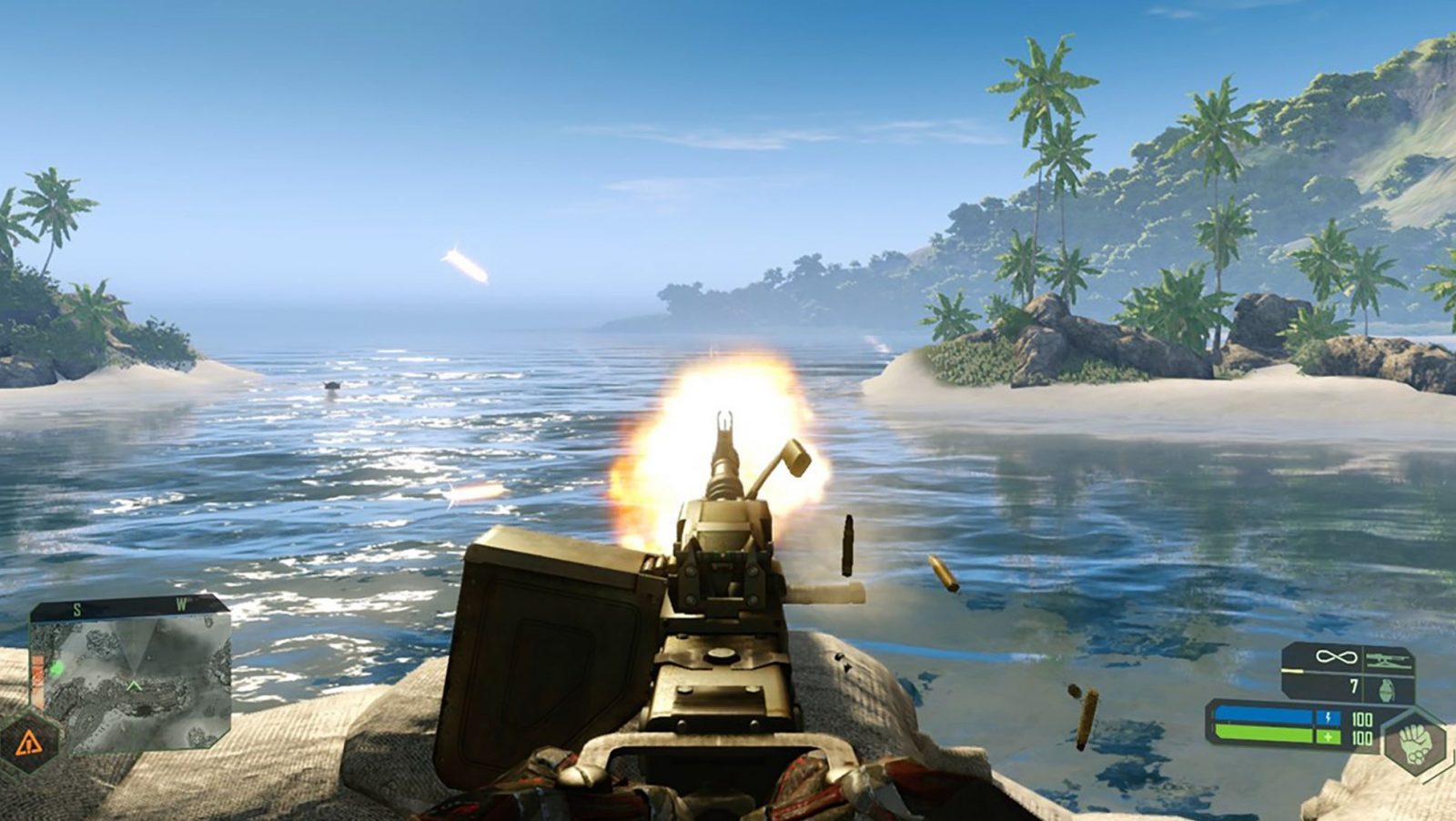 When in docked mode, things are much more tolerable, as my 4k tv helped clean up anti-aliasing issues, lighting issues, and a bevy of other issues that can’t be fixed in handheld mode.
In docked mode, the gunfire and explosions were consistent and didn’t cause too much of a performance dump. In fact, I found that it was much more playable and comparable to the Crysis of the Xbox 360 and PlayStation 3 versions: particle effects lingered in the air and fire and explosions didn’t cause irregular lighting issues. In handheld mode and in docked mode, I experienced a lot of game crashes when in firefights or at loading screens, forcing me to the Switch’s home screen and exiting the game and restarting. On the topic of loading screens: they are long. Long enough to make yourself a sandwich and eat it long. Maybe in future updates, these crashes and small issues will be ironed out.

Crysis Remastered is an amazing technical achievement to have it run on the Nintendo Switch, but at what cost? On the surface, in handheld mode, it suffers from framerate issues and stability; in docked mode, things get better and make the gameplay tolerable. Unfortunately, it’s the technical issues that hurt the game the most.

T.K. is a freelance writer, narrative designer, and author. Writing and developing narratives and giving voices to digital world and characters is his passion. As a game writer, QA game analyst, and editor for Gaming Trend, he enjoys being a part of the gaming industry.
Related Articles: Crysis Remastered
Share
Tweet
Share
Submit