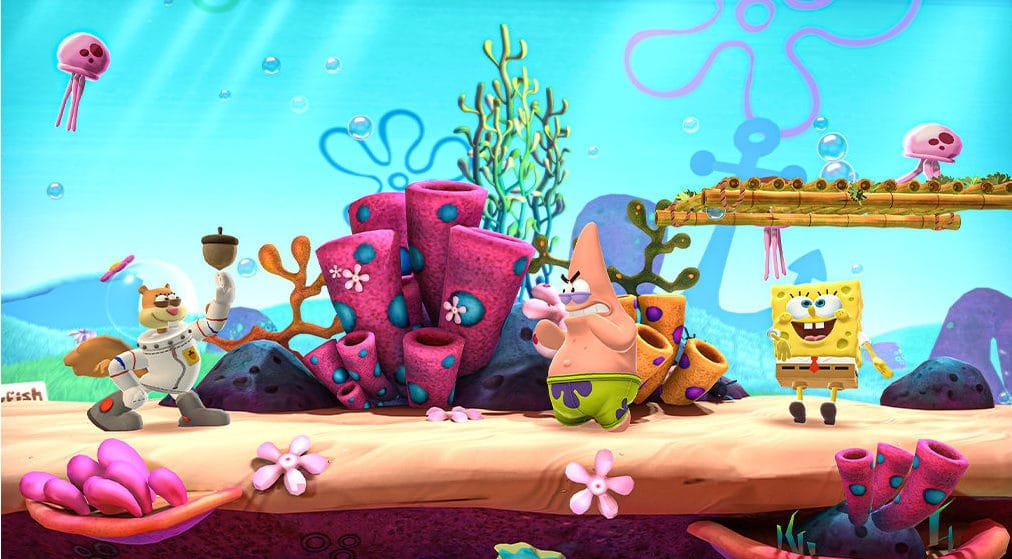 Nostalgia is a very powerful thing. It can make you irrationally happy, angry, sad, or all of the above. At the end of the day it can bring people together for good or for bad. In the case of Nickelodeon All-Star Brawl, building on the legacy of Super Smash Brothers but utilizing classic Nick-toons for its roster, nostalgia will keep it alive. 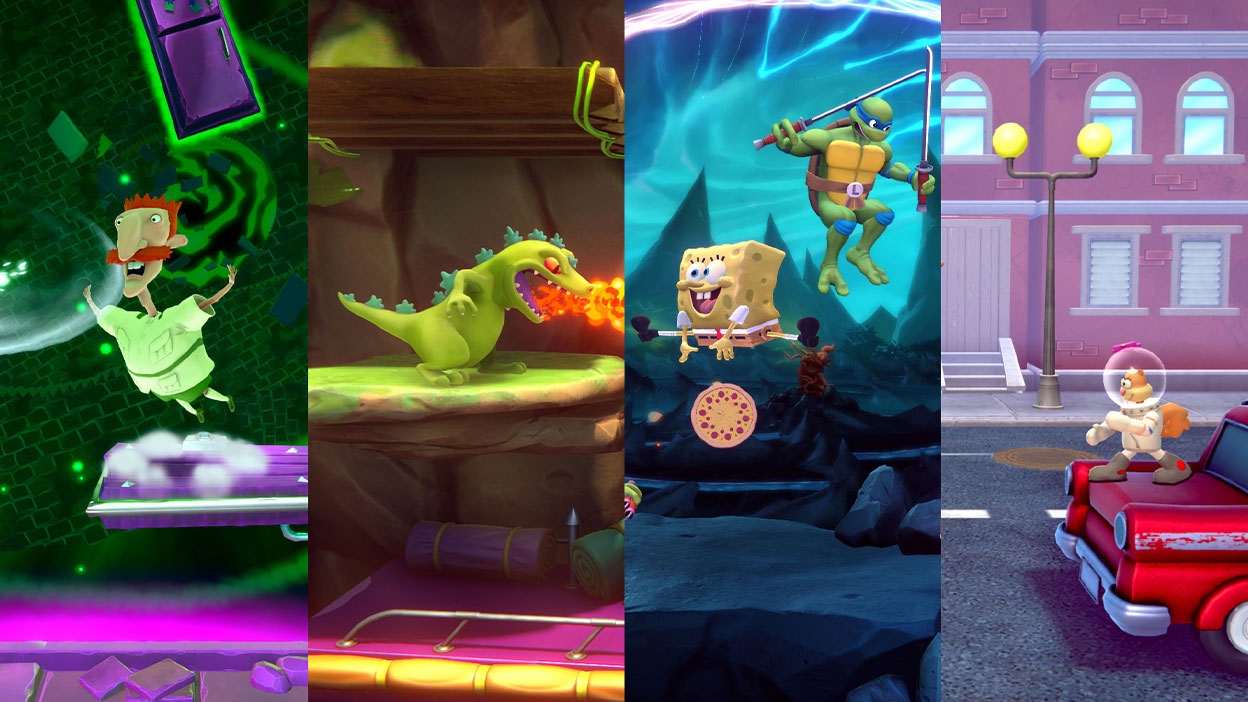 Very quickly I realized that to give this game it’s full chance I needed help. So I got together a group of my friends who all love fighters and we streamed together for about three hours. We played almost all the stages, tried out all the characters, and tried to experience a little of everything before the end of the stream. This gave me so much joy from a pure nostalgic standpoint. Seeing Korra beat up Spongebob and then Reptar coming out of nowhere were just a few of the hilarious sights we witnessed throughout our time playing the game. With 20 characters and stages at launch, we had plenty of time trying new things before deciding who we wanted to try and focus on getting good at. That should be Nickelodeon All-Star Brawl’s selling point – crazy fun with friends.

The stages were a grab bag of styles and functions. The first one we were dropped into was “Powdered Toast Trouble” and right off the batto my friend fell into the milk and died. It was a ridiculous way to set the tone, and we laughed for a solid three minutes. Each stage is unique and has something to talk about. Some stages are made more for the “competitive scene” featuring nothing more than 1-2 platforms and then a base like “Harmonic Convergence.” Others like “Glove World” and “Wild Waterfall” are sometimes so chaotic we spent more time losing our own lives than killing our opponent. Both types were fun and provided something for everyone.

Let’s talk about gameplay and characters. Each character felt unique and fun to learn. As an Avatar: The Last Airbender fan and a Legend of Korra fan, I was curious about how they would showcase the difference between Aang and Korra in-game. I was not disappointed. Aang was light and quick, using his staff for air bending attacks while moving quickly from one platform to another to avoid taking damage. Meanwhile, Korra used a lot of Earth and Fire bending attacks and moved more like a tank-type character. Having each character feel and move differently really does add to the brawl itself.

For each character you have light, heavy, and special attacks. Each one can be mapped to whichever button you wish, which I appreciated. Light attacks usually include a simple, yet sometimes goofy looking, punch or kick. The heavy and special attacks generally have more of a character specific flair to it. For example, April O’Neil uses her microphone and cameras for attacks, which send her flying towards the opponent with a camera flashing before their eyes. Movement was fluid and allowed for quick transitions between attacks. It did take my friends and I a moment to learn how to move from a higher platform to a lower, but that could have been from us jumping straight into the brawl instead of taking the time to do any practice.

At this point, I have played quite a few online matches to some success, but you can tell there are already some very competitive fighters already playing. I’ve been victim to the edge guard finisher quite a few times. We also have one “overpowered” character so far, and that’s Reptar. However, for a first game to the series, it has definitely taken inspiration from some of their predecessors to make a game that, overall, feels balanced. 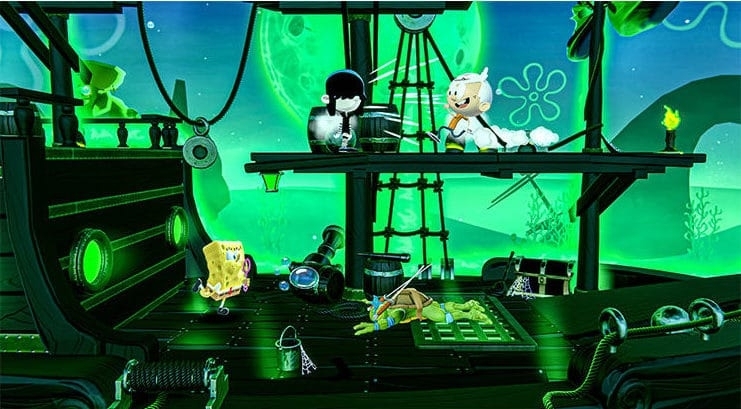 I was worried about playing a fighter like this with an XSX controller. However, I was surprised by how intuitive it was from the start. It felt very well streamlined even on an XSX controller. The ability to map the buttons the way you want was extremely helpful and led to a small learning (well, relearning) curve. The AI is very challenging which was extremely helpful to learn the game early. Even level 5 (the default level) was too hard for me while learning the moves. However, as I got better with the characters, the more challenging AI helped me out quite a bit

Nickelodeon All Star Brawl’s problems come from small but significant layers of polish that are not present. There weren’t any names or icons for the characters in the main menu, which led to some confusion about the characters’ identities. It’s hard to sell a character to play when you have no idea who they are without looking it up. If nostalgia is your selling point, remember that you’re catering to multiple age groups and not everyone watches every show. A simple name/icon representing the show underneath the character would add a lot. There was also an odd lack of character specific voice lines for a game made up of iconic animated performances.. If I’m punching Spongebob, I want to hear a goofy Spongebob sound from him..

Online play was overall good. When making personal rooms, we had a slight issue with the menu not sending invites to friends. However, that was easily worked around by just going to the XBOX menu and inviting through the friend’s list. We had one to two lag spikes but it was never longer than a few seconds and we actually never had anyone lose a life due to a lag spike. I’ve played quite a few fighters online, and was impressed with the attention to this feature from my experience.

Overall, Nickelodeon All-Star Brawl is a solid base of a game that will get better with time if new content is consistently announced. The addition of new characters (here’s hoping for Jimmy, Timmy, and maybe some of the Rugrats), attention to quality of life updates, and new game modes will give this game so much more than nostalgia to lay its head on.

A game with a boat load of Nostalgia and good bones. A fighter that’s fun with friends, challenging with AI, and competitive online. With time and love, Nickelodeon All-Star Brawl could be a top tier fighter in the near future.

Adam is a musician and gamer who loves his partner in crime, Regan, and their two pets Rey and Finn. Adam is a fan of Star Wars, NFL Football, and gaming in general. Follow Adam on Twitter @TheRexTano.
Related Articles: Nickelodeon All-Star Brawl
Share
Tweet
Share
Submit