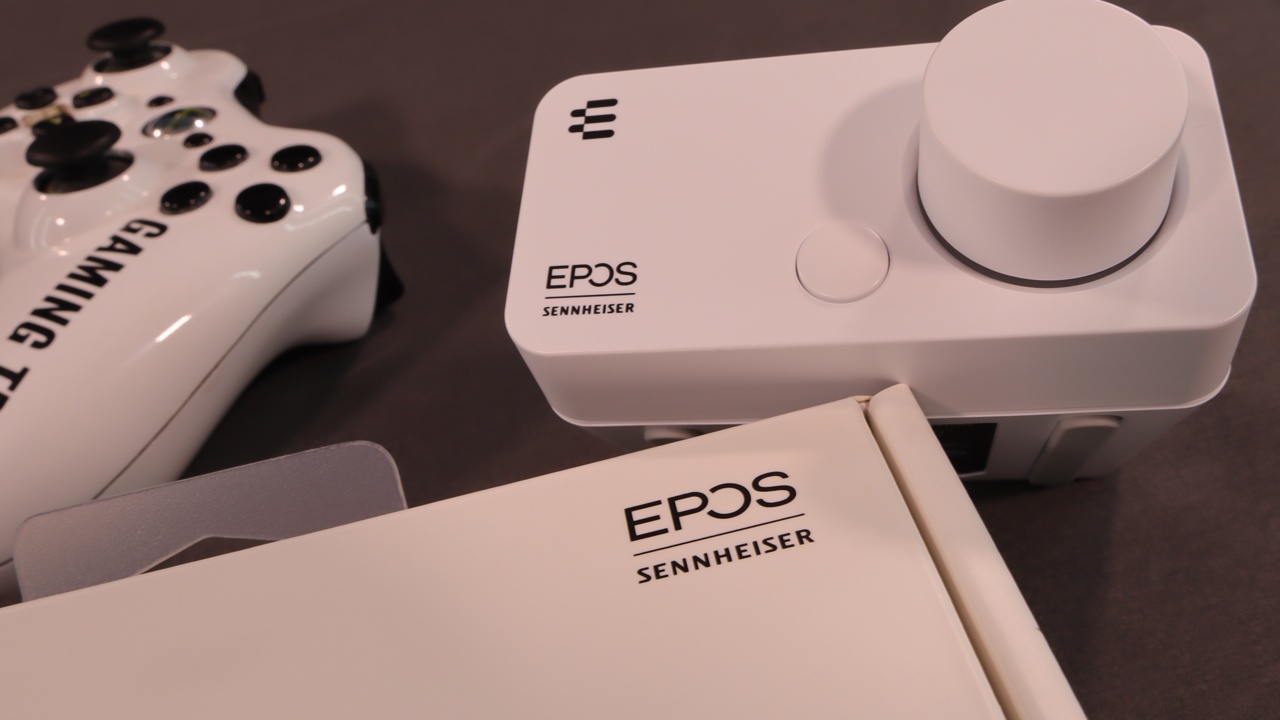 I’ve recently purchased a high end gaming laptop. It has every bell and whistle you can possibly want including a 2080 Super, a 240Hz refresh monitor, Thunderbolt 3 support, all M.2 storage, and more. You know what it doesn’t have? Decent audio. In fact, the audio on this device is the worst I’ve ever heard from a laptop. My Razer Phone 2’s pair of tiny speakers deliver a more clear sound. It’s unfortunate and there’s little I can do about it. Well, EPOS and Sennheiser, two collaborators on high quality audio equipment, have delivered a potential solution — the GSX300. This USB-powered device offers full 7.1 surround sound and much more in a tiny external sound card. Let’s unbox it and take a closer look.

Clearly simplicity is the watchword of the day with this device. The only thing in the box is the device, a short instruction and warranty manual, and the USB cable to connect it. But why do you need it? That’s a great question, but first you need to understand what it is. Not merely an amplifier, the device is actually a Digital to Analog Converter, or DAC for short. Digital audio is the computer’s interpretation of the analog sound coming from an instrument. The sound card (or more accurately the chip coupled with the software driver) then converts that digital signal back into an analog signal so we can listen to it. “But wait”, you might say, “I already can hear sound from my PC — doesn’t it already have a DAC?” and you’d be right to ask. Yes, you do. Now, realize that your motherboard manufacturer threw that in “for free” as part of the board, meaning that they’ve purchased what is likely the cheapest hardware and software to keep their prices competitive. It’s likely a very basic chip, doing a very basic job, resulting in a very basic sound. Your sound could be better if you just had a better DAC. Even the most expensive Klipsch speakers won’t realize their potential unless the underlying hardware is delivering the best possible conversion.

DACs tackle poor audio quality by focusing on two specific adjustments — filtering, and jitter correction. Filtering is necessary as, during the process of converting the signal from an analog source to a digital one the sampling can occur outside of the normal 20Hz to 20,000Hz hearing range. This “extra” data can manifest itself as aliasing, just like you’d see on a video card — think of it as “audio jaggies”. If it’s not properly filtered out this can result in that robotic modulation sound, or the occasionally high pitched squeal or pop. We’ve all heard it — now you know where it comes from.

The other area a DAC focuses on is jitter, and comparing it to video makes it easiest to understand. When you see jitter in video it appears as lag, tiling, modulation, and other artifacting that ruins the overall picture. In both cases the signal is digital, made up of 1s and 0s. These come into the processor at a specific rate and have to be processed in a specific order — first in, first out. When that timing comes out of sync you get jitter. The same thing happens in sound, and it’s equally as noticeable. A high quality DAC does flow control by moving the processing timing away from the internal clock generator of the motherboard DAC, using it’s own external dedicated clock generator to buffer and smooth out the rate. This ensures that it correctly interprets the on or off signal of the digital input and properly translates them into the correct frequency and amplitude. Without an oscilloscope and a dry erase board to give you entirely too much information on this topic you’ll have to just take my word for it when I say “A high quality DAC makes it better”. You’ll be happy to know that this “just works”, and not in the Skyrim kinda way. Now that you understand all the internal pieces, let’s get into the specifics of the EPOS GSX 300. 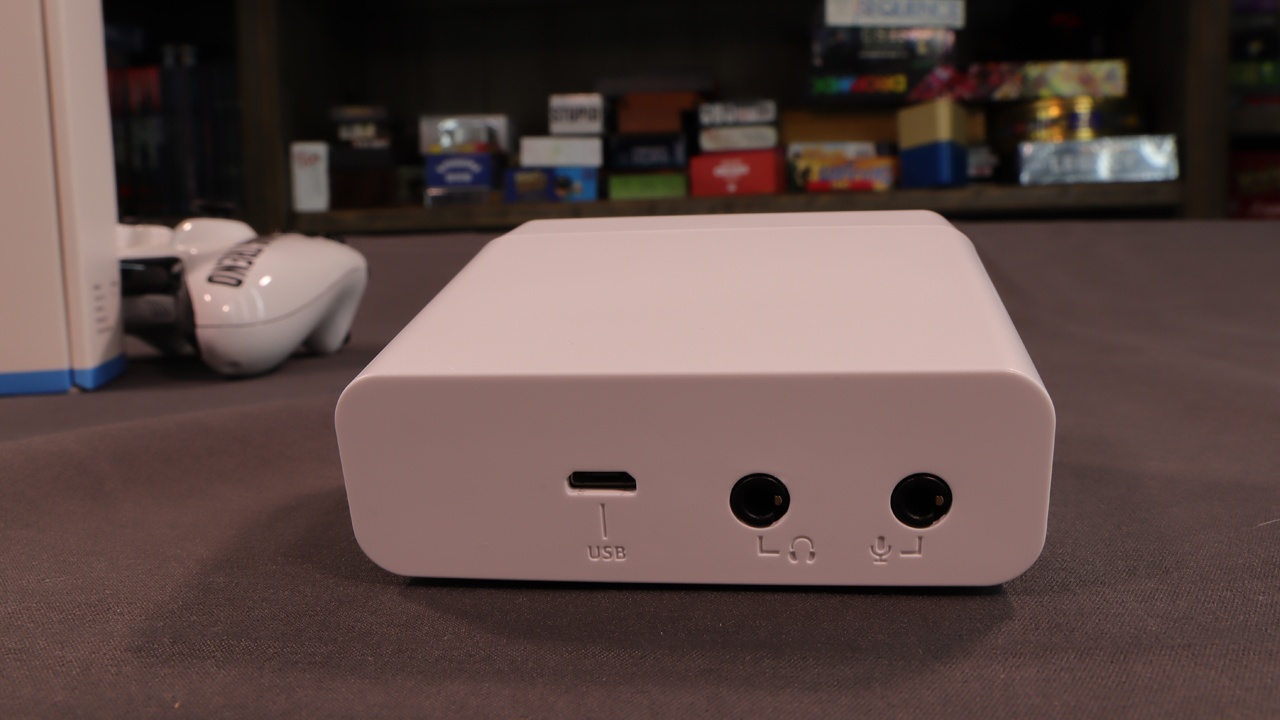 The most obvious thing about this unit is the simplicity of it. This isn’t a giant blocky rackmount DAC like we’ve seen in the past. Instead they’ve gone with a sleek design that’ll inconspicuously fit in nicely with anything else on your desk without taking up a ton of space — you can get it in black or white to match.

Under the hood, the DAC supports 24 bit / 96 kHz audio in stereo, and 16 bit / 48 kHz when using the virtual 7.1 surround sound. This is accomplished with the “Smart button” on the front of the device. This button also lets you toggle between presets, though I wish that these functions were located on a second button. The presets are all managed by the free EPOS Gaming Suite software, which we will touch on in a minute. The oversized dial on the GSX 300 controls volume, as you’d expect. Unlike Windows 10 that increments in 5% values, this button moves up and down at just 2%. Better still, there is a tactile detent instead of a smooth rotation for more precision. Again, simplicity was obviously baked into the design.

Heading into the software, there is a wealth of available tuning options for the GSX 300. You can toggle the use for the smaller button on the face, having it cycle through presets or between stereo and simulated surround sound. I don’t frequently switch between 2.0 and 7.1, so I have mine set on preset toggle, though you don’t have to guess which mode you are in — the ring around the volume control is blue if you are in stereo, and red if you are using 7.1 surround sound.

There are four presets you get right out of the box, though you can create your own as well. Music, esports, movies, and flat each have different levels and the differences between them are vast. Esports is more treble focused to help bring commentator voices forward, and movies, and music deliver a rich and warm tone that balances to deliver the best performance from the two different media types. You are, of course, welcome to tweak anything within the 64Hz to 16kHz so it fits your liking. There’s even a slider to introduce or reduce reverb to further tweak the simulated surround sound.

As the GSX 300 has a separate jack for microphones and headsets, meaning you can separately adjust the two sound options independently. The software also has a voice enhancer to play with the gain, sidetone, noise gate, and noise cancellation to bring out the best of any headset. A little adjustment can make a low-end headset without active noise cancellation sound pretty decent simply by warming up the sound a bit and cutting any noise with the DAC.

This is a fantastic entry level product into the world of Digital to Analog Converters. My wife is a musician and spends most of her days working on audio. I, on the other hand, have lost ¾ of my hearing due to a military accident, so judging audio isn’t my forte. She’s been using this DAC for days straight, comparing it to her high-end rack mount DAW and with a variety of headphones. If she’s impressed, I’m impressed…and she’s impressed. She did note that the GSX 300 doesn’t have quite the flexibility of a high end DAC, nor the deeper adjustments, but the plug-and-play nature of it makes it incredibly easy to use. When a decent budget DAC costs three times the price and is three times the size, it’s easy to see where this device fits.

If I had one wish for the hardware design of the GSX 300 it’d be one more small dial — independent voice channel control. The oversized audio dial is great for incrementally adjusting sound, but it’d be nice to be able to adjust in-game voice without having to resort to alt-tabbing to the EPOS software.

The GSX 300 has a 2 year warranty, and an MSRP of $79.99. It’s not often you see an entry-priced hardware item with more than a 90 day guarantee of quality, but here we are. I can’t say that I’ve ever had an EPOS or Sennheiser device fail on me, but it’s nice to know I’m covered should that occur.

The GSX 300 is a fantastic in-line upgrade offering up excellent DAC technology in a simple and sleek package, and at an excellent price. The software provides a great deal of additional flexibility and customization, sure to turn poor sound into decent, and decent sound into great.

Ron Burke is the Editor in Chief for Gaming Trend. Currently living in Fort Worth, Texas, Ron is an old-school gamer who enjoys CRPGs, action/adventure, platformers, music games, and has recently gotten into tabletop gaming. Ron is also a fourth degree black belt, with a Master's rank in Matsumura Seito Shōrin-ryū, Moo Duk Kwan Tang Soo Do, Universal Tang Soo Do Alliance, and International Tang Soo Do Federation. He also holds ranks in several other styles in his search to be a well-rounded fighter. Ron has been married to Gaming Trend Editor, Laura Burke, for 21 years. They have three dogs - Pazuzu (Irish Terrier), Atë, and Calliope (both Australian Kelpie/Pit Bull mixes).
Related Articles: EPOS GSX 300 Sound Card, Hardware
Share
Tweet
Share
Submit