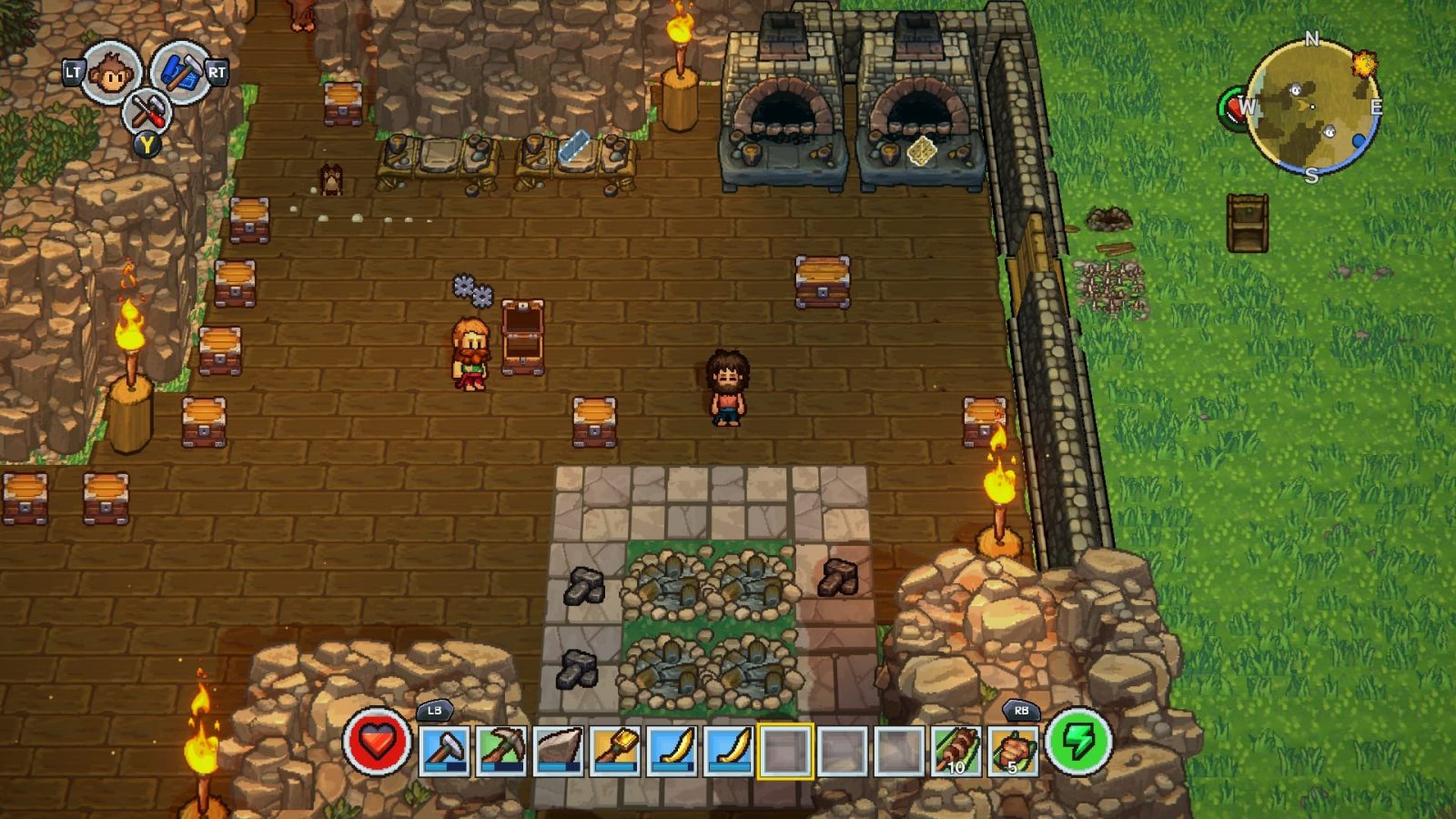 The Survivalists is an island survival game in which players mysteriously wash-up onshore in tattered clothes and must reap the resources of the island to survive. You must stave off starvation and equip yourself with weapons and tools so that you build a shelter and protect yourself from enemies. Or, go on the offensive while exploring the map and collect treasure from enemy strongholds. The graphics are comparable to glorified 8-bit graphics, and your view of the world is from up in the air above your character, so it reminds me of a Pokemon game visually. The view from in the air makes things a little easier because you can often see obstacles or enemies well before they’re within striking range.

The audio is simple and lovely. A soundtrack plays in the background that is charming if you stop and listen to it, but it doesn’t get repetitive and it’s not overbearing. A different song plays while you raft around the map that just helps make you feel like you’re going on an adventure. The sound effects are of higher quality than the visuals, so it seems fantastic, by comparison. Tinkering with wood, mining rock, and fighting a wild boar all sound distinct and appropriate.

The game can be played solo or online with others. The characters are somewhat customizable. You can set their skin color, hair color, hairstyle, clothes, etc. to just about any color you can think of, so although you and your friends all look pretty similar, it’s easy to identify who is who in the moment. If you host a game, you are given the option of restricting what others can do, which sounds like a nice anti-griefing mechanic, but the settings reset every session, so it became a little annoying having to grant my friends access to stuff.

The map starts out blank and is gradually colored in as you explore the map and discover new areas. To feed yourself, you have to forage for plant ingredients or hunt animals for their meat. Meat has to be cooked over a fire to be eaten, and the game offers you a small collection of recipes to choose from that involve lots of different types of ingredients.

You can craft some simple parts of tools via a quick access menu. More advanced items can only be built at a crafting table by choosing a blueprint that you have unlocked, and then filling it with listed ingredients and crafting it with a multitool. Crafting one item unlocks the next, so there is a nice feel of progression built into that process. There are times when you have to craft a part in order to craft another part in order to craft ANOTHER part in order to craft a thing, like turning wood into sticks, into wooden planks, into wood flooring, or wood and pebbles into a handle and a handle and stone into an axe, etc. This felt frustrating sometimes and I found myself constantly having to pick up and drop items over and over because of the limited player inventory space. You also can’t craft a larger number of items at once, so big jobs mean you’re constantly opening the menu and selecting the same thing over and over. Simple jobs could really set you back sometimes and slow your progress in more interesting areas.

In addition to inventory items that you hold onto or store in chests, structures can also be built. You can build a small base with protective walls and floors of different materials, set spike traps for enemies or prey, build a raft and explore the other small islands on the map, and build beds, which are required for sleeping through the night and saving the game. While some of these things are undoubtedly useful, the game just isn’t sophisticated enough to allow you to customize things to the point that they look good. You can’t rotate a bed, for example, so creativity is mildly stifled.

There are lots of things that can hurt you in The Survivalists. There are natural obstacles like hot lava surfaces and swarms of stinging insects, wild animals that want to do you harm like boars, tigers, and sharks, and little, green, orc-like enemies wearing armor that want to eat you. You can craft weapons like swords, a bow and arrow, or a spear to protect yourself and earn some top-quality meat.

One of the more unique features of The Survivalists is the inclusion of monkeys. Monkeys can be found randomly all over the map, and they’re always in need of something. Sometimes they want you to make them fruit salad, or sometimes they’ve been captured and put in cages and want to be released. If you do help a monkey, they become a follower and they can help you complete even the most difficult of tasks. You can hand a monkey a chest, for instance, and make them carry your crap around for you. You can also have them mimic your action, so they can mine for you, cook for you, craft for you, fight for you, etc. Sounds great, right?

Unfortunately, the monkey mechanics are pretty weak. Opening the monkey menu, where you give them commands, automatically calls all monkeys nearby over to you, so it is way too easy to accidentally interrupt their tasks. The monkeys are required to have possession of the appropriate tool to complete a task, so you also have to monitor the life of that tool or carry around extra tools for your monkeys when they break. Monkeys also wander around aimlessly about the map – there is no option to ask them to sit still. Sometimes, assigning a task to a monkey is annoying and takes up enough time that you’re better off just completing the task yourself. Also, for some reason, orcs attack your monkeys as if they’re one of you, so battles that could have been a lot of fun often devolve into you chasing around your (usually) defenseless monkey and protecting it.

Besides the spotty monkey menu, there are a few other controller mechanics that could have been done better. Aiming a bow and arrow involves holding a trigger and moving a target area that appears at your feet across the ground to your target. Surely pure directional firing would have been easier. Re-arranging different items in your inventory is also weirdly difficult. Bumpers select slots to the left or right, and the directional pad drags the selected item to the left or right, bumping over the item you place it over. Confused? I was, too! Sailing is another odd one. Whatever direction the sail faces is the direction your raft moves. Sounds easy enough, but the sail doesn’t rotate directly with the left stick, it just spins clockwise if you stick right, and counterclockwise if you stick left. A lot of times, I accidentally spun my sails and threw myself off course unnecessarily. I don’t know if the developers tried to be a little different with all of this, but it makes the game less user-friendly.

Progression in this game means building things over and over… I think. It’s honestly tough to tell because there appears to be no clear objective. A game like Minecraft is an example of a great game with no clear objective, but Minecraft is so insanely open-ended and customizable that you can make things look absolutely amazing. In The Survivalists, you can build little simple forts and move your stuff around in chests, but to what end? The bases you build aren’t interesting enough and don’t look good enough to keep your interest. There is the occasional dungeon you can infiltrate and loot, but all of them are so tiny! Your spelunking adventure is over in a matter of minutes and you’re back to building and crafting.

The Survivalists is just an OK game that you will probably enjoy for a few weeks and then put away and never play again. It’s a shame because it has the foundations of something excellent, but it’s all just too simple and tedious. If the mechanics were better, the crafting was easier, there were more things to build, more types of mobs, and some clear objective like escaping the island or fighting a series of mini-bosses, we wouldn’t be talking about a little throw-away game, here; we’d be talking about a true hidden gem.

Tim, originally from where Fallout 76 takes place, is a writer, soccer player, cook, baker, and of course, gamer, just looking for his teammate-in-crime. When it comes to gaming, he enjoys long walks on the beaches of Normandy. He loves traveling, especially fast traveling because it saves lots of time. He's 6' 4" so he's saving up for an XL standing desk for his TV and Xbox. He's just as comfortable going out on adventures as he is staying in with a glass of Nuka-Cola. He's very easy-going, or peaceful-going, or whatever the easiest difficulty is called. If you want him to, he'll tell your parents you met him at the Winking Skeever.
Related Articles: The Survivalists
Share
Tweet
Share
Submit