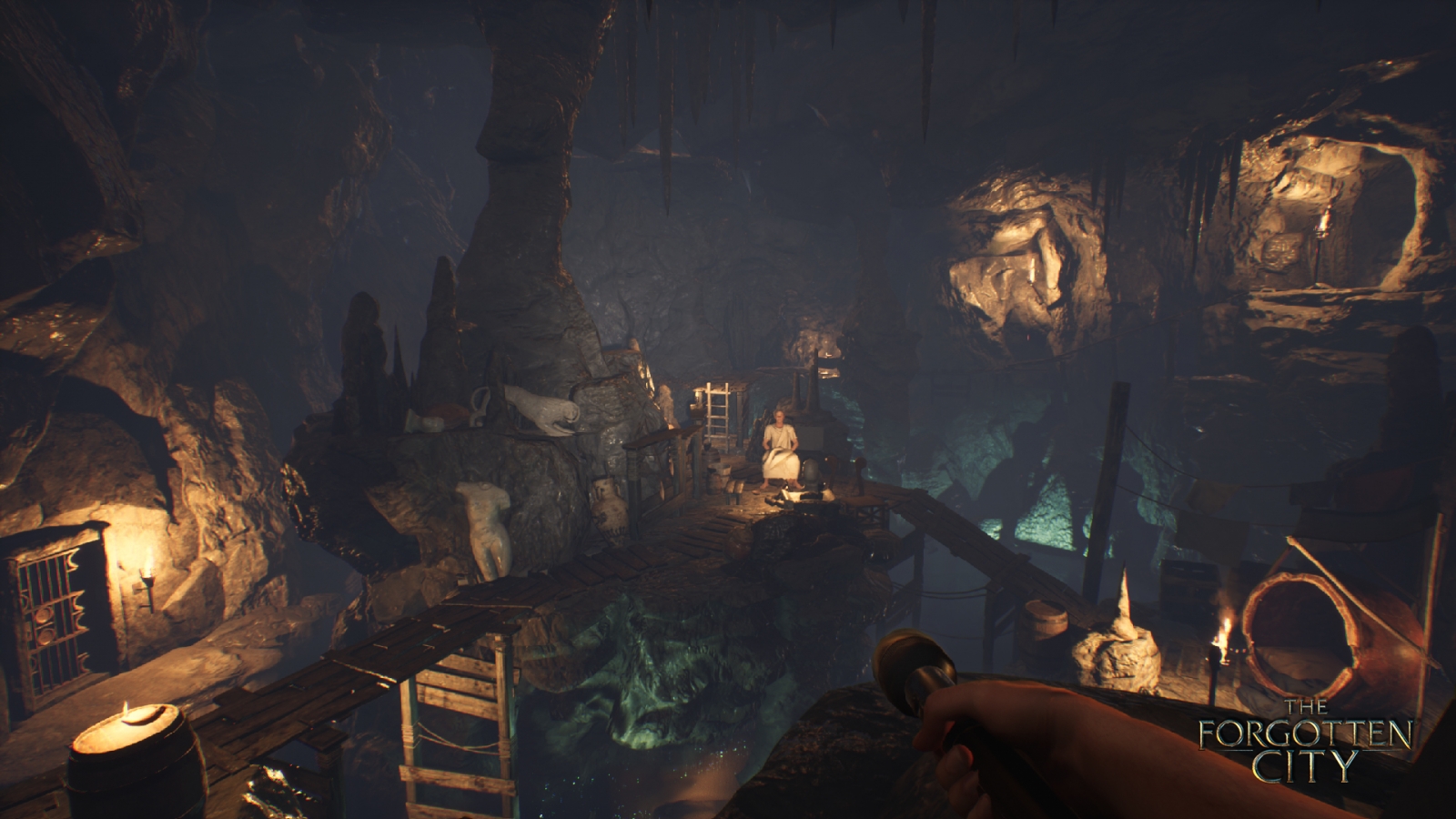 We love video games because we can escape our everyday lives and play in a world where, in the end, we control our destiny. Many of the biggest games we’ve played have decisions that change the way the game plays and ends. Mass Effect has decisions in the first game that change the third game. Knights of the Old Republic has decisions that decide which characters live or die, become a hero or villain. The Forgotten Kingdom amps up your choices by making you responsible for not only your choices, but the choices of the other city dwellers. One wrong move from anyone, could spell doom for all.

I should start by saying that I never played the mod this game is based on, going in completely blind; other than a teaser trailer explaining the premise. “Travel 2,000 years into the past and relive the final days of a cursed Roman city, where if one person sins, everyone dies.” I went in expecting a “who-done-it” mystery game in a room of a city trying to figure out if it was Professor Plum or Ms. Peacock. However, what I was treated to was a fully thought out underground city where every conversation and character matters in the end. I *highly* recommend going into this game like I did for the full experience.

From the very first conversation, you can feel the air of mystery surrounding you. Beginning in the present day, you meet a young woman on the bank of a river, and she asks for your help finding her friend Al who went into the ruins ahead of you. A few minutes later, you make a Stargate-esque jump 2,000 years into the past. When you arrive, you meet the lovable Galerius. You meet him over and over again in fact. This game asks you to “Unravel the mystery at the city’s heart by exploiting its deadly time loop, questioning locals, exploring, and solving puzzles.” Galerius is always your introduction into the city and is always willing to help, even if he thinks you’re mad. With every character you meet, you unlock more and more of the story and with every quest you complete, you’re closer and closer to solving the mystery. I loved every twist and turn this game took me on. I’ve played a lot of endings that never pay off from the work you’ve done. However, this game has an amazing payoff that definitely makes you feel like you accomplished something grand. 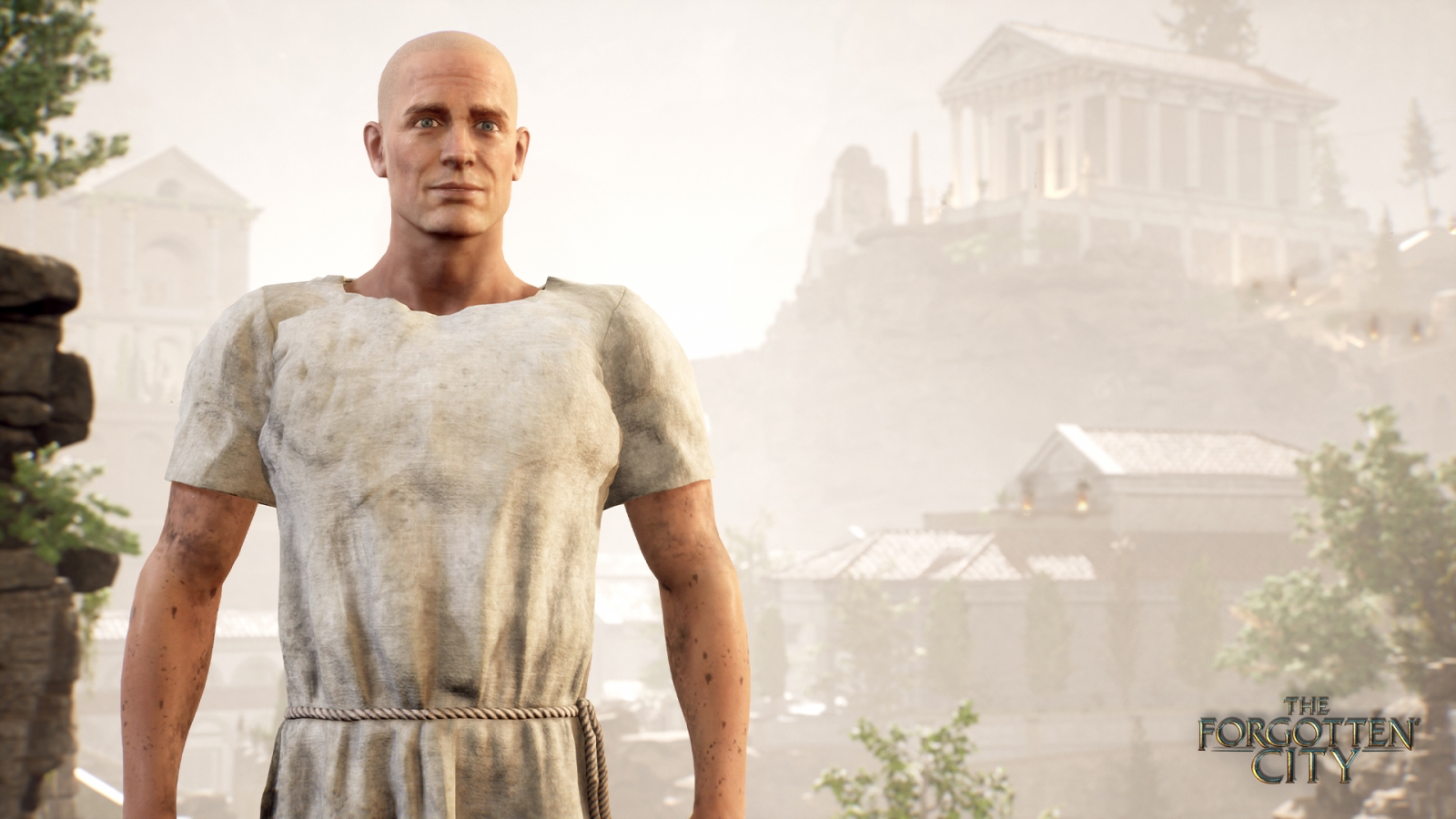 The lovable Galerius greets you again!

One of the coolest parts of The Forgotten City is The Golden Rule. If sin means the end for all, what is sin? Who says what is right and what is wrong? These questions are played out throughout the game, and it makes you think about morality as a concept. It was a very thought out aspect and added plenty of depth to the game as a whole.

There were some game flow additions I wasn’t expecting throughout the game that also added to the enjoyment. For example, the follow feature was a welcome addition. Simply press X (for PS5/PS4 users) and your character automatically follows the specific character for that quest. It allowed me to look around at the beautiful surroundings while still following the character and not getting lost or accidentally falling off something. Additionally, the inclusion of a rumble feature added to quite a few tense moments throughout the story. There were actually times that I would get jump scared more than I would in a horror-based game. The game also lends itself to those “loot goblin” gamers with an ability to find clues everywhere in the city. Every conversation, every house, and every sound might be a clue to helping you figure out who’s about to break “The Golden Rule.” Finally, my OCD came in handy! I also appreciated the credits including the headshots of all the actors and staff, nice touch. Side note — on the PS5, load times were almost non-existent.

While my experience was mostly positive, there were a couple times I had to reload to an old save due to a character being stuck in the ground, unable to get to the necessary location. There were also some issues with the character models’ mouths not syncing with the words. Luckily, the studio is already aware of some of the bugs and they should be fixed by launch!

The environment was so full of life and I never felt like I was tired of exploring the city. I actually could have beaten the game faster if I hadn’t been so interested in exploring and getting myself lost! The cisterns to the villa’s, each part feels unique yet cohesive. It was a lot of fun exploring the city, trying to find secrets in each and every corner. Additionally, each character adds so much to the environment. One thing I loved about this was sitting in the main area and hearing conversations being had between the different citizens. Coming from a mod to a fully fledged game, I was surprised by the level of polish this game showcased. There were a small amount of lighting issues, but that is another thing the studio is already aware of and will hopefully have fixed by launch. 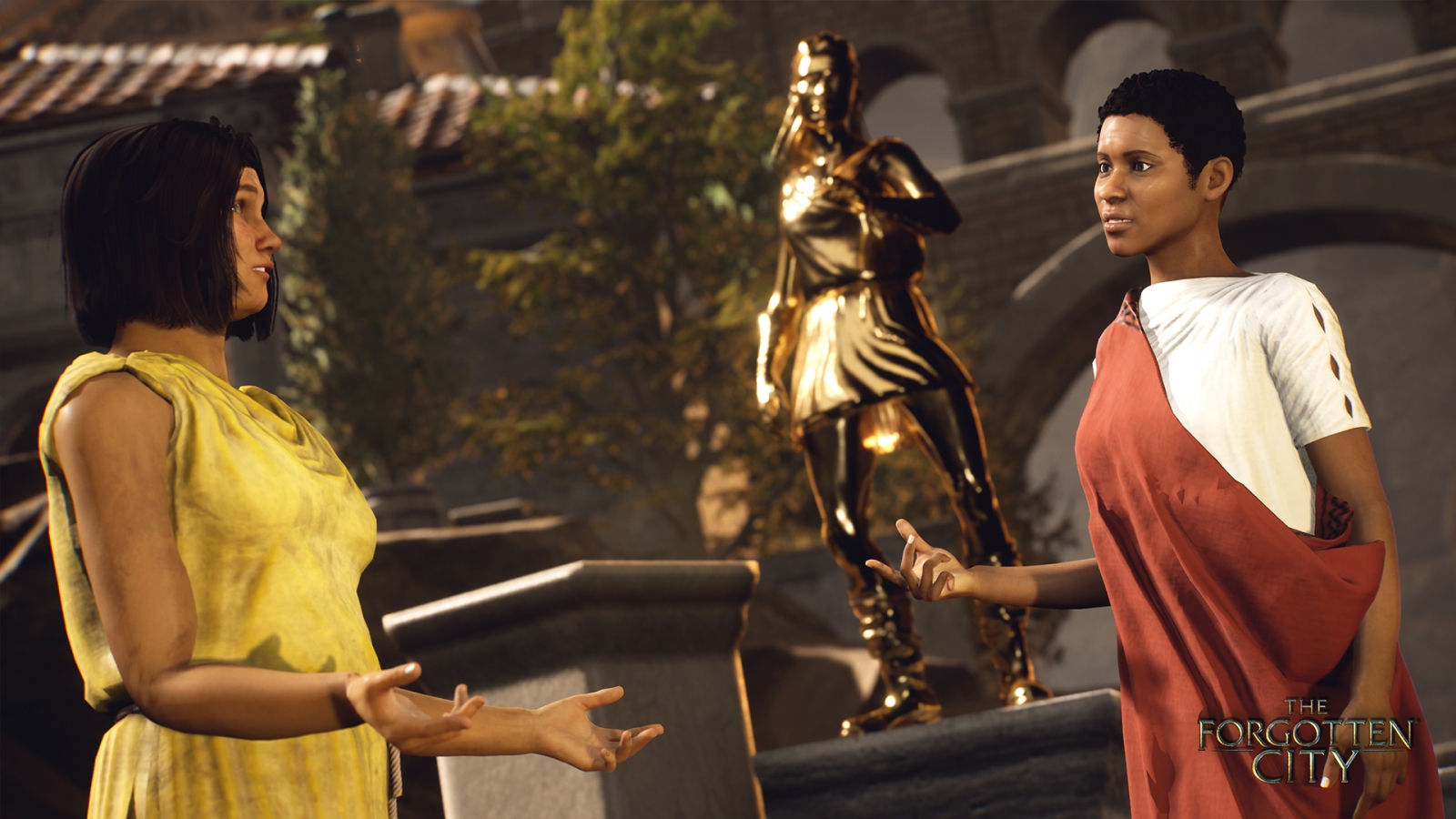 Who knows what you might learn just by listening to the conversations in the main square.

There were only a few times I got truly lost. However, each time it was because either I wasn’t thinking big enough or I wasn’t being patient. The game does a good job of helping you along if you’re stuck with a “butterfly system,” but I only really had to use it a few times. At a certain point, you start to know where the parts of the city are and can rush there quickly when necessary.

Another piece to this puzzle of a game is the music. The soundtrack from top to bottom is immersive and adds so much to the story. From making tense moments even more tense, to making sweet moments ever more sweeter; the music “knew the assignment” and did it well. There is one song specifically, which those who get to *removed due to spoiler* will know, that made me tear up like a baby. Kudos to the music department for a job VERY well done. 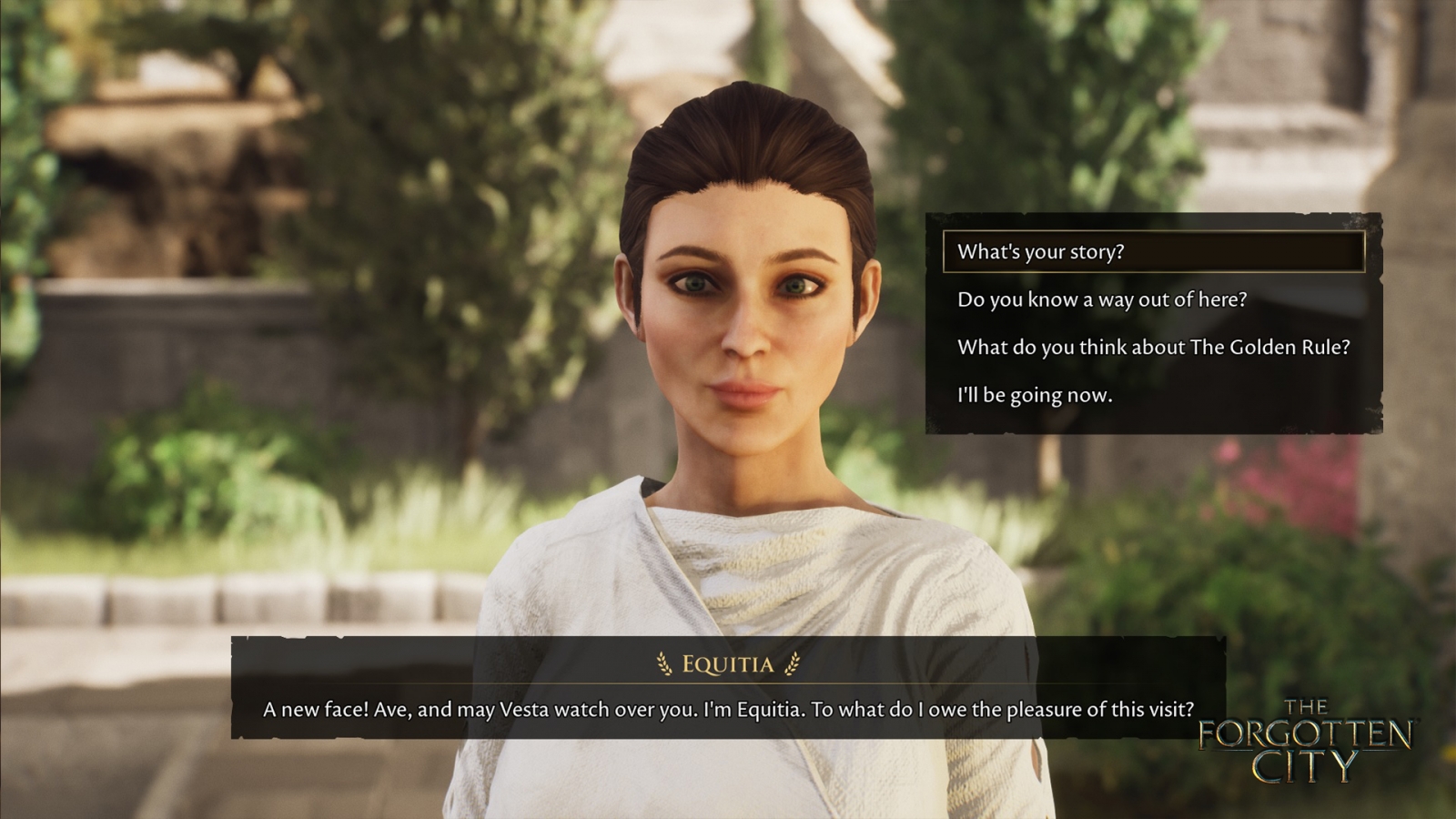 Every character has a story to tell, all you have to do is listen! It was impressive how much time was put into making each character matter.

Replayability won’t be an issue since there are four different endings you can get for the game. I got ending number four in my first playthrough and two in my second. Each one had a completely different tone. One had me creeped out to the max while the other had me sobbing. Without giving anything away, you’ll want to play through each ending to see which one you like the best. Plus, for those trophy hunters, each ending gives you a trophy.

This was truly one of the most engaging narrative games I’ve played in a long time. From the unique characters to the exciting “action” scenes, I couldn’t put the controller down. At the price of the game, it’s well worth picking it up.

A masterclass in narrative driven storytelling. Every character is important and every choice could lead to your doom. Play it and see if you can solve the mystery for yourself!

Adam is a musician and gamer who loves his partner in crime, Regan, and their two pets Rey and Finn. Adam is a fan of Star Wars, NFL Football, and gaming in general. Follow Adam on Twitter @TheRexTano.
Related Articles: The Forgotten City
Share
Tweet
Share
Submit