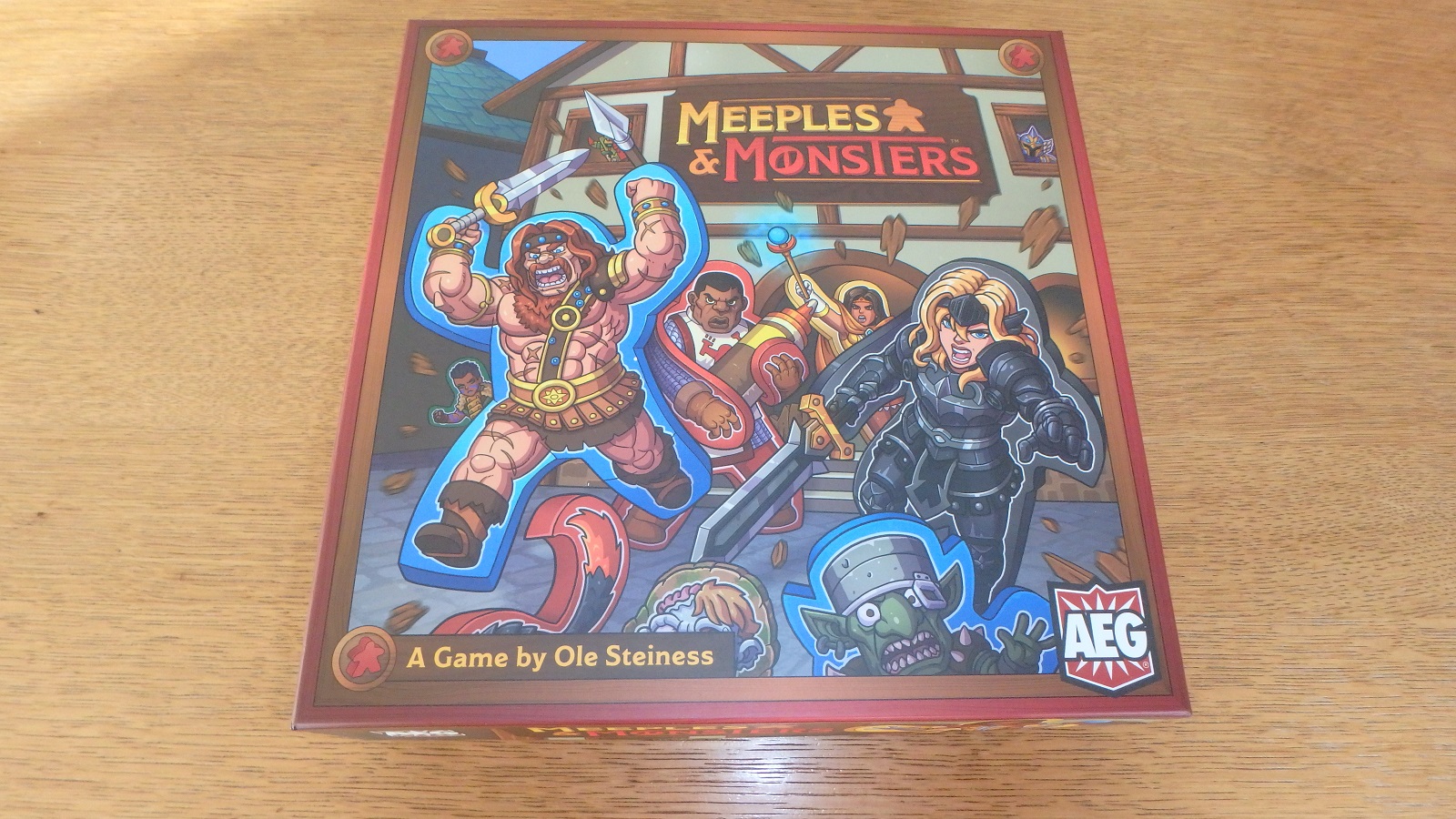 Recently, there has been a massive increase in both the number and quality of introductory board games. From Quacks of Quedlinburg, to My City, to Pan Am, there is a glut of games out there that I can put in front of my non-gamer friends and family that we will all enjoy, and I could not be more happy about that. Meeples & Monsters is AEG’s latest entry into the contest, and not to spoil anything, but I don’t think it quite cuts the mustard for me.

Meeples & Monsters is a bag building game with worker placement elements. Over the course of a game, players will be adding different colored meeples to their bag, and pulling a set number each turn. They can use these meeples to activate worker placement spots on the board, and eventually defeat monsters and complete quests to gain victory points. Uniquely, players go through all the steps of placement and resolution by themselves, leaving a clear board for the player after them. This serves to simultaneously make the game a lot more friendly but also make it feel a lot more like a pure deck builder with a board thrown in for good measure, but more on that later. 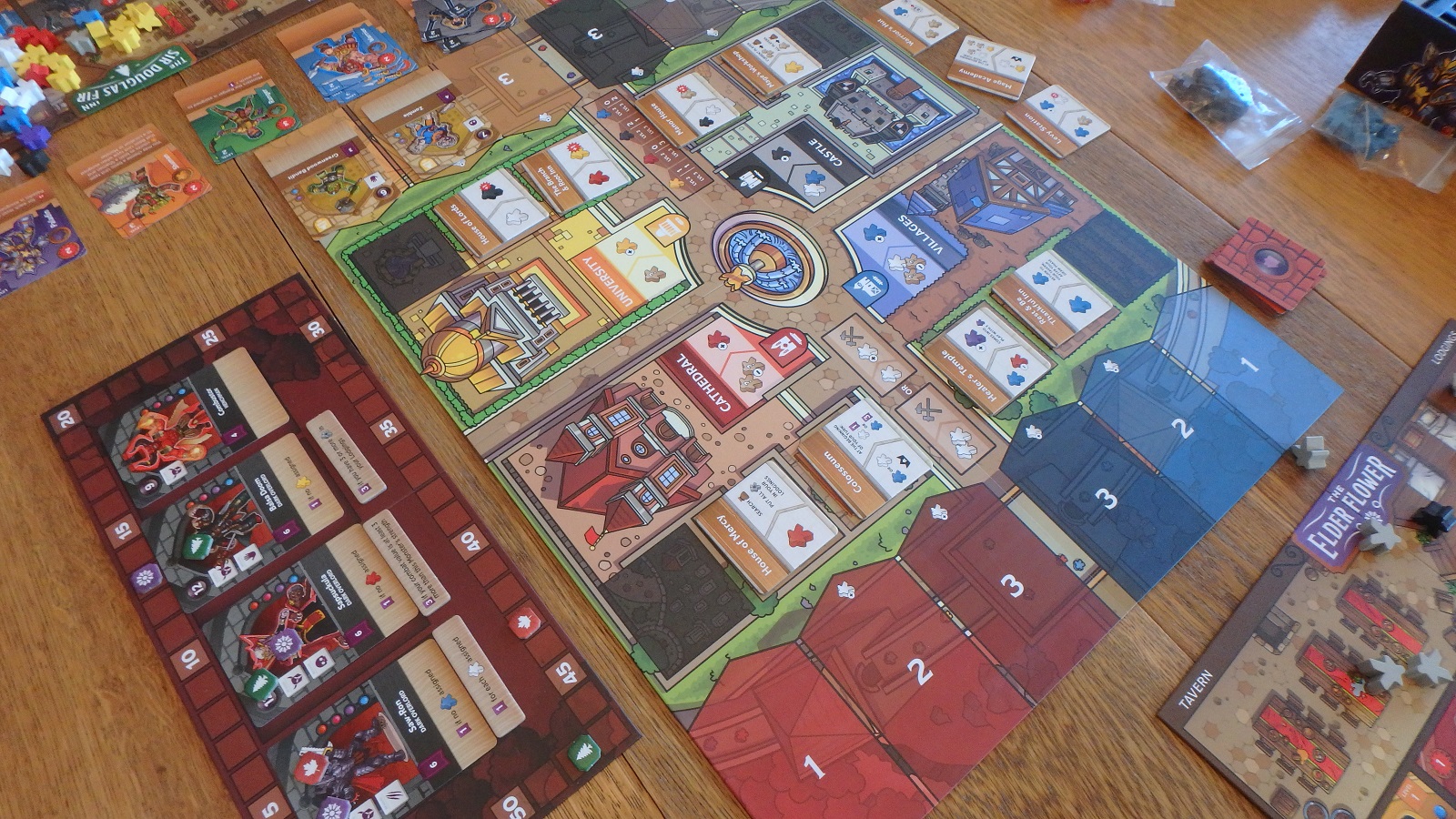 Right out of the gates, Meeples & Monsters trips over itself with its rulebook. I’m generally willing to be forgiving of a less than polished rulebook, but there’s a lot here that feels like it could have used some proofing. For example, the game’s monster cards go from level one through four. Literally nowhere in the rulebook is there a visual breakdown of a monster card or even a written explanation of monster levels; I’ve simply assumed that it correlates with the number of circles on the right-hand side of the card. While this is certainly the most glaring case of poorly-crafted rules, it is hardly alone. All this is compounded by a worryingly prevalent issue- while Meeples & Monsters’ iconography is generally straightforward, there are multiple instances where the same icon means different things in different places. It’s really a shame, because this game is doing some really innovative and unique stuff that makes deck/bag building games much more beginner-friendly.

For those unfamiliar with the genre, it’s defined by its combos. Finding how certain mechanics interact and building an engine around your favorite combinations is what makes these games click, but can lead to gameplay where those that are less adept at identifying effective pathways are left in the dust by quicker players. Meeples & Monsters eschews this by having the most combolicious parts on the communal game board, and giving each player their own crack at it. Don’t get me wrong, players will still have their own personal bag, upgrades, and monster/quest rewards, but aside from the rewards, everything can be aped if players are paying attention and notice someone else doing well.

Of course, they may just follow in another player’s footsteps completely unintentionally, because there is so little decision space in this game. Once the board is completely built there will be a total of fifteen worker placement spaces, including the six monster cards players can assign meeples to fight. That number is deceptive though, because there’s a bevy of mechanics narrowing viable options. First, and most obvious, monsters’ strength values have to be met or exceeded to be defeated, immediately removing monsters that your drawn meeples can’t defeat from the equation. Then you have to factor in spaces that either you don’t have the right color meeple for, or spaces that are obviously inefficient (I’m not going to activate the space that gives all my yellow meeples plus one combat if I don’t have any yellow meeples). Finally, if an area of the board has more than one monster, each action you take in that area will give you one or two of the mediocre white meeples, diluting your bag. After you take all those restrictions into account and place meeples in places that are obviously good to the point of necessity, then you’re only left with a handful of viable decisions, if any. 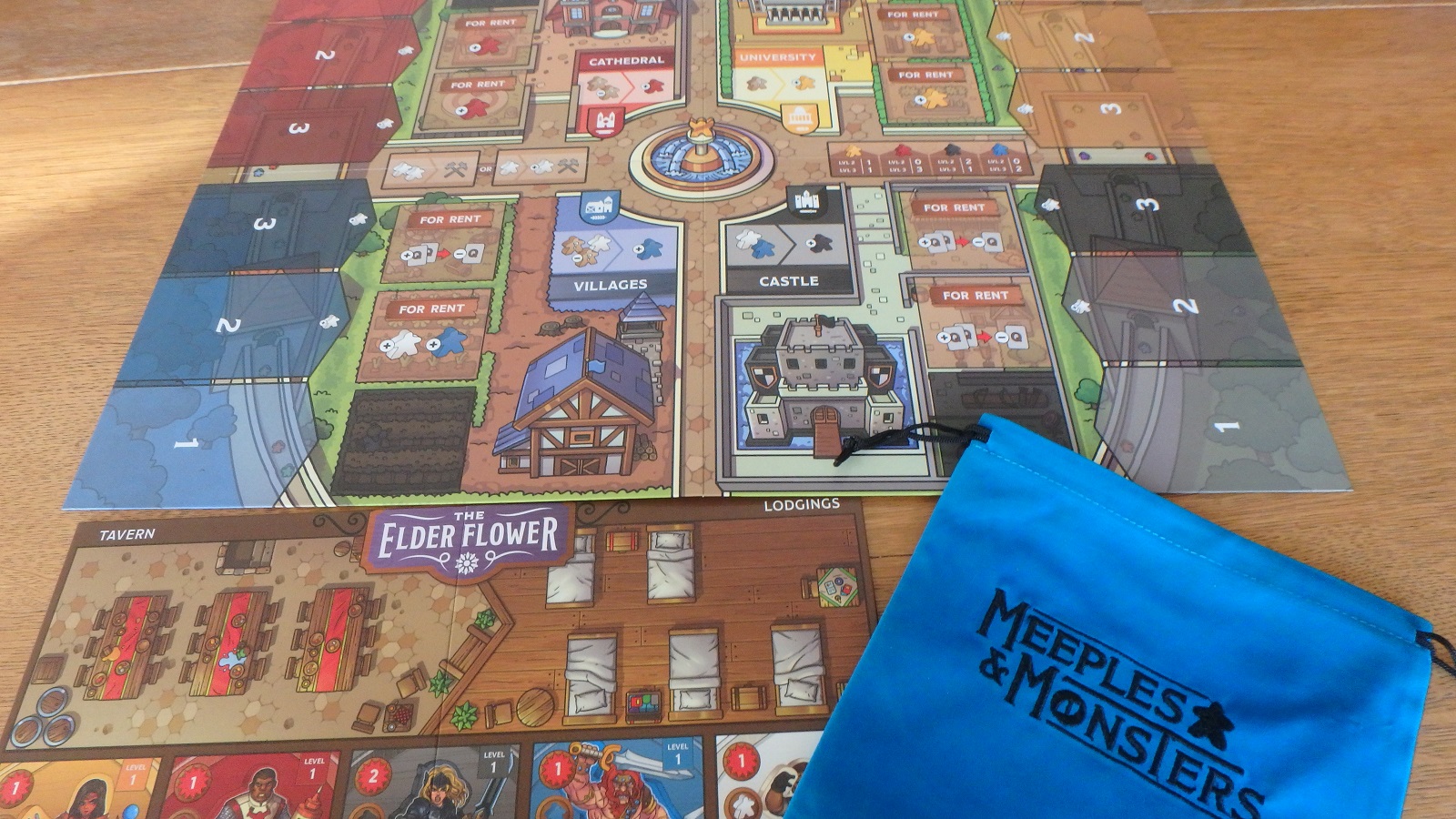 Not that I dislike simpler games; a nice filler Love Letter between heavier games can serve as a nice palate cleanser, but Meeples & Monsters severely overstays its welcome. The monster deck is this game’s timer, and honestly, it should have been half the size. If setup puts a bunch of monsters in the areas to get the blue or black meeples that are good at fighting, it’s gonna take a while for players to get their monster fighting engines going. Considering the speed that quicker players will take their turns at, just one player with analysis paralysis will grind Meeples & Monsters to a halt. When I put this in front of my parents, between my dad’s AP and the blue sector being full of monsters, it took us almost three hours to get through a game with the substance for thirty minutes worth of game. I felt like I was trying to swim laps in a kiddie pool, or turn a bag of gummies into a full meal.

To be fair, I know I’m not the target audience for this game. The chunky, children’s mobile game style artwork put me off, but my in-game family found it welcoming and unintimidating. The oversized velvet bags felt absurd for my thin pool of meeples, but are appropriately sized for the pound that players that don’t care about accumulating whites will wind up with. Thinking about it, of course I don’t like Candyland, I’m not a small child, and similarly, I don’t love Meeples & Monsters, I’ve been playing hobby games for going on a decade now. But my family hasn’t, and they quite enjoyed it; never got that dejected look they sometimes get when I try to put a heavier game in front of them. So I’m happy that they have another game that they like, it’s important to remember that not every game has to be a complex puzzle.

While Meeples & Monsters succeeds in being a welcoming introductory bag builder that is simple enough to keep beginners from being overwhelmed, it also fails at providing a good experience for seasoned gamers. Combined with a less than stellar rulebook and a long playtime, I'd steer most hobbyists away from this one, but you'll feel right at home if you're overwhelmed by heavier fare.

Nick grew up reading fantasy novels and board game rules for fun, so he accepted he was a dork at an early age. When he's not busy researching the intricacies of a hobby he'll never pick up, Nick can be caught attempting to either cook an edible meal or befriend local crows.
Related Articles: Meeples & Monsters, Tabletop
Share
Tweet
Share
Submit