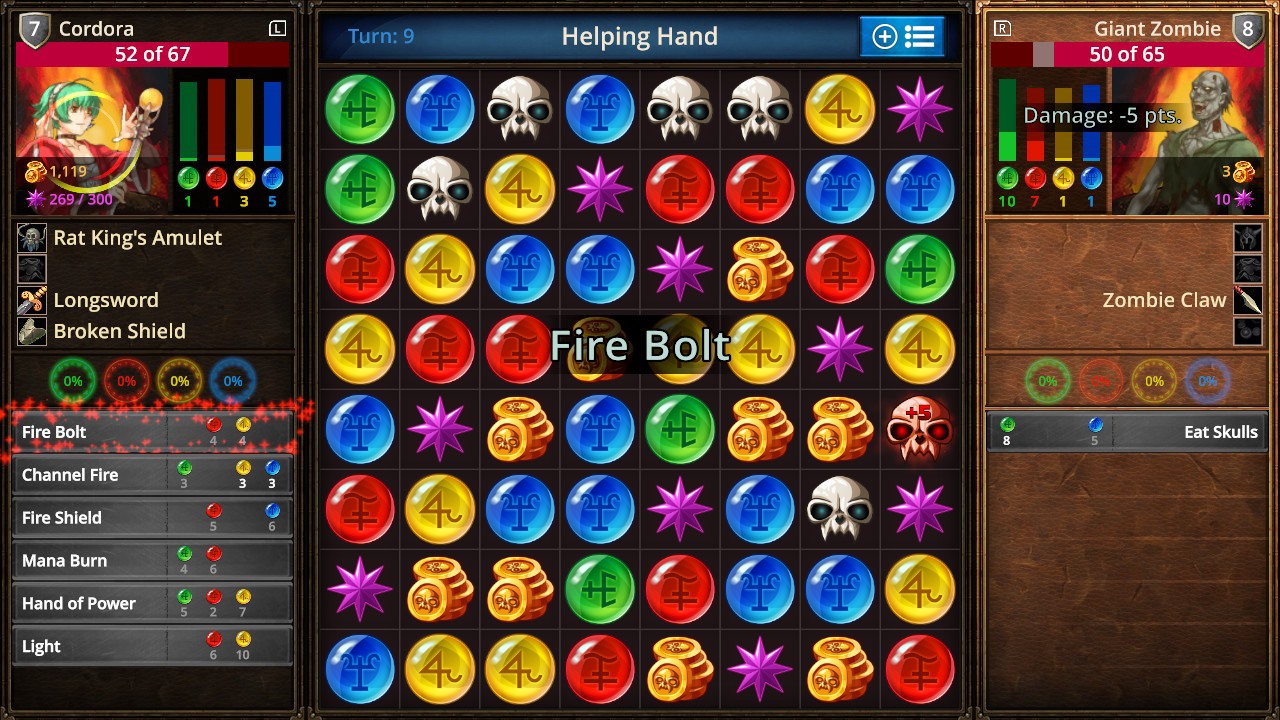 When Puzzle Quest: Challenge of the Warlords was released on the Nintendo DS in 2007 (a date that makes me suddenly feel very tired), it was praised for its innovative meshing of addictive match-3 gameplay and RPG progression. The remastered Puzzle Quest: The Legend Returns still has all the charm of the original, along with tons of new quests, spells, and characters. Unfortunately for Puzzle Quest, and fortunately for puzzle game fans, the genre has moved on since 2007, and things that felt fresh then are now fairly standard. Still, Puzzle Quest: The Legend Returns is just as addictive as ever, even if it now paradoxically feels a little derivative of the games its original version helped to inspire.

Even if you didn’t spend as much time as I did so engrossed in playing Puzzle Quest on the bus that I frequently missed my stop, the concept is easy to grasp. It’s a match-3 game (think Candy Crush or Bejeweled) that’s about as standard as they come, but with the addition of character classes and a full RPG campaign to prop it up. At the beginning of the game, you choose a character with its own suite of unlockable spells, then set out to confront the threats plaguing your generic fantasy homeland. What sets it apart from most RPGs is that battles take the form of gem-matching puzzles. As you match tiles, you either gain experience points, coins, or mana to cast spells, or just deal damage to your enemy. You’ll occasionally get a choice in how to resolve a quest, such as choosing between escorting an unwilling noblewoman to her forced marriage with a neighboring ruler or not being an absolute monster and taking her to safety instead. 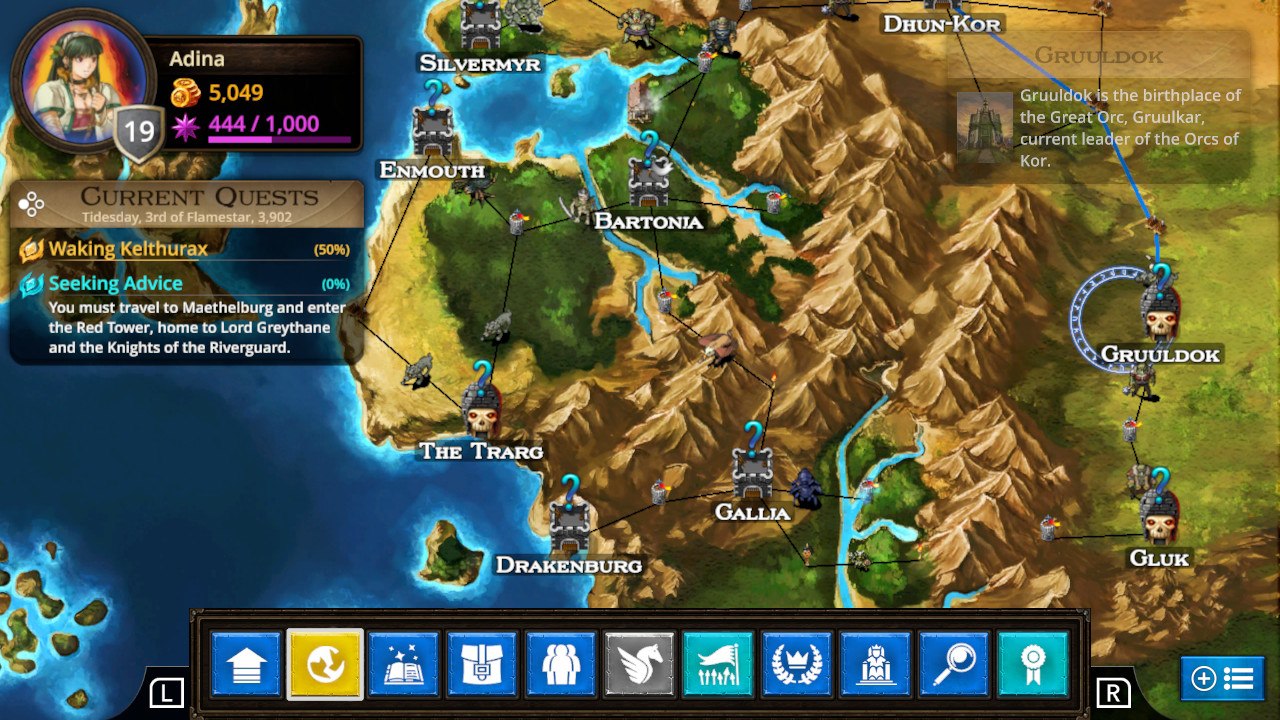 The bulk of the game, the match-3 puzzle combat, plays out as simply as you’d expect. There is more strategy here than in standard games in the genre, since you’re constantly prioritizing whether you should go for direct damage, store mana for your best spells, or even take gems you don’t need just to keep your enemy from charging their attacks. Matching more than three gems in a row will also grant you an extra turn.

At times, the puzzle and RPG sides of the game feel at war with each other. The inherent randomness of a match-3 puzzle game makes it tough to strategize as you generally would in an RPG, and if you’re not lucky enough to get the gems you need on the board, there’s really nothing you can do about it. If you don’t draw skulls (used to attack) or gems for offensive spells, you can get stuck making matches that don’t benefit you at all turn after turn.It’s also hard not to get frustrated when you run out of possible matches, which resets the board and drains all of your mana, or when your enemy just happens to get nine free turns in a row, cutting your health in half and filling its mana reserves in one go. 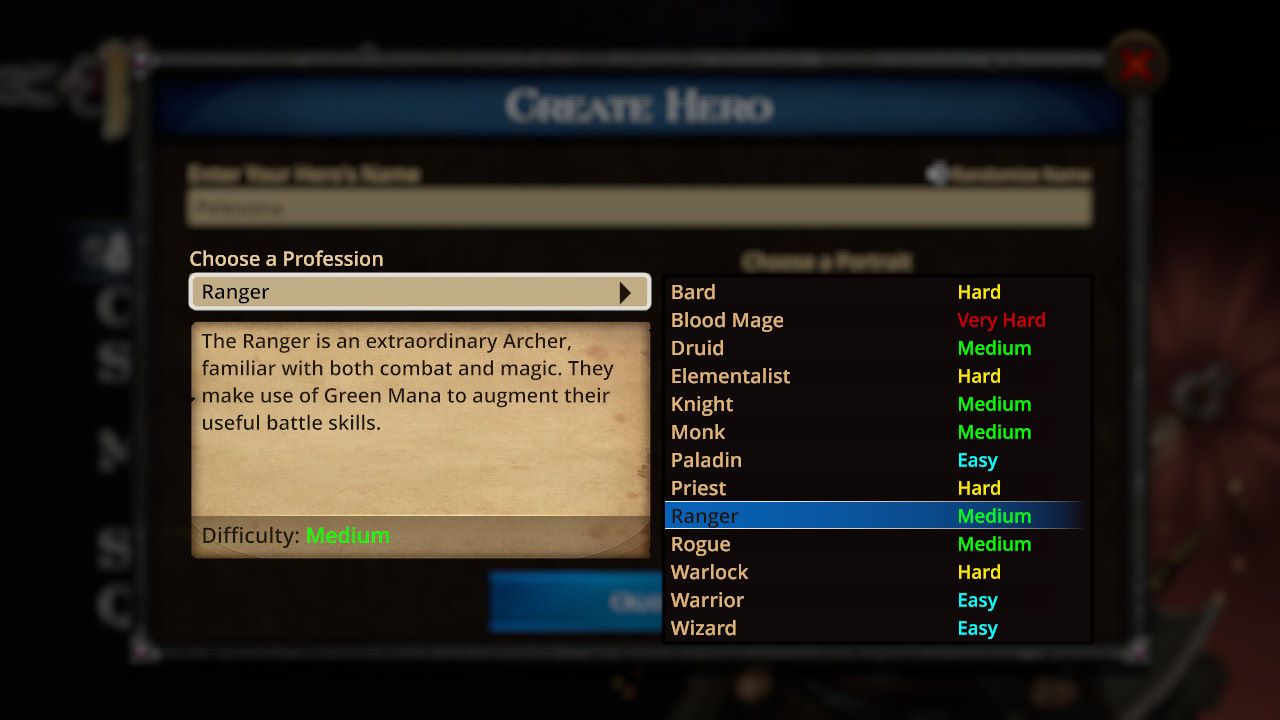 Unfortunately, that basic dynamic never evolves. A lot of match-3 games will shake things up by changing the shape of the board or adding locked tiles, but Puzzle Quest sticks with a standard grid and follows the same basic formula start to finish, outside of optional puzzles to capture enemies where you’re tasked with clearing a set configuration of gems. The only twist comes from your spells, which can do anything from heal your character to change the color of gems on the board.

Puzzle Quest is a long journey, and it’s most fun when it hits its stride in the mid-game. When you’re gaining spells regularly, either through leveling up or learning them from captured enemies (in one of the interesting twists you can access by building out your customizable citadel), regularly swapping out gear, and recruiting new sidekicks that provide combat bonuses, it’s easy to overlook the simplistic core gameplay. Early on, though, you just don’t have enough options to mix up your playstyle, and it plays like a standard match-3. At higher levels, when new spells aren’t coming to you as quickly, you’re likely to have settled into a routine that won’t change much unless you decide to swap out your gears and spells just to mix things up. 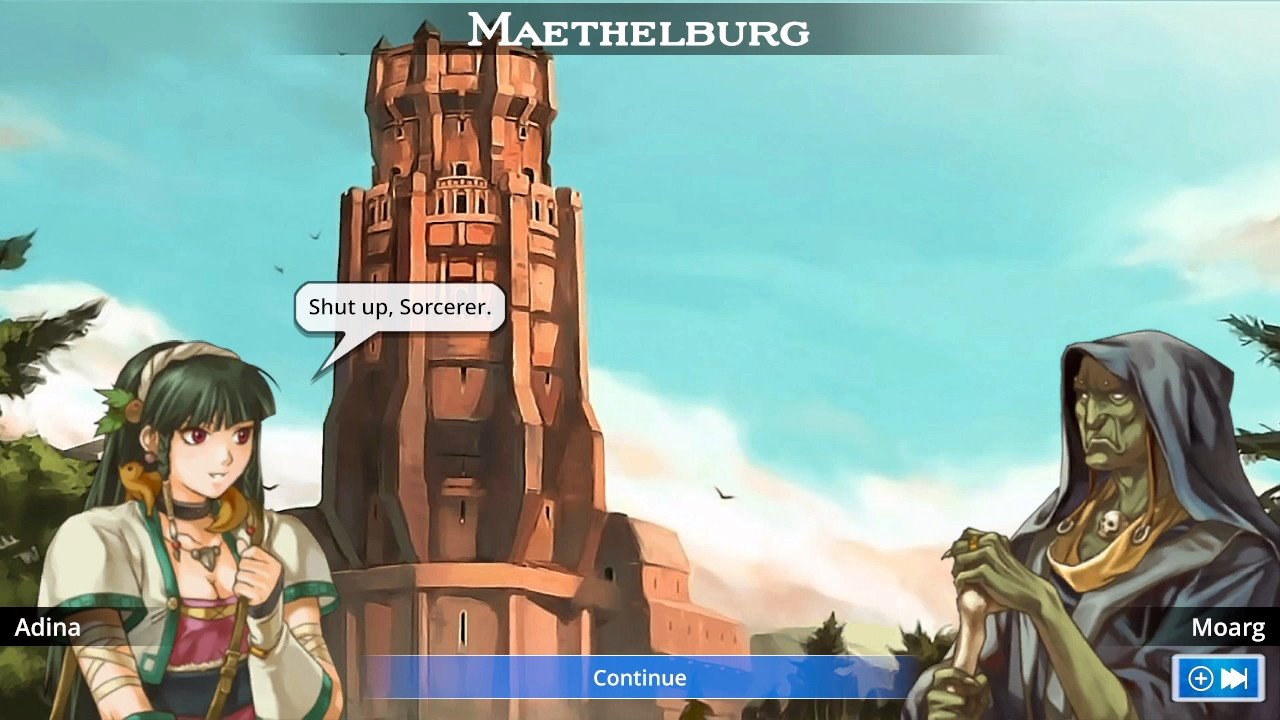 Along the way, you follow a hokey story that you’re probably better off just skipping through to get to the battles. There are some decently funny moments buried throughout the game, but for the most part, the writing is dry and perfunctory, and the story might as well have been written by a random fantasy plot generator. It’s accompanied by some decent remastered character art and a repetitive soundtrack that could have used much more of an update, with its cheap synth version of a medieval fantasy score sounding more like the soundtrack to an ‘80s Conan the Barbarian knock-off than a modern video game.

All in all, Puzzle Quest: The Legend Returns is a solid but safe game, though I expect the nostalgic appeal will make it a better choice for people who played the original than those coming to it for the first time. Still, there’s a lot to like here, even if it does make me wish that developer Infinity Plus 2 had done more to modernize the game or, since we’re firmly in wish-fulfillment territory here, gone for a full sequel.

Puzzle Quest: The Legend Returns is a good combination of addictive puzzle gameplay and RPG character-building. While it will likely play best to fans of the 2007 original, its central mechanics are still fun, if a bit dated. Despite sometimes slow battles that don’t always mesh its puzzle and RPG sides well, Puzzle Quest is still worth a look for fans of puzzle games.

A committed indoor kid, Bryan moved from Pittsburgh to Los Angeles for a prettier landscape to ignore. They can be lured outside with promises of taco trucks and film festivals, and enjoy trawling through used book stores for works on the occult. Bryan has been gaming since the SNES era and is a sucker for good pixel art.
Related Articles: Puzzle Quest: The Legend Returns
Share
Tweet
Share
Submit