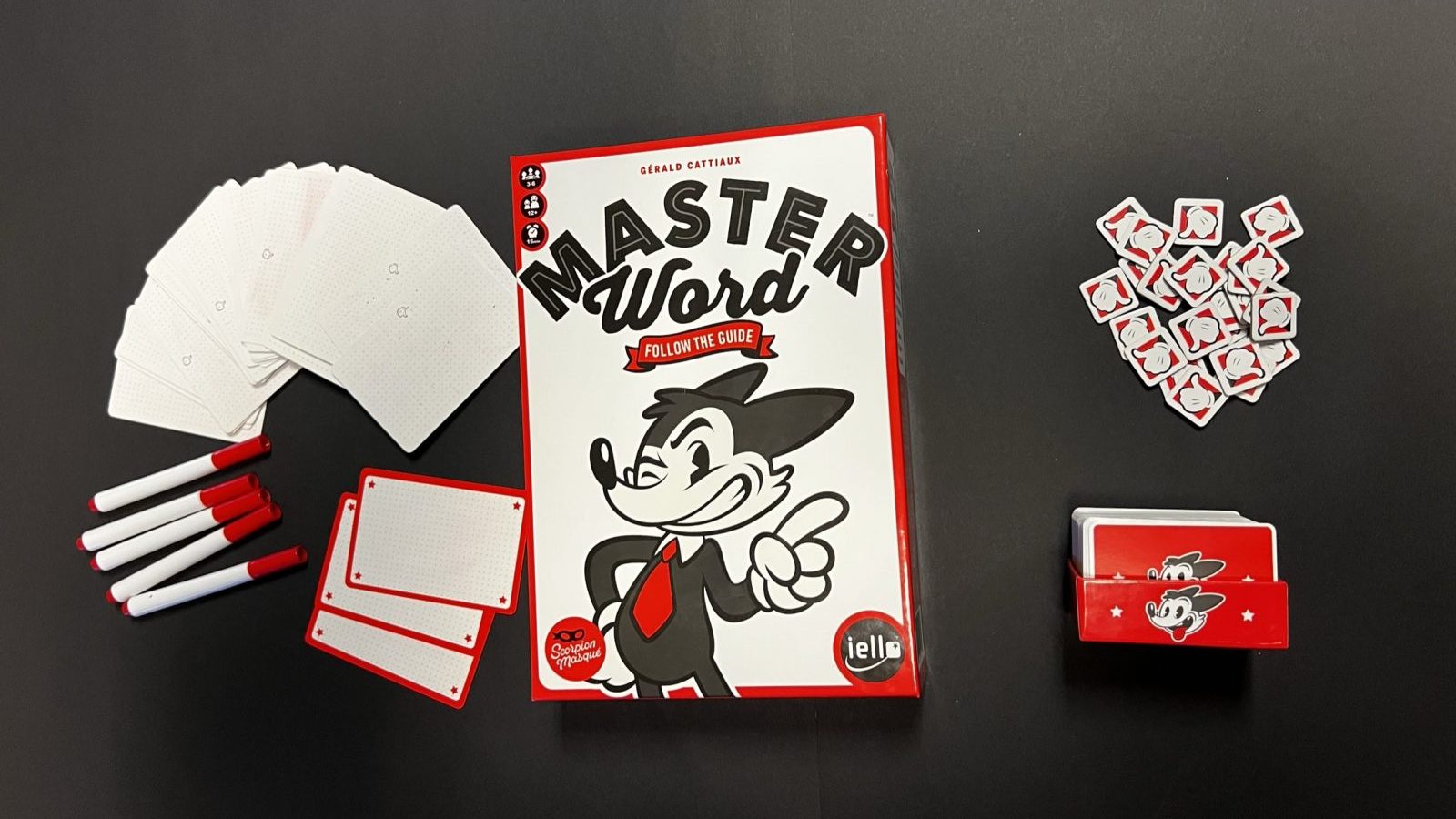 Put forth your queries, use the clues to narrow down choices, make your guesses, and try to decipher the answer before you run out of rounds. You may be thinking of the classic code breaking game Mastermind at this moment, but this review is not about that amazing game. Master Word is a cooperative party game for 3-6 players from designer Gérald Cattiaux and published by IELLO and Quebec based publisher, Le Scorpion Masqué, known for another popular word game, Decrypto. Following in Mastermind’s footsteps, in Master Word, a group of players use clues and guidance to crack the code and guess a hidden word. Guess the word in seven rounds, and the whole group wins. 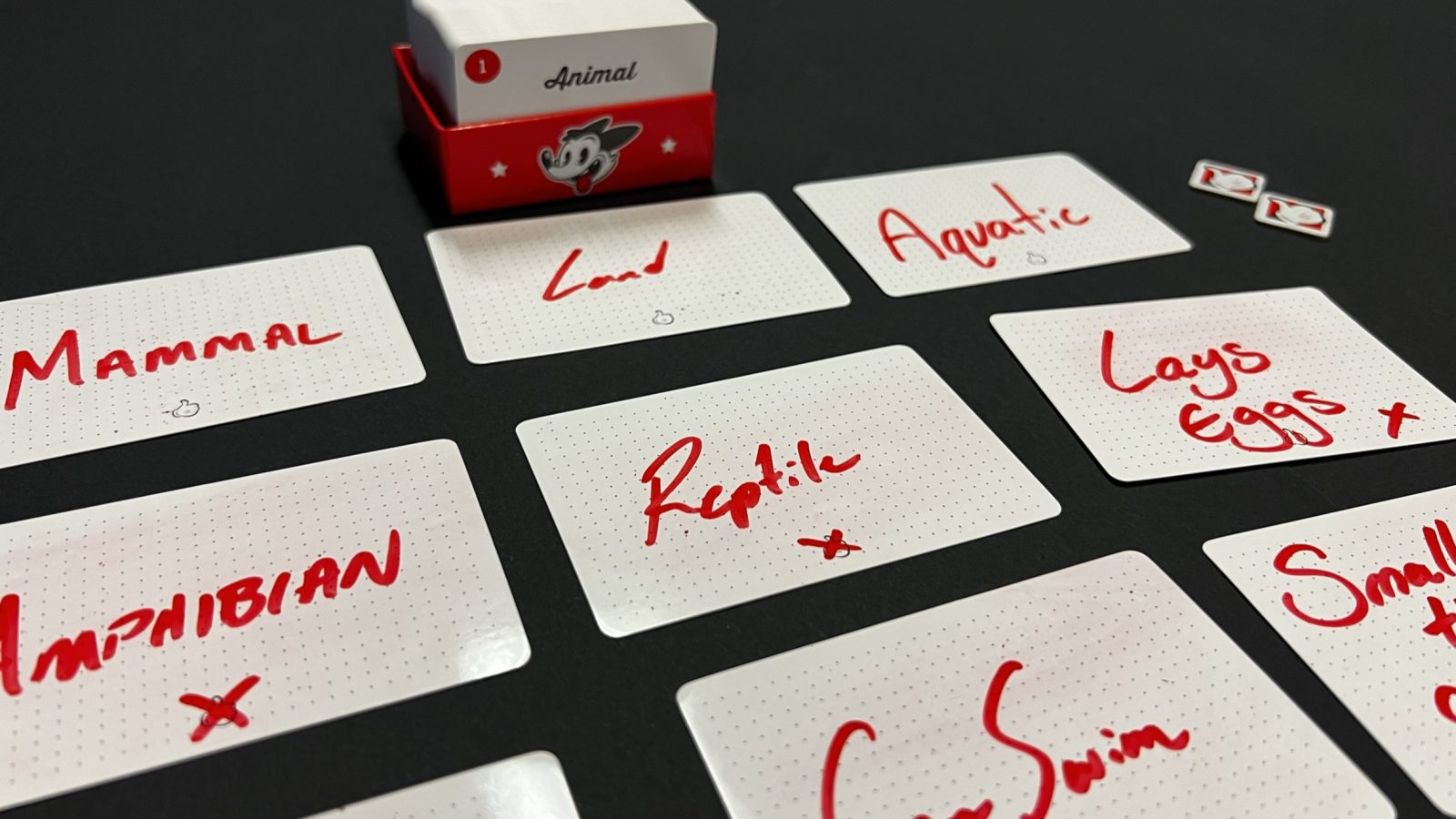 In Master Word, though players are assigned different roles, the group wins or loses as a team. One member of the group is designated as “the guide” and is the only one who knows the master word. The rest of the group are known as “seekers” and are each given six blank cards and a small red marker. Seekers are given one initial clue from the guide and have seven rounds to try and guess the secret word. Each round, the seekers are given 90 seconds to discuss and write descriptions about the secret word on their blank cards. At the end of 90 seconds, the clue giver evaluates the cards, asks clarifying questions, and places a number of thumbs up tokens next to the row of descriptors. These tokens correspond to the number of useful clues written on the cards, but give the seekers no indication on which card they refer to. The seekers then have a new 90 seconds to use this knowledge to make their next round of inferences about the secret word. Throughout the course of seven rounds, the seekers have three opportunities to guess the secret word. If a guessed word is incorrect, thumbs up tokens are placed as normal. Once per game, the guide can place a token directly on one of the written cards to help focus the seekers. If players cannot guess the word correctly by the end of the seventh round, everyone loses. 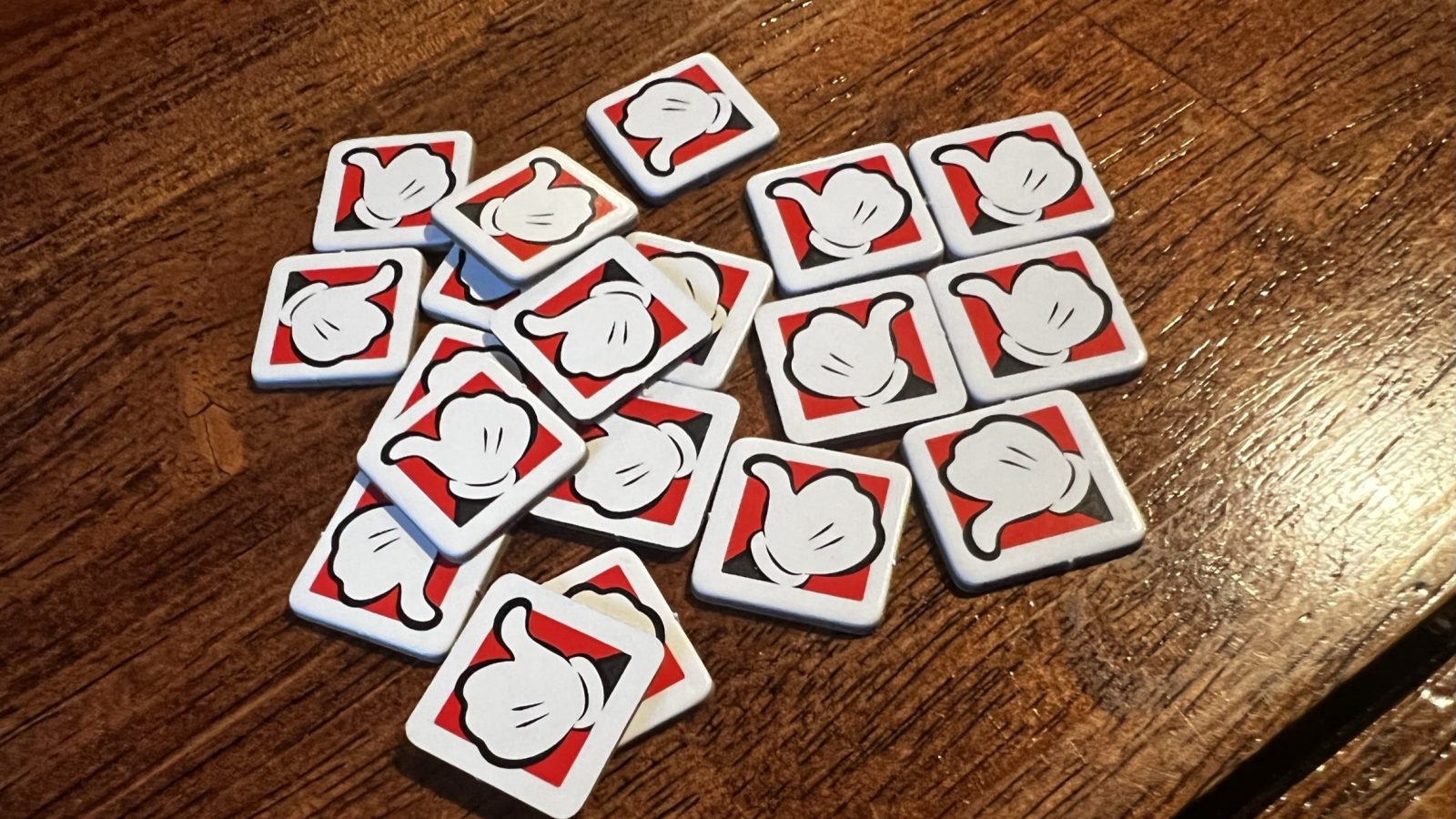 Master Word was a lot of fun to play and offered a fun twist on the code breaking mechanism. Players have to be strategic on what questions they ask each round so as to funnel down and eliminate different choices. When given the initial clue of “animal,” players wouldn’t want to play “predator” and “prey” in the same row. Similarly, if given the clue of “person,” players may not want to put “male” and “female” in the same round. The guide also has to be strategic when using their one-time direct card token. Use the token too early, and it could mislead the group, but use it too late and the group may not have enough rounds to guess the word. The 90 second rounds were long enough for the group to discuss and still provide some urgency for getting clues on the cards. The group I played with found ourselves with time left on the clock in some cases and time running out causing missing cards in others. Playing with a full group gave us plenty of words to offer to the guide, but made it difficult to narrow down when only one token was given and five cards played. 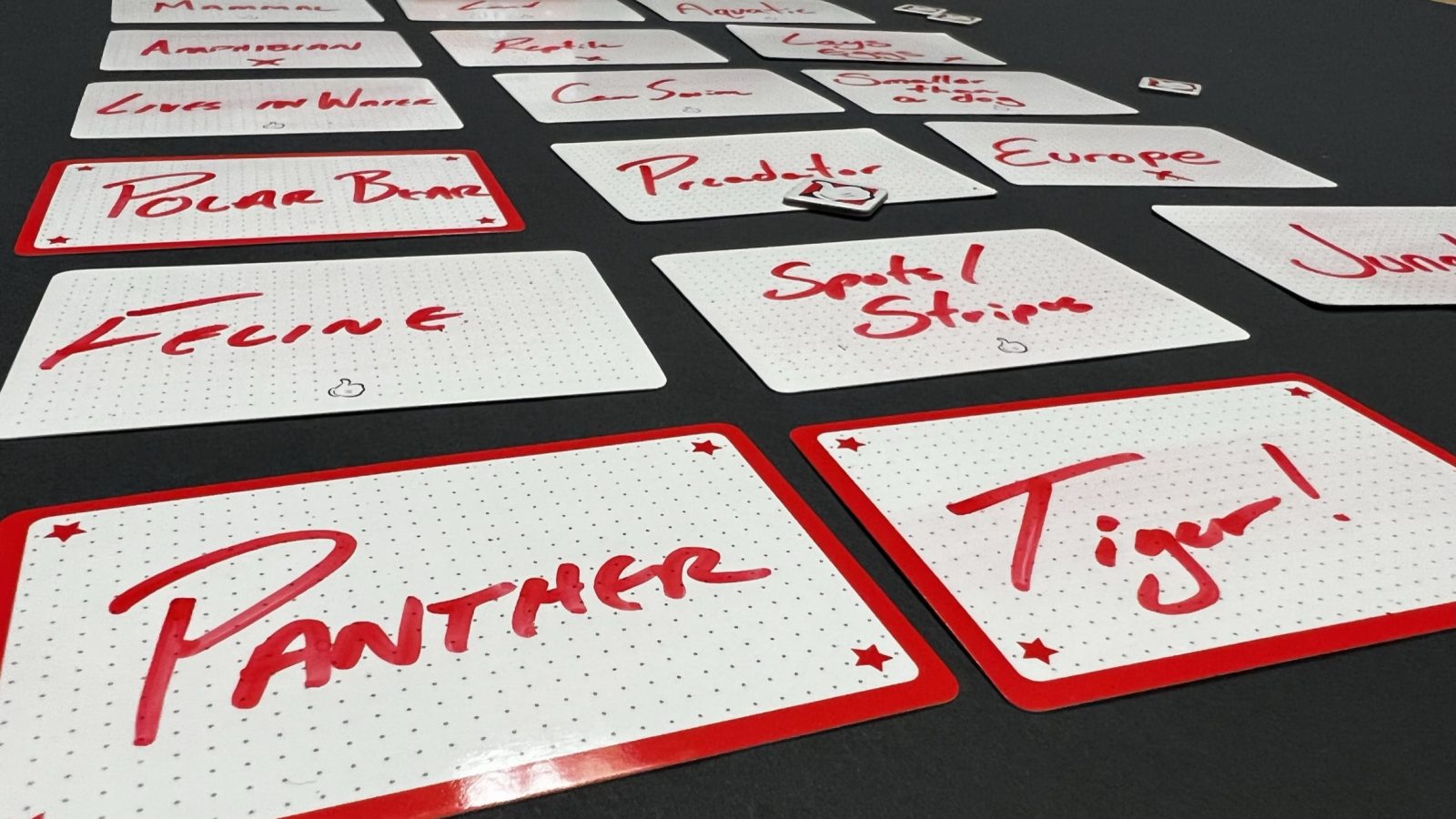 The production quality of the game was good. The color palette of red, black, and white ran throughout the game to pleasant effect and the theming is reminiscent of classic cartoons with many allusions to early Mickey Mouse from the group. The rule book is concise and offers the players a sample round as an example of how each of the steps in the game work. The game comes with 150 two sided cards that get progressively higher as you work through the deck. The creators also included divider cards and a special cardboard marker tile to help keep future cards a secret and set players up for the second side after working through the entire deck. The red markers did leave some residue on the cards and the small eraser pad did little to clean it off. Some of the other drawbacks were having to provide cleaning solution and cloths for the group and the absence of a 90-second timer included in the box. 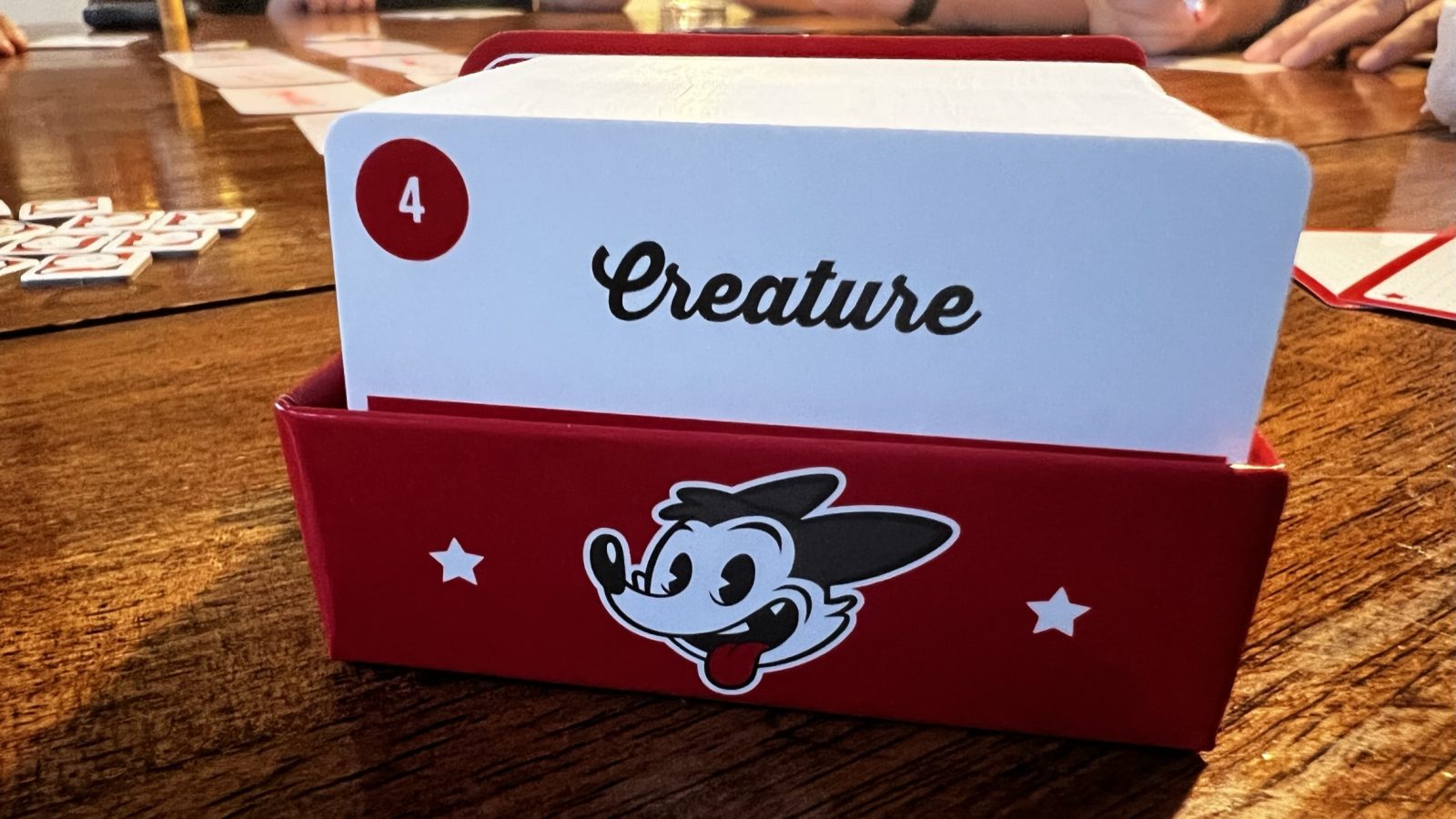 Overall, the game was quick to teach and quite fun to play. The 90 second rounds helps keep the game flowing and makes each game around 15 minutes, allowing for multiple rounds in a sitting. One drawback would be the role of the guide. The only real job of the guide is evaluating the clue cards and asking a couple of clarifying questions. Other than that, they are sitting out of the fun conversations and discussions about what clues to guess next. The 20 questions, code cracking elements are engaging for the players, but as I feel with most party games, they can lose their luster after a few rounds of play.

Master Word is a fun spin on the classic Mastermind code breaking mechanics. A nice party game to start your evening or fill some dead time between other games.