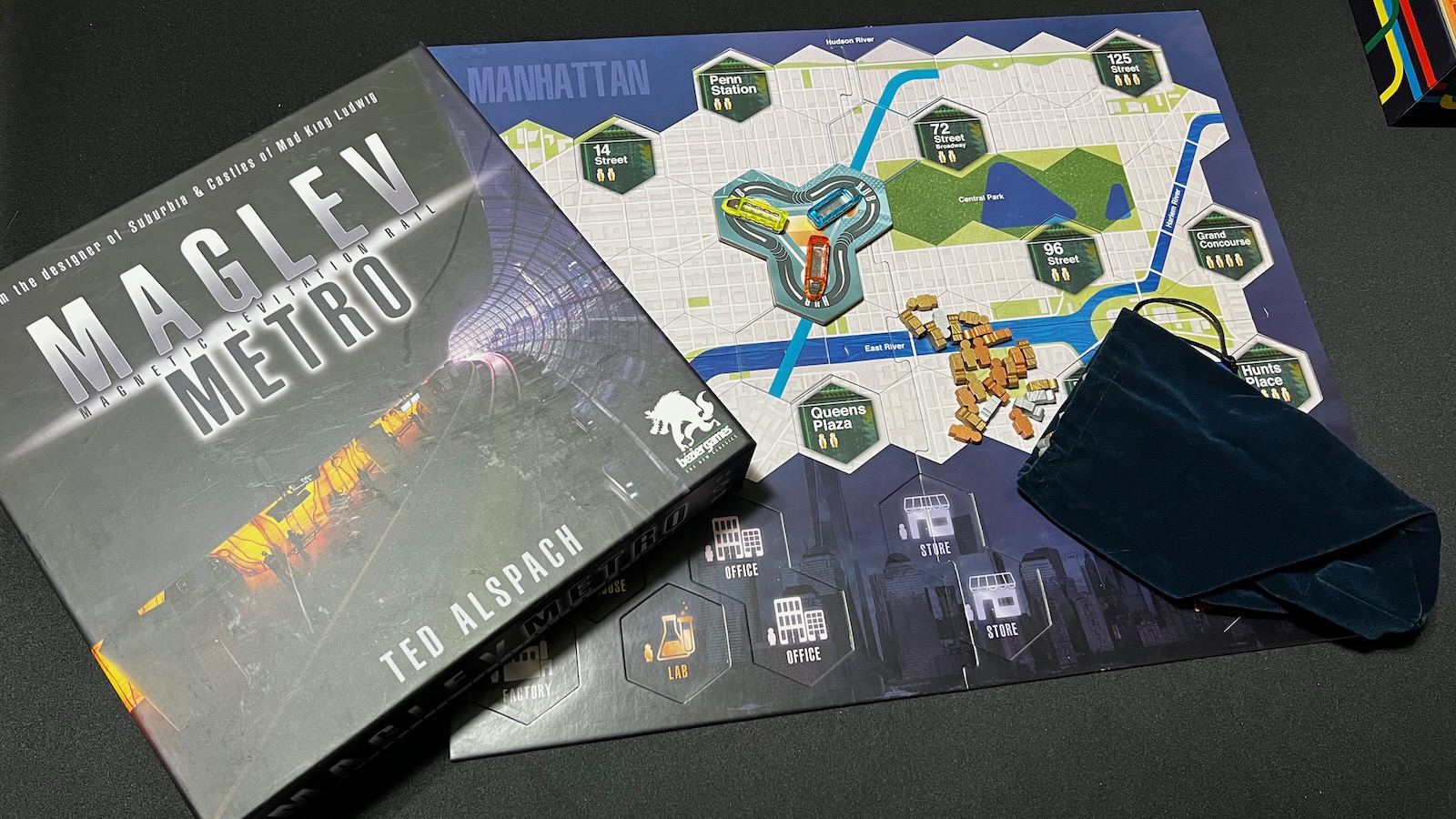 The subway systems of New York and Berlin are in need of replacement and magnetic levitation train technology is the answer. In Maglev Metro, you control one of four different companies building a new rail network to service the patrons of the city. Which company will build the most efficient system? 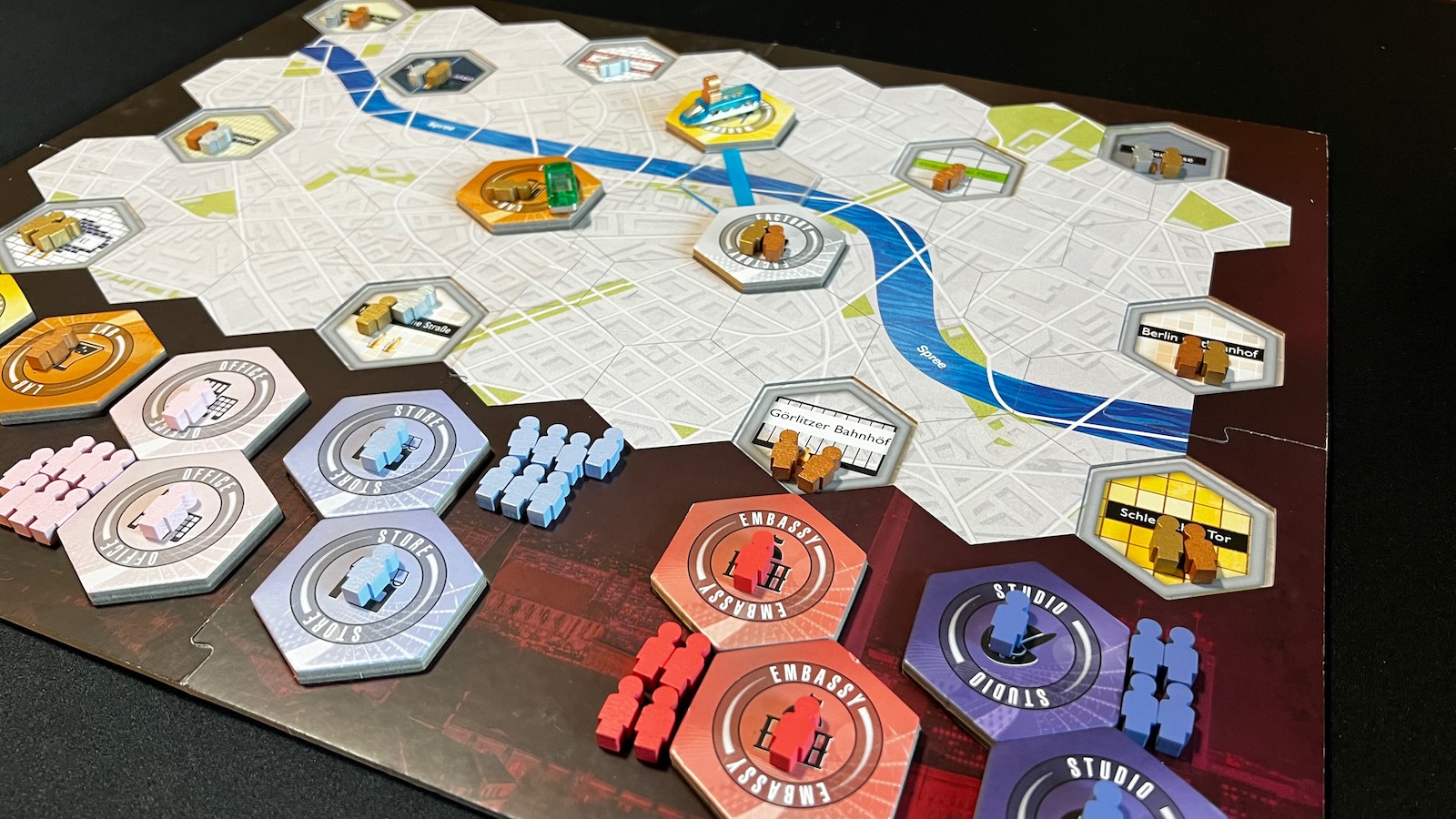 Maglev Metro is a mid-weight pick up and delivery/engine building game where a player’s goal is to have the most points at the end of the game. The way to earn points is building tracks on the map, picking up and delivering robots and passengers to different stations, and fulfilling the goals on a series of cards each player gets at the beginning of the game. On a turn, players can take up to two actions from a list located on their player boards. These actions could be placing new rail tiles or picking up old rails from the end of their lines, moving their trains down the routes, unlocking and building new stations to unlock different passengers and drop off locations, picking up and dropping off these robots and passengers, and even rearranging the robots on their boards that run the player’s engine. 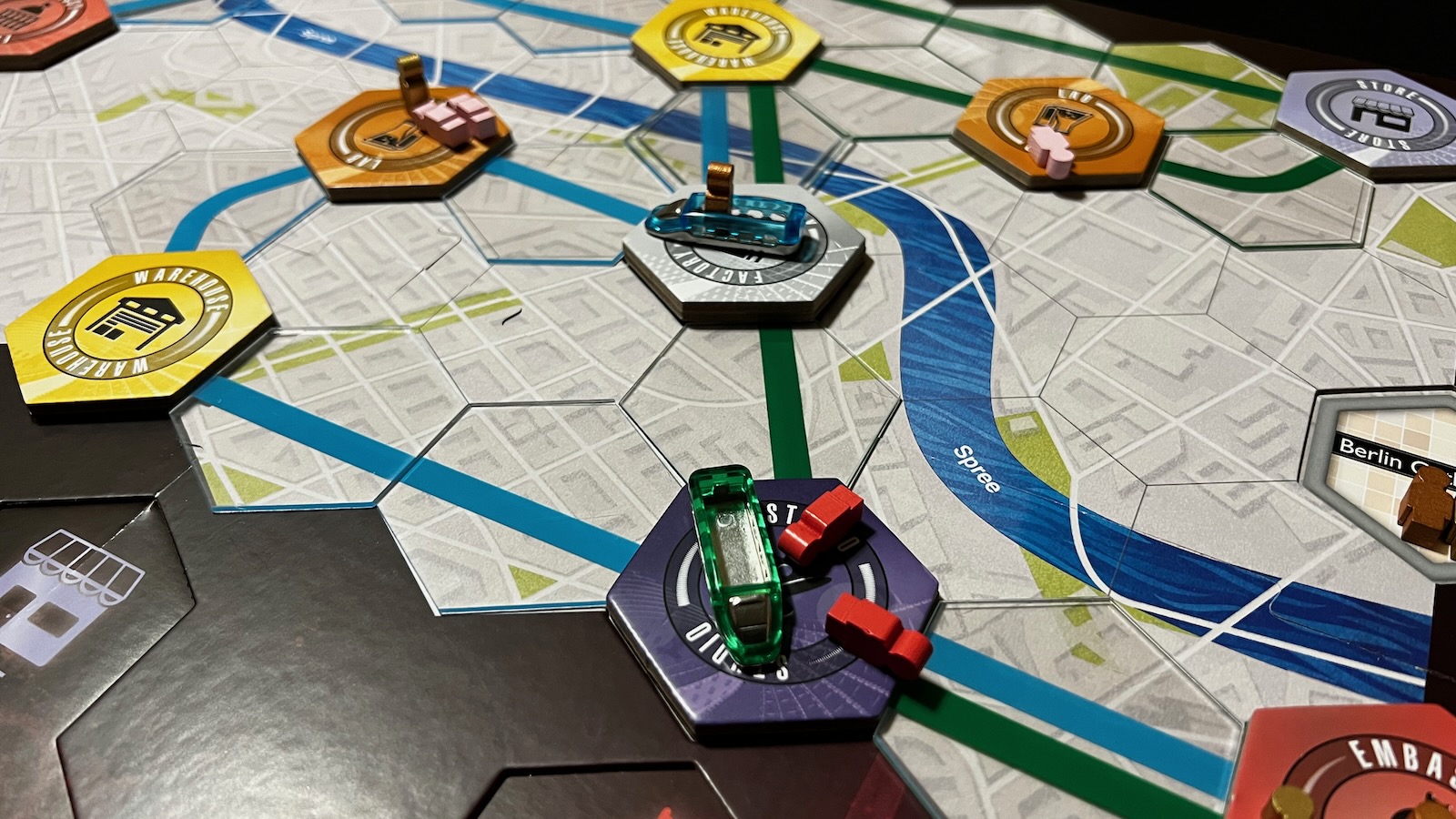 The strategy of Maglev Metro comes in on the player boards each participant controls. Players try to pick up and drop off robots to upgrade their machine and passengers to help unlock other actions and score points. These uniquely colored meeples must be delivered to stations matching their color and as robots and passengers are dropped off, the player gains and decides where to place the pieces on their board. These spots can optimize already available actions, unlock more possible actions per player turn, allow players to build different types of stations, provide service to new types of passengers, and even unlock higher score bonuses for the end of the game. Through their engine, players must balance the movement of their trains, train capacity, and where their tracks are headed on the map. One of the key strategies is what kind of passengers to unlock and making sure your track tiles service the right stations. As a player’s track gets longer, balancing which actions to take and optimize becomes more difficult. For example, more than once I saw players get discouraged by having to waste an action to turn their trains around which can only be done for free at the ends of your line. Other times, players wasted actions by not having enough pick-up or train capacity to execute a planned delivery. One unique feature of Maglev, is that players have the option of moving robots around their board to evolve their engine to their needs. By using a turn action, players can take away unit capacity from one action to bolster another. This balance becomes key to executing effective pick ups and deliveries. 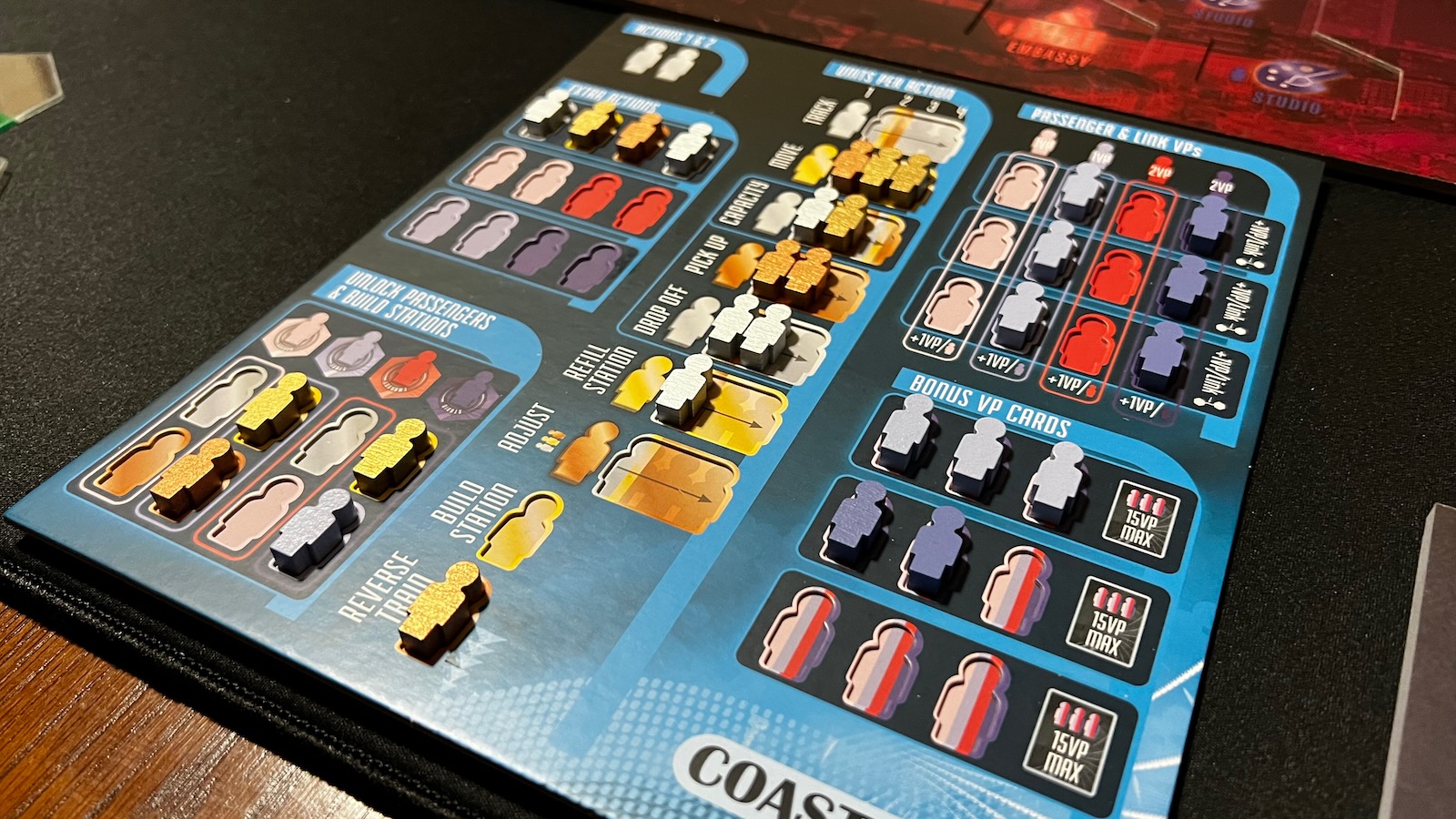 One of the highlights of the game is the variability. Players are given the choice between cities that offer different set-ups and play styles. New York has a central hub where all players start, all three colored robots can be dropped off, and any train can turn around whether at the end of their line or not. Meanwhile, the Berlin map offers more variability at the start and caters towards a more seasoned board game player. Players are also given up to four end game scoring cards at the beginning of the game with only the guarantee to score one. Maneuvering your strategy towards optimizing end game points and unlocking extra cards changes the game each time. The instructions also include a solo mode for those looking for an individual experience, however, the game is much better with other people. 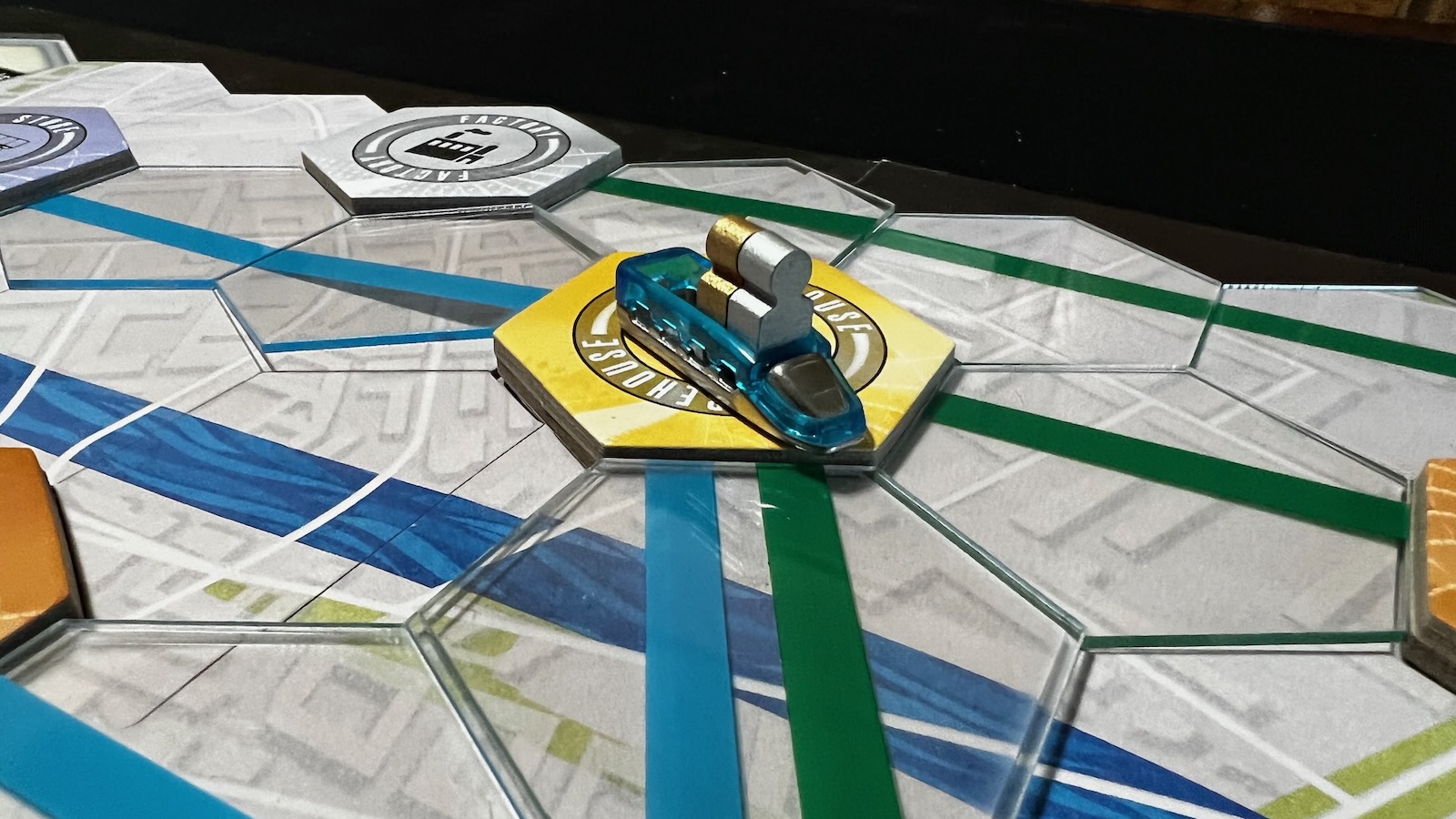 Blue player with two different robots moving down their route.

The production quality of Maglev Metro should be the standard for all retail games. The individual trains are weighted, made of metal, and designed to fit up to four of the meeples for easy transport. Each player board is recessed to allow the meeples to lay nicely taking away the fear of an inadvertent table bump sending pieces flying everywhere. The main board consists of four large puzzle pieces and includes the same recesses for the station tiles. The station tiles are made of a thick high quality cardboard engineered to be the same height as a stack of four clear track tiles once placed in one of the recessed spaces. The clear track tiles are also designed so that when placed on top of each other there are no overlapping colored tracks. The transparent track tiles allow players to use the same spaces in different ways without being blocked by another player. With all that being said, there were a couple of times where tiles didn’t fit neatly between the stations causing some difficulty in tile placement. Another flaw of the dual layer players boards is the tendency to warp as the glue dries up, as was the case with some of the boards in the box. Lastly, the gold and copper robot meeples and the dark purple and lavender passenger meeples were both very similar in color which caused some confusion when taking turns. One player picked up the wrong color and wasted numerous turns trying to drop off the robot to the wrong location. 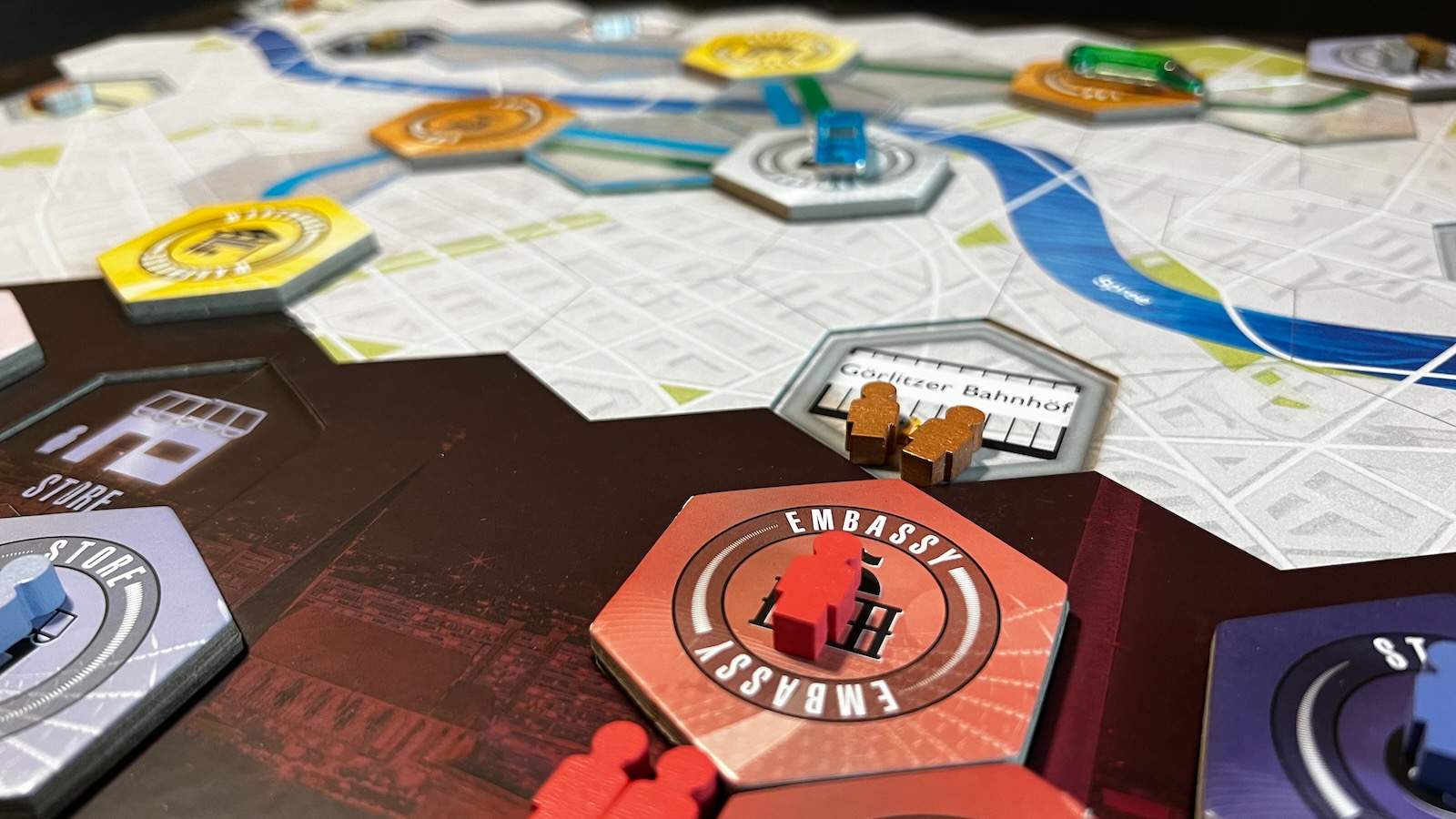 Embassy station tile waiting to be placed on the board.

What makes this game great is the fact that it can be thrown on the table with relatively new and seasoned board gamers alike. The gameplay is very similar at the player counts, however, with more trains on the board there tends to be a bigger need to refill stations and more competition over the scarcer passengers. The strategy in Maglev is enough to challenge the newcomers looking for a step up from other popular train games and enough to keep the veterans engaged for the hour or so of play time. Most players were excited to get the game back to the table again after they learned the strategies involved. Upcoming expansions offering new maps and play styles means that this game will stick around for a while on the table.

Maglev Metro is a great entry into the game collection for those looking for a relatively short strategy game with a great table presence and aesthetic. Maglev breaths new life into an already crowded train game genre.

Dan is a newly married educator from Colorado. Growing up as an Air Force dependent gained him lots of new perspectives on the world and a love for making new friends, especially over a good board game. When not at school or playing a board game, Dan is probably at the gym or a local sporting event. Dan loves heavy euros, adventure, and living card games.
Related Articles: Maglev Metro, Tabletop
Share
Tweet
Share
Submit