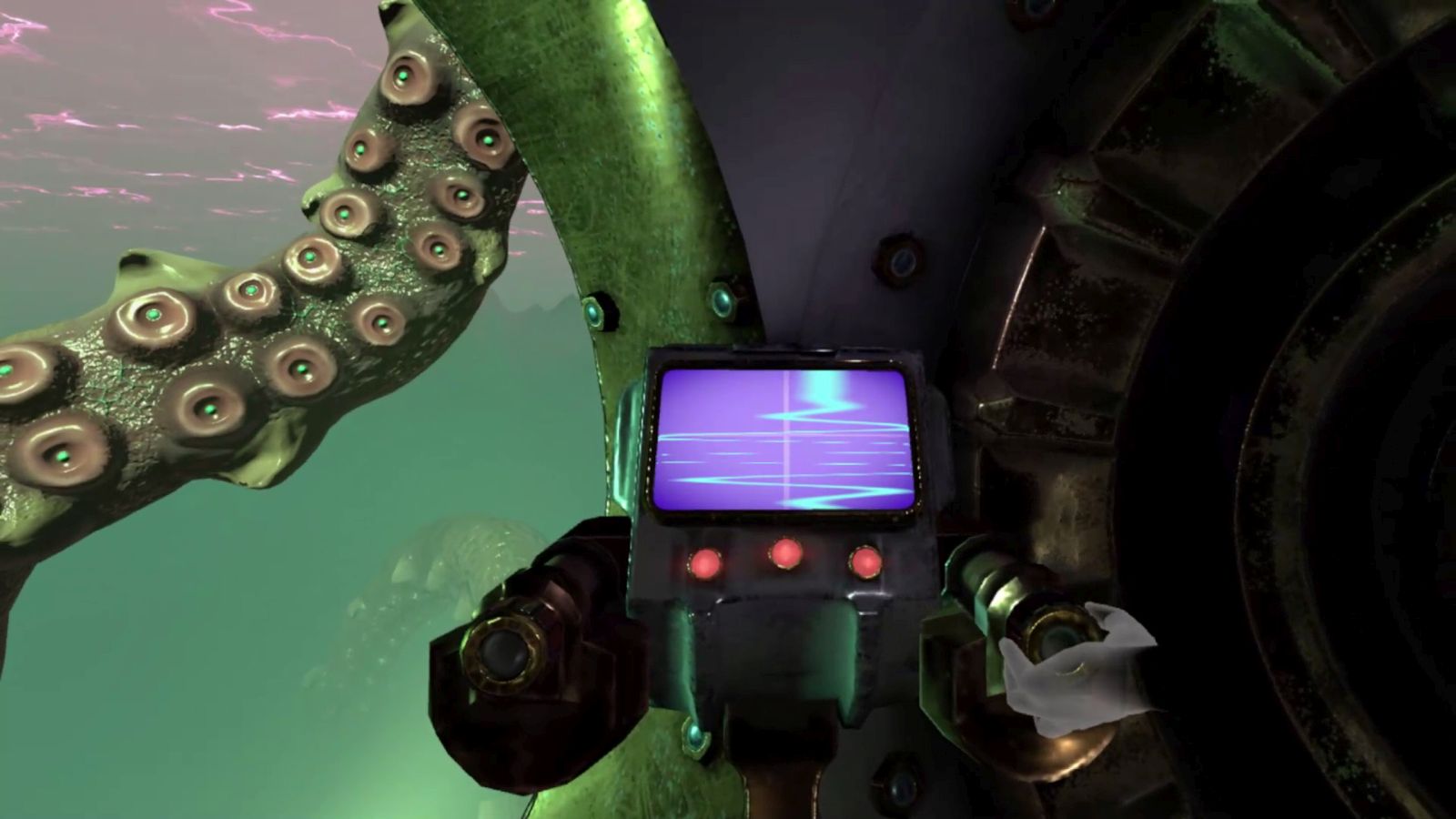 You scramble into the elevator. You have no idea how you are going to escape, but you know you have to get free of this oppressive place. Bold as brass, you are going to get into that massive walking machine called a “Nauticrawl”, and you are going to steal it. But for now you’ll need to figure out how operate this stupid elevator…

A Rogue Escape is part escape room, part roguelite, and all interaction. Too many VR games lean in on the “show” angle and don’t give the player their chance to jump in and interact to tell their stories. Here, you are given a simple objective — escape. How? Well, that’s for you to figure out. Why are you escaping? That’s a tale told along the way as well.

Once you figure out how to get the elevator to move, you’ll find yourself in a Nauticrawl — a massive steampunk submarine-like monster that you have no business operating. The machine is a mystery, and the instructions aren’t all that helpful either. It’s time to start flipping switches, turning knobs, and muddling your way through. Here’s the first 25 minutes of the game (I don’t want to give away too much!) where I play through the game for the first time.

So, I failed. I ran my Nauticrawl out of fuel, and I managed to get through a door or two, but now I’ve been dragged back to my mysterious bastille. That’s not gonna stop me from trying again — and now we have the roguelike portion of the game. Armed with the little bit of knowledge I gleaned from my last attempt, I have the beast up and running in seconds rather than 10 minutes. I now have a different problem — efficiency. I overheated last time — I won’t do that again, but I still need to figure out how to stop the turrets from damaging my Nauticrawl. They didn’t stop me, but running out of fuel did — I’ll have to figure out how to make this thing more efficient or how to get more fuel along the way. Managing all that might get me outside the walls, but there’s still the problem of being underwater in a mechanical monster that I’m unqualified to operate.

A Rogue Escape is all about experimentation. The game doesn’t hold your hand, and like a submarine, you can’t even see where you are going beyond the sonar system central to your controls. There are buttons, levers, wheels, switches, scopes, and knobs in every direction, and the directions you have are pictograms that are incredibly unclear, and yet somehow entirely too specific. Standing in the middle of all of these buttons, try not to panic when you realize you’ve not seen even half of what it takes to operate this machine properly.

As you saw in the video, the game doesn’t provide much in the way of instructions beyond a simple and mysterious pictographic tablet. If that sort of gameplay causes you to run to your closest walkthrough site, then this is not the game for you. That said, if escape room logic puzzles, and figuring things out on a clock is your jam, then this is going to be right up your alley. 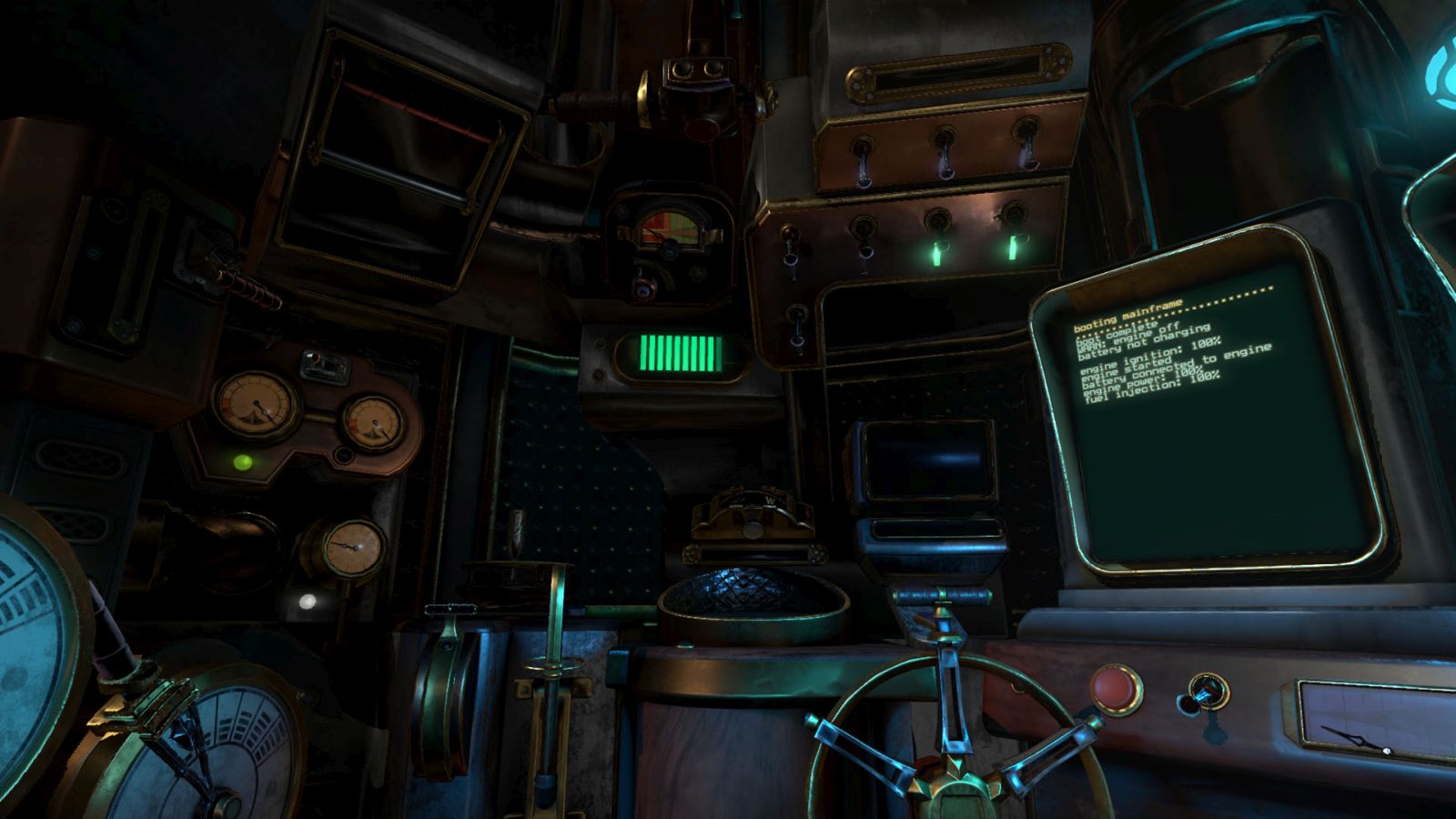 For a game that you’ll be inspecting at very close range, you need gorgeous assets. The team at Spare Parts Oasis delivered that in spades. You’ll be looking at scopes and dials, and readouts, but there are plenty of moments where you’ll also encounter massive creatures, and even the odd vendor or two. It’s a big expansion from the team’s previous effort, Nauticrawl (Steam link) and a bit of a graphical and gameplay overhaul in the transition from flat screen to something that’ll be inspected at far closer range. The year and a half between that game and A Rogue Escape has served the team very well.

The question in your head is likely “Is this a game I’m going to enjoy?”, and the answer to that question lies in your enjoyment or aversion of roguelike elements. You are going to die. You’ll keep dying, making the smallest amount of progress each time. If trial and error with fatal consequences isn’t your thing, then this adventure is not for you. If you enjoy experimenting in VR and love the incredible feeling of discovery that blind luck, interacting, and deduction brings, then you need to grab A Rogue Escape.

A roguelike where discovery of what to do is as important as how to do it, A Rogue Escape is an imaginative blend of escape room discovery, storytelling, and all the interactive elements you could ask for. While it is relatively short, that doesn’t make the journey any less worthwhile.

Ron Burke is the Editor in Chief for Gaming Trend. Currently living in Fort Worth, Texas, Ron is an old-school gamer who enjoys CRPGs, action/adventure, platformers, music games, and has recently gotten into tabletop gaming. Ron is also a fourth degree black belt, with a Master's rank in Matsumura Seito Shōrin-ryū, Moo Duk Kwan Tang Soo Do, Universal Tang Soo Do Alliance, and International Tang Soo Do Federation. He also holds ranks in several other styles in his search to be a well-rounded fighter. Ron has been married to Gaming Trend Editor, Laura Burke, for 21 years. They have three dogs - Pazuzu (Irish Terrier), Atë, and Calliope (both Australian Kelpie/Pit Bull mixes).
Related Articles: A Rogue Escape, VR
Share
Tweet
Share
Submit