Alliance of the Sacred Suns is an upcoming 4X (expansion, exploitation, exploration and extermination) grand strategy game from Hooded Horse being developed by KatHawk Studios. The game sees you playing not as an omniscient, bodiless non-character, but as the emperor of a galactic empire that is threatening to fracture at every second. Because you are playing as one person ruling an empire, you have to be sure to take care of your character’s mental health (Spirit) and physical health. Doing so will ensure that the emperor has the maximum amount of Action Points (AP) that they can have. Every decision matters as AP are not bountiful and must be replenished by resting your character which takes time away from ruling.

Made up of six great houses with different alliances and beliefs, the empire you lead is fragile, and bringing it under your control is the key to success. In order to maintain control and power, you have to manage resources, build relationships, and bring houses to heel. Whether you force people into subjugation or coax them under your umbrella, your goal is to ensure your empire is stable. The fact that you are playing as one emperor and not an entire line of their descendants means there is a time limit to achieving your win condition, and this time limit is either extended or shortened depending on how well you treat your character.  Failing to take care of your emperor’s mental and physical health results in penalties to stats as well as AP, but could be more beneficial for the empire in the long run. Every time your character forgoes rest in order to take one extra action or strains themselves mentally, however, it will be registered by the game and have lasting consequences. If you allocate too much time to yourself, however, you may end up neglecting your imperial duties. Players will be forced to make a hard choice every time a decision comes around as they walk the line between ruling and self-care. 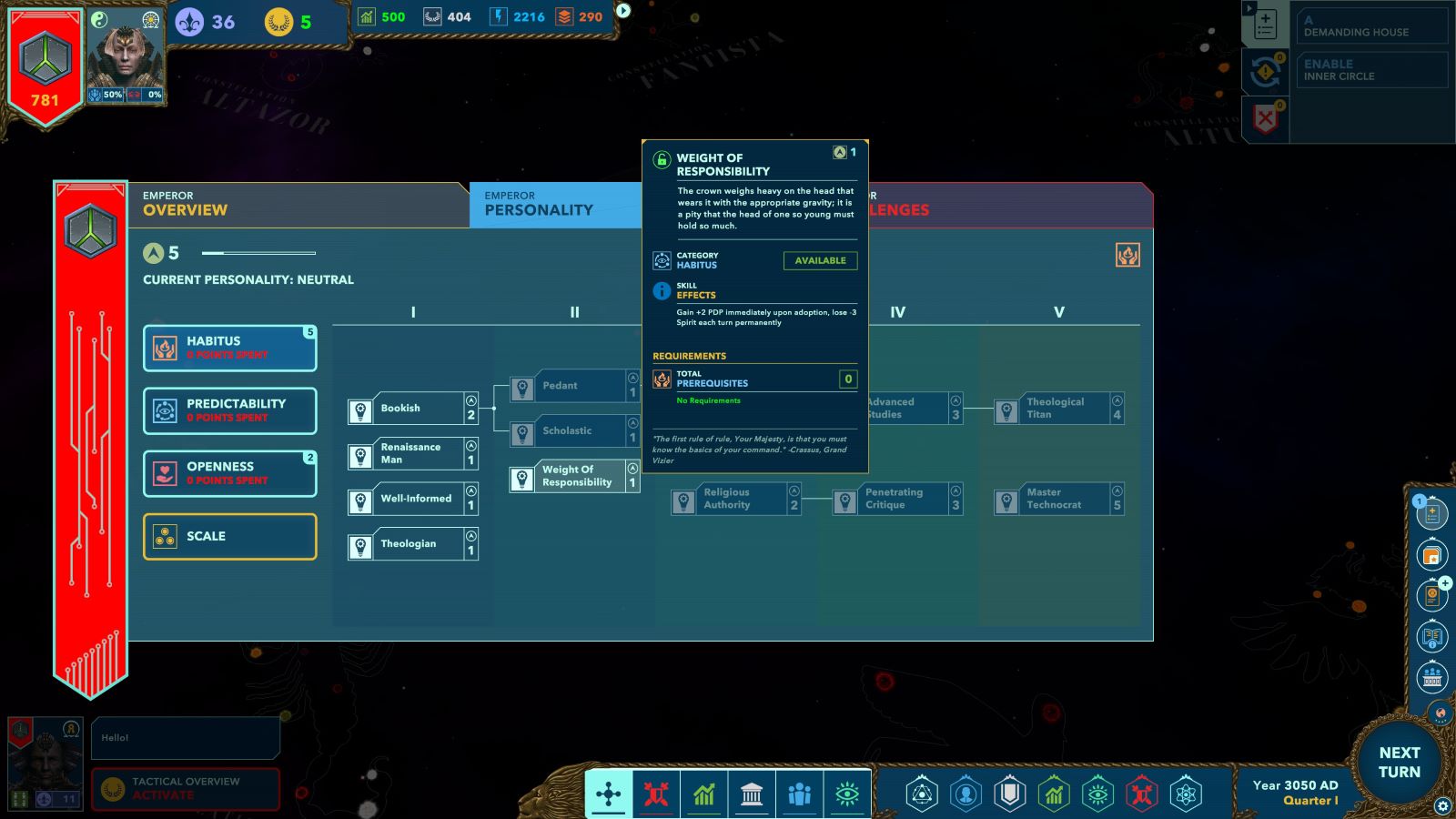 Whatever you intend to do, you must go through the proper channels to do it. If you want to change the primary focus of a planet’s economy, then you must go through the viceroy of that planet who has a stat sheet and relationships of their own. Nothing is done alone, and everything takes time out of your character’s day, making your decisions bear weight. 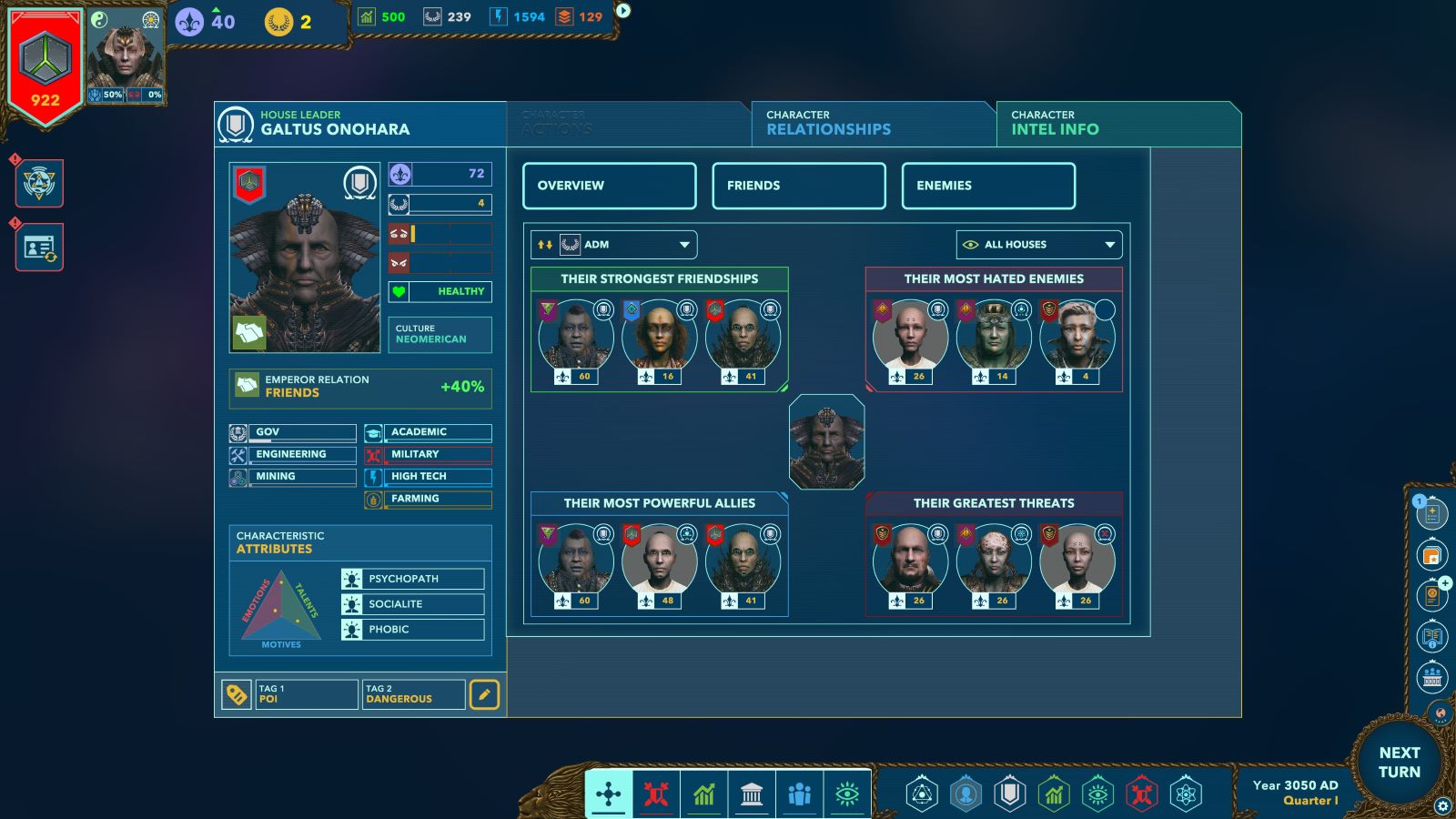 The feudal nature of the six houses making up the empire in this game brings Dune to mind, and it is hard not to make the comparison when seeing the game in action. Every house has their own motivations and unique styles. The character designs all feel decidedly old school sci-fi in a way that feels absolutely perfect. Where the game really shines is in its presentation; the UI here is some of the best I have seen in a strategy game like this. Strategy games are mostly UI, so you would think that developers would strive to perfect it in every case, but this game’s attempt at it feels unique. Every screen is unified by the same types of symbols, the same pleasing colors, and a theme that feels deliberate. Information is presented in a way that is easy to digest while still providing layers of depth. Developer KatHawk Studios has iterated on the UI many different times before finally arriving at the current look, and their hard work definitely shows. If you are a fan of strategy games, and maybe even if you are not, Alliance of the Sacred Suns is certainly one to look out for later this year.