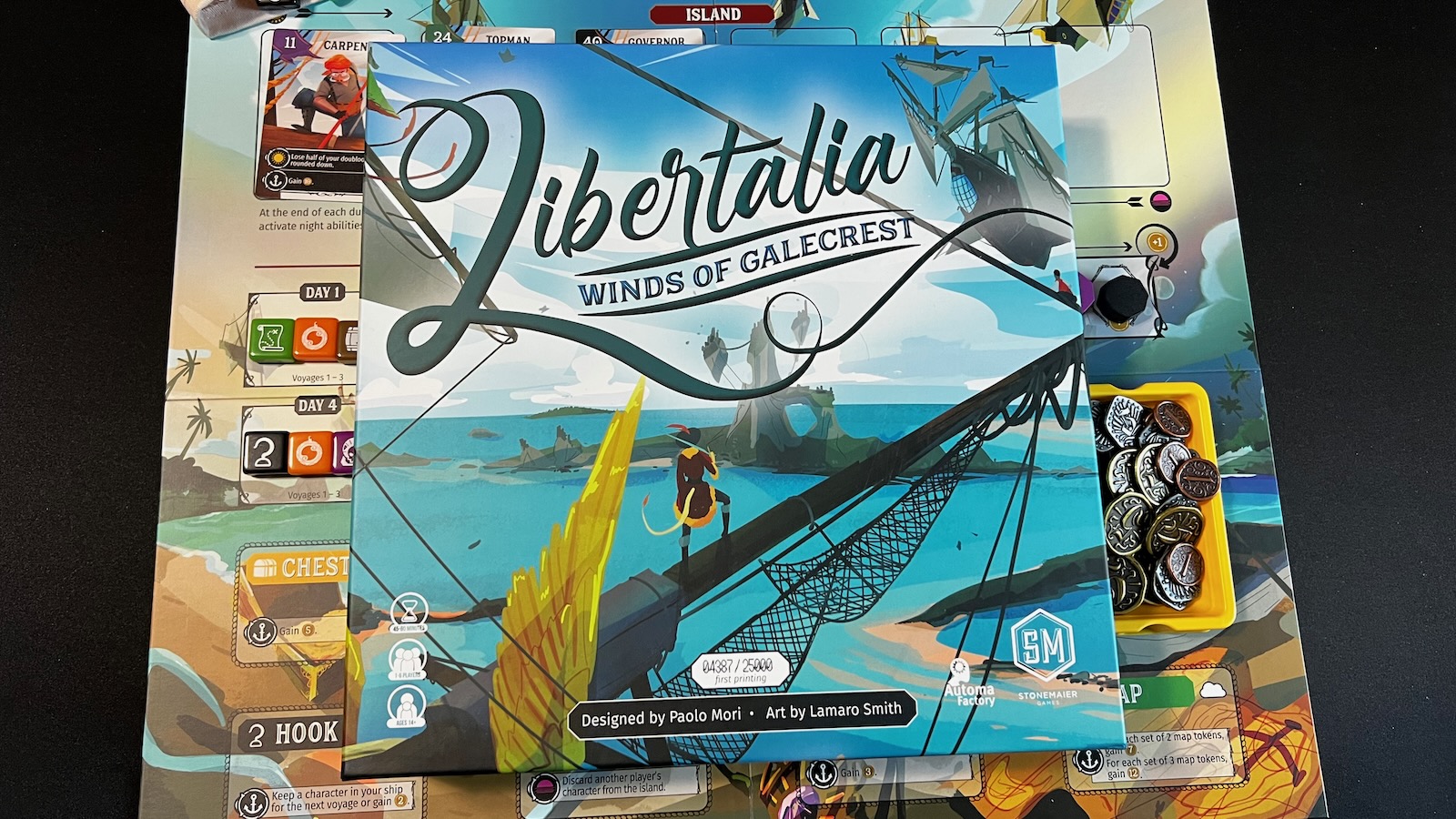 Take to the seas…I mean skies, with Libertalia: Winds of Gailcrest. You are the pirate captain of a skyship setting out on three different voyages trying to score the most loot. You must use your crew to outsmart the other pirate ships who are vying for the same treasure. Libertalia: Winds of Galecrest reimagines the popular board game, Libertalia from 2012, both designed by Paulo Mori, and sets sail again with new artwork by Lamaro Smith, a new publisher in Stonemaier Games, and some new gameplay updates. 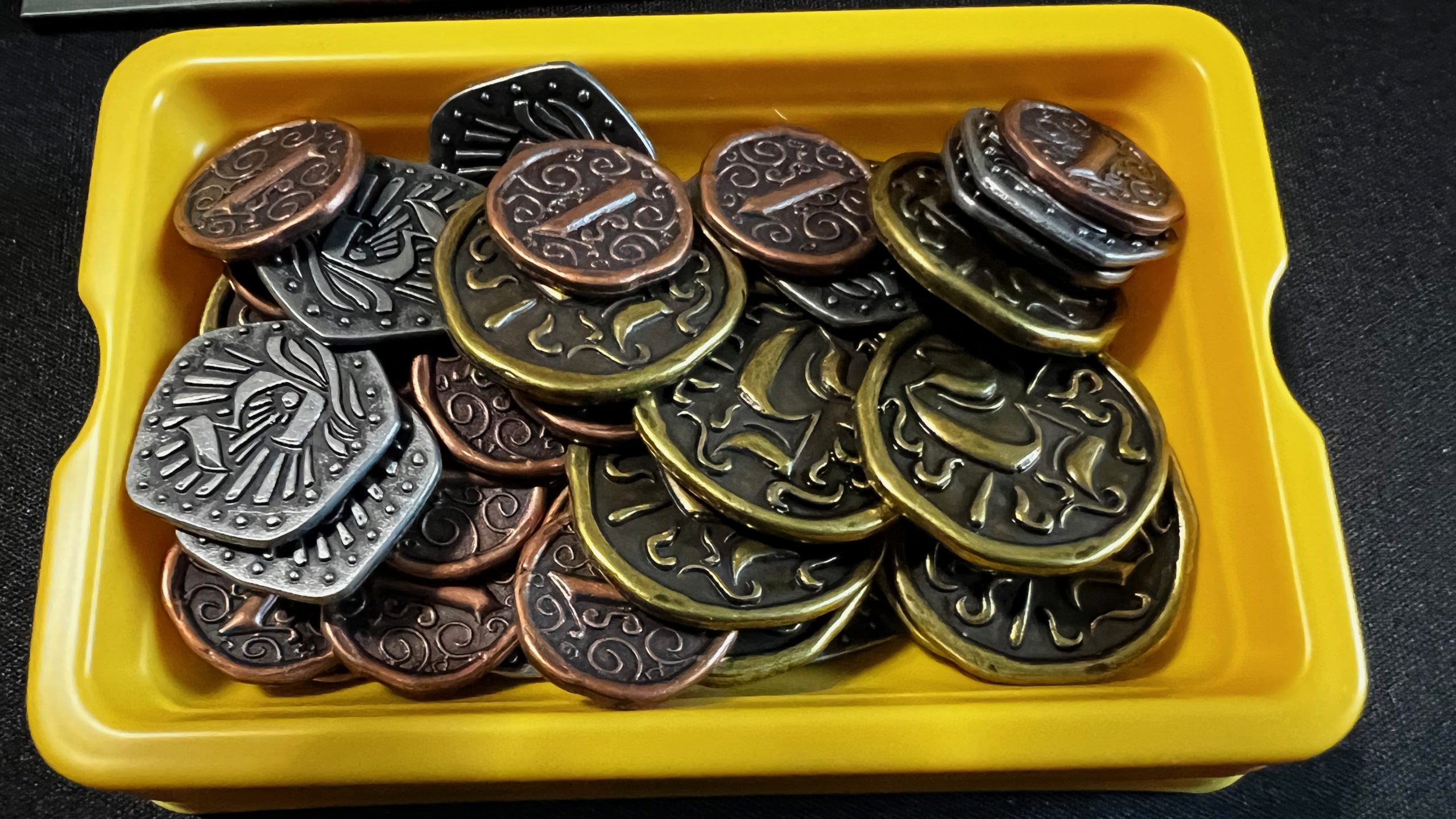 Upgraded metal coins used to track points each round.

Liberatalia takes place over three voyages consisting of 4-6 days or rounds of play. Each of the 1-6 players in the game will get a deck of 40 cards, each featuring a different crew member. Each day, a number of cards are randomly picked to serve as the same starting hand for each player. At the beginning of a round, each player chooses a card from their hand to play. When revealed, the cards are placed on the board in ascending order and the three phases of the turn begin. 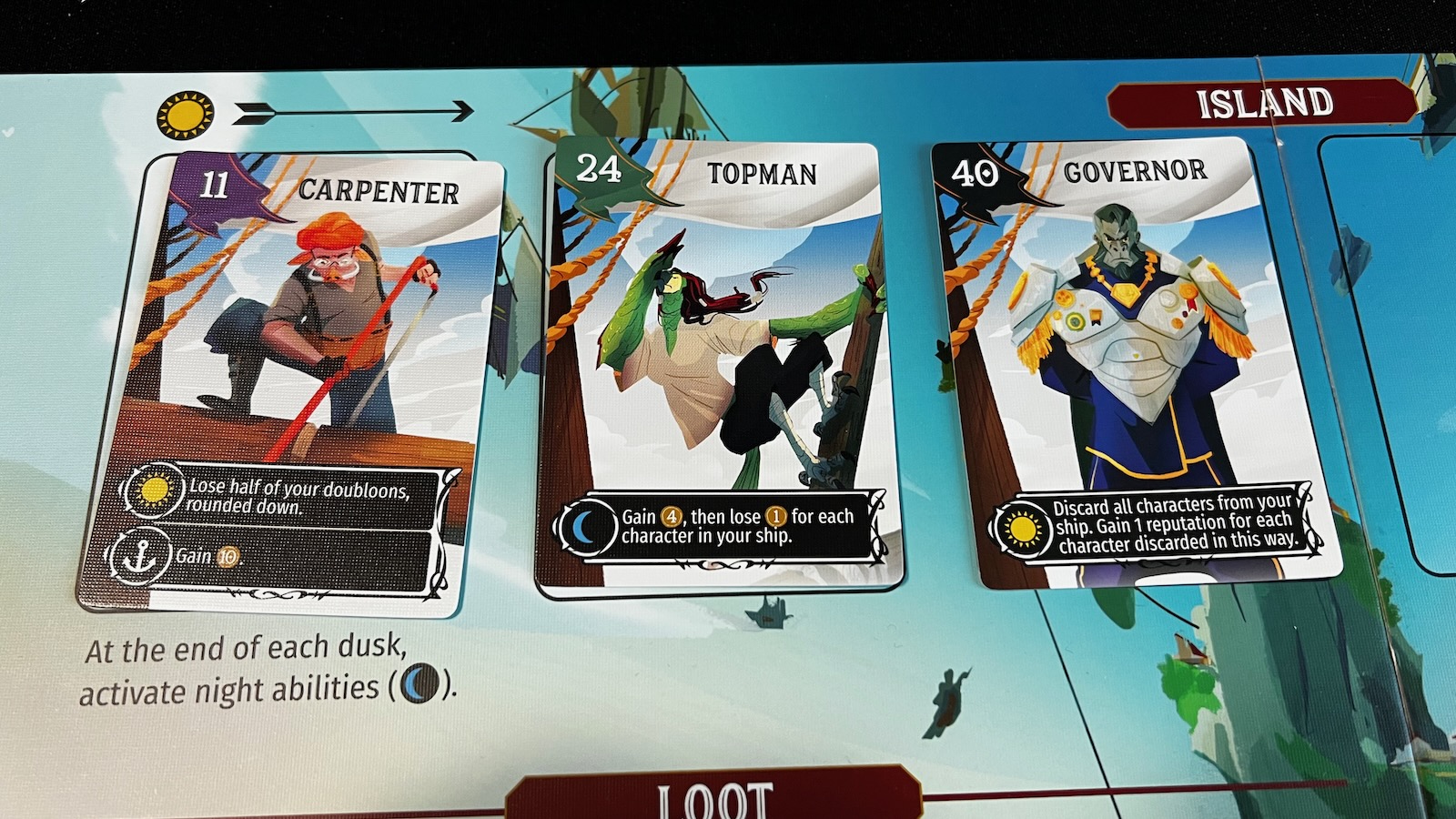 Crew members are revealed by each player and placed in ascending order.

Phase 1, called Daytime, activates special abilities on the player’s cards from left to right. Some of these abilities can cancel other player’s card effects, gain the player money, or even extra player cards. Starting with the highest card played on the right, the next phase, called dusk, allows players to choose one of the treasure tokens placed on the board at the beginning of the current voyage. These tokens give players special abilities throughout the voyage and end of voyage bonuses or penalties. In the final Night phase, players activate any special night abilities of their played cards or the cards on their ship. The ship contains cards played in previous days and each player also has a graveyard of defeated pirate cards that have been removed from the game. At the end of each voyage, players count their total doubloons accrued throughout the trip and add them to their treasure counters. The player with the most points on their counter after three voyages wins! 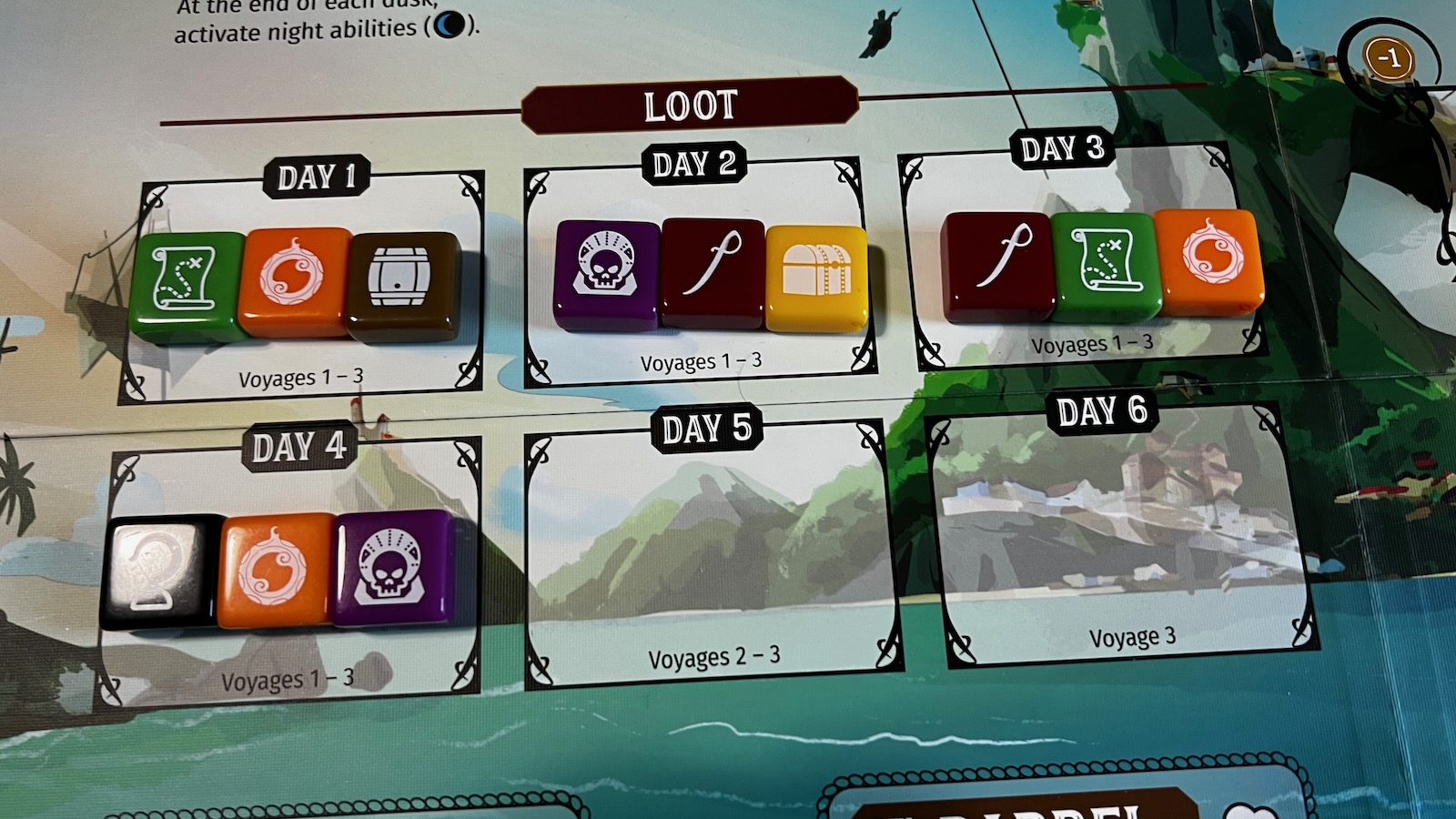 At the beginning of each voyage, loot tiles are placed on the board to be claimed each day. Each voyage adds another day and more chances for loot.

While the gameplay of Libertalia: Winds of Galecrest is basically the same as its original counterpart, the designers updated a few key elements. One of the major changes is the inclusion of the reputation track. This track replaces tiebreaker rules and determines the number of doubloons that each player starts with at the start of a voyage. The game also includes 10 more player cards and changes the number of characters played on each voyage. The game also includes some variability with interchangeable token abilities. One side of the board is calm and gives some passive abilities for the tokens, while the other is stormy and makes the tokens more interactive and cutthroat with the other players. The game also includes tiles to allow players to mix and match these abilities for variable gameplay. 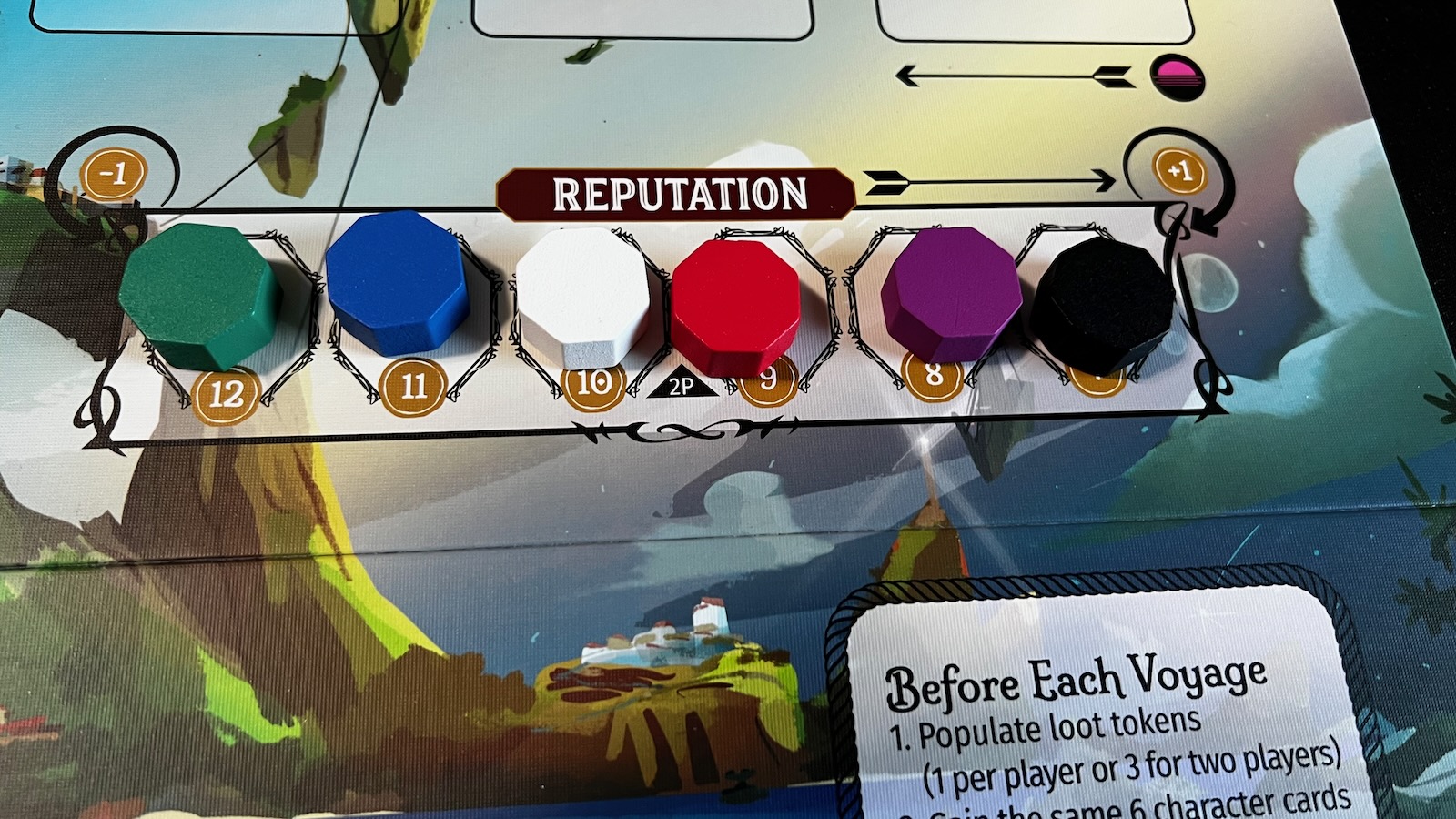 The reputation track helps with tie-breakers and beginning of voyage starting money.

Another great addition to the game are the variations for the 2 player and solo player counts. A Midshipmen tile adds a permanent character to the board that helps balance out the tokens and adds a fun element in head-to-head battles. In the solo mode, a special deck is used for the Automa player. This deck helps determine the cards played throughout the game. The solo player chooses a card as normal, then a card is pulled off the Automa deck and added to the board as a Pilferer. The only role of the Pilferer is to take a loot token you may want off the board. The loot tokens placed on the current day determine the actions the Automa takes including the character card played and the loot token taken. The solo experience was quick and fun and was left on the table for many evenings as I was learning the game. 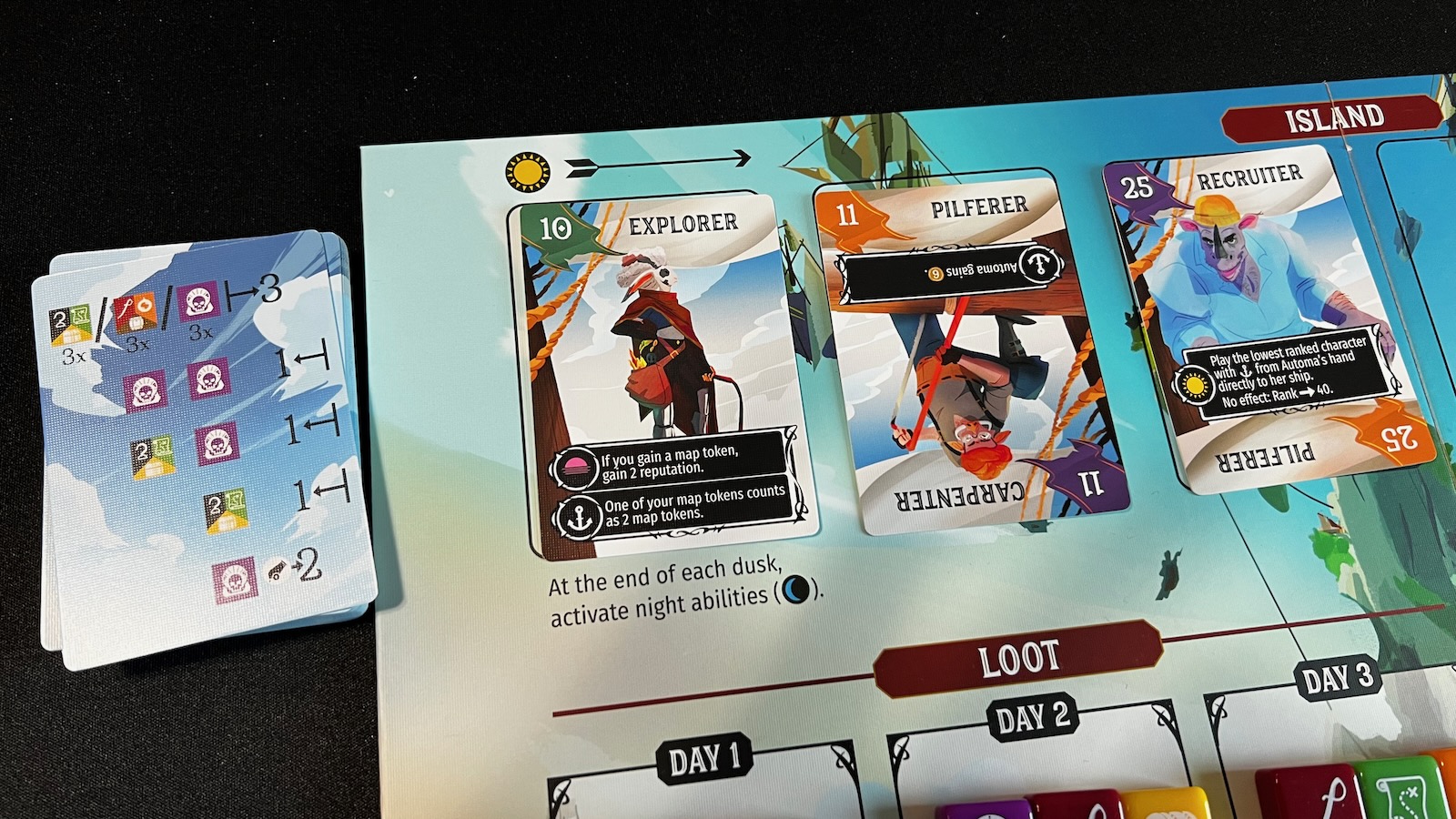 The solo game adds a Pilferer and a special Automa deck.

The production quality of the game is what many have come to expect from Stonemaier Games in their past releases. The artwork is whimsical and fun. Each of the cards has a unique anthropomorphic animal character and the board pops with vibrant colors that pull you into the experience. The loot tokens are printed double-sided and the weight of the pieces feels good in your hand. The cardboard doubloon tokens are  high quality, but you also can’t go wrong with the upgraded metal coins. The cards are also  high quality and feel great in the hands. Another thing every board game lover appreciates is a good insert and the Winds of Galecrest insert keeps everything nice and neat and allows for sideways and flat storage. 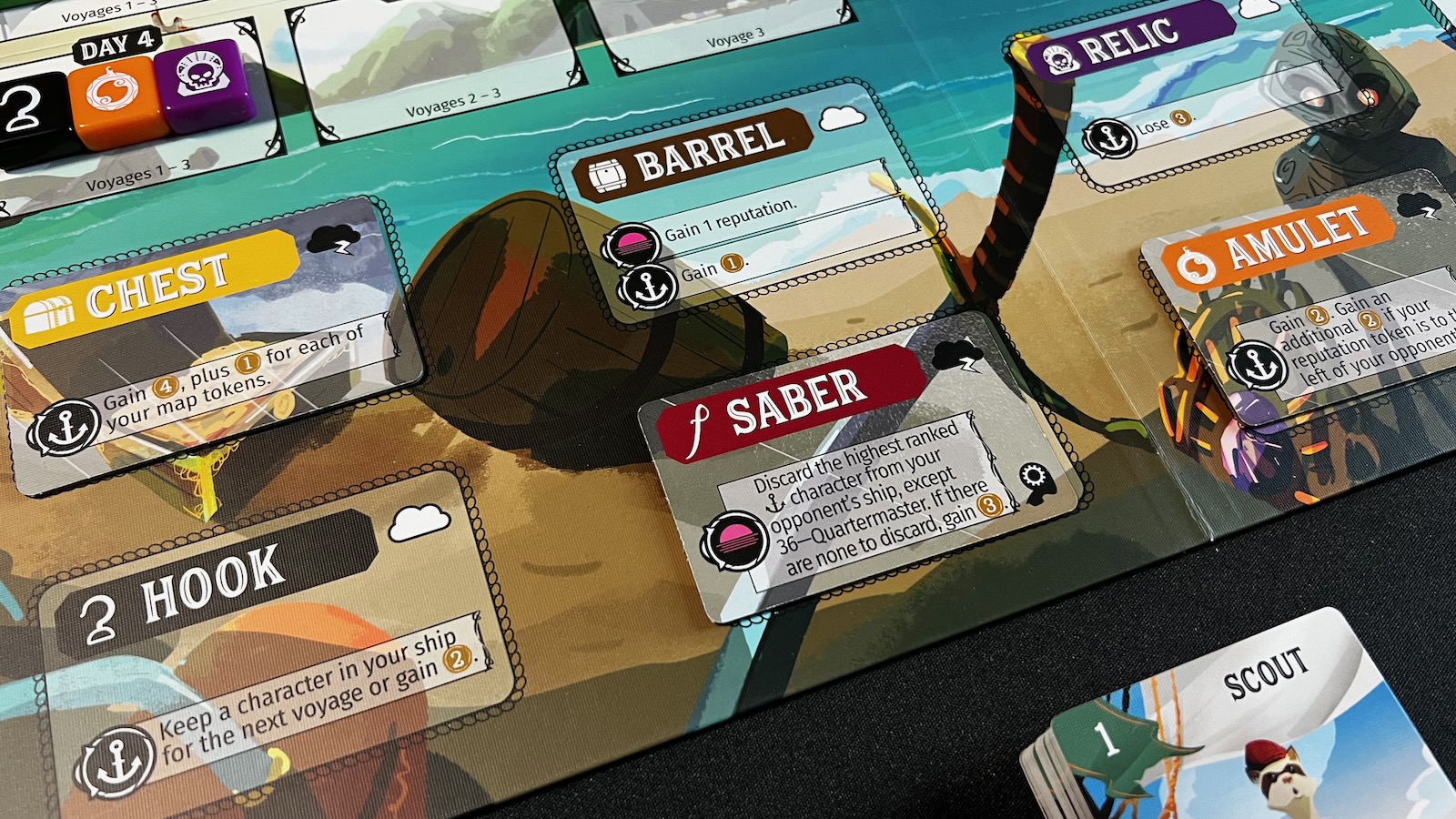 The gameplay for Winds of Galecrest is quick, interactive, and engaging. One of the best things about the game is the ease of entry for new players. The rulebook is clear and concise and each person that I taught the game to picked it up quickly and enjoyed the experience. One of the best things is the ability to tailor the game to the group. Calm? Stormy? A mixture? Player count? The game scales well to what you want your group may want out of the game.

Libertalia: Winds of Galecrest is a great tabletop experience. The redesigned elements of the game only make the overall experience of playing Libertalia better. Whether you have two or six players or you are out for a solo adventure, the card combinations, the player interaction, and the great mind puzzle make this a must-play experience.