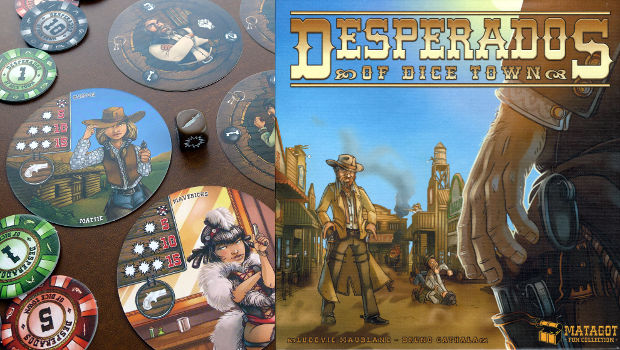 Board gaming has seen an explosion in dice-based games in the last few years, reflecting the popularity of King of Tokyo, Quarriors, Zombie Dice, Alien Frontiers, Castles of Burgundy, the new and smokin’-hot Marvel Dice Masters, and many others. Desperados of Dice Town, from Matagot and distributed by Asmodee, sets out to stake its own claim in the burgeoning world of dice-chuckers.

In what is becoming another trend in board games, Desperados resides in its own game world, Dice Town, which originally appeared in the game…uh, Dice Town, from noted game designers Ludovic Maublanc (Ca$h ‘n’ Gun$, Cyclades, Mr. Jack) and Bruno Cathala (Cyclades, Mission Red Planet, Five Tribes). The two have paired up on several successful projects, and they reteam with artist Pierô in this Wild West-themed bones roller.

There’s gold in them thar hills

The bottom portion of the box contains a slope-sided insert that turns it into a dice arena for throwing dice, a thoughtful touch.

The components are average quality, with acceptable dice engraving, though the paint fill on the engraving isn’t as good as some games, such as Seasons. The Desperados dice measure about ⅝” across, average size yet not up the standards of King of Tokyo, with its chunkier ¾” dice, or the huge dice in Seasons, which measure ⅞”.

The double-sided desperado cards show the same character in jail and out. One of the game mechanics is to rotate the jail side around a set of numbers (like opening a bank safe) on the card edge to free the desperado, so the desperado cards are round, about the size of a drink coaster. The cards have a slight plastic feel, possibly signaling a coating, which means more durability than uncoated stock.The Wild West card stock is thicker but doesn’t appear to be coated

The artwork is cartoon-ish but works fine for the theme.

“Mongo only pawn in game of life”

Desperados of Dice Town’s objective is for each player to break his or her gang out of the hoosegow, to shoot up the jailed desperados in the other players’ gangs (costing them money), and to free all five gang members first while having the most remaining money–or bankrupting all the other players.

Each player begins with $50 in chips. Each card in the gang is placed jailed side up in descending order from left to right according to the highest number on the edge of the card (Boss – 6, Lady – 5, Bad – 4, Ugly – 3, Brain – 2). The number determines how many “clicks” the desperado card must be turned before the desperado escapes jail and can attack the other gangs.

Each die has six icons, five of which correspond to members in each gang:

A player can roll any or all dice up to three times on a turn. Three matched icons (except for Action) let the player draw three Wild West cards and keep one. Four of a kind (except for Action) yields a four-card draw, keeping two. If after three dice rolls the player has nothing but junk, draw one Wild West card and keep it. The Wild West cards modify the rules of the game and can be played on a player’s next turn after being drawn. The cards dictate when they take effect. Examples include The Lightweight, who forces another player to roll just two dice, or The Mayor, who can cancel the effect of any card played by another player.

But this is a dice game, so…

When combined with a die icon for a particular desperado in the gang, an Action face on the die means a member can take one action. In jail, this means the player can rotate that desperado’s card down one number closer to escape. A player can take as many actions as Action faces rolled. If the desperado is freed, the number of actions combined with that desperado is consulted on the card, and, in most cases, results in a loss of money for the other players. For instance, if the Boss has been freed, and a player rolls three Actions and the crossed Colt pistols, the Boss can deal $18 worth of damage to any player whose Boss is still jailed.

That last part is key to strategy. Dollar damage is inflicted only by a freed desperado against the corresponding jailed desperado of other players.

Player A: Freed Boss and freed Lady, all others jailed.

Player B: Freed Boss and freed Brain, all others jailed

Player C: Freed Ugly and freed Brain, all others jailed

If A rolls the Derringer pistol, the crossed Colts, and two Actions, he can

If B had rolled that same dice combo, she could

To add more diversity, each player’s gang and gang member are unique in appearance. The Brain for each gang has further diversity, since each one has a special Action ability. For example, in the Oleson gang, its Brain, Uncle Pat, can speed up freeing a jailed partner or even release one altogether with the right number of actions combined with the Whiskey bottle die.

All money surrendered is removed from the game. First player to free all his desperados while also having the most money wins. If he lacks the money, he will still win if he reduces the current money leader below his own amount in subsequent turns. Or the last player to avoid bankruptcy, whether all her desperados are freed or not, wins.

Desperados feels like a sprint to free gang members in the two-player game, which plays true to the box’s suggested game length of 25 minutes. Unfortunately, the four-player game feels more like a marathon. Whereas 10-15 minutes per player in a two-player game feels right, because of more information to track in the four-player game (which player has the most money, which can be hurt most or least by which card, which gang members are freed), it’s closer to 15-20 minutes per player. And in a game this light, that’s too long.

Some dice games have a plethora of dice from which to make decisions, and those dice often differ from each other. Desperados uses four identical dice. This limits not only the combos available in a game driven by set collection, but it’s also more likely you won’t get anything interesting. A fifth die, especially if it was different from the rest and gave six more items to think about, would have enlivened this game and given it more depth. In one of our plays, one player rolled nine times (three turns) and got nothing she needed each time, forcing her to pick a card she ultimately did not want. Too random and too limited.

Using the cards to modify how a player attacks, defends, and deals with other players’ card effects is not new, so Desperados needed more oomph here too. Instead, we get less, as many of the cards in the smallish Wild West deck are duplicates. When added to the low dice count, the combo makes the game feel less than it could have been.

Fewer options for play on any turn led one player to state, “This game plays you.” That’s as damning an indictment as exists in board, card, and dice games because it means the randomizers in the game (in this case the dice) don’t offer enough choices. The best play in Desperados too often is too obvious or fails to exist at all.

So that’s all the bad and the ugly, but does Desperados of Dice Town have any good? Yep, it’s simple to play and explain, plus it has a low MSRP of just $24.99.

Time to mention the 8,000-pound mutant gorilla in the room, the game King of Tokyo.

King of Tokyo features several of the same game mechanisms (sometimes reversed in how they work) as Desperados of Dice Town:

In every game of Desperados of Dice Town I played, someone volunteered this: “I like King of Tokyo better.” In other words, everyone who had played KoT understood how the two games overlap.

King of Tokyo has more (and more varied) dice, far more game modifier cards, more choices to consider in the game, a better cohesion between the player’s side and what that side can do based on cards and dice, and a more thrilling decision path in the push your luck mechanism than in Desperados’ racing mechanism. Plus, the monster standees in King of Tokyo form a more visceral connection to one’s side. And finally, this question: giant kaiju clawing each other to ribbons or a bandito and a card sharp dueling it out? Better and more play decisions give King of Tokyo the advantage. The major disadvantages? KoT costs $20 more, and it’s no fun with less than four players. That said, KoT plays up to six, two more than Desperados.

Should you buy Desperados of Dice Town?

Some board gamers choose not to own multiple games that “scratch the same itch.” This has a name: the Jones Rule (after Cody Jones of the now-defunct board game podcast Game On! with Cody and John).

The Jones Rule question here comes down to scratching that “light, set-collection, family-friendly, confrontational dice game under $50” itch. If cost is a factor, you’re playing mostly two-player, and you don’t already own King of Tokyo, then yes, consider Desperados of Dice Town. Otherwise, King of Tokyo stomps those desperados into so much cactus juice.

Weight: Light-Medium – “Grandma could play this–and teach it too.”

A couple of notable designers bring us a decent dice-roller set in a Western theme that would otherwise be a perfect choice for a family game if not for the existence of the similar, but much better, King of Tokyo.