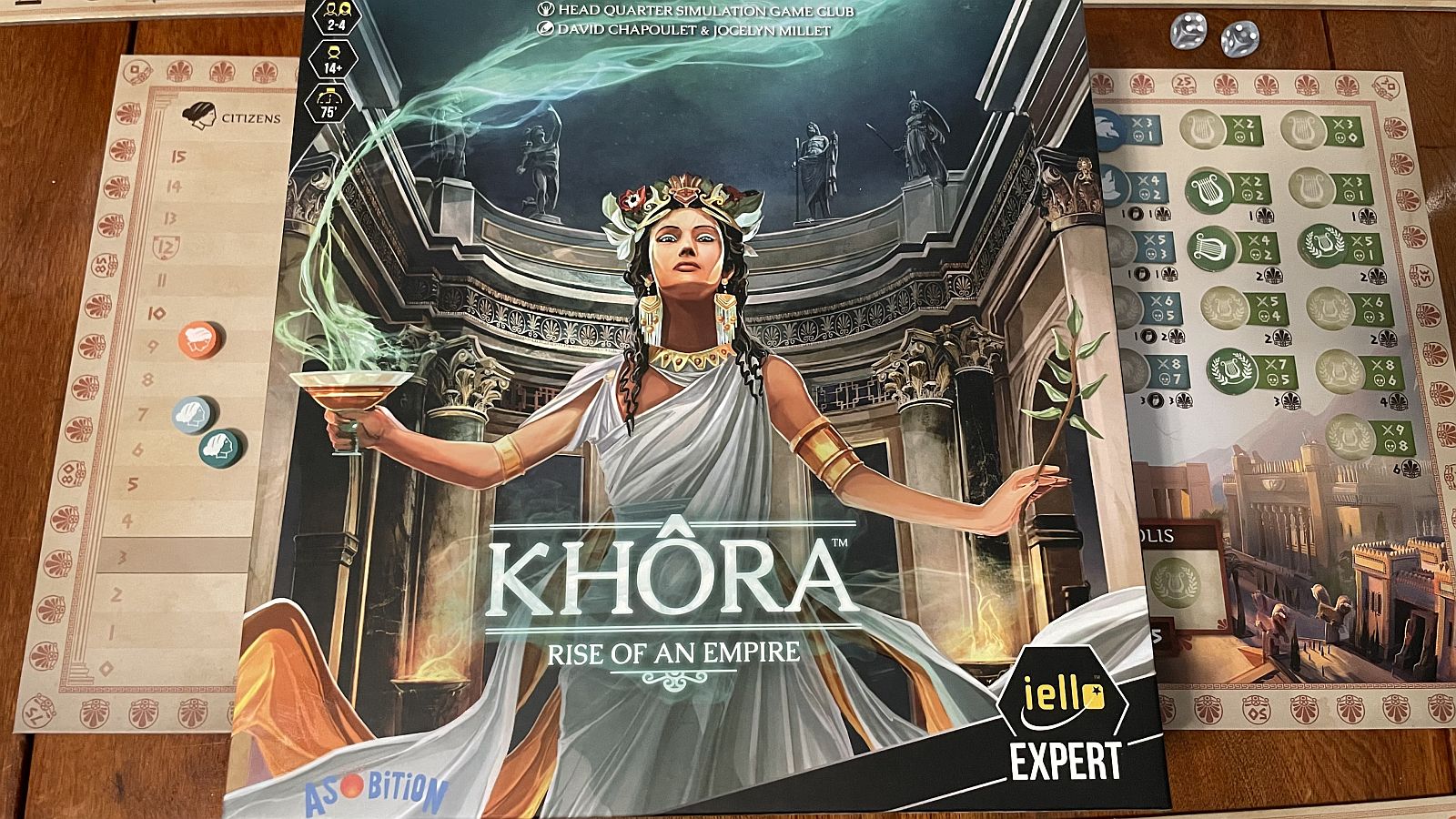 Khora Rise of an Empire from Iello came out in 2021 under the Iello “Expert” line. While I am aware companies can do a lot with marketing under the guise of using subjective descriptions, I’m really not sure who this game is for. Let’s get into it.

The back of the box says “As the leader of your Polis, you must develop your Economy, your Culture, and your Military, while sending out Troops to explore and conquer. Capitalize on your unique strengths to attract more Citizens, raise Taxes, recruit Troops, and garner Glory!”. Sounds pretty exciting right? 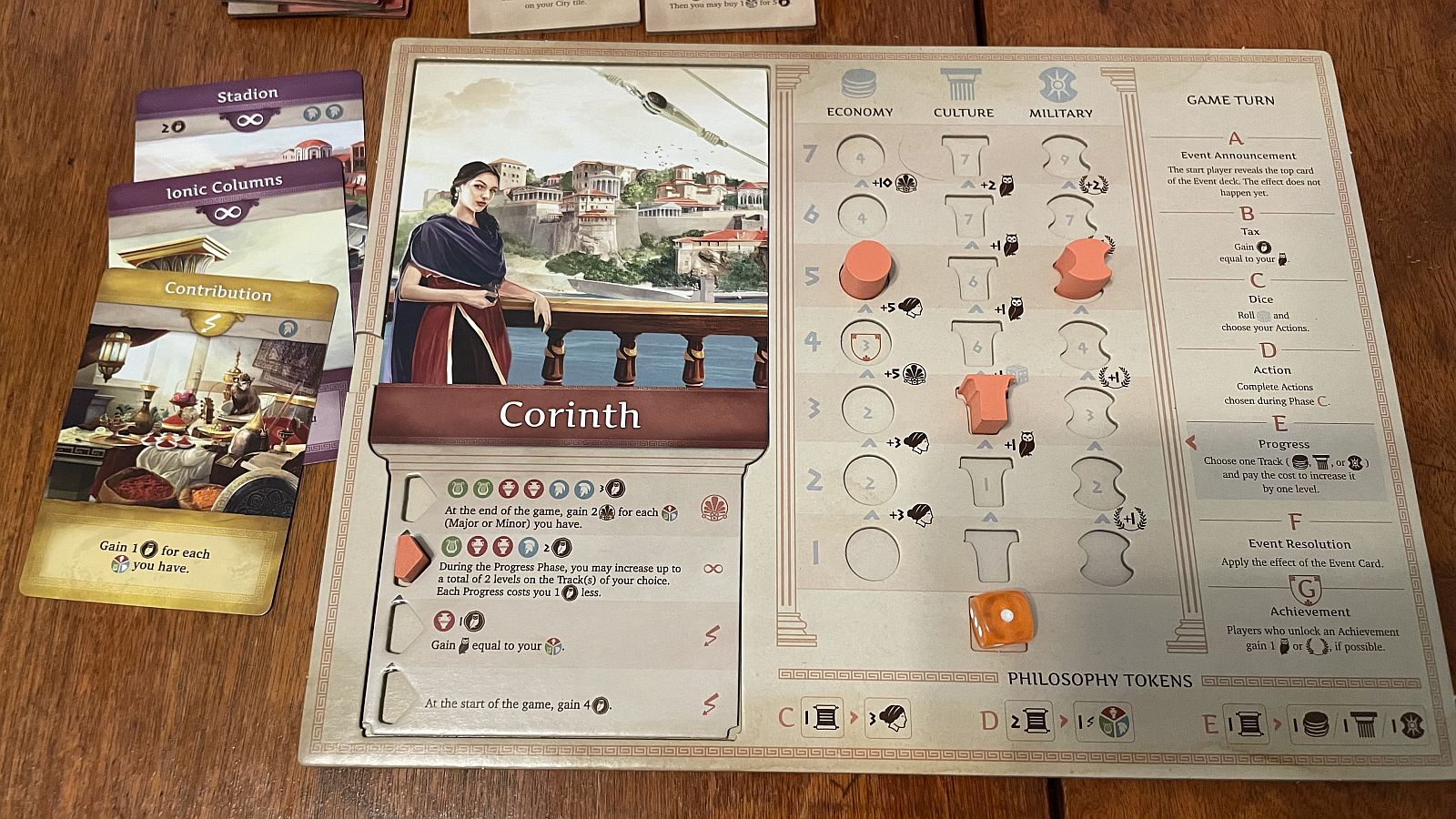 This game is sitting at a 7.5 on BGG right now (the accuracy of BGG ratings is another topic entirely) but it just fell completely flat with me. With that description, I was expecting a heck of a lot more excitement than slowly moving three trackers up a track. For some perspective, I am an avid euro gamer but I’ve only been in the tabletop gaming realm since around 2015. To me, this design feels quite dated and doesn’t stand up to modern designs. Maybe I’m not old enough to appreciate the classics.

In Khora, each player will be assigned a Polis (basically a city) with a tiny bit of asymmetry to give you a guiding push but not so much that it impacts the game beyond that. The core mechanic revolves around rolling a set of dice that determine what actions you can do on your turn. Every player has the same actions available to them and they are numbered 1-6. Everyone simultaneously rolls their two dice (you can unlock a 3rd in game) and secretly picks what two actions they will do. The catch is that actions you pick have to be equal to or less than your dice values, with the better actions being the higher values. 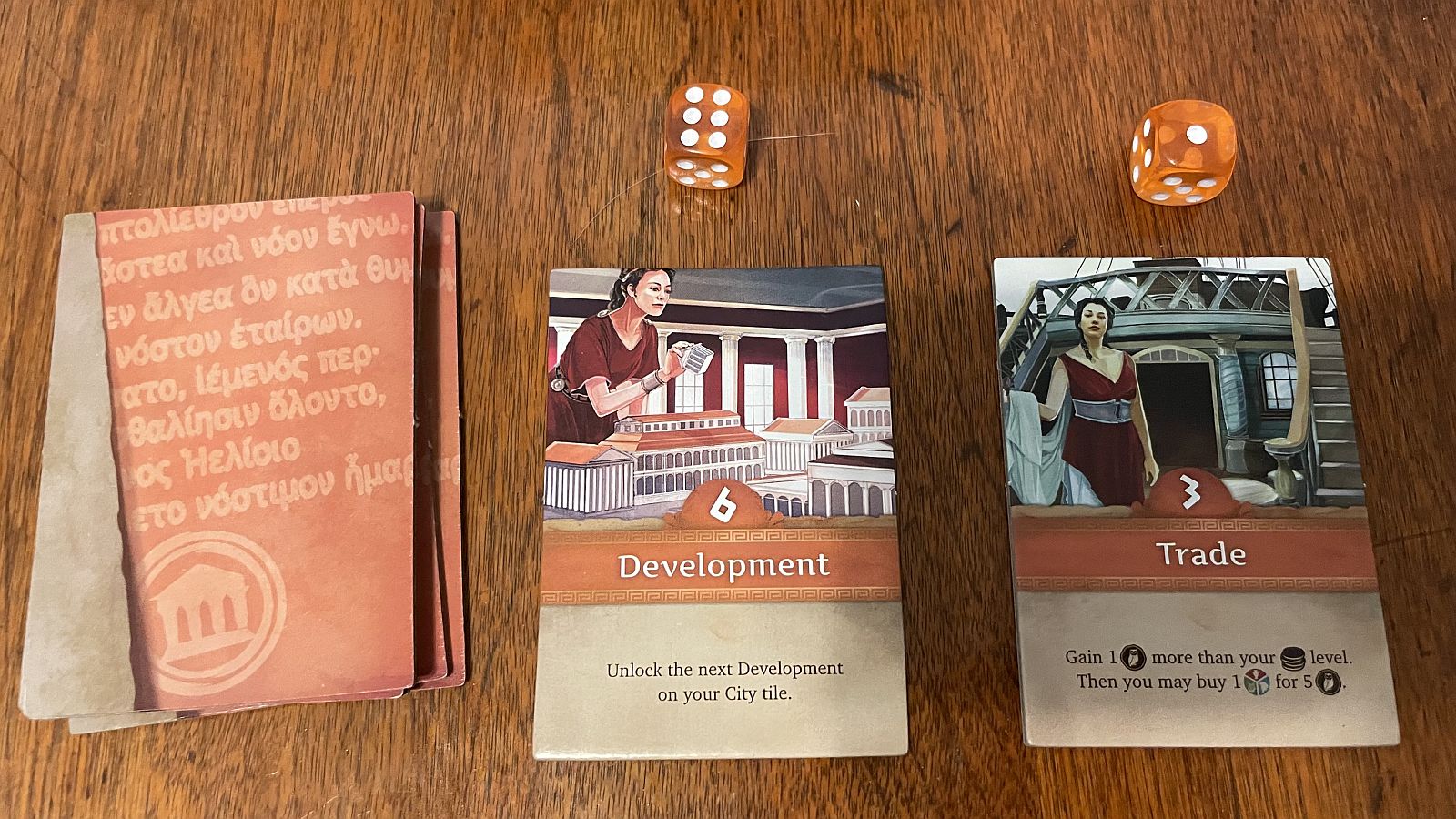 The action determination system is what initially caught my attention with Khora. It’s a novel way to have to make decisions while adding a splash of luck to what can sometimes be a stale deterministic genre. That all falls apart when the dice becomes a complete non issue due to Citizens.

Citizens are a resource in the game that you acquire through one of the actions and through just moving up one of the seven different tracks. If you don’t like your dice values, you can simply spend Citizens to increase the value of the die. That would be fine if Citizens ever felt constrained but there always seems to be plenty of them. It was rare while playing Khora to ever not be able to do the exact action that I wanted to do. Either the dice worked out since you have an equal chance of all 6 results anyway and most actions are equally as good as others or else I just spent Citizens and still did what I wanted. The entire foundation of the game is non-existent. 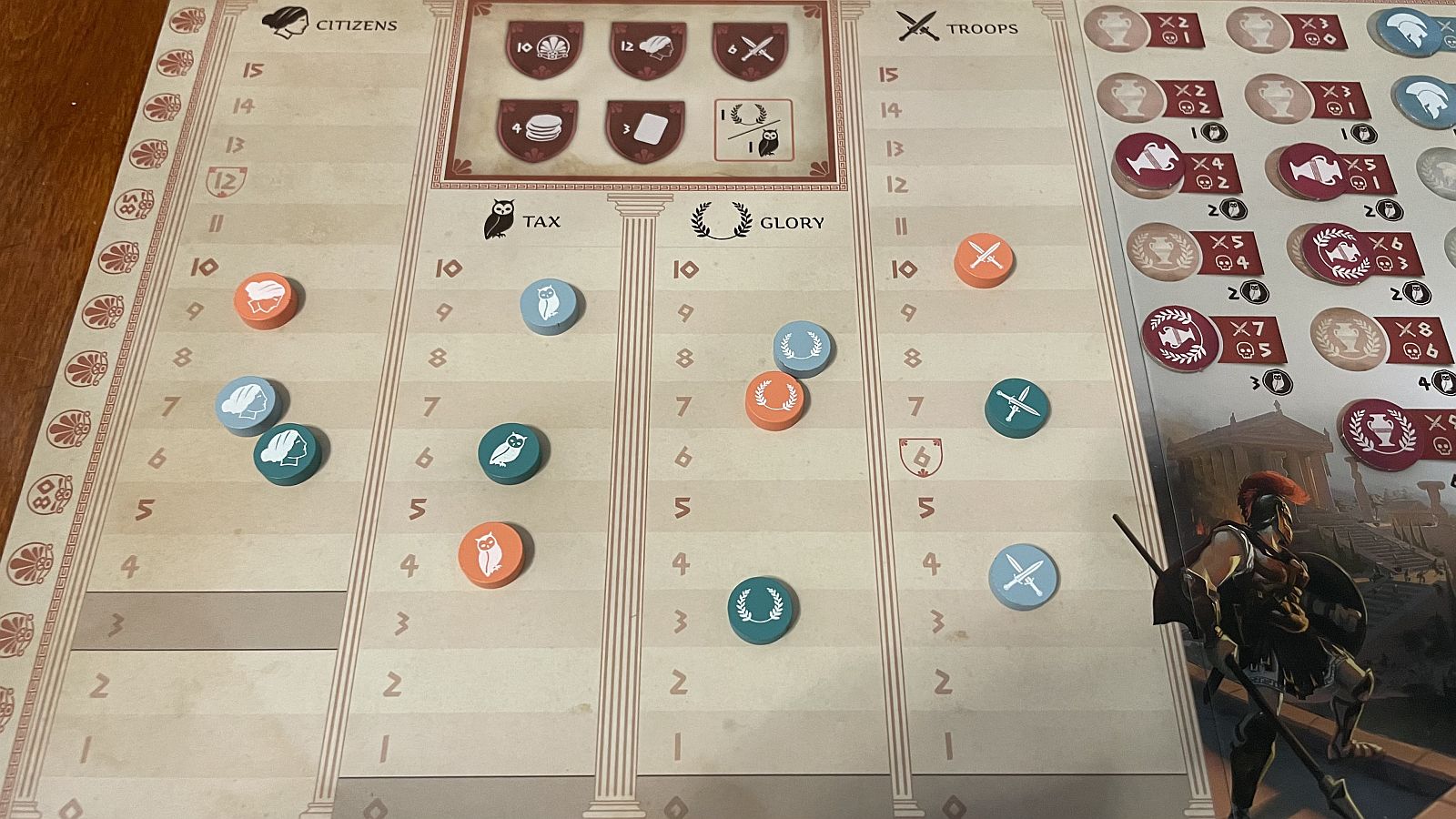 I won’t go into detail on the six different actions because they are all essentially moving a different tracker up a different track. The game plays almost 100% multiplayer solitaire. The only exception is the military exploration action that is first come first served on the central board. The colored tokens you take from exploring are critical to scoring end game bonuses from cards and achievements. Exploring is just a matter of having your military tracker at a high enough number to overcome the requirement to take the token so don’t get too excited. 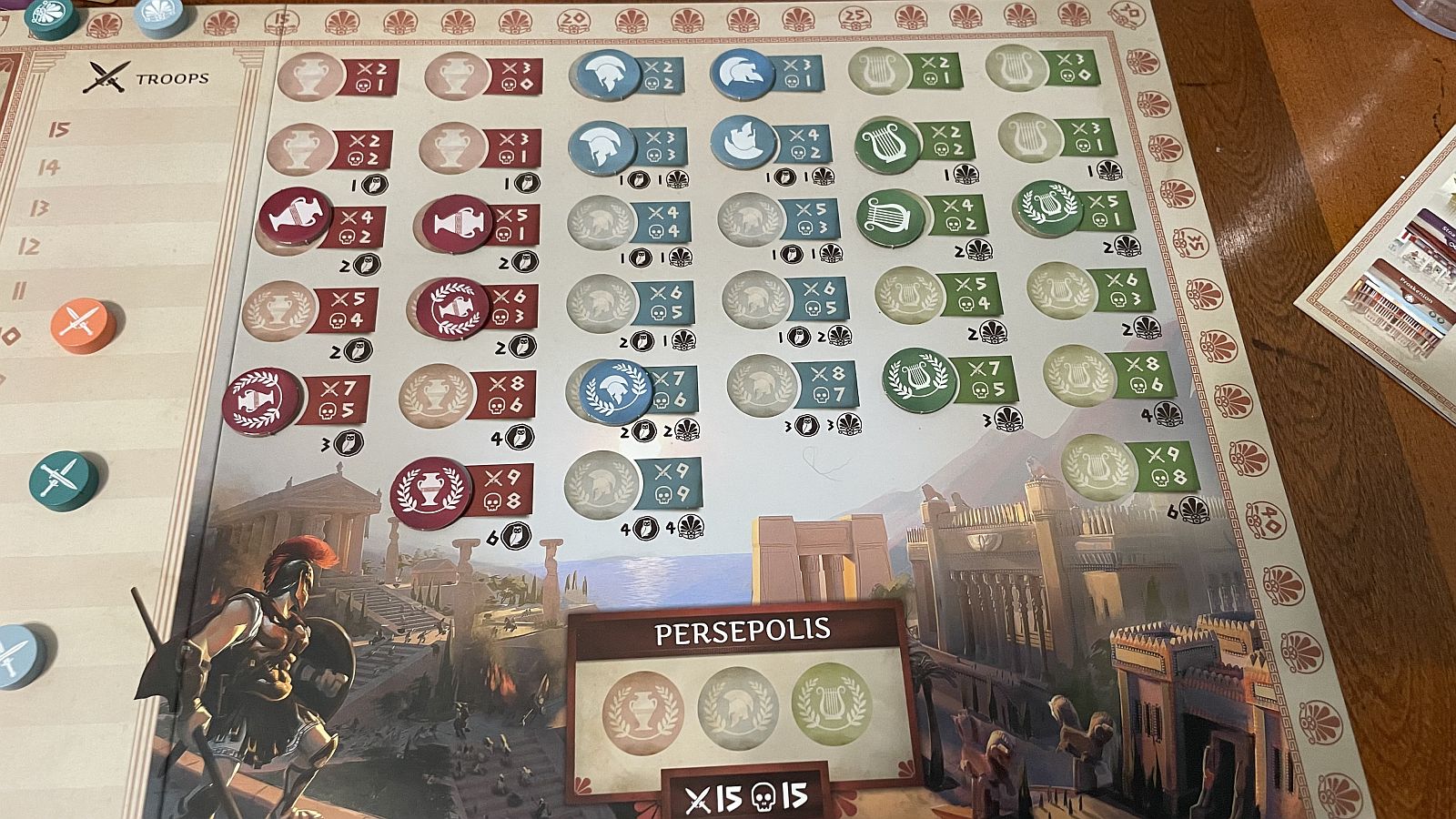 The overall production is very nice. The cover art is fantastic but completely misrepresents the tan on tan excel sheet that is the actual game though. Dual layer player board, custom tokens, and frosted (but tiny) dice make the player pieces feel great. The cards and tokens are standard quality. The box insert holds everything nicely but if you’re a vertical shelver, it won’t stay sorted.

Khora is described as an “Expert” game but I don’t see why. If you’re graduating from Monopoly then you might struggle to understand the same way anyone getting into modern tabletop games would, but anyone actively involved in the hobby beyond Ticket to Ride isn’t going to have a problem.

If you’re playing anything from Lacerda or something like Tzolkin (which has been previously published by Iello) then you will be extremely underwhelmed by this “Expert” game. If you’re new to gaming, don’t be intimidated, it’s really not that complicated. I can only assume this applies to all of the Iello expert line. Iello specializes in family weight games so from that viewpoint I guess it makes sense. Maybe.

The box art and description promise an ancient Greece themed city builder with players competing to establish the best Polis. In reality there is almost no competition to be had and the gameplay is extremely dry with the core mechanic completely failing.

Khora: Rise of an Empire

Khora promises and exciting premise that just doesn't deliver. The game is extremely dry and the mechanisms just don't work.