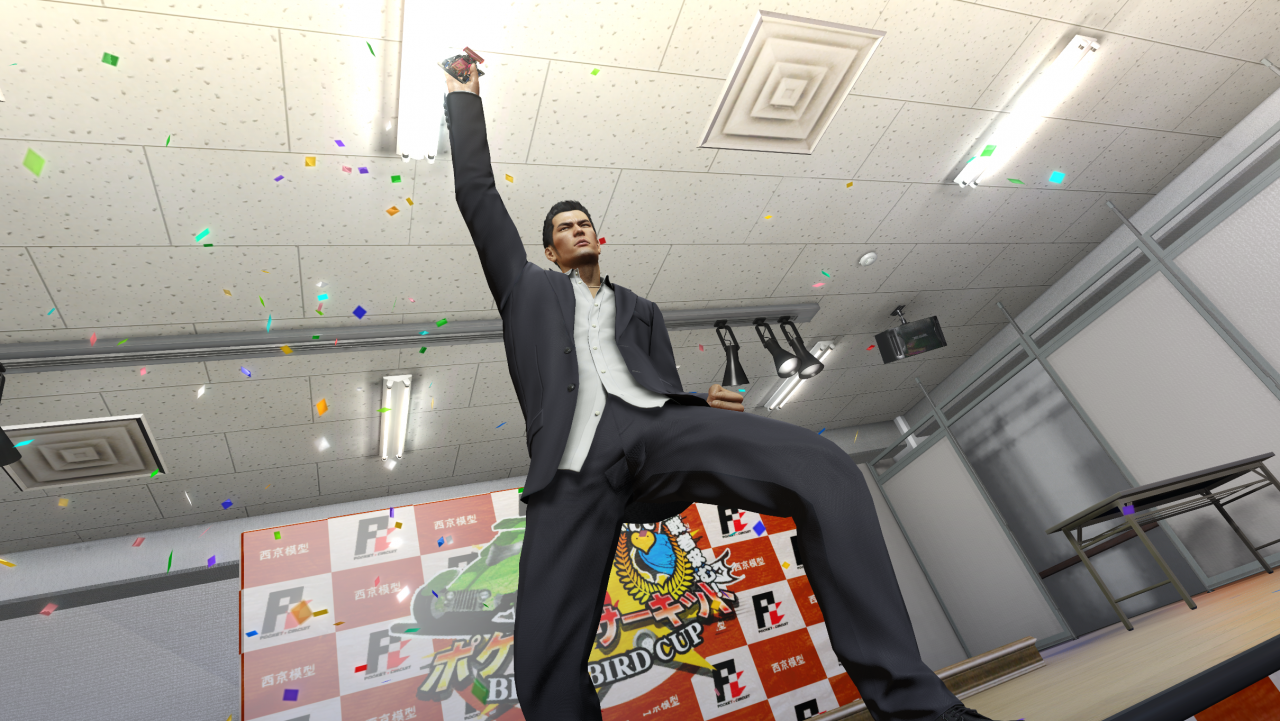 Yakuza 0 is my first experience with a Yakuza game and I’m excited to play the rest in the series because this is an incredible experience. Fun action mixed with a variety of side quests and mini-games come together to create an incredible game that’s hard to put down.

In Yakuza 0, you play as Kiryu and Majima on two separate stories that slowly come together. Kiryu is trying to prove his innocence in a murder and protect his adoptive father from being kicked out of the Yakuza. Majima is stuck running a cabaret club to make money for the Yakuza after getting kicked from the family for insubordination until he is tasked with murdering someone for a chance to rejoin the family. Both of these stories offer twists and turns and are enjoyable from start to finish. 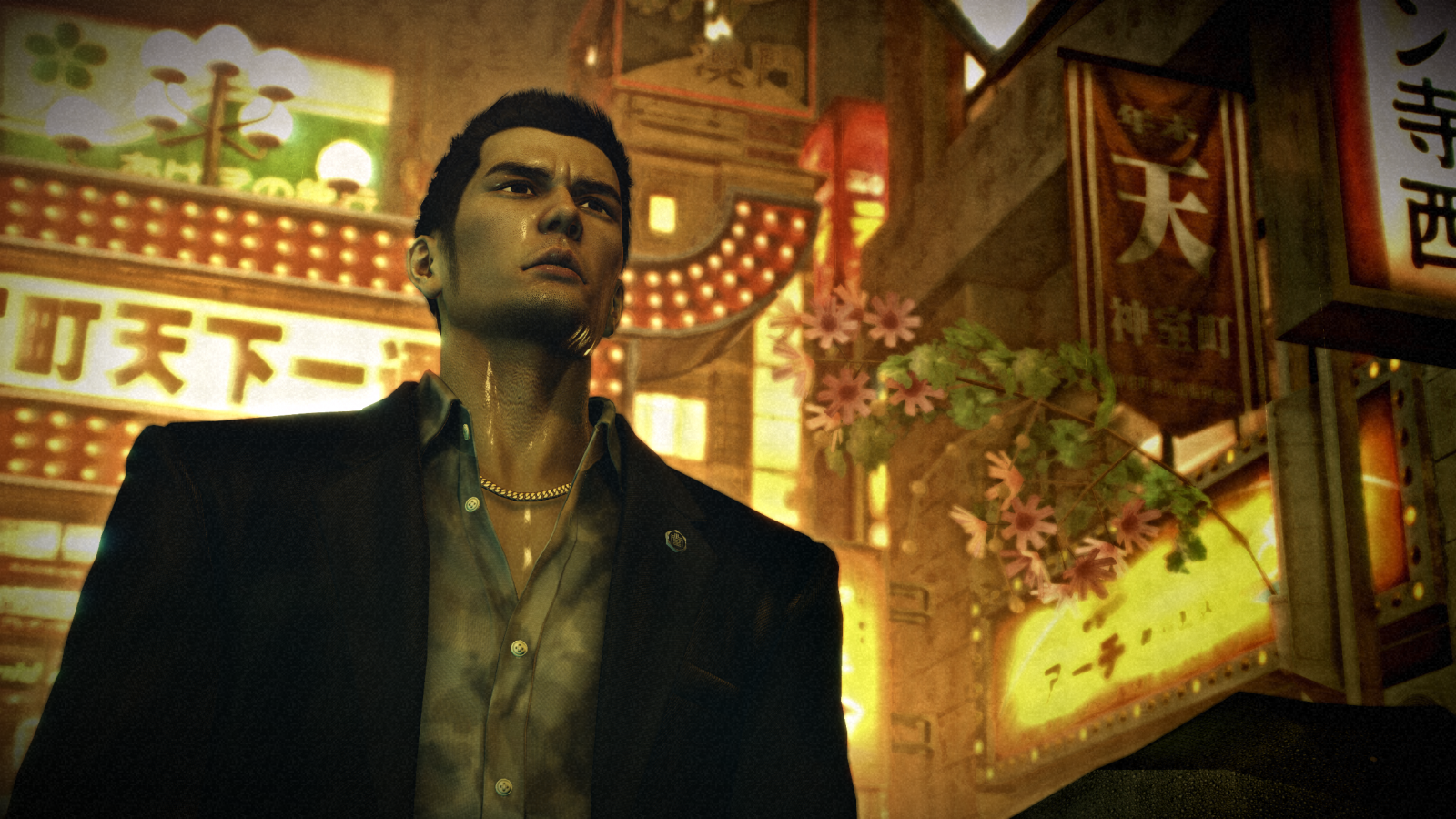 The scenes in Yakuza 0 are beautifully done!

The combat isn’t quite as enjoyable as the story, but it is still fun. Kiryu and Majima each have three different combat stances they can switch between at will. Kiryu has his Brawler style, Rush style, and Beast style. Majima has his Thug style, Slugger style, and Breaker style. These all feel drastically different from each other and swapping between them is important to handle different combat situations. It’s also important to note that the Breaker style is very much based on break dancing and that’s rad.

The only downside to the combat is just how often you will be fighting. Thugs pop up all over the place, and while you can run away and ignore them, it’s just easier to beat them up. The street thugs don’t offer any real challenge and you get some money for the trouble. The only person you have to watch out for is Mr. Shakedown himself. Mr. Shakedown is a large man who will beat you up and take some of the money you are currently carrying, so you have to keep an eye out for him when you are rolling around with a bunch of cash. 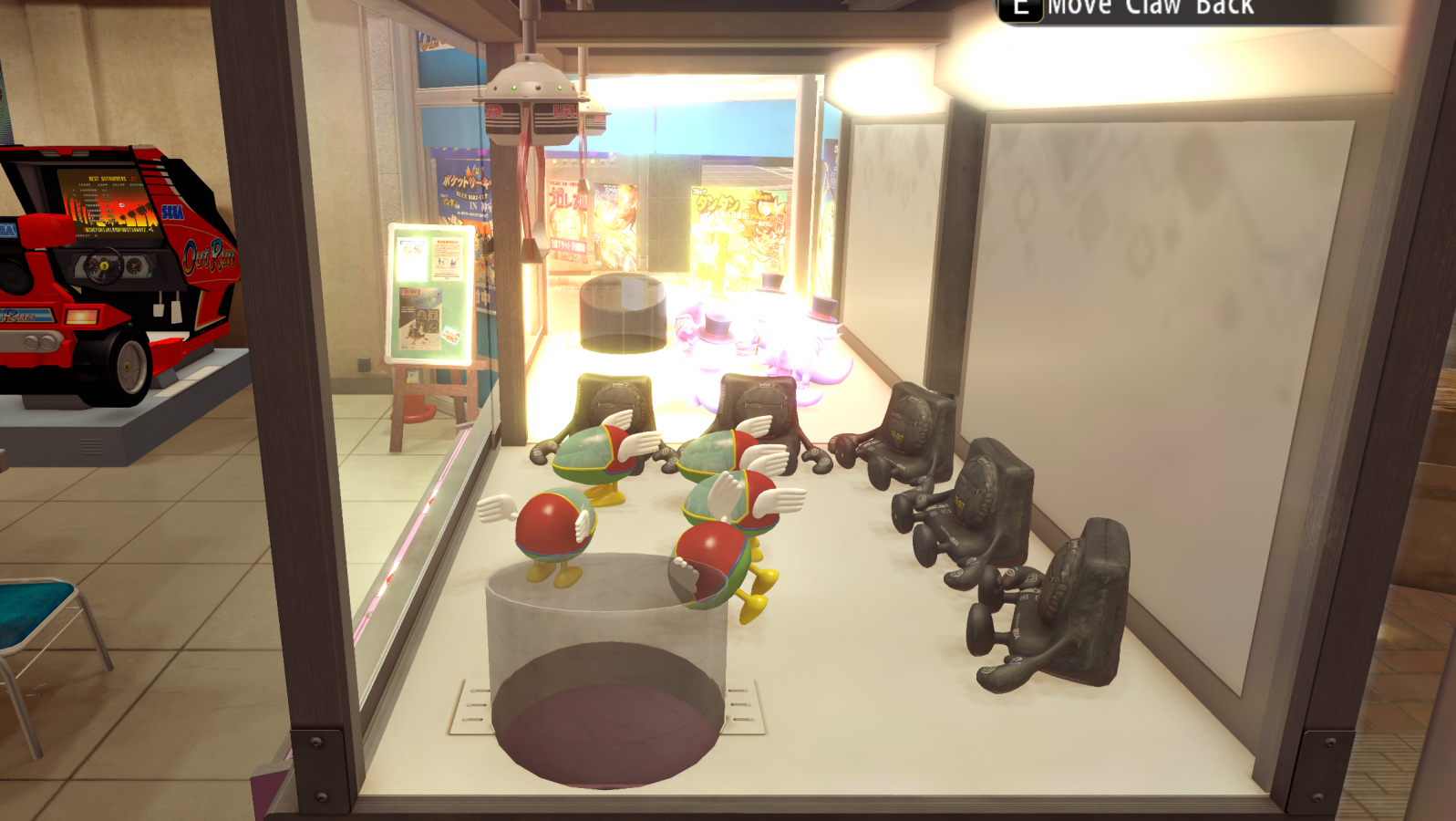 If only I could win these things in real life!

There are a few things you can do to make these fights go by faster, such as buying weapons to dish out more damage until it breaks. Did you know a sword breaks after hitting someone with it a handful of times? In the end, though, I found myself running from more and more of these fights as the game progressed and I just stopped caring about them.

Along with weapons, you can also buy some armor that can protect you from attacks and some also offer unique abilities. They can increase how fast your Heat gauge rises, slow how quickly it drains over time, allow you to switch styles faster, and plenty more.

That Heat gauge is pretty important. It allows you to unleash devastating Heat abilities such as picking up a dude by the waist, raising him over your head, and smashing his face down on the ground! This totally doesn’t kill him. We are the good guys after all! I mean, we want to be part of a crime family, but we are the good criminals! All of these attacks are crazy and I never got bored of watching them play out, especially since they have unique attacks for each style. 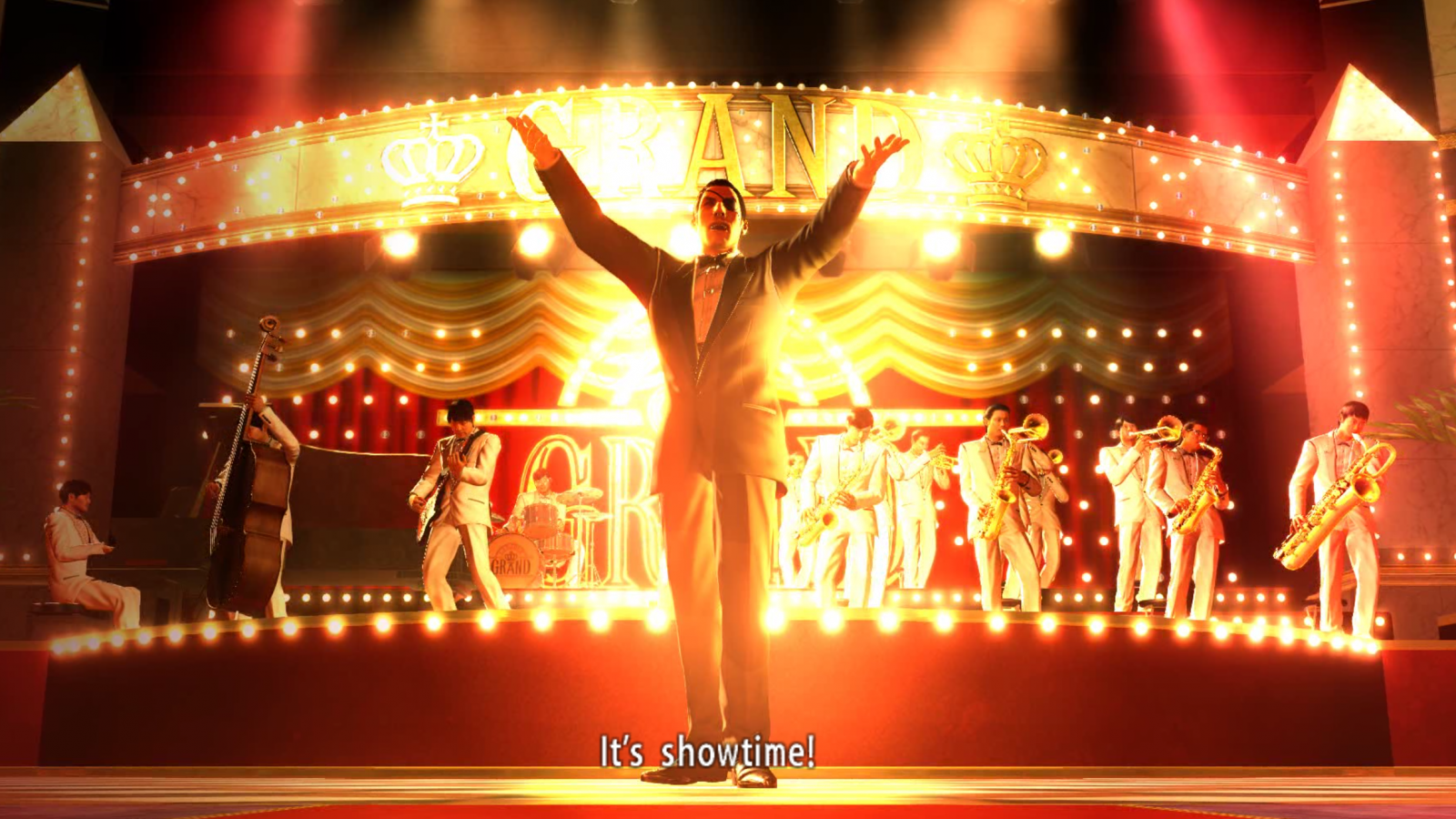 The characters are always interesting!

When you aren’t fighting thugs, it’s good to just take a walk around town and enjoy the sites. Grab telephone cards to give to Mr. Libido. Help a punk band actually be punks. Teach a dominatrix how to do a better job humiliating her clients. Or maybe shutting down high schoolers selling their bras and panties is more your thing? The side quests in Yakuza 0 are absolutely wild and this is just a small taste of them. These are some of the most memorable side quests I’ve ever experienced and I’m going to be playing again to partake in the ones I missed during my playthrough.

You have to keep an eye out for these quests because they are pretty easy to miss. They aren’t just listed on the map for you to run to. You have to explore the map and find them yourself. I can see how some would find this frustrating, but I love it! It encouraged me to explore and helped me become familiar with the different locations. 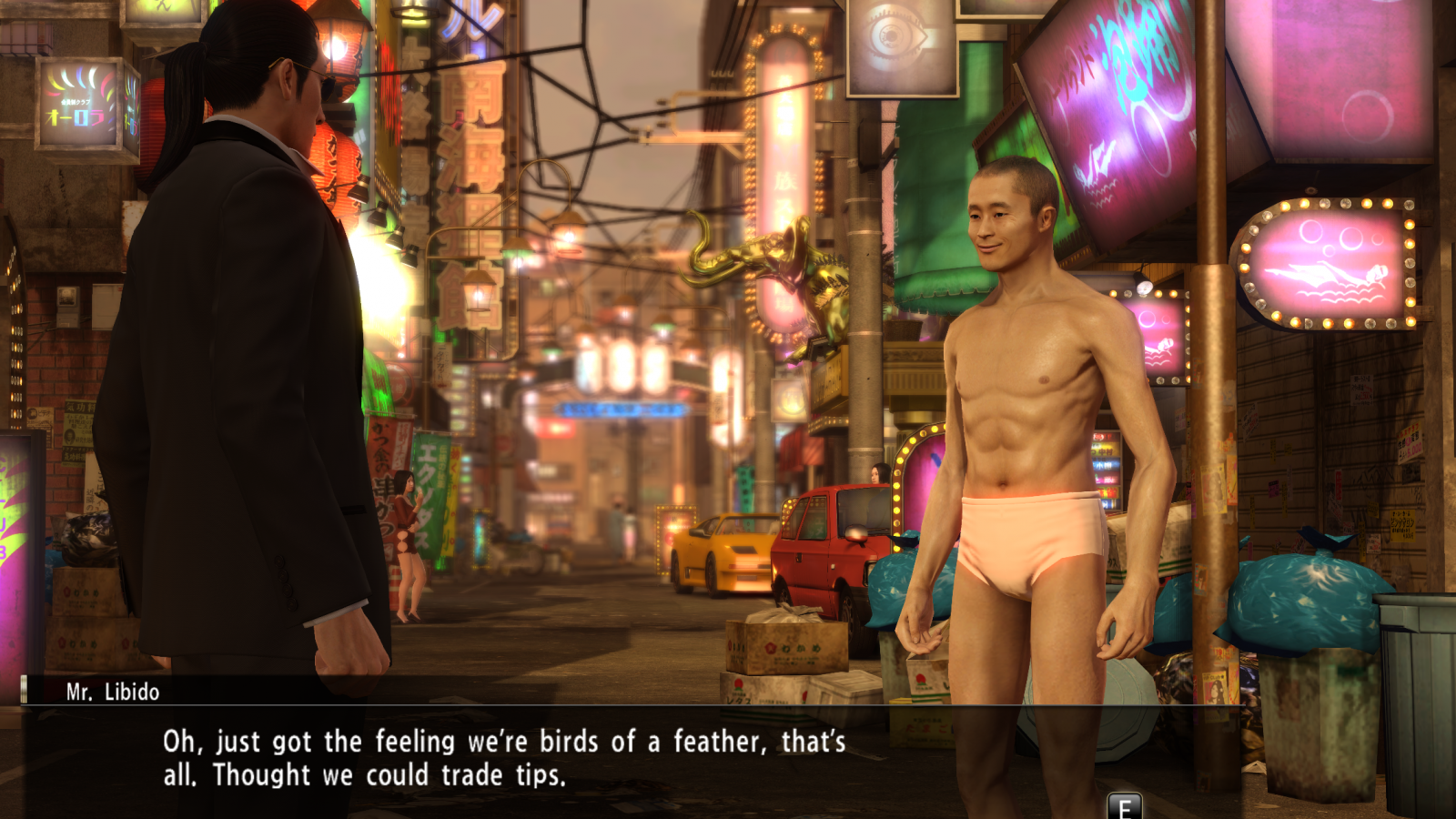 I don’t think I want to trade tips with you. Of any kind.

Later in the game, another activity you can do is look around for properties to buy so you can try to take on The Five Billionaires who are trying to carve up your home and sell it for a profit with no care about the people who live here. This is also why side quests are important, some of those people you helped will return the favor and offer their service in acquiring, upgrading, and protecting different properties. This is a fun little game within the main game as I always enjoy it when a game lets me go around buying properties and making money while doing it.

If you have never played a Yakuza game, Yakuza 0 makes for the perfect entry point. It introduces a host of wacky characters and starts the journey of Kiryu that certainly doesn’t end here. Beyond that, though, Yakuza 0 is just a damn good game, and that’s rad.

If you have never played a Yakuza game, Yakuza 0 makes for the perfect entry point. It introduces a host of wacky characters and starts the journey of Kiryu that certainly doesn’t end here. Beyond that, though, Yakuza 0 is just a damn good game, and that’s rad.

Austin Fern has been playing video games his entire life. The first console he truly fell in love with is the PlayStation 2 with Sly Cooper, God of War, and many others really leaving an impression. He enjoys all genres of games from FarCry 5 to Danganronpa and everything in between.
Related Articles: Yakuza 0
Share
Tweet
Share
Submit