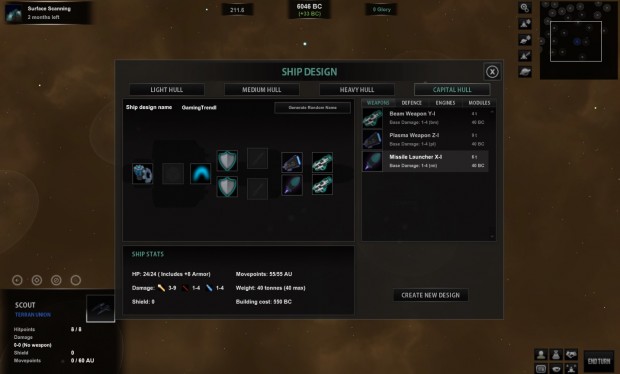 When I first heard about this game, I immediately looked it up and read the words “4X Turn-Based Strategy Game set in space.” I was also immediately interested, as that description has all the things I love in my games. I like strategy, I like space, and some things about it sounded interesting. I’d just recently come off of having quite a bit of fun with Civilization: Beyond Earth and I couldn’t find a reason why I shouldn’t check out something similar.

I found myself opening the game for the first time a few hours later, excited. The initial experience should’ve been my first warning of what I was in for. It takes more than a minute or two just to load to the main menu even on stronger systems, and that’s not counting the intros. Still, I generally just zone out for such things, so I didn’t pay it much mind. I just reset the graphics as the resolution hadn’t been set to my monitor’s native settings.

Another warning of what was to come, I had to restart the game to apply my graphics settings. This is a frustration I don’t commonly have to deal with unless the game happens to be a port (which this isn’t), so I was a little bit annoyed as I restarted the game and sat through the long initial sequence yet again. Finally, after all of that, I try to start up a game. The varied options for races to play as greeted me and for the first time the game started to show some promise.

I’m boring so I went with the humans (or “Terran”), set up a few options for my game (there’s no campaign, but I usually don’t expect one from this type of game), and went on my jolly way. There were a few caveats I noticed of course, the worst of which was that there are two victory conditions in the game. Just two. There’s a research victory and a combat victory. I frowned at how generic and unimaginative that was, but I didn’t realize then that that was the kind of experience I was in for.

This game feels like it was taken off of a production line of generic phone games (it’s a thirty dollar PC game, however). The scenario presented completely lacks imagination or originality. The sun is dying so the humans get transported by an alien race to another dimension… or something. The voice acting for the intro was average to say the least, but more importantly it was forgettable. I put it off, however, I thought it was just an excuse to get to the gameplay. I thought that the developers just wanted to focus on the pure enjoyment of the game itself.

I was wrong. The game is just as generic as its artwork, main menu, and everything else I had experienced suggested. That’s not even to mention that the games little text has typos and grammar errors, like they didn’t even bother to have anyone proofread it. Nothing too horrible, no, but yet another in a long list of small annoyances too long to list here? Yes.

That’s not to say the game is completely lacking imagination. There are some genuinely good ideas around the basic 4X gameplay here… the problem is that they are all unfinished and unpolished. The attempt at dynamic events effecting diplomacy is good, but it only does it in a very indirect fashion and these events aren’t very common. The ability to create your own ship designs is awesome, but your options are fairly limited and for some baffling reason you can’t edit existing designs.

You can design ships, but your options are quite limited.

The ability to designate certain domestic policies (free government healthcare, free use of deadly force by the police, etc.) is great, but there really aren’t that many things to change, and it’s all very black & white (there’s even what is basically a karma bar that dictates what type of government you have). You can give speeches to your people, but they only give gameplay benefits and you need to spend a resource to do so.

There are also some larger fundamental issues. The game does a poor job of explaining itself in many ways. The research tree is extremely small and limited. This can lead to some extremely speedy research victories, sometimes resulting in a game that is completely free of combat. That’s not even that much of a problem, though, because the combat is a generic grid-based system. Ships have range, move and shoot with X weapon. The game doesn’t even outline unique benefits for using each type of weapon (lasers, missiles), or at least it never did for me.

You have plenty of intrinsic options to manage your empire, but they’re all skin-deep.

Then we have the graphics. I’m not usually a graphics junky, but I was astounded at how lackluster the game looks. I would again like to reiterate that this game is thirty dollars. Yet if you zoom in on anything, be it your ships or the planets themselves… whatever luster they had quickly fades away. The models lack detail, and the textures and colors are terrible if not non-existent. This makes combat even less exciting, especially as the weapon animations and sounds are barely there.

None of this is to say that the game lacks any redeeming qualities. The soundtrack is fantastic, even if it just doles out random tracks instead of reacting to the gameplay and, as I’ve already said, the game has some truly fantastic ideas that would add to the game if the developers had just thought bigger. It’s not that the game is entirely bad, it just lacks imagination and shows a clear lack of effort. It feels phoned-in in the worst of ways, or rushed to meet a deadline before it was ready.

It’s also a game undermined by it’s very foundations, where even the smallest of things can have an issue with it. You can’t rearrange the building queue in your colonies, the quality of the artwork varies a bit… I could go on for a while. Overall, I’m not sure where this game went so wrong with so many cool ideas to capitalize on.

Lords of the Black Sun

From diplomacy to war, there are far better games to occupy your time in this genre even if some are getting on in age. There are some fantastic ideas with some really great potential, but you can’t build a game on potential. Eventually, you need to go somewhere with those ideas… and Lords of the Black Sun doesn’t.

My name is Niko, I'm currently 20 years old. I spend most of my time on my computer gaming as I got hooked on videos games from a young age. While my first experience with video games was with the Gameboy Color, I first got seriously into games while using the original Dreamcast and the PlayStation 1. I played many games back then, but the highlights were definitely Pitfall 3D, Pokemon Blue, Rayman 2, and Ecco the Dolphin Defender of the Future. All games that I spent many many hours on and filled the long hours where I stayed at home mostly by myself thanks to living in unsavory neighborhoods. From then on, I pursued a lot of video game consoles. I was particularly enthralled with the Super Nintendo and Nintendo 64. As I grew up further, my tastes shifted and I tried more and more games, especially after I got a PC. My first experience with a PC RPG was Star Wars Knights of the Old Republic, and it was really the game that made games an integral part of my life. I played video games a lot back then, but ever since playing KOTOR I've been a lot more opinionated and interested in games. I even entertained the idea of wanting to be a developer at multiple points, but I just didn't have the skillset. Still, KOTOR ignited my interest in video games as a way of telling stories. I loved the ways video games could tell such large and complex stories, combining the best parts of every other medium of entertainment with the unique pieces of what video games themselves offered. Now, my favorite genre is definitely RPG's. With my primary interest being the story driven ones. Though, I still enjoy my occasional shooter and action titles I enjoy mostly great cinematic titles with good stories. Though I also enjoy the Stealth, Strategy, and Action-Adventure genres quite a bit. I also think that the PC is a wildly superior platform to any console, due to the wide variety of options. Whether it be in graphics, mods, or the selection of games themselves.
Related Articles: Lords of the Black Sun
Share
Tweet
Share
Submit