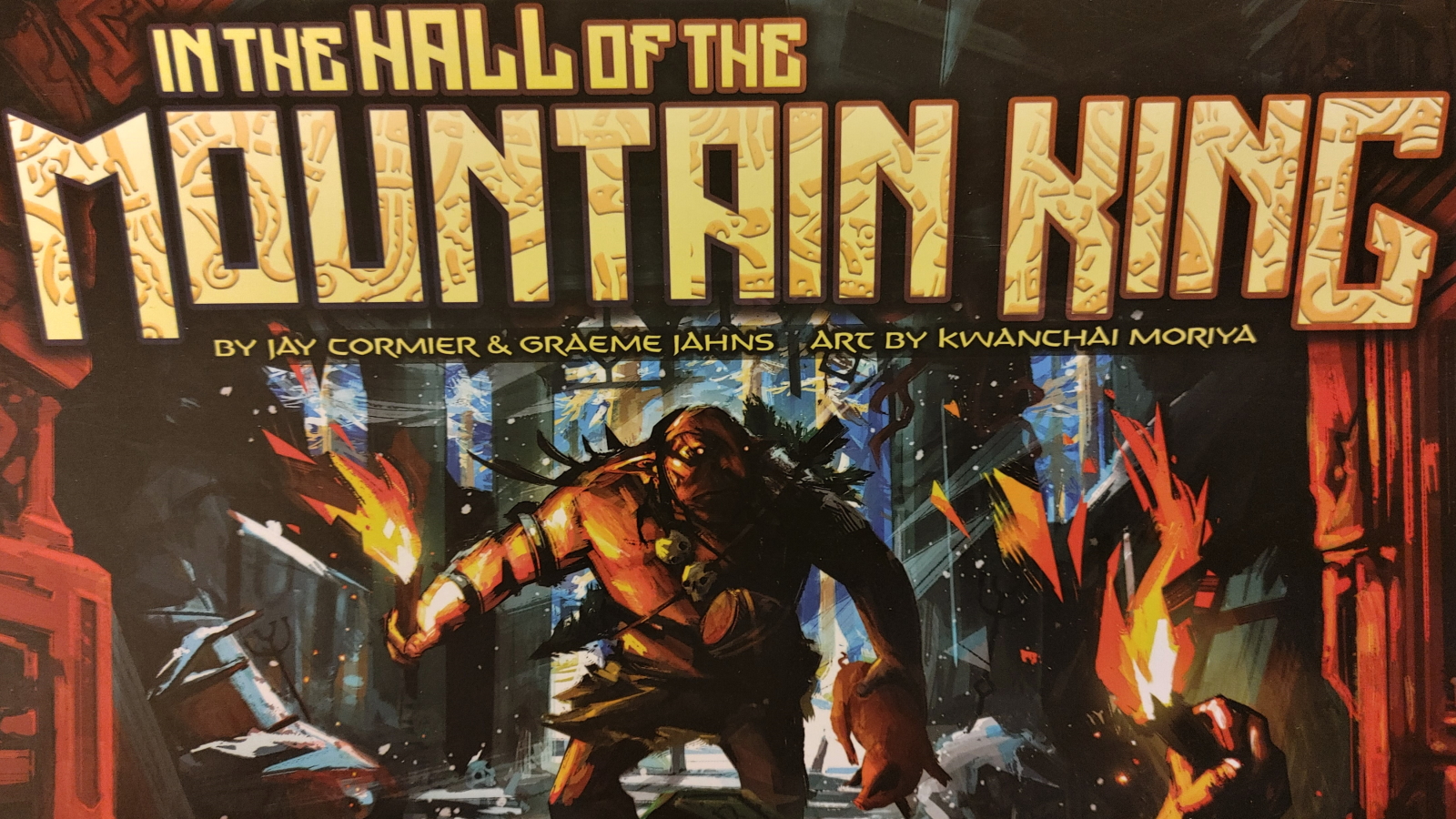 The ancient mountain, the ancestral home of the trolls, rumbles and the tunnels within crumble. The usurping gnomes within have fled, and the trolls heard the heart of the mountain calling, calling them home.

In the Hall of the Mountain King is a tile laying strategy game for 2-5 players, developed by Jay Cormier and Graeme Jahns, and published by Burnt Island Games. In it, you lead a troll moot, gathering together the strongest trolls to dig tunnels, cast spells, build workshops, reclaim ancestral statues, and dedicate great halls.

There are 7 resources in the game. Stone, iron, and heartstone allow players to make tunnels, with more points given for higher quality resources. Hammers allow players to break down debris, making way for those tunnels. Runes let players cast powerful magic spells. Carts let players move unearthed statues around their tunnels, potentially into places worth more and more points. Finally, coins are the currency of the trolls, which is needed to bribe trolls from the horde to join your troll moot. 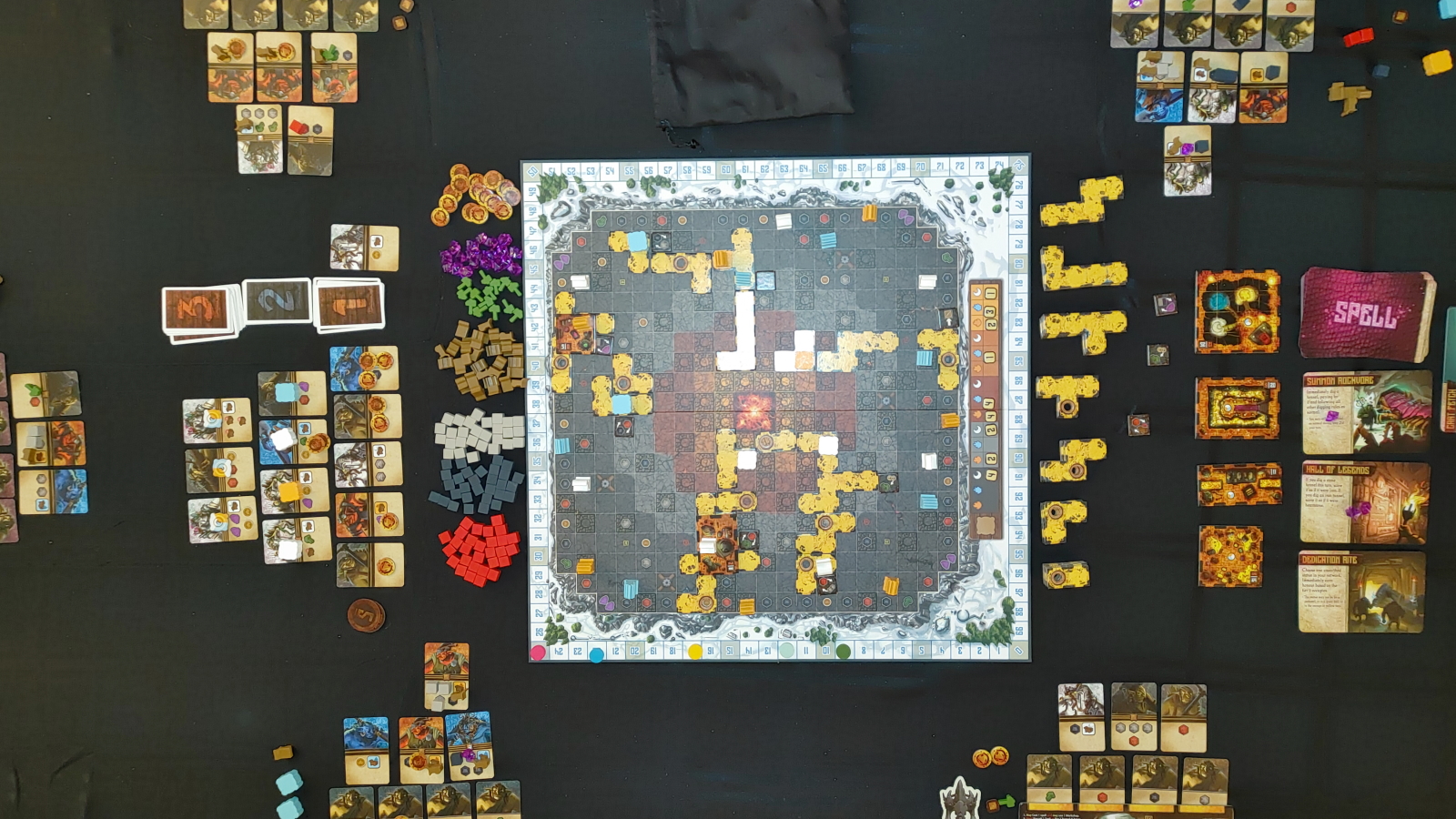 Each turn, players will choose to activate a spell for the cost of one rune, use workshops based on how many walls are open to their own tunnels, and then choose whether they want to build a new tunnel, or gain a new troll. This decision is a momentous one, and must be made each and every turn.

Choosing to make a tunnel is the primary method of gaining points, and opens new paths to victory. You can spend stone, iron, or heartstone to make a tunnel equal to the amount of that resource spent, with larger tunnels and better resources scoring more. Building tunnels can unearth statues and resources, and unlock workshops, as well as digging deeper unlocks more and greater point scoring opportunities. 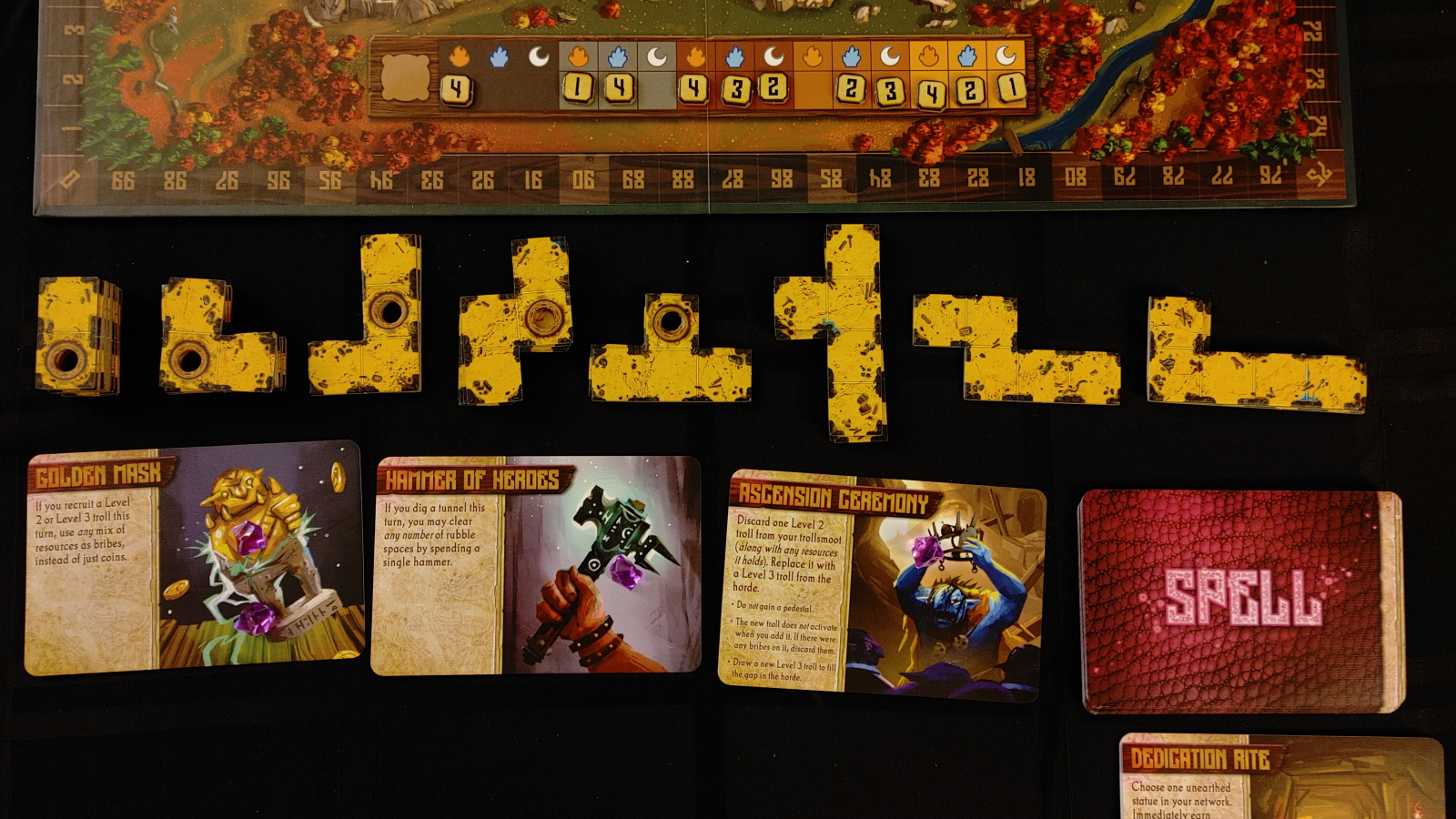 Meanwhile, adding new trolls to your moot is the primary method of gaining new resources with which to score those points. You see, when you add a new troll, you put it on top of other trolls in your troll moot in a pyramid, and each troll underneath will produce resources. These resources will live on the troll card that produced them until used or otherwise moved. This means that you need to try to clean up your trolls before recruiting new ones, so as to not waste potential resources. To recruit a troll, you have to bribe the trolls underneath it in the horde, as trolls apparently don’t like changes in management. This means that level 2 trolls cost 2 coins, and level 3 trolls cost a whopping 5 coins. Of course, as compensation, these higher level trolls bring with them altars, which can add additional scoring opportunities as you’re digging tunnels ever deeper.

After making your big decision for the round, you clean up by dedicating great halls and spending carts to move statues around. Great halls are unique, and score large numbers of points, but have to be placed on top of existing tunnels. Moving statues is important, as statues further in the mountain score for more. You can also put statues in great halls, or on top of altars for even more points. 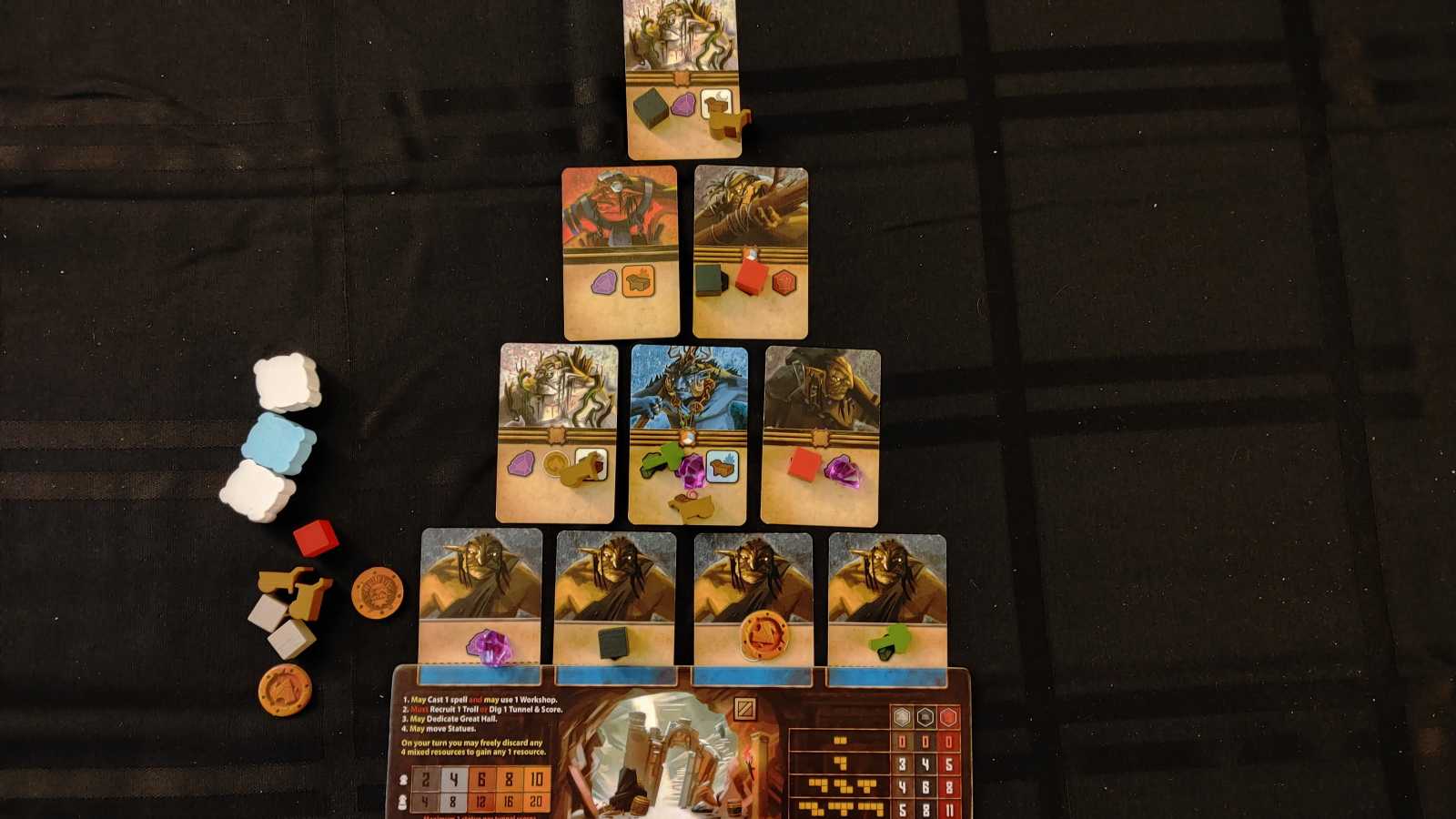 It’s a lot to keep track of, but since there’s really only one or two big decisions to make each turn, turns tend to move along nicely. Placing tunnels always nets you a bunch of points and puts you in a better position overall, while grabbing a new troll gets you a cascade of new resources, which always feels great. The different array of workshops and spells available each game can shake up how you approach each game, and each starting position is slightly different.

The game has a beautiful artistic turn to it, with your trolls looking less like monsters and more like intense work-men and warriors. These are trolls I’d like to share a drink with. The iconography is very clear as well, with each piece looking significantly different from each other, though I do worry about red color blind folks differentiating stone and heartstone. The components themselves are quite lovely as well, with the cards feeling durable enough to withstand long-term play, and the wooden and plastic resources are charming. 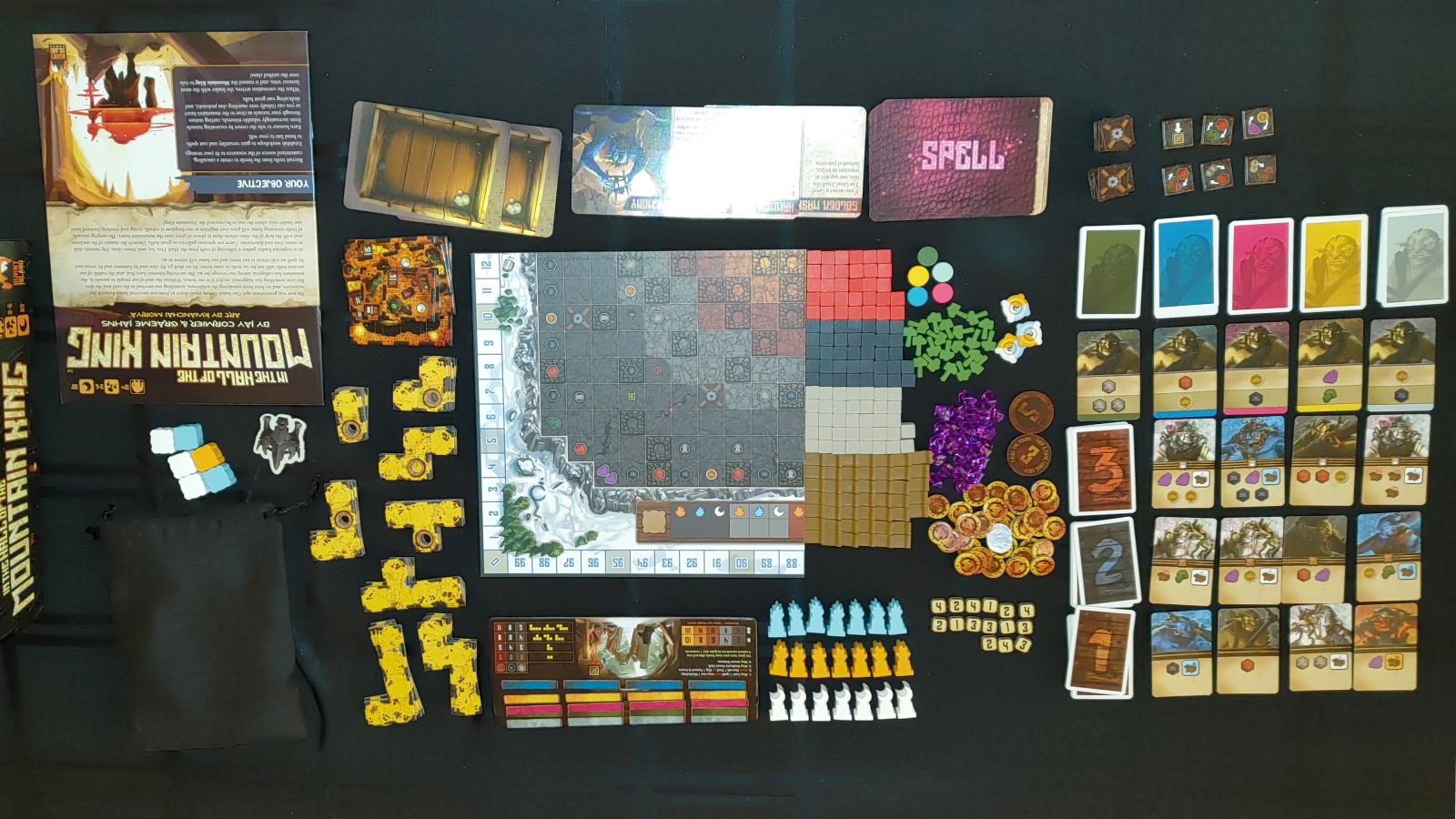 On a personal level, I do wish the board was just a little bit smaller, forcing players to collide and compete earlier. As it was, the only real points of contention were in the last few turns as each player pushed their tunnels closer and closer to the center of the board. There is a smaller board on the back of the first one, but it’s only set up for 2-3 players. Having the option for an absolutely brutal 4-5 player game on that smaller side would have made for some very interesting play. I also wouldn’t mind having a few more spells to cycle through, as I saw almost all of them in a single game.

Another issue is how much tabletop real estate this game takes up. While the box it comes in is average sized, when all spread out the game takes up a very good sized table, with players sometimes forced to move their troll pyramids to the side to compensate. Overall, I very much know that this game is going to wind up in my collection to be brought out again and again.

In the Hall of the Mountain King

A tile-placement game with an enticing pyramid shaped economic system attached. Each turn has something exciting to look forward to, and every game is unique. A lovely gem of a game, though it does take up a lot of space.

Unpublished game designer, programmer, DM and progressive activist. Always willing to see what cool ideas people have in the board game industry. I love a good gimmick, but strong mechanics are still important.
Related Articles: In the Hall of the Mountain King, Tabletop
Share
Tweet
Share
Submit