In theory Necromunda: Hired Gun has the potential to be a really cool first person shooter, the Warhammer 40k universe already has all the trappings of a modern first person shooter present and accounted for after all. Big grizzly super soldiers who sound like they swallowed a fist full of gravel for breakfast whilst also wearing the full contents of a hardware store? Check! Massively over compensatory boom sticks? Yep! Dimly lit miserable grey-brown environments that look like a tornado tore through a scrap yard? Absolutely! So given that half the ground work is there already it was somewhat disappointing that Necromunda: Hired Gun manages to be entirely less than the sum of its parts. That may be giving the review away in the first paragraph but let me explain…

Set on the hive world of the same name, Necromunda: Hired Gun has you assume the role of a bounty hunter who is accompanied by his trusty dog, a cyber-mastiff which is a pretty cool looking companion to be honest; on mission to claim the bounty placed on… someone who murdered… Someone? In any event, the mission goes sideways and you along with the other hired guns you had been working with on this mission, all get shot to bits. Those guys are dead but you wake up after having been rescued by some dude you clearly have some history with who took it upon himself to have you souped-up with cybernetic bits and bobs while you were unconscious and from that point on, reluctant adventures ensue. If it seems like I am glossing over things, that’s because I felt the game was doing exactly that. The entire story felt schizophrenic, darting from one plot point to the next, throwing characters and different factions into the equation like the player already knows more about this world than the game itself cared to explain to any satisfaction. Pretty early on I gave up caring too much about what mcguffin I was supposed to be chasing or what I was supposed to be doing and just wanted to get to the next round of shooting the dudes in the next grey-brown scrap yard. 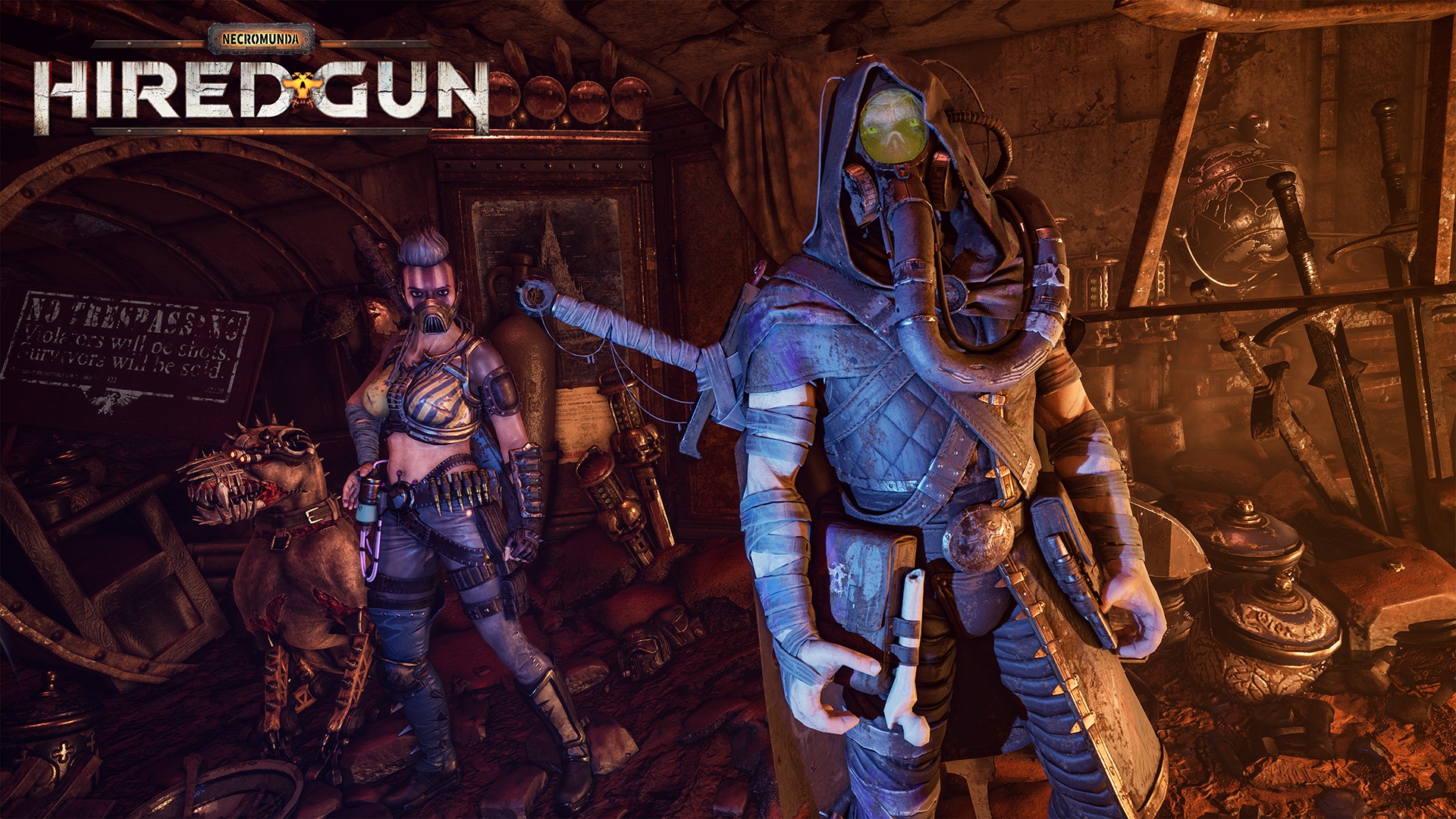 Gameplay itself shows some moments of genius at times only to be dragged back down under the weight of its other elements. Necromunda: Hired Gun is a fast paced, action packed shooter which many have compared to Doom: Eternal and while I can totally see that similarity, personally I would liken it more to the illegitimate offspring of Doom 2016 and Titanfall 2. You have take-down moves at your disposal which allow recovery of lost health but these actions don’t feel nearly as fast or punchy as the glory kills found in Doom. You are invulnerable while the take-down animation is running and whatsmore you are not required to whittle down the enemies health to any degree before you are able to perform the move. This leads to situations where if those take-downs all work as intended and you find a nice clump of enemies together, you can just run from one to the next hitting the magic “kill the dude” button and just plough through whole areas that way. I say “if” the action works as intended because on numerous occasions I would attempt to take-down a target, the prompt would appear and then just as quickly disappear leaving me to hammer the action button like it owed me money trying to get the damned move to trigger.

Additionally Necromunda: Hired Gun puts a focus on mobility. Much like Titanfall 2 you have a grappling hook used to zip quickly from point to point, a double jump, a slide and also a wall run ability. While all of these things do work after a fashion, none of it feels nearly as smooth as it does in Titanfall. The double jump is fine as is the grapple when used in isolation, the slide however seems to feel floaty (yes, that is the technical term) and disconnected from the player and the wall running… Well, that just felt clunky and cumbersome. You see in Titanfall 2, Doom, Doom: Eternal and several other games the additional abilities present to aid mobility just came naturally. You’d learn how to use them and then after a short adjustment period, you would be zipping and bouncing all over the place by reflex. Necromunda: Hired Gun however always seems as if it’s tripping over itself like the fat guy with two left feet trying to dance the waltz for the first time. 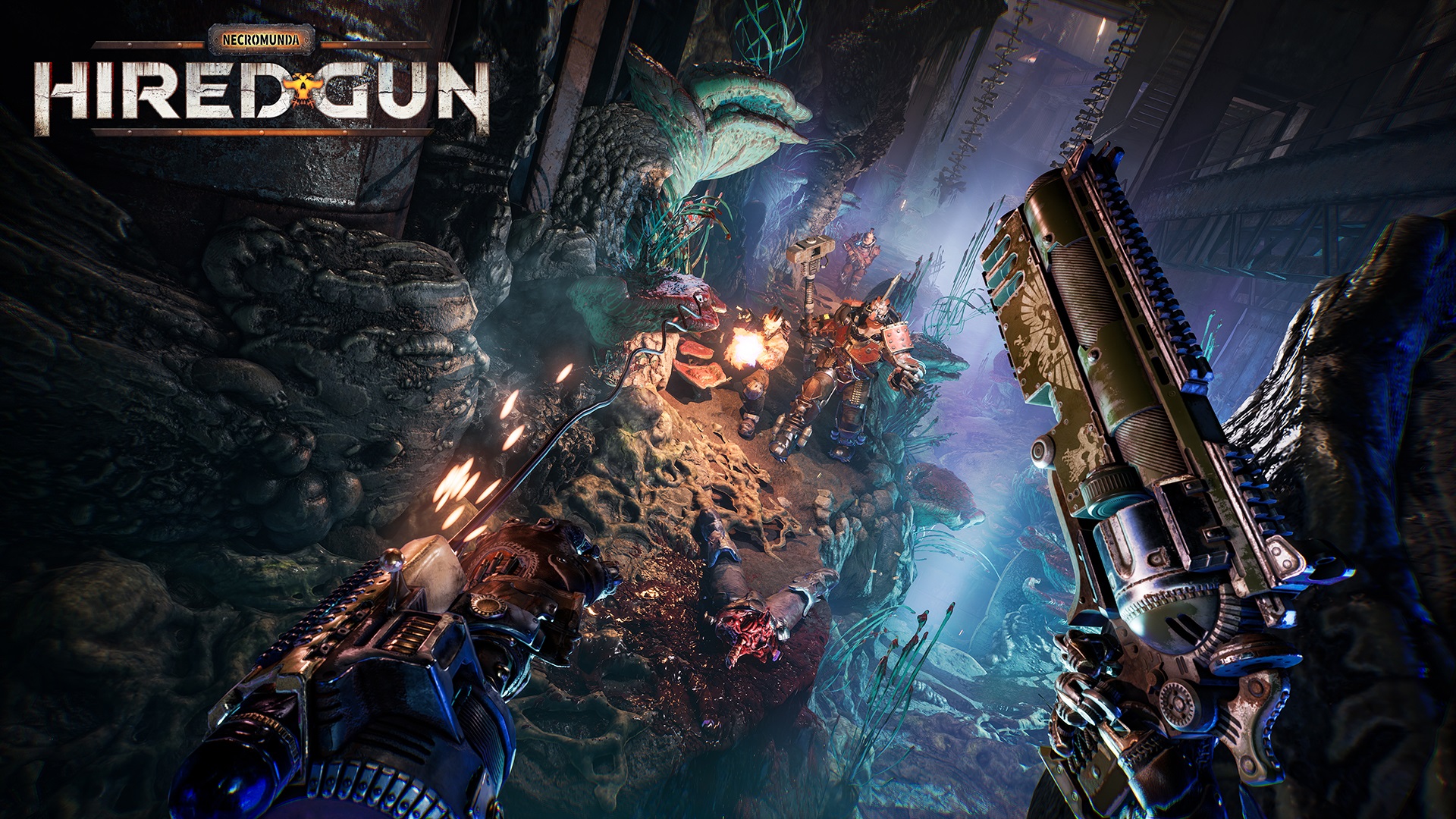 There are several RPG-like elements present in Necromunda: Hired Gun allowing the player to tailor the abilities of both the hired gun and their dog (yes you can pet the dog) along with customizing weapons, all at the cost of credits. Now this does add a bit of flavour for sure and you unlock some pretty handy upgrades from increased health or damage resistance, better speed or agility and powerful abilities like the one to slow time down or send a blast out at enemies. The thing is that all of this breaks the flow of things a lot when you’re stopping in the main hub after each mission to make sure you’ve min-maxed all your weapons with various buffs and alterations, checking if there’s anything else you can upgrade on your cybernetics, checking the dogs cybernetics then making sure you’re stocked up on health packs and stims. I end up wondering when the powerpoint presentations will end so that I can get back to shooting the dudes.

Speaking of the dog, your companion can be helpful as a free “make that dude go away” button, sicking him on to enemies can help you out of a jam for sure but that isn’t nearly as handy as his free “Highlight the dudes” function. When the dog is not on cooldown and you summon it, enemies in the area are highlighted in red. This is an absolute lifesaver given that enemies who are dressed largely in old motorcycle parts and kitchenware, become prone to blending into the cluttered scenery better than the Predator would in a dense jungle. Unfortunately I think the enemy dudes must also have cyber-dogs, except theirs don’t seem to have a cooldown because they can spot me immediately upon entering an area. Literally, I enter a place high up on a ledge above the NPCs under cover of shadow, quiet as a mouse and BOOM! They see me and start shooting. It reminded me of getting shot down while hidden behind a bush which is behind a shed, by a one-eyed guard 5 miles away armed only with a pistol in Far Cry but at least that game had the excuse of the loud Hawaiian shirt.

I really like the setting of Necromunda: Hired Gun, being the miserable, grumpy git that I am I have always liked the “grim dark” of the Warhammer 40k universe and the game does pull that off well, it isn’t a terrible looking game either if not a bit rough around the edges. On paper, all the elements present in Necromunda: Hired Gun should amount to a decent shooter that brings its own unique take on the FPS genre. In practice though the various parts just don’t mesh together well enough to elevate the game to greatness,instead I am left with the feeling that perhaps this one needed some more time in the oven and some more time getting the edges sanded down.

Some good warhammer 40k vibes can be found here but there’s just a bit too much going on in Necromunda: Hired Gun. The fast-paced FPS gameplay needs refining and is constantly slowed down by the RPG elements which in turn are not allowed to shine through the FPS aspect. I actually think this setting would lend itself more to a Skyrim style RPG more so than a first person shooter but this is what we got and I am actually a bit gutted that I can’t like it more than I do.

Grumpy gamer from UK with a keen interest in retro gaming and modding. Can also be found cycling up and down mountains, walking dogs, watching Sci-Fi and reading all sorts of books.
Related Articles: Necromunda: Hired Gun
Share
Tweet
Share
Submit