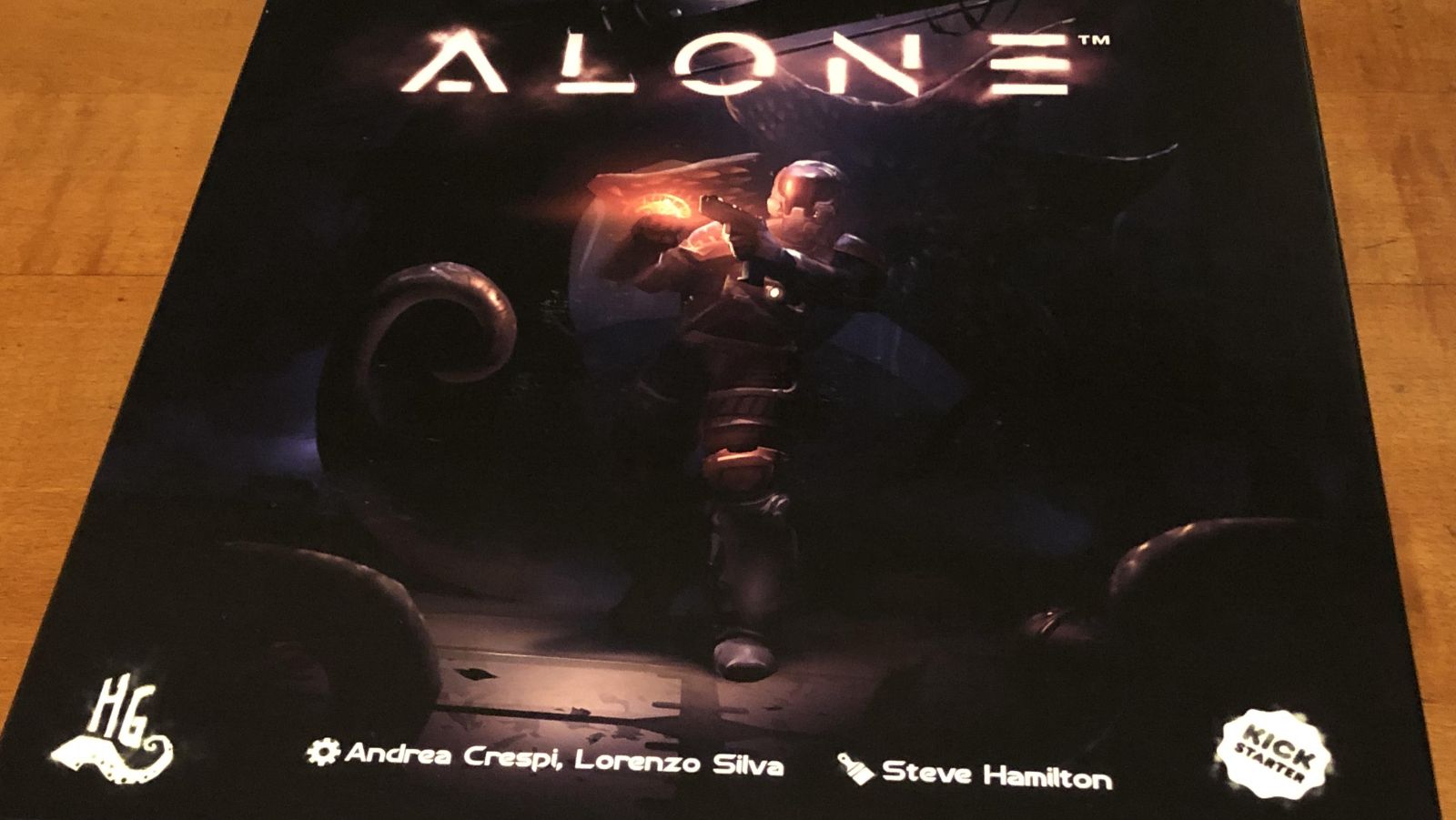 Typical dungeon crawlers and RPGs pit you and your fellow party members against a horde of enemies controlled by a game master — a single overlord or game engine controlling the forces of evil against multiple adventures. What if that formula was reversed? What if multiple people controlling the forces of evil went up against a single hero? This is the basis for Horrible Games’ recent project Alone.

Alone is reminiscent of the video game Dead Space, where a single character explores a space station to complete objectives and escape with his life. One to three players play as the evil hive mind creating the map, setting up the location objectives, and placing monsters in inconvenient spots. Alone is played across rounds of eight turns each, with the hero winning by completing objectives while the evil players succeed by draining the hero’s life and self control.

To start, the hero player chooses one of four hero characters with special abilities. Then the hero positions a dashboard with tracks for their life and self control, a grid for placing markers where creatures may be, turn and adrenaline tokens, the current round, and locations where enemy reaction cards will go. An item deck with tools for assisting the hero by causing damage to creatures, giving extra movement, or preventing damage gets drawn from in all but the highest difficulty level. Objective cards coming in blue, green, and red get drawn with the blue or green objective needing to be completed before the red final objective can be activated. The objective cards can also give awards when finished, so it may be advantageous to complete a specific objective to trigger the final objectives. These objectives will always be in different rooms, so the hero will need to traverse large portions of the map. 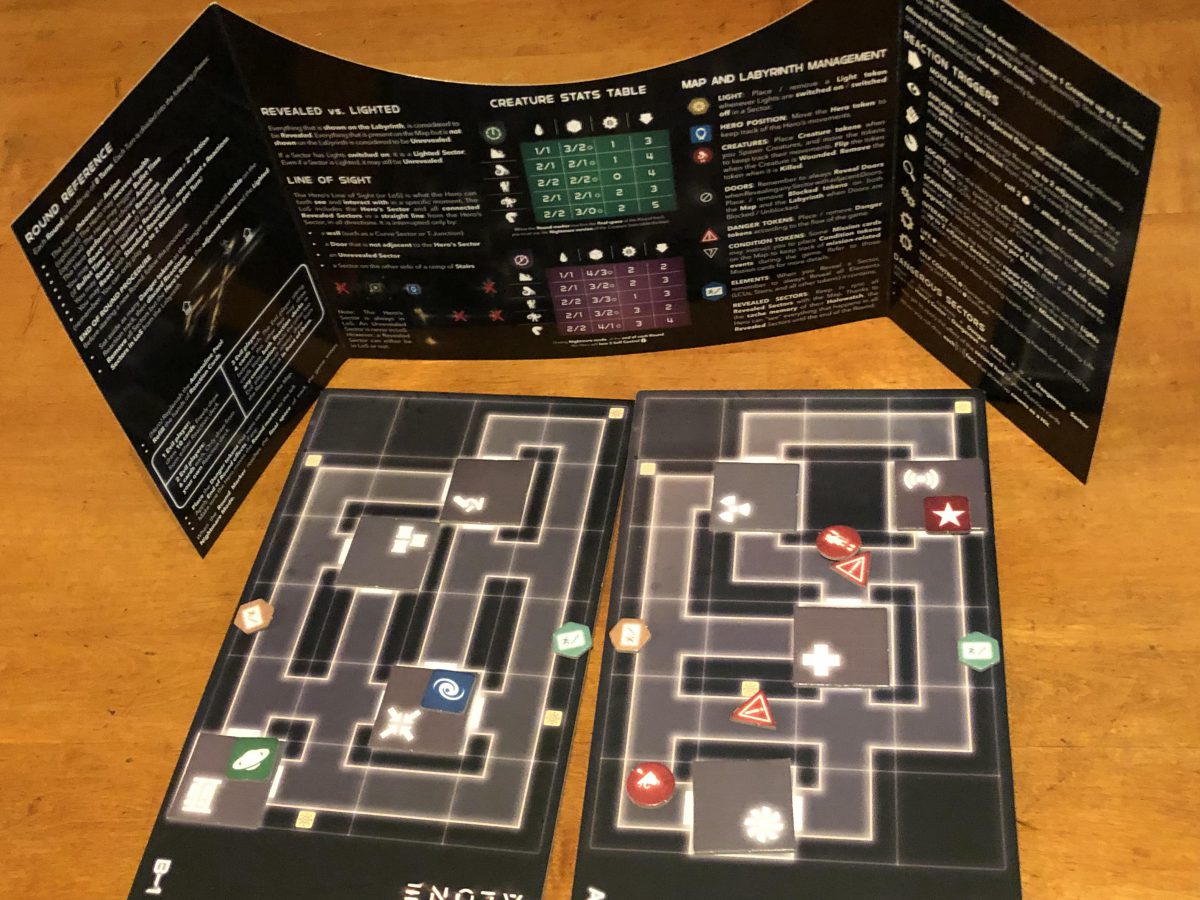 Meanwhile, evil players start to make their plans behind a player screen. Here the scheming begins, with two maps laid out to create a top level and bottom level connected by stairs, reaction card decks are chosen, rooms get assigned, all towards the goal of making the hero’s ability to complete the objectives more difficult. On the map boards two creatures and several danger tokens are placed. Finally, a starting location gets chosen by the evil players and they set out the starting tile in front of the screen with the hero’s figure on top. Now the game begins.

The hero can perform several actions like move, interact, scavenge, fight, locate, and explore. Interact lets the hero turn on lights, while explore lets the hero get the layout of the map in a specific direction up to two sectors away. Explore isn’t necessary to perform to move into a location, but if you don’t you may get surprised by a monster and lose self control. Locate acts as a sonar that gives the hero the number of sectors between the hero and a declared target. The evil players must be truthful with the information asked about during a locate action, unless they have a card which they can play in response to fudge the answer a bit. Any of these actions can be done by the hero player without restriction, and each one takes a single action. Each round the hero gets a certain number of adrenaline which can be used to perform a second action or regain life or self control. Adrenaline replenishes at the beginning of a new round, and the number of adrenaline tokens given corresponds to life and self control the hero has left. 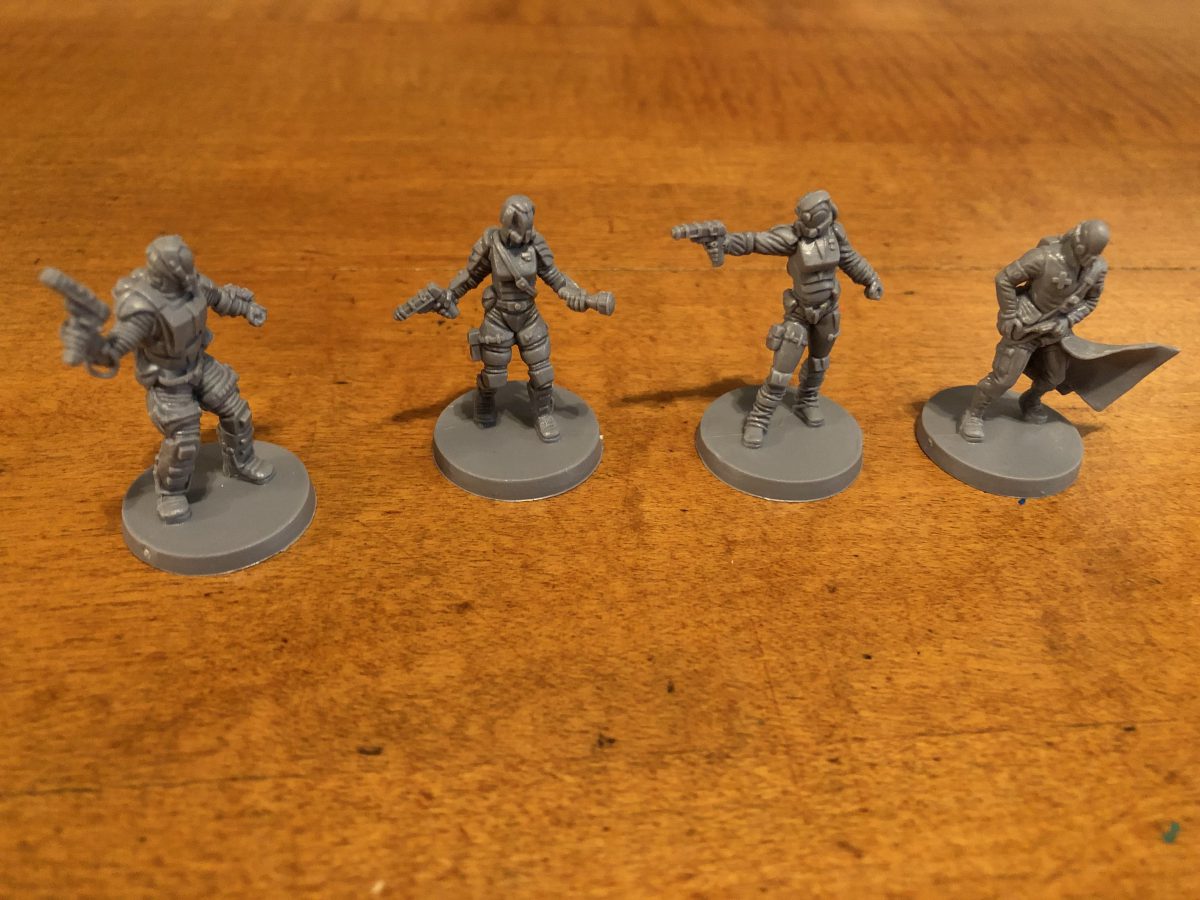 After the hero declares his action, the evil players spring into action. They lay down the revealed sectors, indicate any noise and the direction it came from, and show any new lighted sectors. Both the labyrinth in front of the player and the map behind the screen has to be continuously updated. These parts can be a bit tedious, and the line of sight and noise rules can be a bit confusing until you are used to them.

The evil team gets to discuss what they are going to do amongst themselves, and if they like, play reaction cards. These reaction cards can give them extra bonuses or can be used to spawn new monsters. Any time a monster gets spawned or moves on the map, the evil players must let the hero know which direction it is coming from. Four different decks of reaction cards come with Alone, with two used during the game. Each deck has a theme, from making creatures stronger, making them move faster, making it easier to scare the hero and lose self control, and setting down danger tokens. When a reaction card is played, it goes along the reaction track at the top of the hero sheet. If a reaction card gets played face down, it means that a creature has moved a sector or a new creature has been spawned on the map. Only nine spaces are available for reaction cards along the track. Up to two reaction cards can be played by the evil side for each turn taken, but when the second card gets placed horizontally taking two spots in the reaction track. Reaction cards can’t be played without spots available on that track, and if the later spots are empty evil gets danger tokens to place on the map. 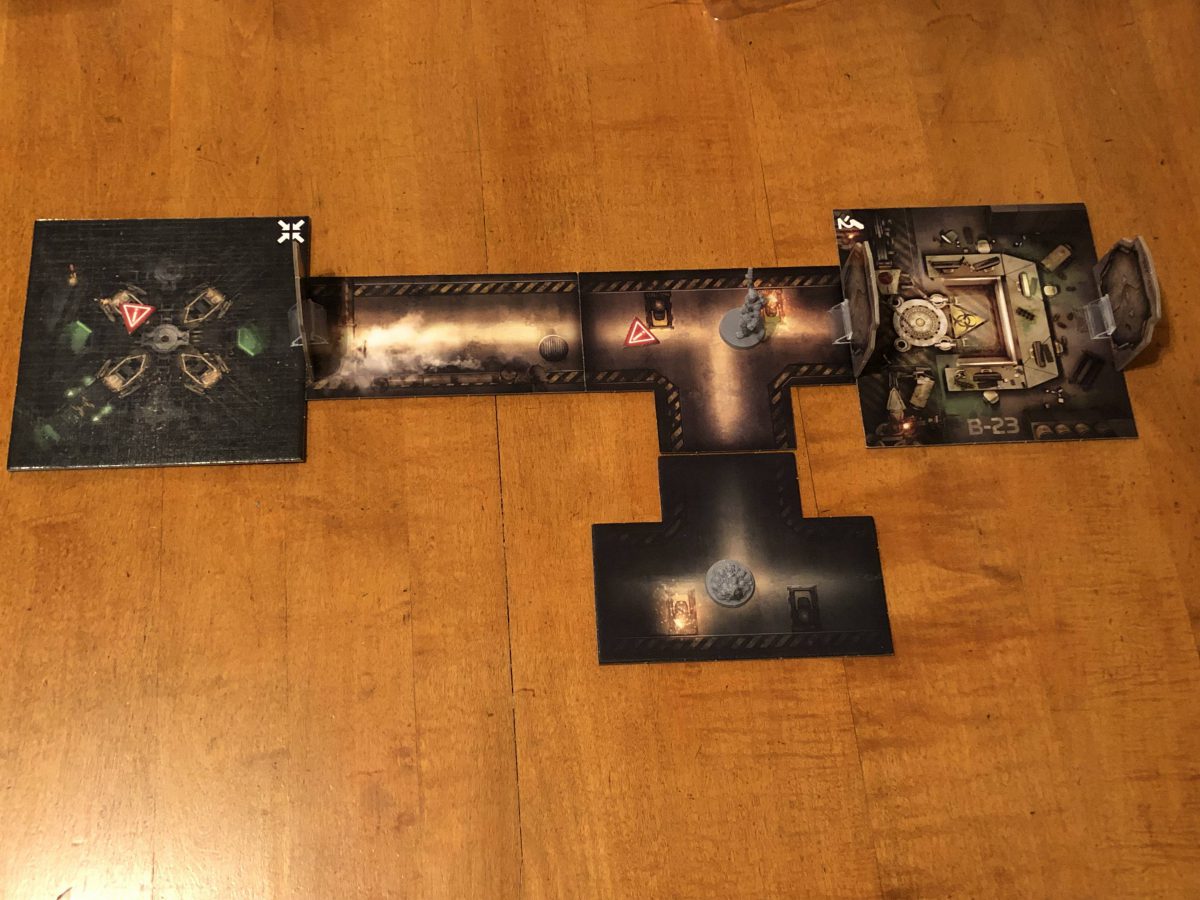 Since the space station starts out dark, the hero wants to turn on the lights using the interact action to protect from losing self control by being startled by creatures. The creatures attack any lights that are on and try to move the hero into dangerous locations. The dangerous locations allow the evil players to perform an extra action on their reaction card. Combat also considers the location status. Combat is dice based with three possible results: a reticle, exclamation point, and an X. The reticle counts as a hit, with the other faces representing a miss. However, if the hero rolls in a lighted area or creatures attack in a dangerous area, the exclamation point also counts as a hit. Creatures need a number of hits to be wounded, and then another number of hits to be killed. Both sides have a key that shows the number of hits to wound and kill each creature type. The hero loses life when hit, and has to reduce self control if they don’t have any life remaining. Killing creatures also unlocks new abilities for the hero including increasing the adrenaline pool, rerolling a miss, and forcing the evil players to reroll a hit.

The hero has a limited amount of time to complete their objectives, all the while remembering what happens on the ever changing map. At the end of each round the evil players clean up most of the locations except for the ones surrounding the hero’s current location and any lighted areas in the hero’s line of sight. Knowing where the hero has been and knowing where the hero needs to explore yet is a huge part of the game. Having eight actions in a round doesn’t leave much time for the hero to do everything they want. The round counter reaching the last space activates Nightmare Mode causing the monsters to roll more attack dice and require more hits to wound and kill. The easiest two difficulty levels reward the hero with an extra round when completing the first objective. 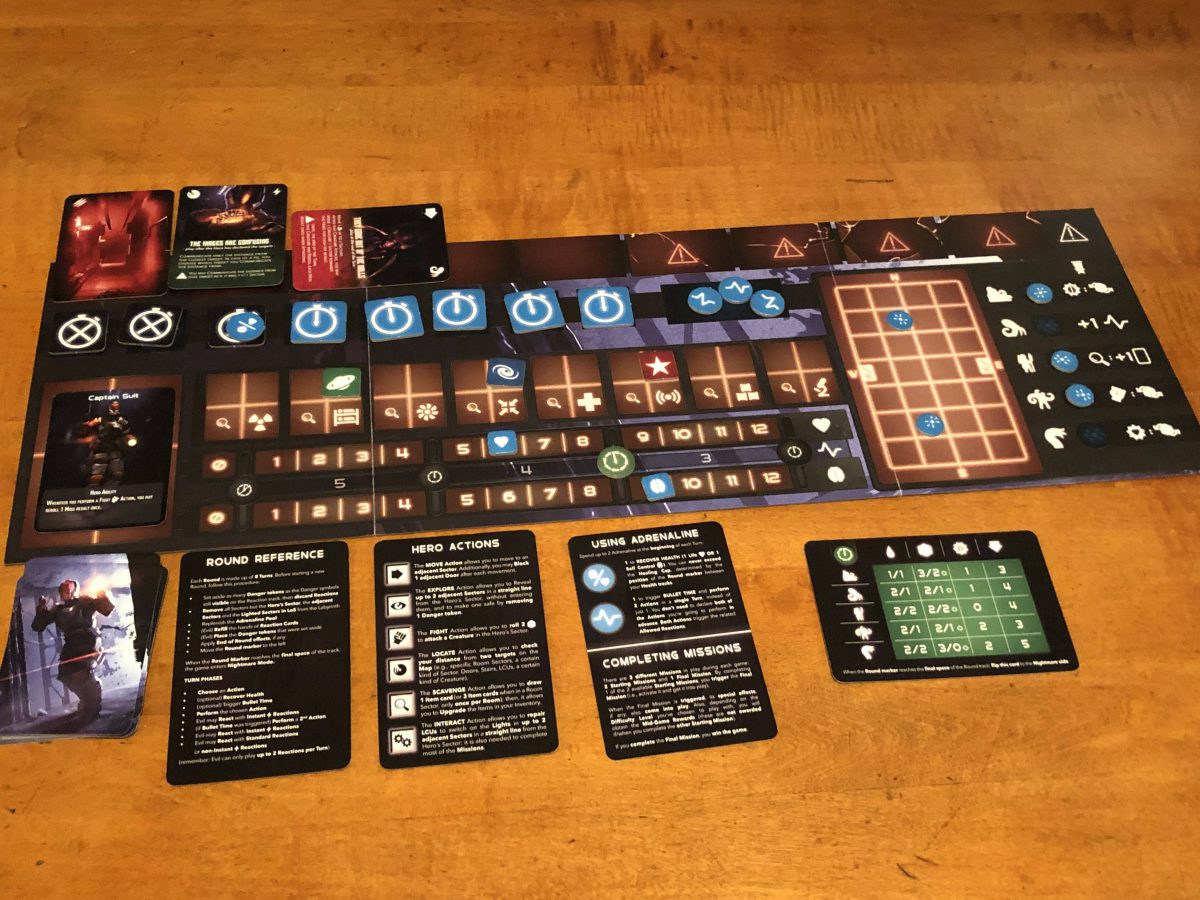 Horrible Games included three separate rulebooks- One covers the general flow of the game for both sides, the second provides rules specific to the hero player, and the third provides rules for the evil team. Breaking up the rules thoroughly explained each side while giving insight as to what the opposite team could do. A few questions came up about the rules, but the organization of the rulebooks made it easy to look up clarification. 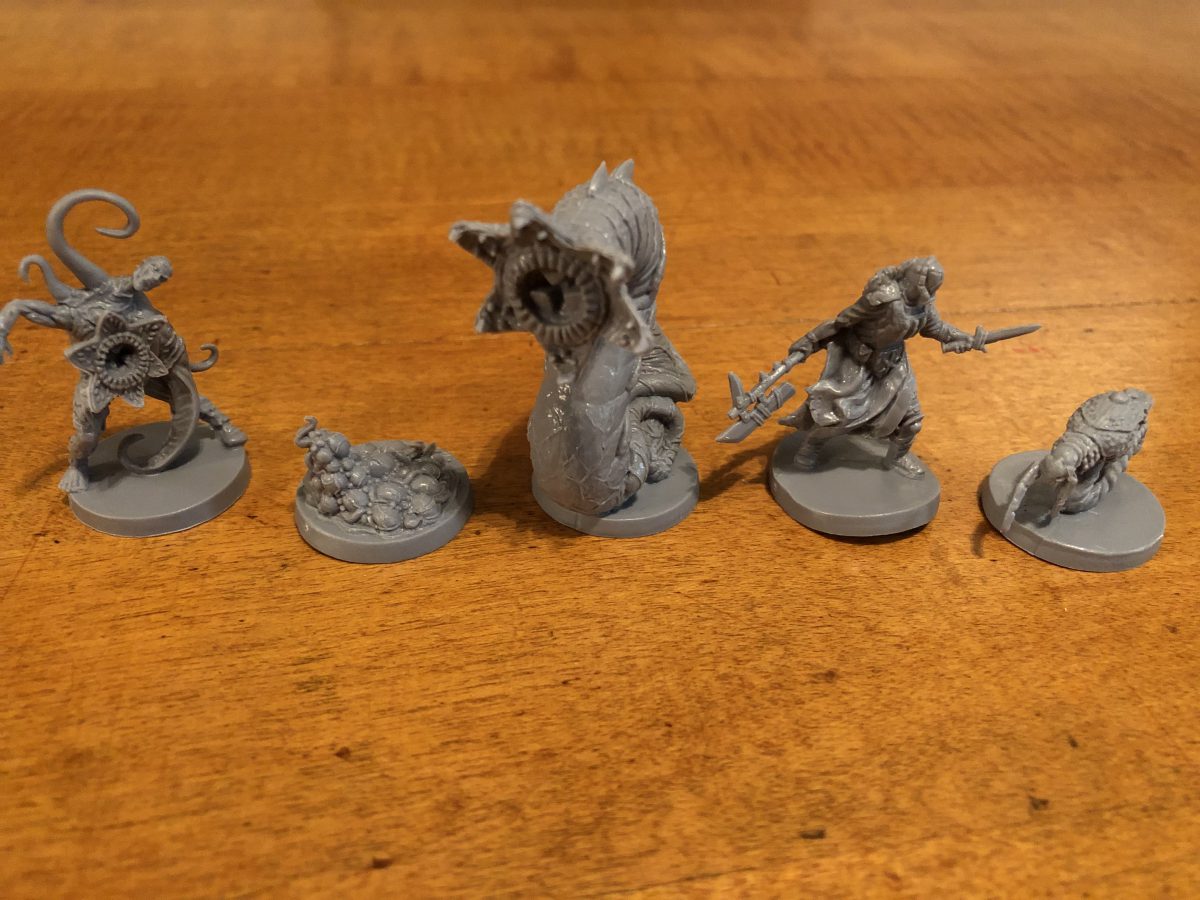 Alone captures survival horror better than some video games do. Play sessions can get incredibly tense for both sides while still feeling balanced. Every decision the hero makes can be the difference completing the objectives and the evil team winning the game. The evil team needs to find a balance between discussing strategy and trusting each other with reactions, while keeping up with the map and tokens on both sides of the screen. If the game starts to feel stale with nameless heroes, an included campaign book includes a story and a background for the heroes. If you are a fan of movies like Alien or games like the original Dead Space, then you owe it to yourself to play Alone.

While not working as a Database Administrator, Keith Schleicher has been associated with Gaming Trend since 2003. While his love of video games started with the Telestar Alpha (a pong console with four different games), he trule started playing video games when he received the ill-fated TI-99/4A. While the Speech Synthesizer seemed to be the height of gaming, eventually a 286 AT computer running at 8/12 Hz and a CGA monitor would be his outlet for a while. Eventually he’d graduate to 386, 486, Pentium, and Athlon systems, building some of those systems while doing some hardware reviews and attending Comdex. With the release of the Dreamcast that started his conversion to the console world. Since then he has acquired an NES, SNES, PS2, PS3, PSP, GBA-SP, DS, Xbox, Xbox 360, Xbox One S, Gamecube, Wii, Switch, and Oculus Quest 2. While not playing video games he enjoys bowling, reading, playing board games, listening to music, and watching movies and TV. He originally hails from Wisconsin but is now living in Michigan with his wife and sons.
Related Articles: Alone, Tabletop
Share
Tweet
Share
Submit