You’ve heard about the drug dealing business from movies, TV shows, video games, and depending on your experiences, in real life as well. They say it’s a dangerous business, not to mention the fact that it’s illegal. If you want to experience what it’s like to be a drug dealer without the real life consequences, then Drug Dealer Simulator may be for you. Starting with little in terms of setup and your cartel contact, you’ll build a business in your shady town as you aim to become its main drug supplier. With a simple gameplay loop that gets more complex as you progress, Drug Dealer Simulator offers plenty of hours of degenerate enjoyment.

As previously mentioned, you start off as some random guy who’s trying to get into the drug dealing business. Thankfully, you’ve befriended Eddie, your connection to the cartel. After some early tutorial lessons that teach you about ordering your supply, picking up orders, spraying graffiti, etc., you’ll be ready to take things into your own hands. From here, it’s up to you how your endeavor goes. It’s pretty simplistic when you first start, which makes it fairly easy to get into. 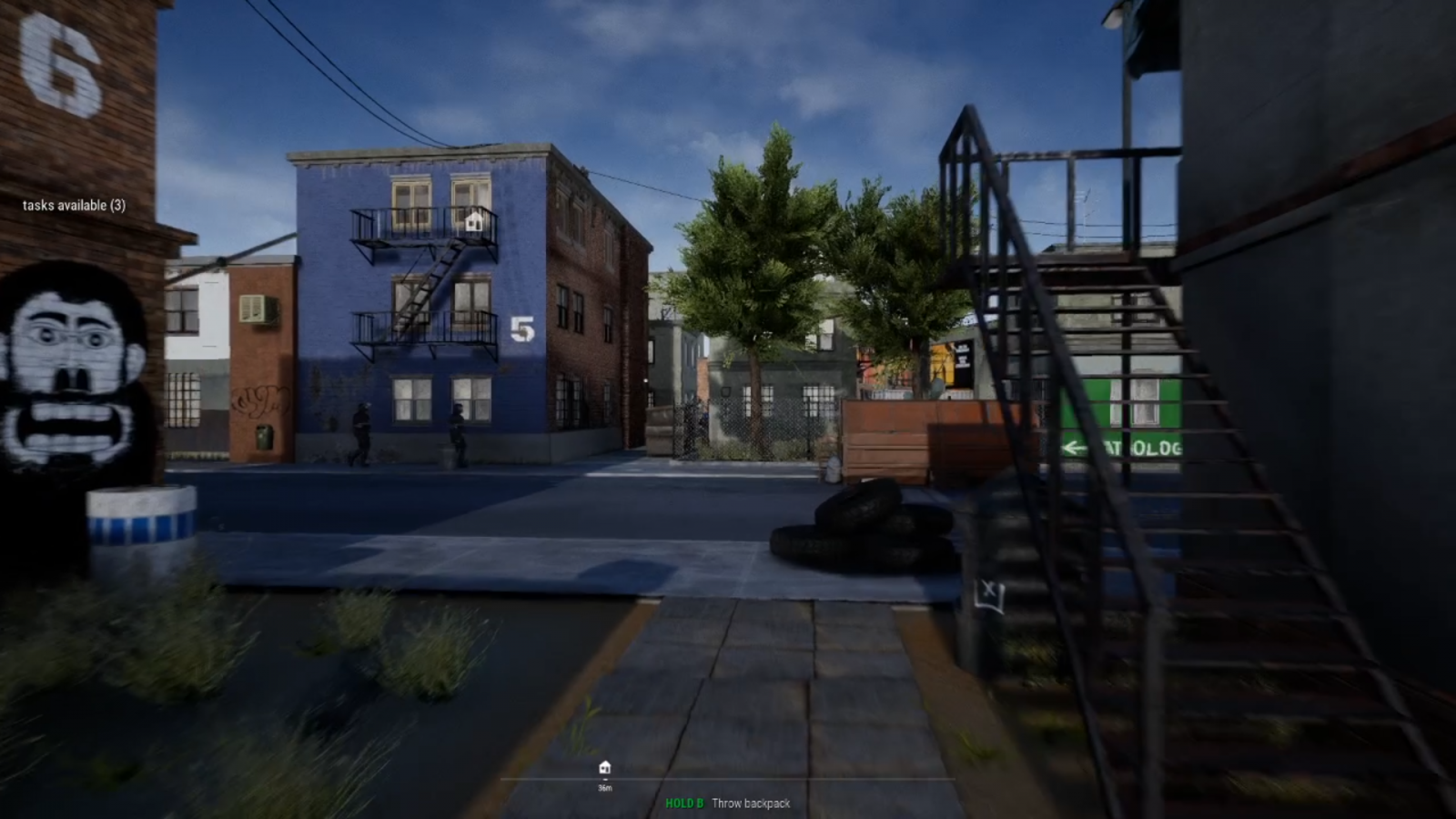 That being said, there are missions that you’ll be tasked with completing as you play the game. Overall, they revolve around expanding your business and becoming more successful. To name a few that I’ve encountered, I’ve had to get five clients addicted to my product, unlock access to other areas of the town, hire a client as a dealer, and check out more apartments to rent. Completing missions assigned to you awards you experience that levels you up, but I’ll come back to that later. Along with “story” missions, you can also take on orders by accessing your laptop in your hideout. Your laptop is where you can read the encrypted messages sent to you by clients, dealers, and other important contacts. You’ll get notifications of messages on your phone, but you can only read them on the laptop. In most cases these messages are clients or dealers requesting drugs. You don’t have to accept right away, but once you accept, you have a limited amount of time to deliver before you fail the order. The orders don’t actually tell you a certain time frame, but I believe it’s around 2 hours of in-game time after accepting them. That being said, don’t accept any orders that you aren’t ready to fulfill. You can leave requests alone for longer that way.

Once you’ve accepted an order, you’ll need to get the right amount ready for them at your workbench. You have to put drugs into jars before you can separate them into individual bags. You can move drugs around as much as you like without any issue, so don’t worry about accidentally splitting it up into the wrong amount. When you’ve got the requested amount, you’ll leave the apartment and head to wherever the client is. Where they are is determined seemingly randomly, although they’ll stick to the same general area when they order from you. Now, you may be tempted to run straight to them as fast as possible, which you can do, but you need to be careful. You live in a shady, run-down town, so police are always patrolling around the city. There aren’t a lot of patrols, but they’re present. I found that it was best to keep as far away from them as possible and stick to the alleys and shadowy areas. Stay out of sight while transporting drugs or you’ll get into trouble. Thankfully, the police have a certain distance that they can see you at, so if you’re far enough away, you’ll be safe. 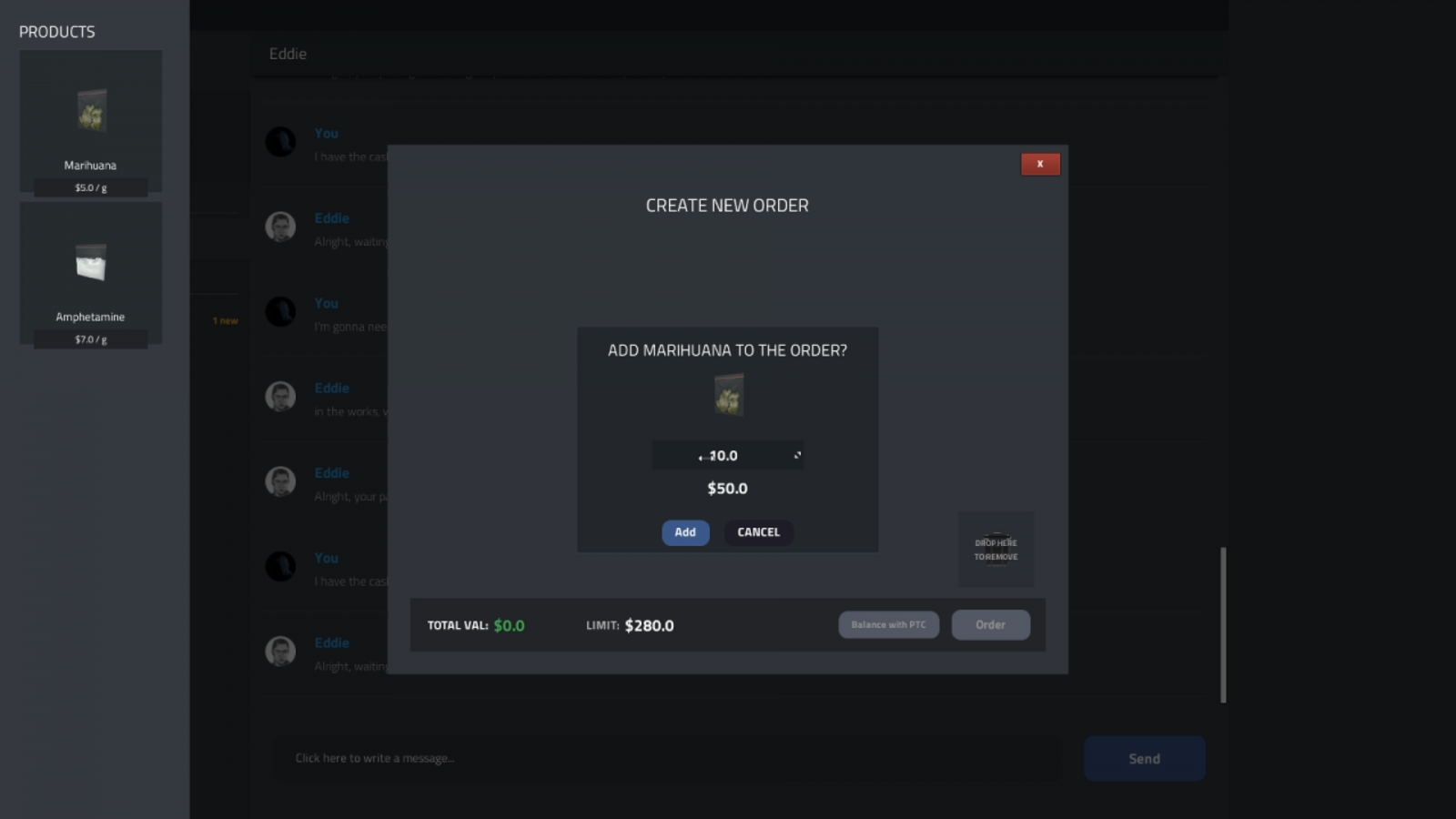 If you act normally, there’s a lower chance that they’ll stop and search you, but if you have anything illegal on you, you don’t want them searching you. If they do, they’ll likely find your drugs and confiscate them. If they spot you, you can always try to outrun them before they reach you, but that makes you a fugitive. Being a fugitive makes the police more cautious as they’re on the lookout for you. That’s not going to help your business, especially since you have to be on the lookout for cops as it is. Speaking of police, there’s a curfew in effect at night because of how run-down the area is. There’s a countdown an hour before it goes into effect, so you have time to get home before it starts. When the curfew, known as police hours, is in effect, the police will chase you down and taze you if they see you, no matter what you have or don’t have on you. At that point, you’d be breaking the law by defying the curfew. This may persuade you to stay indoors all night, but there’s something very tempting to get you out at night; During this time, clients will order larger quantities of drugs and pay you more because of the added risk. Honestly, because of this it’s much better to conduct business at night.

On top of that, there are risk meters in your menu that correlate to how risky you’re being. The more business you conduct in the daytime, the more those meters go up. The same applies for larger business deals, depositing too much money into your account during the day, etc. While orders earn more money at night, they also attract less attention, and therefore cause the meters to go up at 50% of what they would during the day. Meters also drop faster at night due to no activity, which is a huge plus if you’ve been getting too risky. If you’re making some good money, be sure to keep an eye on those meters or else you’ll get raided by the DEA. I’ve thankfully been careful and haven’t been raided yet. 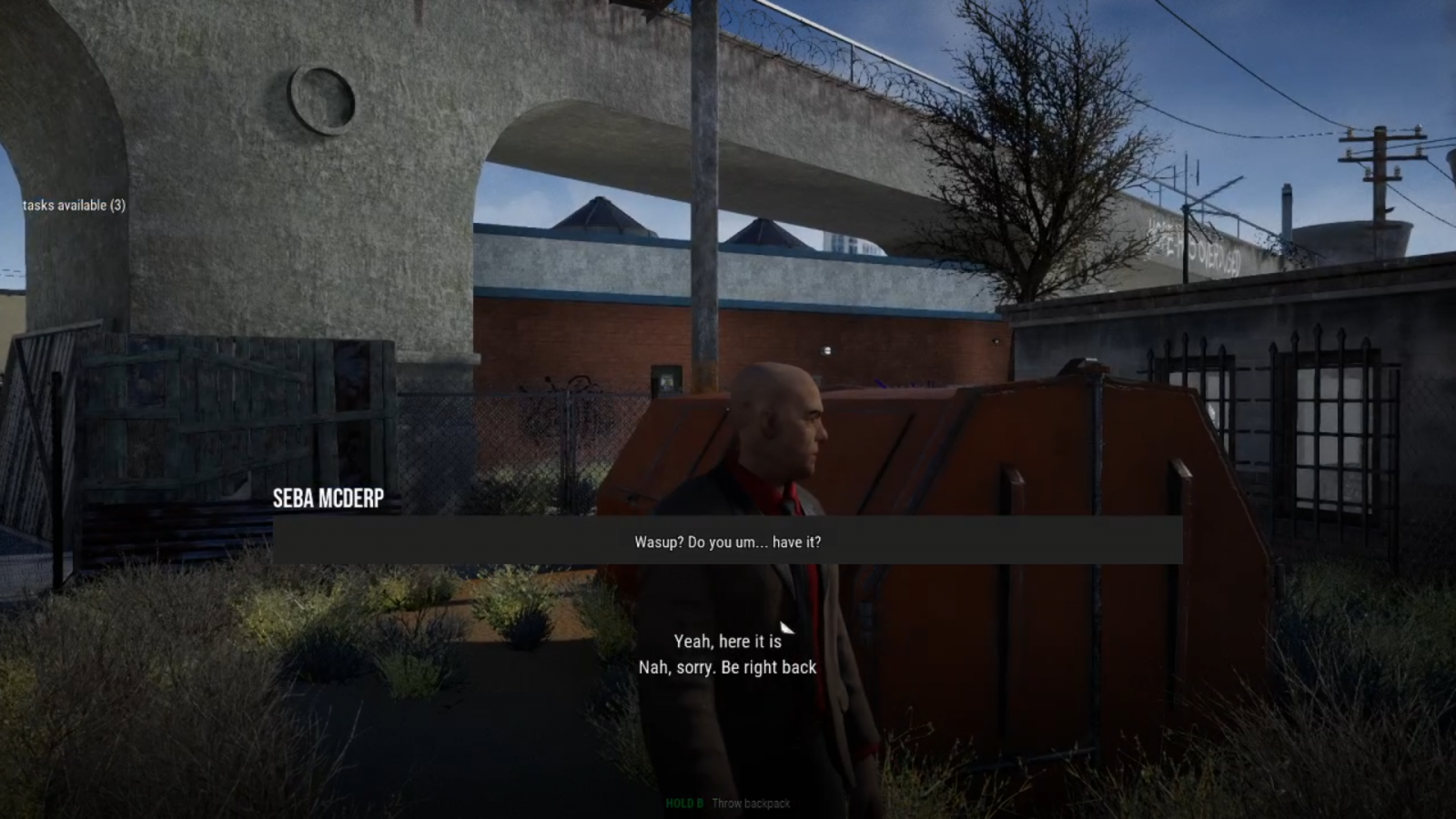 Now that you’ve been warned about the police, back to the business side of things. Make sure you have the right product, amount, and form(powder, crystal, etc.) when delivering to your client. If anything is wrong, they won’t accept it. Give them the right drug and you get paid. If you’ve turned a client into a dealer, the only differences are that they’ll order larger quantities since they’ll be selling to unknown clients, and that you don’t get paid right away. You have to wait until they sell their supply, but when they’re done they’ll message you about meeting up to drop off cash. This is where the waiting pays off, both literally and metaphorically. Dealers help you make much more money with a lot less work, so be sure to hire some dealers when you can. It doesn’t cost you anything extra besides the cost of ordering the drugs to supply them with. Funny enough, you’re also ordering drugs and paying back your supplier just like your dealers. The difference is that you have to pick up your drugs from hidden dead drops (marked on your map when dropped off and labeled with an X somewhere nearby). Which dead drop Eddie uses is completely random, but after a while you’ll learn where they all are and how to find the actual stashes. When you want to pay back your debt, you message Eddie on your laptop and then go to his apartment just down the street. You have a “credit limit” so to speak, so you can only order so much before having to pay him back. I always made sure to repay him as soon as possible in order to open my credit back up right away.

As you complete orders and missions you’ll get experience and level up. Leveling up rewards you with five skill points that you can use on various aspects of your character. These include increasing the number of items that you can carry in your pockets without a backpack, increasing stamina, running speed, stealth, salesmanship, your ability to keep drugs hidden during police searches, and the amount of experience you earn during the game. I highly recommend focusing on the last aspect first because it’ll help you level up faster and enable you to earn more skill points faster. When you’ve upgraded it enough you’ll permanently earn two more skill points every time you level up. That is incredibly helpful. From there you should focus on your own playstyle, although I leaned into salesmanship and stealth because I wanted to be sneaky and profitable. 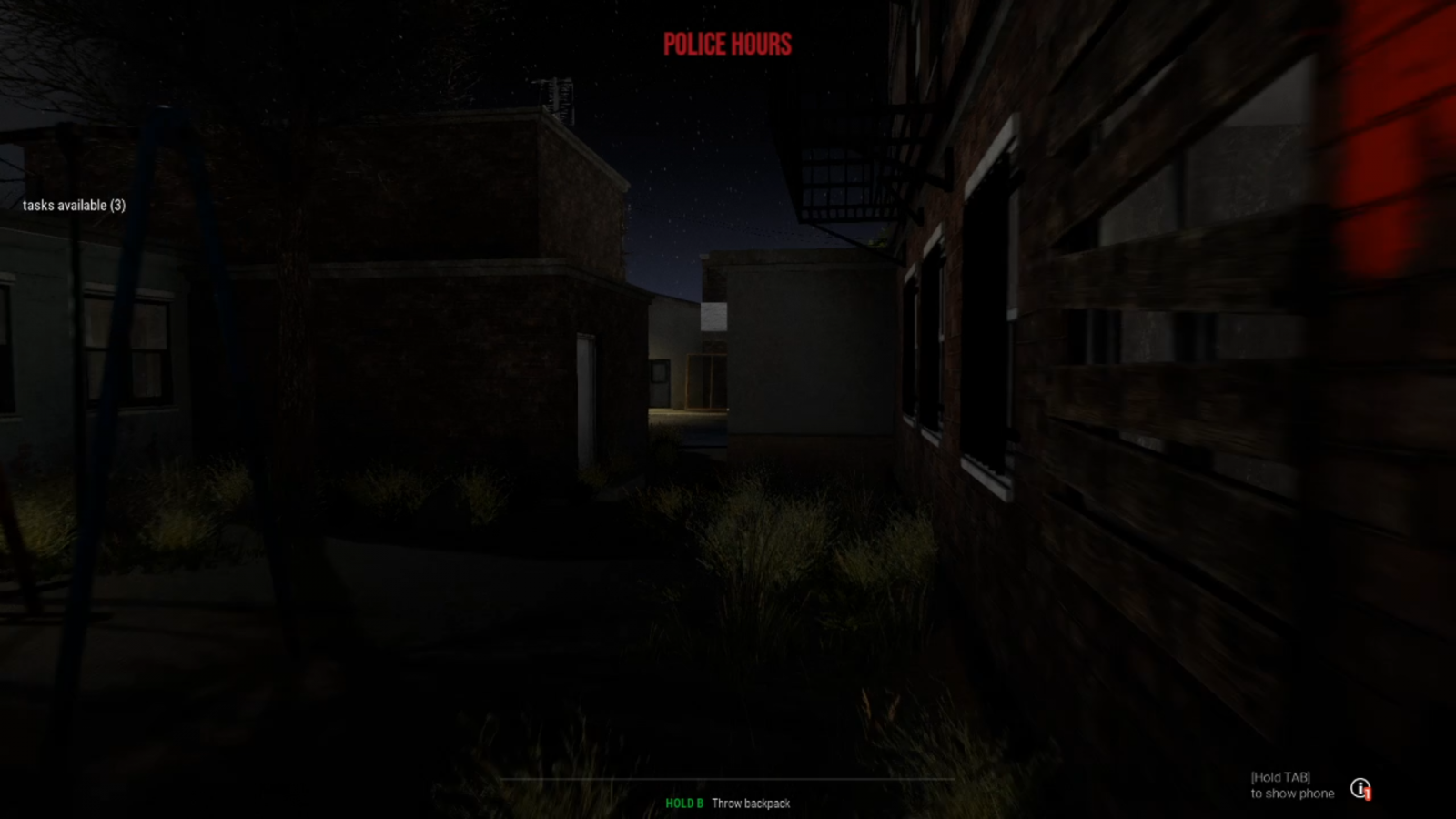 I’m not super experienced in this regard, or at the very least not great at it, but I’ll touch on mixing. One skill that you’ll want to look into and tinker with is mixing drugs. Doing so allows you to stretch out your drugs or make them more addictive by adding in things like sugar, viagra, salt, baking powder, ibuprofen, etc. This can get clients addicted and more likely to buy larger amounts of your product. They may even pay more for it. Apparently this is more important down the line because too much “pure, uncut product” can cause clients to OD. This not only loses you a client, but it also puts your operations more at risk of being discovered and you get raided. It’s a lose-lose situation, so either test out some ideas or look up recipes online. I learned that having around 70-80% drug and the rest being additives is a good mixture of satisfying the customers without risking any overdoses.

Whew, that’s a lot to remember for being a drug dealer, huh? On the technical side of things, the game runs fairly well. There’s been plenty of screen tearing, but it doesn’t destroy the world or anything. It’s very noticeable, especially with fast turns, so keep that in mind. The environment isn’t impressive in any way, but it does create that run-down town feeling that you can tell it’s going for. I wouldn’t want to live there, that’s for sure! Sound design is fine, whether it’s the music blasting from the neighbors, the police radio chatter, the phone calls from Eddie, or even just the various other noises of the neighborhood. The gameplay loop is repetitive but in a way that actually gets more complex as you go on. More clients, dealers, drugs, etc. to manage means you have to take a lot into account when doing your usual drug dealer routine. Drug Dealer Simulator has its fair share of problems, but it’s still a good time nonetheless. They’re working on patches as time goes on, so they’ll be attempting to iron out any issues and bugs that are in the game right now, so keep that in mind. Overall, if you want to try your hand at virtually dealing drugs, be sure to give this one a look!

Drug Dealer Simulator is an interesting look into the drug dealing business. You can order drugs and sell to clients in order to expand your reach. With an ironically addictive gameplay loop, you'll be sucked into the routine for hours. Unfortunately, there's plenty of screen tearing and an unimpressive world that you'll bear witness to.

Codi loves to play video games and watch movies. He will watch almost any kind of movie just to experience them. His ideas take inspiration from the shows and movies he watches, and games he plays. He also loves a good pun.
Related Articles: Drug Dealer Simulator
Share
Tweet
Share
Submit