People deal with their negative emotions in different ways. Some people exercise, others have sex at funerals, Travis Touchdown cuts off heads. No More Heroes was released in 2007 on the Wii and saw players taking on the role of Travis as he worked his way up the United Assassins Association to become the United States’ number one assassin. In a Desperate Struggle three years later, Mr. Touchdown, the Crownless King, has been forced back into the fray with the murder of his best (and only) friend. Now ranked 51st, he’ll have to kill his way back to the top to get his revenge.

No More Heroes 1 and 2 are fascinating works of art. Its veneer of ultra violence and crude humor hide a study of our culture’s obsession with violence and how little we care for human lives. But I’ll leave that for you to discover for yourself, since in a nice surprise both were recently ported to Switch as digital downloads. While the first game was remastered on the PS3, this is the first time the sequel has made its way off the Wii (and in HD, no less), so how do they hold up? 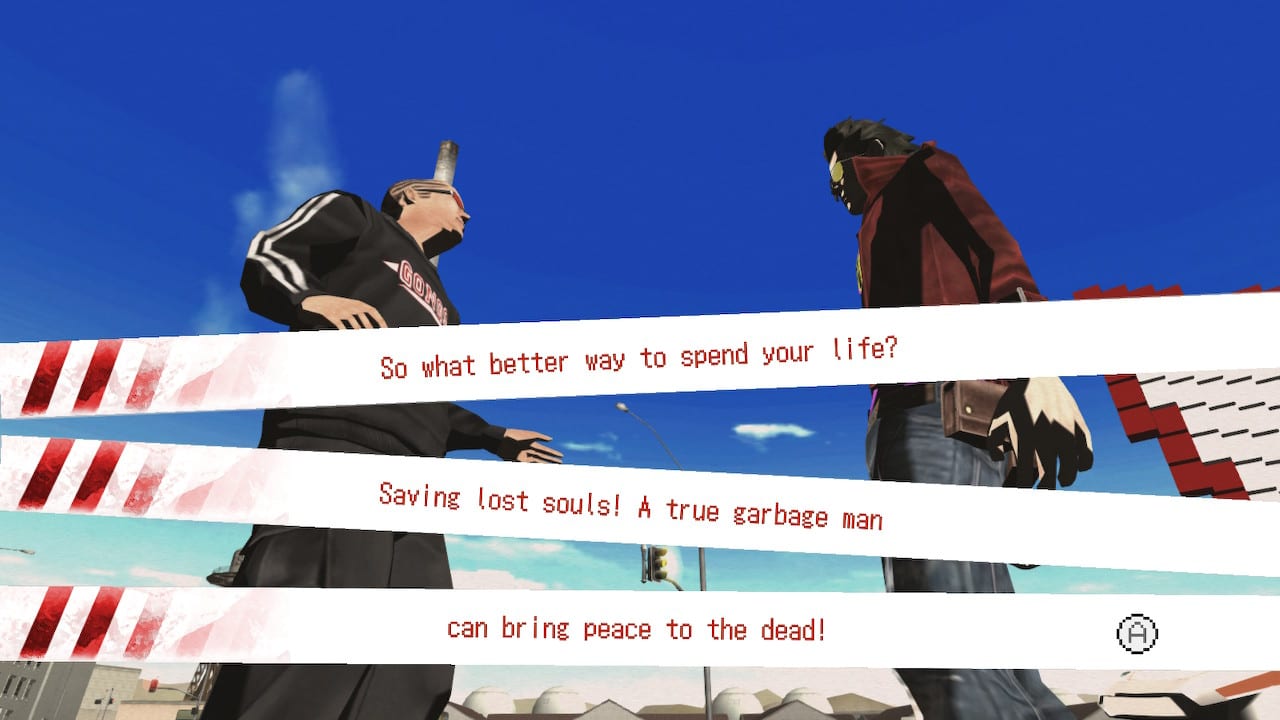 Visually, these games look miles better than their original counterparts, Desperate Struggle especially. Aside from some still low quality looking character textures, everything looks crisp and the higher resolution really makes the art style stand out. Overall they both perform much better too, both docked and in portable mode, though the open world of the first game does have a few drops in framerate. The two games target 60fps and for the most part stick at least close to it, though the large amount of hit stop (a frame holding for a moment when you attack) makes it a bit difficult to tell.

The two games play exactly as they did on Wii with the classic controller, warts and all. The four face buttons are each used to do different attacks. X and Y perform high and low slashes with the Beam Katana (which is literally just a lightsaber, I don’t know how they haven’t been sued yet), and A and B are used for high and low punches and kicks. Combat hinges on this high and low dichotomy. If an enemy is guarding high, you need to hit them with low Katana attacks or stun them with a high punch to use a powerful wrestling move on them. Once their health is depleted, you need to move the right stick (or motion controls) in a certain direction to finish them in a bloody flourish. While normal combat is fun in its own right, the boss fights are the biggest draw. Each ranked assassin has a unique fighting style, like the gunslinging singer Dr. Peace or the incredibly sad baseball lolita Bad Girl. These one-on-one fights are, apart from one or two stinkers such as Holly Summers, a ton of fun.

Unfortunately, getting to these fights can feel like a chore. To actually challenge the next rank, you need to pay a fee and to get cash you do odd jobs around Santa Destroy like picking up garbage or assassinating the CEO of a popular pizza chain. To stand a chance in the next level you’ll also need to pay for new Beam Katanas and training to increase your health. Most of these minigames are tedious and the side assassination gigs can be downright frustrating with the amount of strong men the game throws at you. It’s slightly improved in the second game, with the open world being replaced by an equally interesting and less time consuming menu, but it still feels like a roadblock to get to the good stuff. If these were optional, they would be a fun distraction from the bloodshed, but as it stands they’re just tedious.

Strangely, No More Heroes 1 is a port of the Wii version, not the PS3 remaster with the added content. While many fans dislike the Heroes Paradise release for several reasons, the lack of the additional boss fights, ability to retry failed side jobs, and many more improvements feels like a huge oversight, as with that content this would easily be the definitive version of the game. Hopefully they can add that content back in as DLC or in an update, but I highly doubt that will happen. On the other hand, No More Heroes 2 on Switch finally runs at 60 frames per second, easily topping the original Wii release. The only thing I’d say the Wii version has over the other releases is Sylvia’s phone calls playing out of the Wii Remote’s speaker (Which just plays on the TV or console now), but that’s about it.

While the first game is missing some content from the PS3 version, No More Heroes 1 and 2 on Switch are easily the best versions of these fantastic games. While it’s disappointing they didn’t take the time to fix any of the games issues like the tedious minigames, both are still well worth playing.

David is the kind of person to wear his heart on his sleeve. He can find positives in anything, like this is a person who loved Star Fox Zero to death. You’ll see him playing all kinds of games: AAAs, Indies, game jam games, games of all genres, and writing about them! Here. On this website. When not writing or playing games, you can find David making music, games, or enjoying a good book. David’s favorite games include NieR: Automata, Mother 3, and Gravity Rush.
Related Articles: No More Heroes, No More Heroes 2: Desperate Struggle
Share
Tweet
Share
Submit