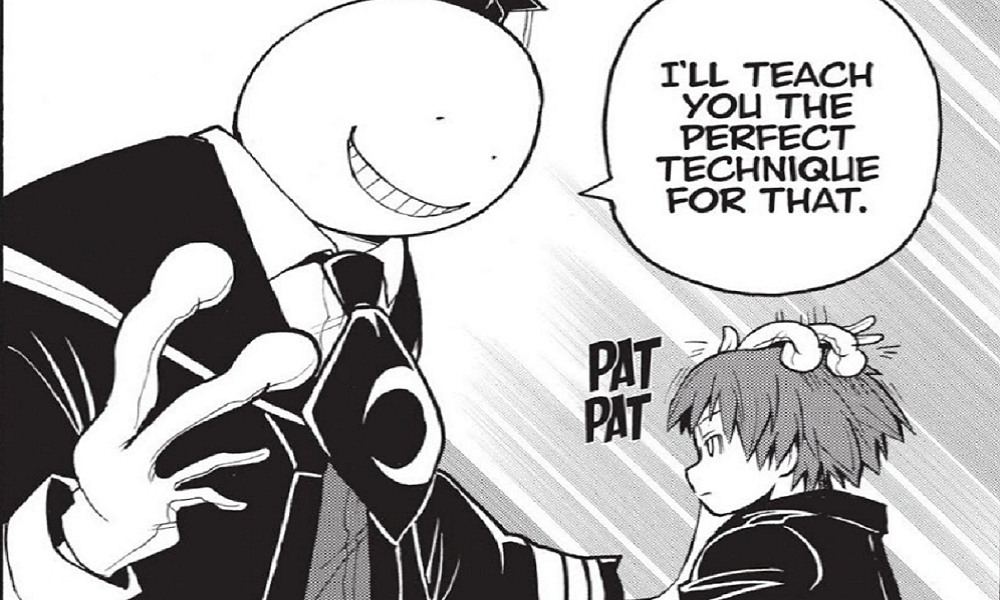 Well, here we are folks: the final arc of Assassination Classroom. While it’s had its high and low points, the series remains one of my favorite manga, and I’ve enjoyed my time with it. With the March deadline to kill Korosensei fast approaching, will the students of class E have what it takes to destroy their teacher once and for all?

This volume begins with some focus to Karma’s arc, which tasks him with the concept of humility when ignoring intimidating opponents as he leads the rest of the class. This leads into a lighthearted interlude, with Korosensei creating a yearbook with the students getting forcibly involved with his antics. Unlike last volume’s comedic yet unnecessary filler, this is actually plot relevant, because lowering his guard here sets up the final assassination attempt in the series. Worried that Korosensei will explode after the March deadline is up, the government sets up one last plot to obliterate the octopus assassin. Initially, Class E is kidnapped and unable to assist their teacher, detained until the last possible moment. After being released, the motley crew of student assassins must try and protect their teacher before it’s too late.

Compared to the previous volume, volume 19 feels much more weighty and meaningful, with a nice balance between humor and serious drama. This is the final arc (as one chapter splash page reminds us), so Assassination Classroom is pulling out all the stops to show how our protagonists have grown. There were a couple of focus chapters centered on Karma and Nagisa, and they display an amazing amount of character growth in their individual arcs. (There’s also a blink-and-you’ll-miss it scene with Itona that’s pretty heartwarming as well.) These chapters are actually important to the overarching narrative and the lessons learned from the protagonists are crucial to success in the final battles.

Like the most recent US volume of My Hero Academia, this volume of Assassination Classroom also deals with the public unveiling of the events the main characters have undergone and how the media portrays Korosensei as the dastardly villain the government must kill at all costs. The media further deludes the viewing public with how Class E has been pressured to entertain him. This, as the reader and the characters know, is blatantly false, and the manga does a great job in portraying the despair of the situation; you’d feel terrible if people who barely knew you put words in your mouth. (To be completely fair, Korosensei did have a troubled past, as seen in flashbacks to previous volumes, but his character arc throughout the series has redeemed him immensely.) It’s these dramatic parts that build tension and gravity to the scenario at hand, and they portray the seriousness of what’s going to happen next.

While the dramatic buildup is satisfying and tense, the action sequences are a mixed bag. The stakes are at their highest, and this is interesting since Class E has gone through many deadly assassination plots at this point in the series. The initial villain of this arc, Craig Hojo, is made to feel intimidating, and in his first on-screen appearances he is. However, he and the other opposition that are positioned to prevent Class E from reuniting with their teacher are dispatched pretty easily without much fanfare. The action panels are flashy and carry the signature style Assassination Classroom is known for, but they’re understated by the fact that they’re over way too quickly. Sure, the class has improved over the year, but these fights felt too easy. It rushes the pacing a tad and I really wanted more action scenes here. For what it’s worth, the real battles haven’t begun yet, and the end of the volume teases at a familiar foe with a new threat looming. Guess we’ll have to see what the final two volumes hold in store for our class of assassins.

An improvement over the last iteration, Assassination Classroom volume 19 mixes a great balance of dramatic tension and action. While it does suffer from a weak villain, this is a great start to the final arc of the series.

Elisha Deogracias is an aspiring accountant by day, freelance writer by night. Before writing for Gaming Trend, he had a small gig on the now defunct Examiner. When not being a third wheel with his best friends on dates or yearning for some closure on Pushing Daisies, he's busy catching up on shonen manga and wacky rhythm games. Mains R.O.B. in Smash. Still doesn't know if he's a kid or a squid.
Related Articles: Assassination Classroom Volume 19, Beyond the Page
Share
Tweet
Share
Submit