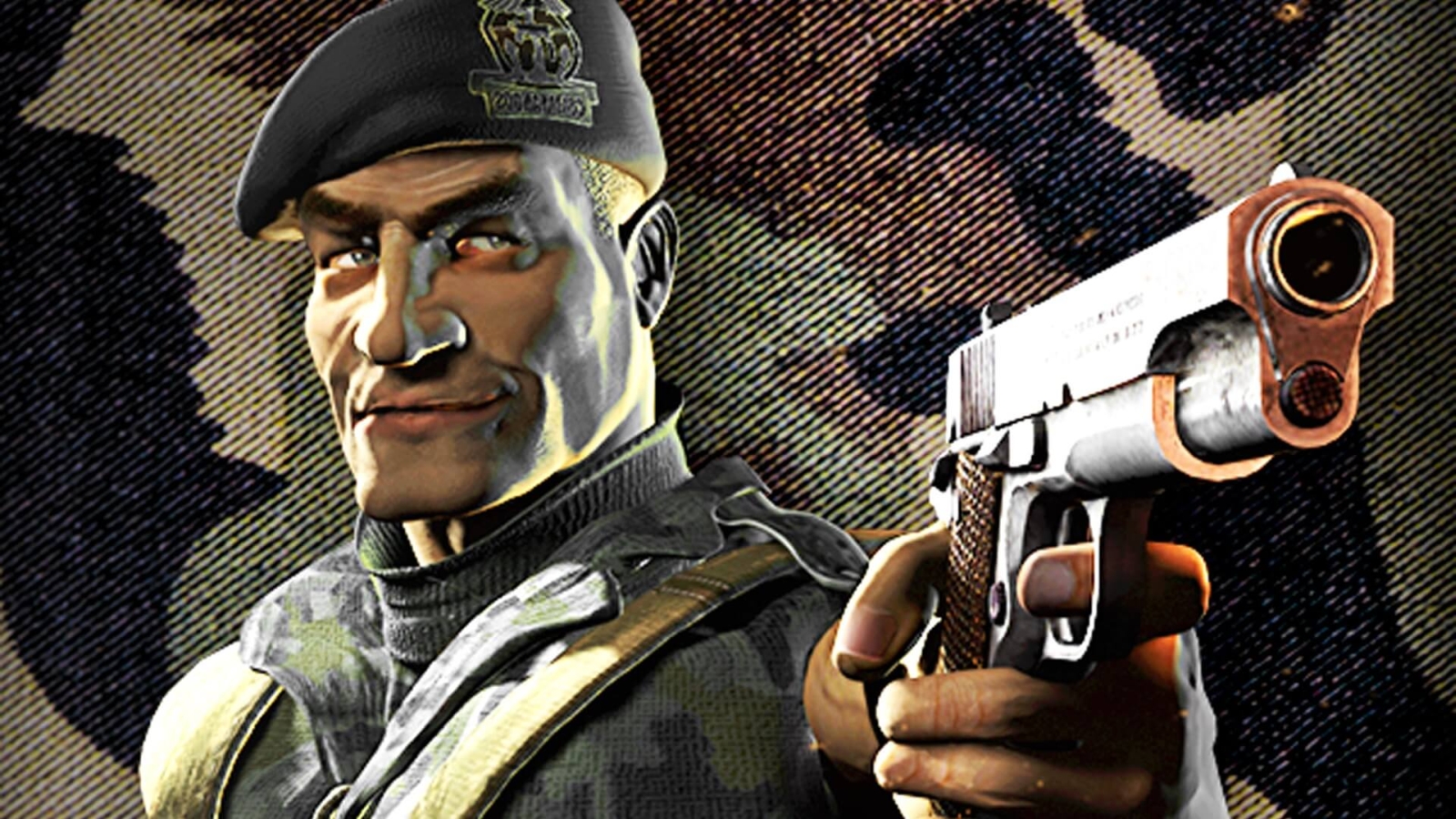 There are a few games that define an entire genre, and Commandos: Behind Enemy Lines is among them. Sure, there had been isometric tactical titles before this game from Pyre Studios. Focusing on World War II, the game featured an intrepid team of British Commandos bent on taking the fight to the enemy. Based loosely on real missions conducted by the SAS, the game featured a Green Beret, Sniper, Marine, Sapper, and more tasked with taking out Nazi installations and targets using unconventional stealthy approaches. (Of note, if you’d like to see a fantastic show that will put you in the mood for this game, check out Churchill’s Secret Agents: The New Recruits on Netflix where regular people tackle real-world tactics of SAS soldiers from the time) The sequel, Commandos 2: Men of Courage moved the game from a 2D engine to a 3D one, added higher resolutions, interior and underwater locations, the ability to use enemy weapons, vehicles, and equipment, and three new soldiers for the fight. It remains one of my favorite tactical strategy games of all time.

Having purchased the rights to the game after Pyro Studios went under in 2017, publisher Kalypso Media went to work, partnering up with developer Yippee! Entertainment to bring this game back to life for modern platforms and for new audiences. Will this live up to my absurdly fond memory, or is this another game that should have stayed locked in the nostalgia of our minds? 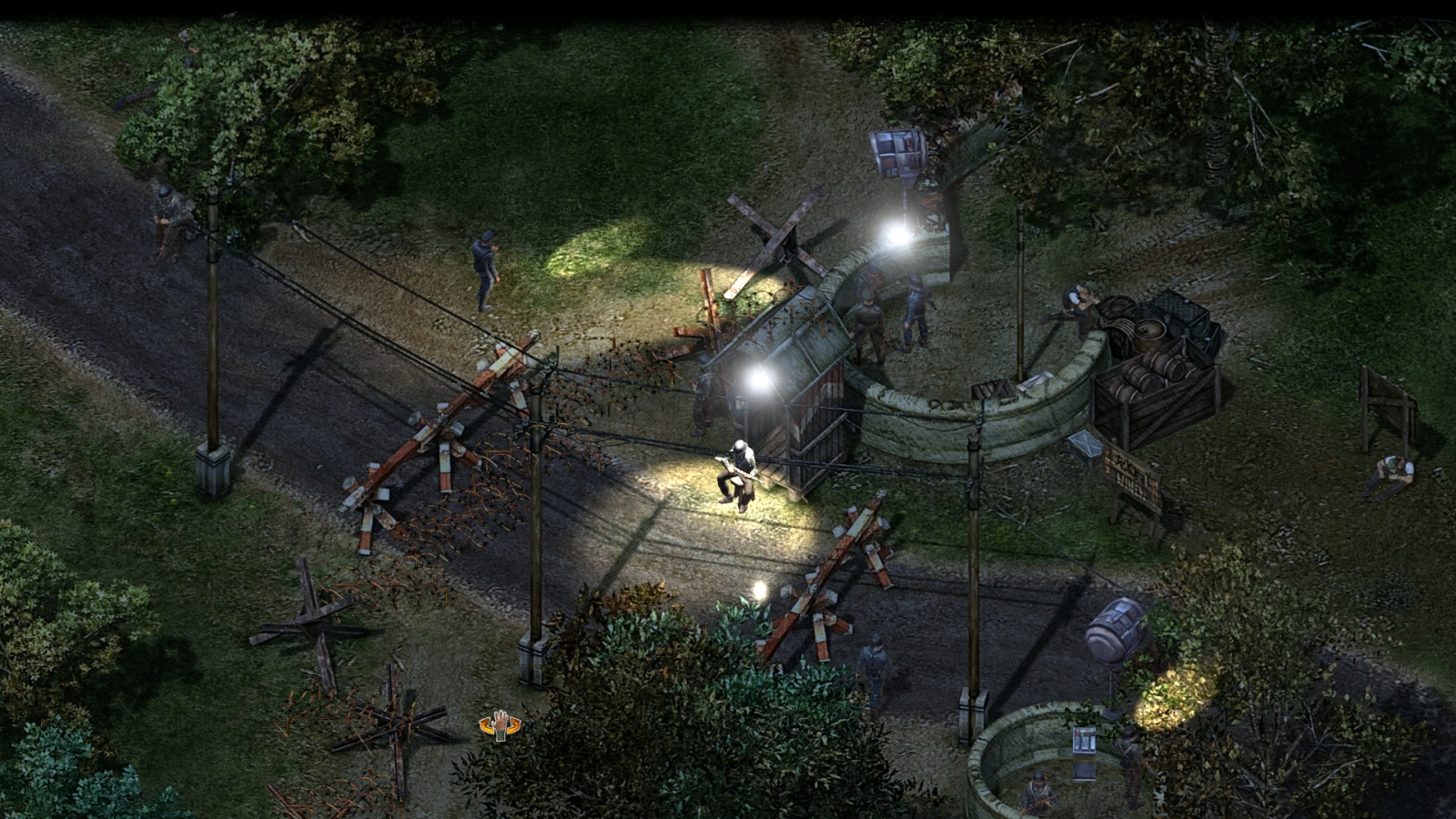 The lighting and shadows see a good bit of improvement.

The first and most obvious improvement in Commandos 2: HD Remaster is obviously the graphical overhaul. The original game ran at just 640×480 and with a 4:3 aspect ratio with all the rough edges that implies. Here, we see resolutions spanning anywhere from the original up to 4K, with three levels of detail options and refresh rates locked at 30 or 60. If it were just these things, that’d constitute a remaster, but the Yippee! team put in the extra work, fixing many of the wonky animations from the original. No longer do soldiers spin in place like they did in the original, instead moving a bit more naturally. It’s still a little bit stiff, and there are some that need work (looking at you crawling animation), but most of the animations are much improved. It’s also great to be able to see well-rendered shadows underneath people, lamp posts, buildings, and more, but without the massive jagged edges of the original.. That said, the graphical rebuild didn’t refresh the environments as much as I would have liked. While the team did give a solid update to the maps, it’s all still very static. While water moves and snow falls around the team, there’s no movement to trees or bushes when you crawl through them or when the wind blows through.

Beyond a simple facelift, there are gameplay implications for pushing more than 3X the polygons as the original. Previously, I’d struggle to see the difference between grunts and officers. Their uniforms not only designate their skills, but also how effective they’ll be at distracting or blending in with other soldiers. The extra graphical fidelity made spotting them from a distance easier before making an approach. 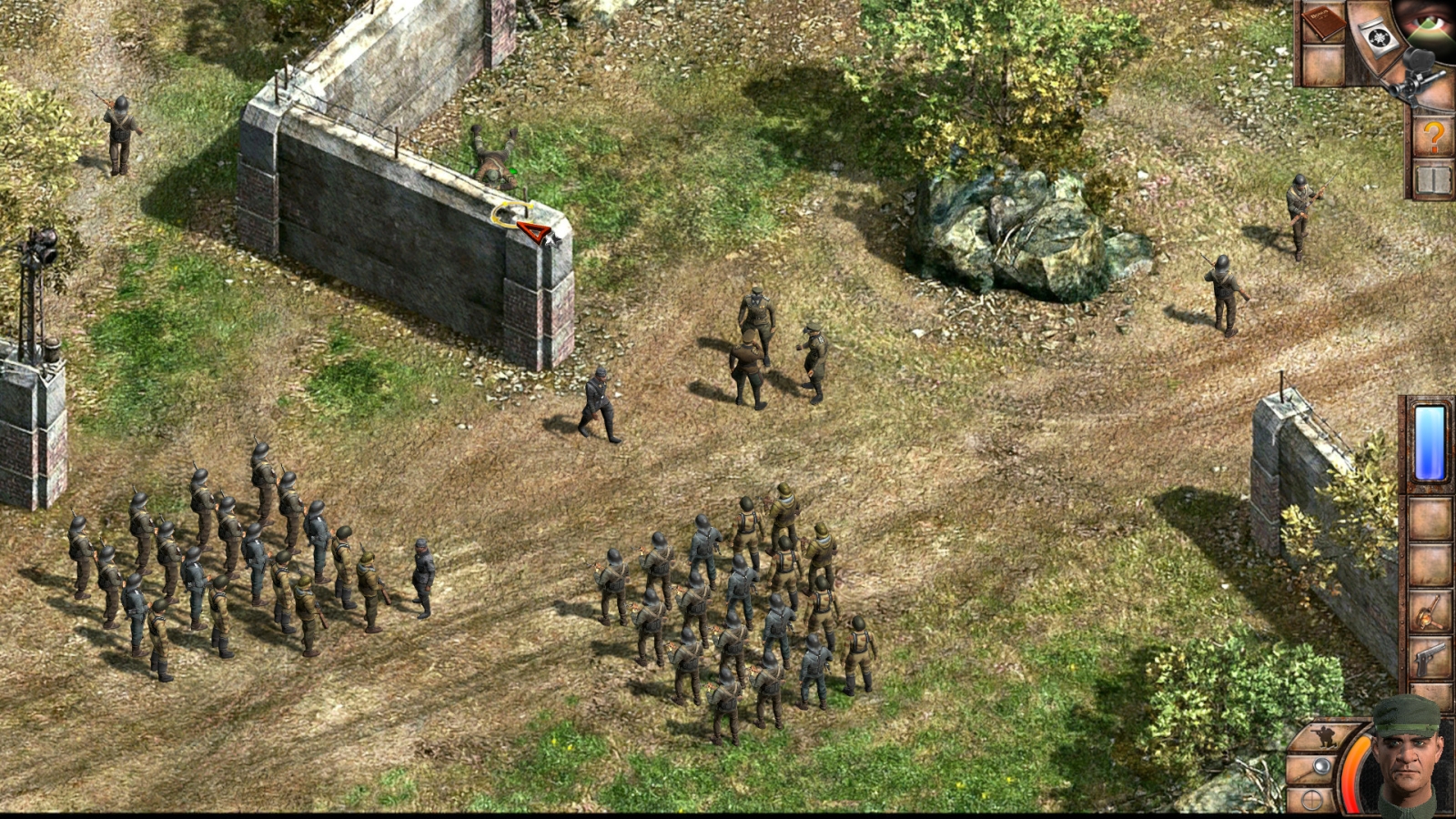 Being able to see the differences between troops is helpful.

There are a total of 21 missions included in the remaster, including the nine bonus missions. If that sounds like it might be short, then you’ve not played a Commandos game before. The gameplay in this series is deliberate. Approaching each mission is an exercise in extensive planning, careful execution, and a heaping helping of luck.

As each mission is based either on famous cinema or real-world Commando missions, you’ll immediately recognize the broad strokes of a few of these. One mission involves the recovery and utilization of an enigma machine, culminating in a daring escape. Another involves the rescue of “Colonel Guiness” and the destruction of a bridge over the river Kwai. Attacking a Japanese aircraft carrier while in port, the team took out an entire team of A6M Zeros. None of these missions are simple, but thankfully each team member has unique skills to help them win the day. 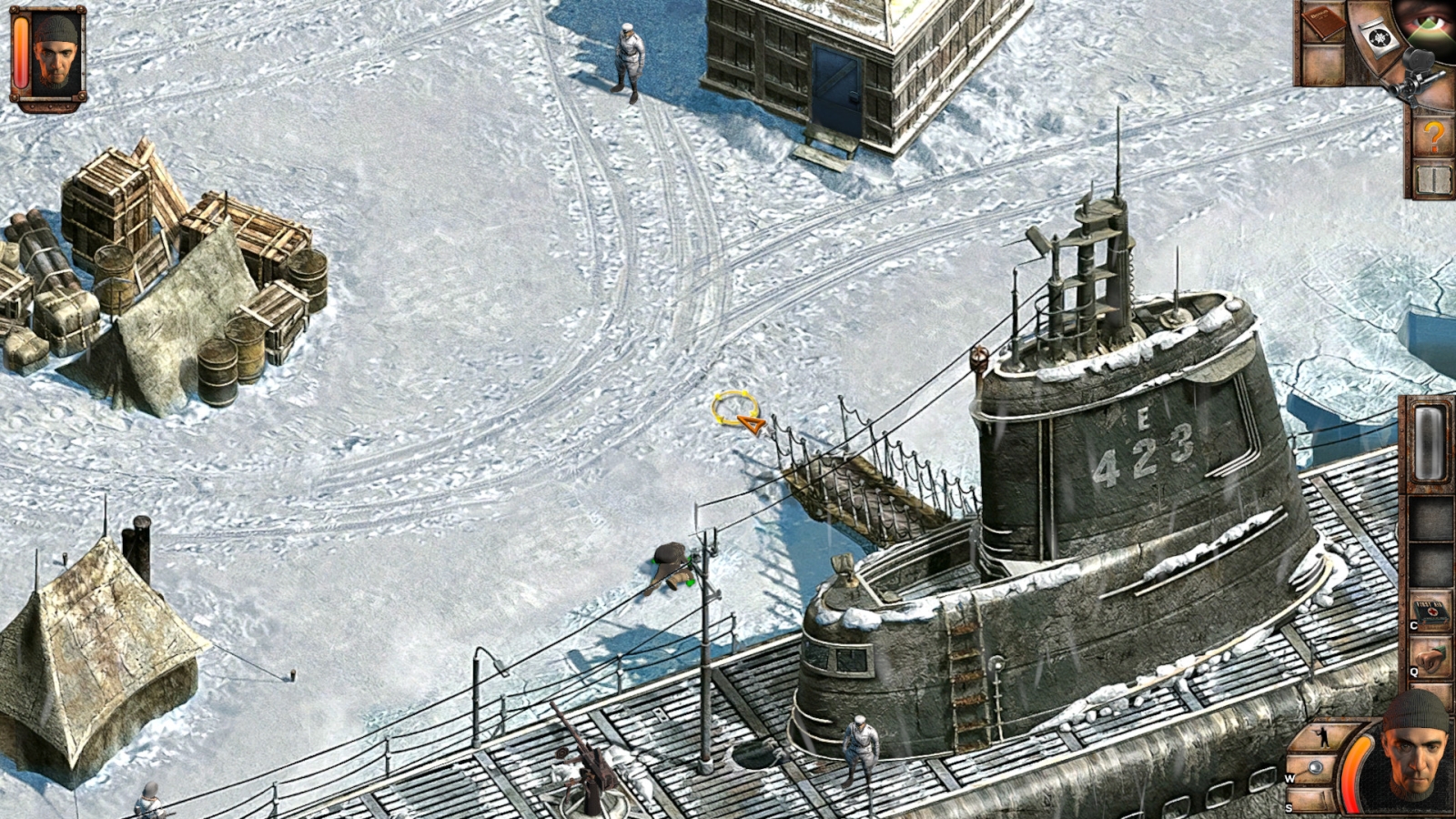 That’s a lot of open ground to cover.

The Green Beret is able to leap through windows, has more health and speed, and enough muscles to lift heavy things like barrels. He also equips a knife that can kill enemies at point blank range instantly, and can place a decoy to distract his enemies. On the opposite end of the spectrum is the Sniper who, as you would imagine, carries a very loud and very powerful sniper rifle. Able to take out anything on the map, he only carries a handful of rounds, so target selection becomes key when you decide to go loud. The Marine is your…well, Marine. He can swim faster than any other commando, can throw his knife for instant kills, and carries an inflatable boat to transport the other team members. When underwater tactics are needed, he can also don a diving suit, granting him as much time underwater as he needs, as well as a harpoon for stealthy kills. He can also use his grappling hook as a tripwire, or ascend walls.

The Driver is able to drive any vehicle in the game, dig defilade trenches as traps for the enemy, deploy a wire trap, and carries a smoke grenade, poison gas grenade, and a molotov cocktail. His life gets fun when he jumps in a tank with the Sapper, able to not only drive it, but also fire the main gun for maximum effect. 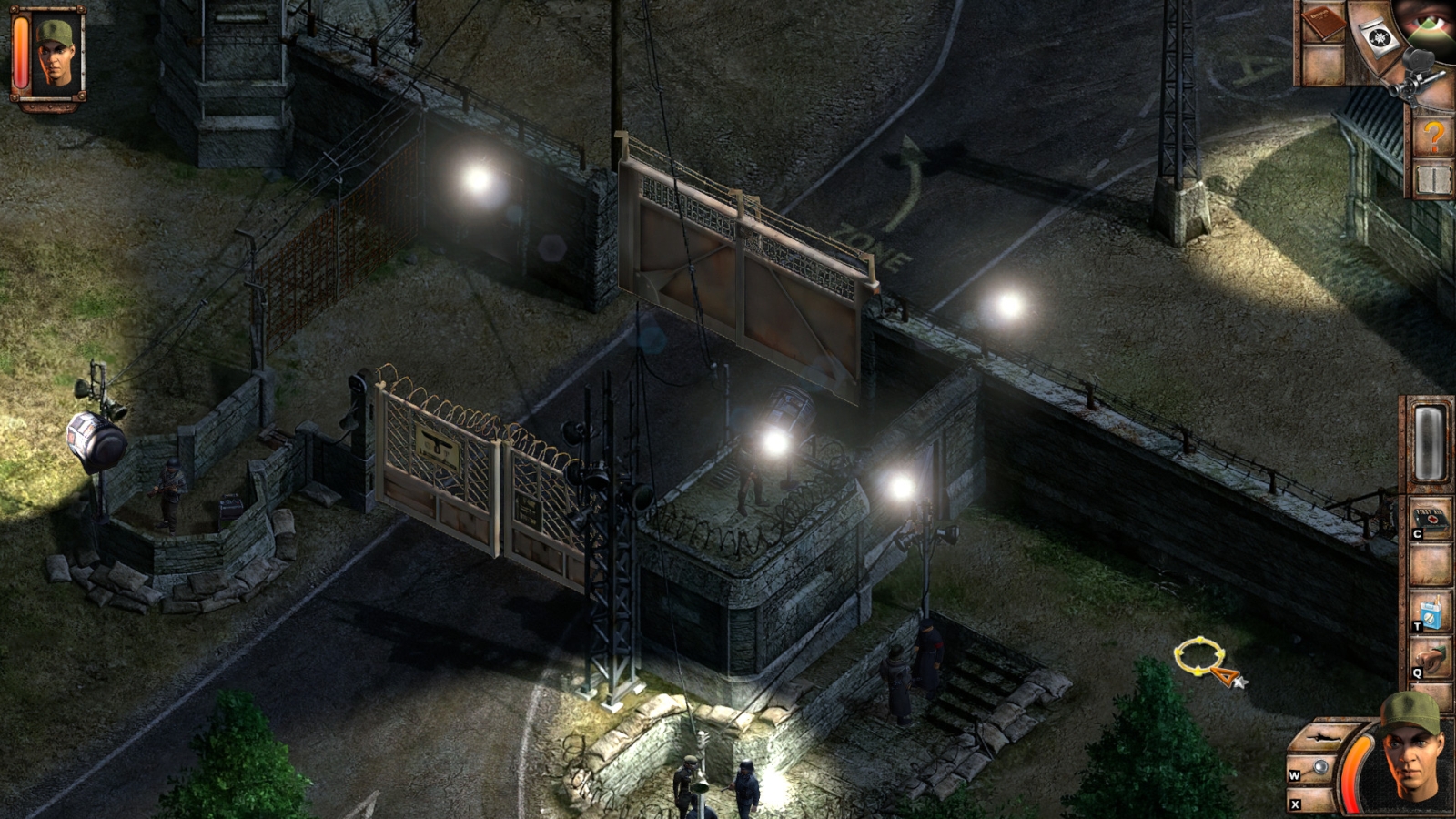 The front door is not the wisest approach.

Speaking of the Sapper, he’s your explosive expert. Able to deploy a timed explosive, lob grenades, use anti-personnel and anti-tank mines, fire a bazooka, use a blowtorch to open metal doors, and even use a flamethrower.

There are several more characters that I don’t want to spoil as they are as much fun to discover as they are to use. The real challenge is that all of the equipment I mentioned above must be procured on site. That is to say, you may deploy with a few decoys, a knife, and a minesweeper, as an example, but you’ll have to carefully search the environment to find everything else. There is no set way to beat Commandos 2, meaning the locations are yours to discover and tackle how you see fit. Maybe you quietly take out everyone, searching through every nook and cranny. Perhaps you are more direct, leaving as small a trace of your presence as possible. I’ll tell you this much for certain, however — this is not a run-and-gun game. 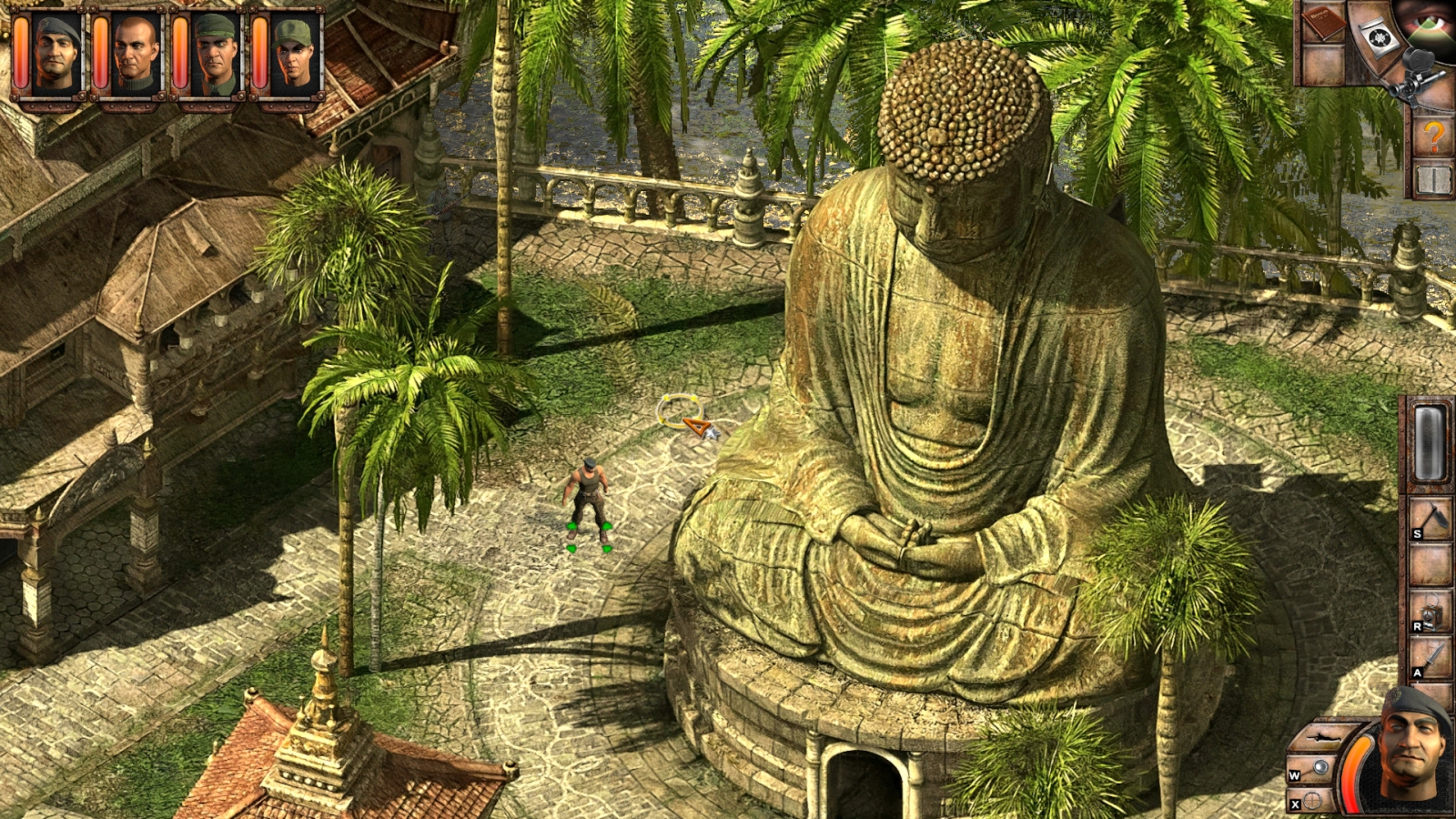 As the original Commands 2 was one of the first games of this type, the controls were anything but standard. Clicking on a character was accomplished with the right mouse button, with the left button acting as a ‘commit’ button, moving the camera was handled with arrows or moving your mouse to the edge of the screen, and rotating the camera was done by holding ALT and pressing the left or right mouse button to turn it in that direction. Controls have come a long way since 2001, but occasionally Commandos 2 still comes across as obtuse. Thankfully, the Yippee! team has also added the ability to remap all controls as you see fit. Still, that moves the needle from “painful” to “tolerable”. Even as a veteran of the series, I still found the controls to be serviceable at best. By way of example, having to remember to hold down the ALT key to rotate the camera when Q and E is fairly standard nowadays can mean you accidentally pull out a gun or take off a uniform when what you meant to do is spin the camera. Additionally, despite moving the game to the Unity engine, the camera can only be snapped 90 degrees, instead of letting it move naturally.

There is one really strange omission that made me reload the original to make sure I wasn’t remembering it incorrectly. For reasons I cannot explain, all of the Nazi swastikas and even the Japanese rising sun flag have been removed from the game. Instead you have bizarre red flags with nothing on them, and planes with no markings. I mean, this is a game about the second World War — I don’t think you have to be a historian to figure out which side is which, so this sort of whitewash is just pointless. 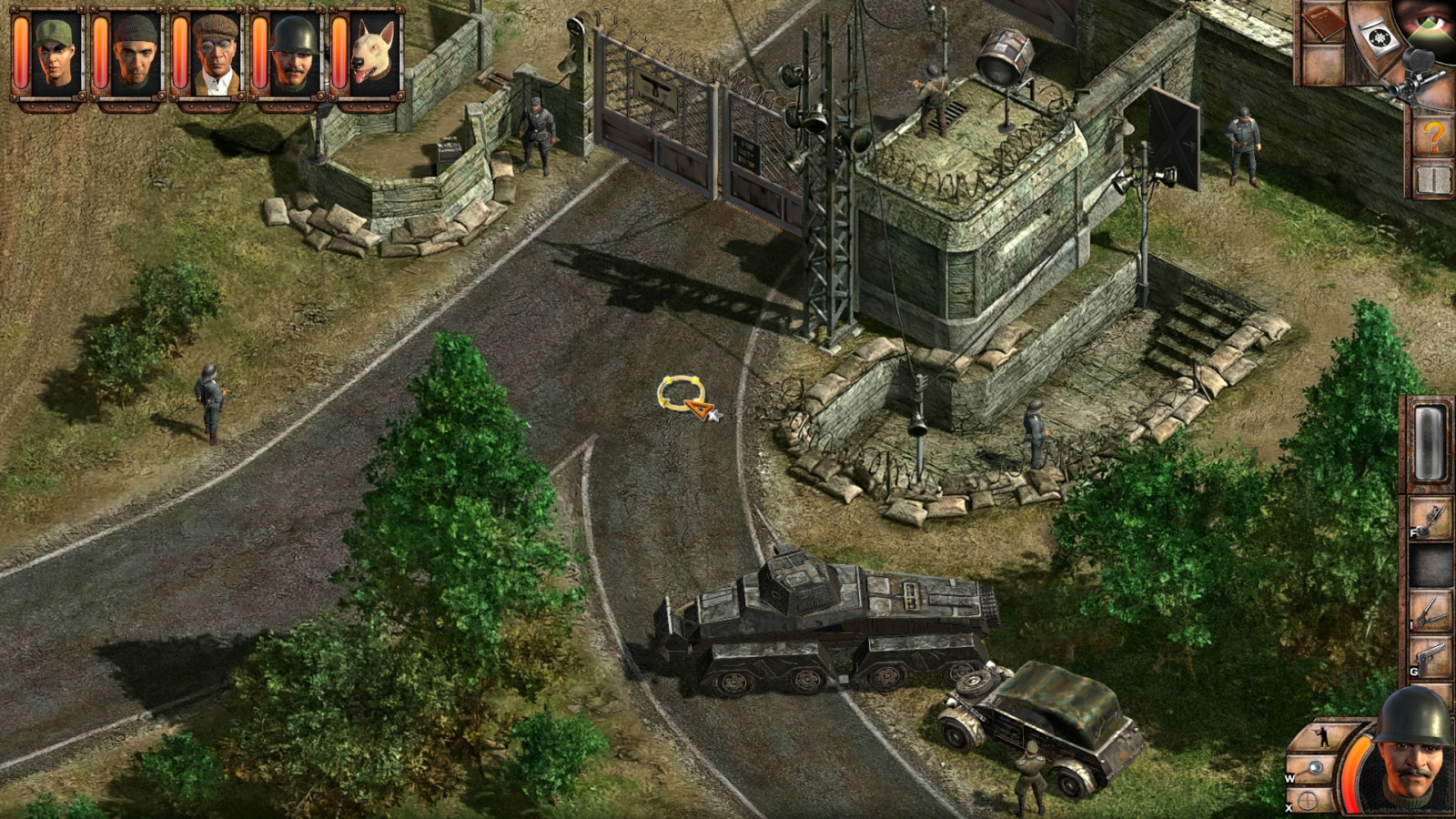 Soldiers are dangerous, but vehicles are downright lethal in any circumstances.

The big hitch with Commandos 2: HD Remaster is honestly the bugs. The game is released, but still marked as “Beta”, and as such there are still some hiccups that will hopefully be hammered out shortly. I’ve had my soldiers in an overwatch state ignore the enemy, and vice versa, I’ve had enemies spot me, rush over to where I am, and then be struck with amnesia, walking back to their post as if nothing had happened. I’ve also ran into clipping issues, and a few crashes. These sorts of bugs have been acknowledged by the developers, so they are likely to be ironed out soon, but at launch they are a problem.

Commandos 2: HD Remaster graphically upgrades a beloved tactical classic and gives a fresh coat of paint to a fairly obtuse set of controls. While it is shipping with a few bugs, all of the pieces that made this game a classic are present and accounted for. With just a little more polish we’ll be able to “Consider it done, boss”.

Ron Burke is the Editor in Chief for Gaming Trend. Currently living in Fort Worth, Texas, Ron is an old-school gamer who enjoys CRPGs, action/adventure, platformers, music games, and has recently gotten into tabletop gaming. Ron is also a fourth degree black belt, with a Master's rank in Matsumura Seito Shōrin-ryū, Moo Duk Kwan Tang Soo Do, Universal Tang Soo Do Alliance, and International Tang Soo Do Federation. He also holds ranks in several other styles in his search to be a well-rounded fighter. Ron has been married to Gaming Trend Editor, Laura Burke, for 21 years. They have three dogs - Pazuzu (Irish Terrier), Atë, and Calliope (both Australian Kelpie/Pit Bull mixes).
Related Articles: Commandos 2 HD Remaster
Share
Tweet
Share
Submit